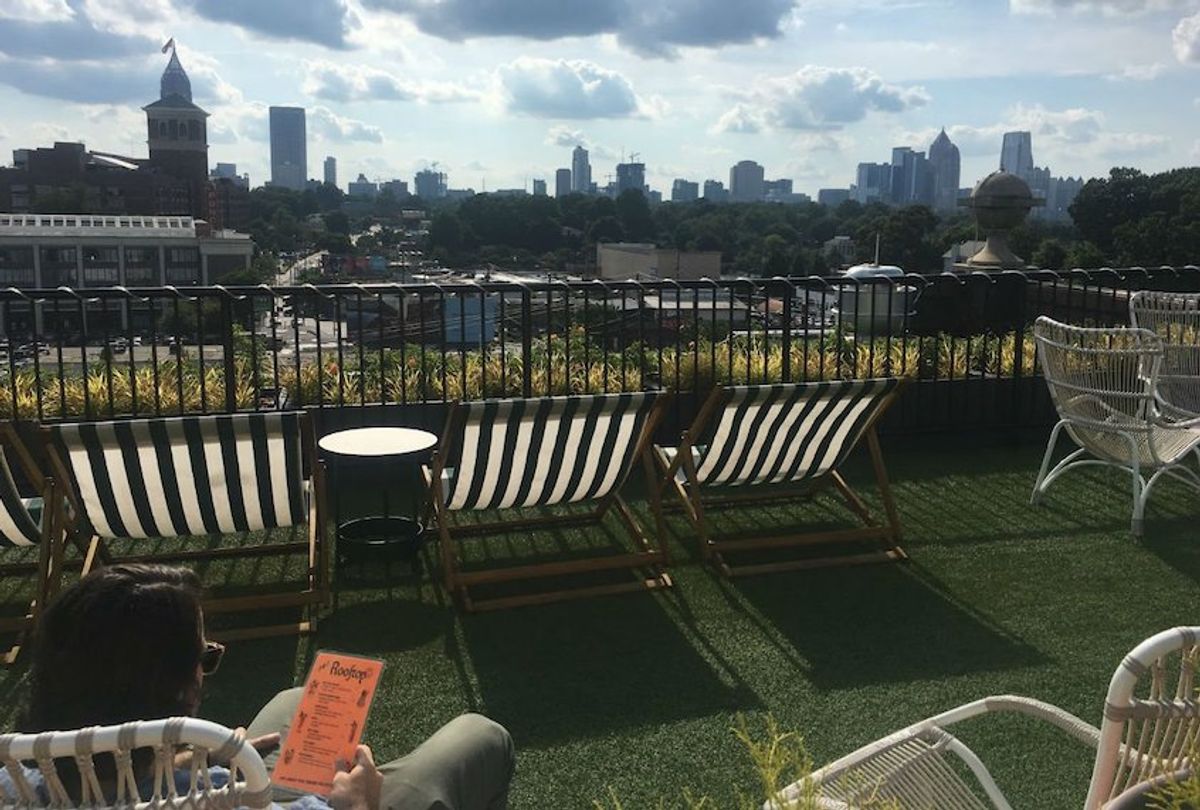 ATLANTA, Georgia — I write this from the lobby of Hotel Clermont on a dreary Sunday, the day after Atlanta United won the city’s first sports championship since the Braves took the World Series in ‘95 — and while the Falcons are taking a beating in Green Bay. That’s Atlanta, a mash-up of curse-breaking nights followed by defeating days, Civil Rights landmarks in the shadows of towering construction cranes, film industry sound stages dappling the last of the un-gentrified historic neighborhoods, and bustling urban trails along abandoned railroad corridors. New life springs up here, but the old roots flourish, too. 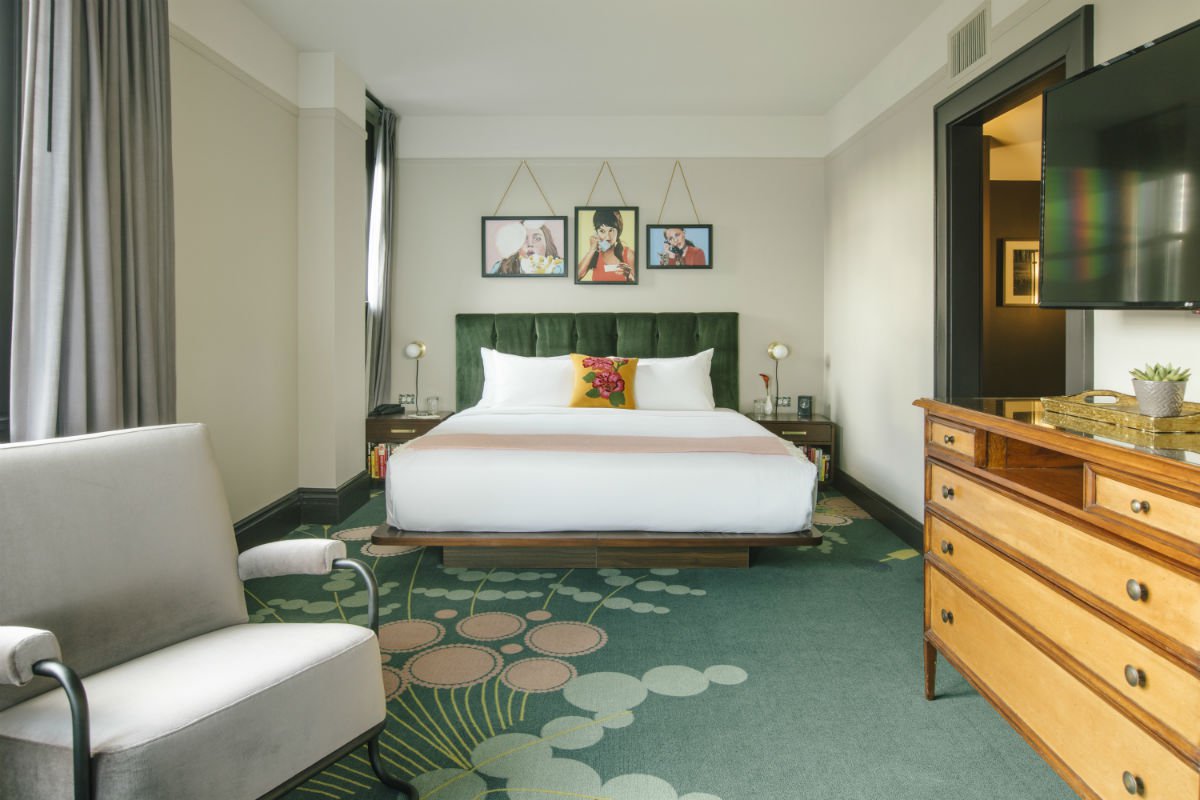 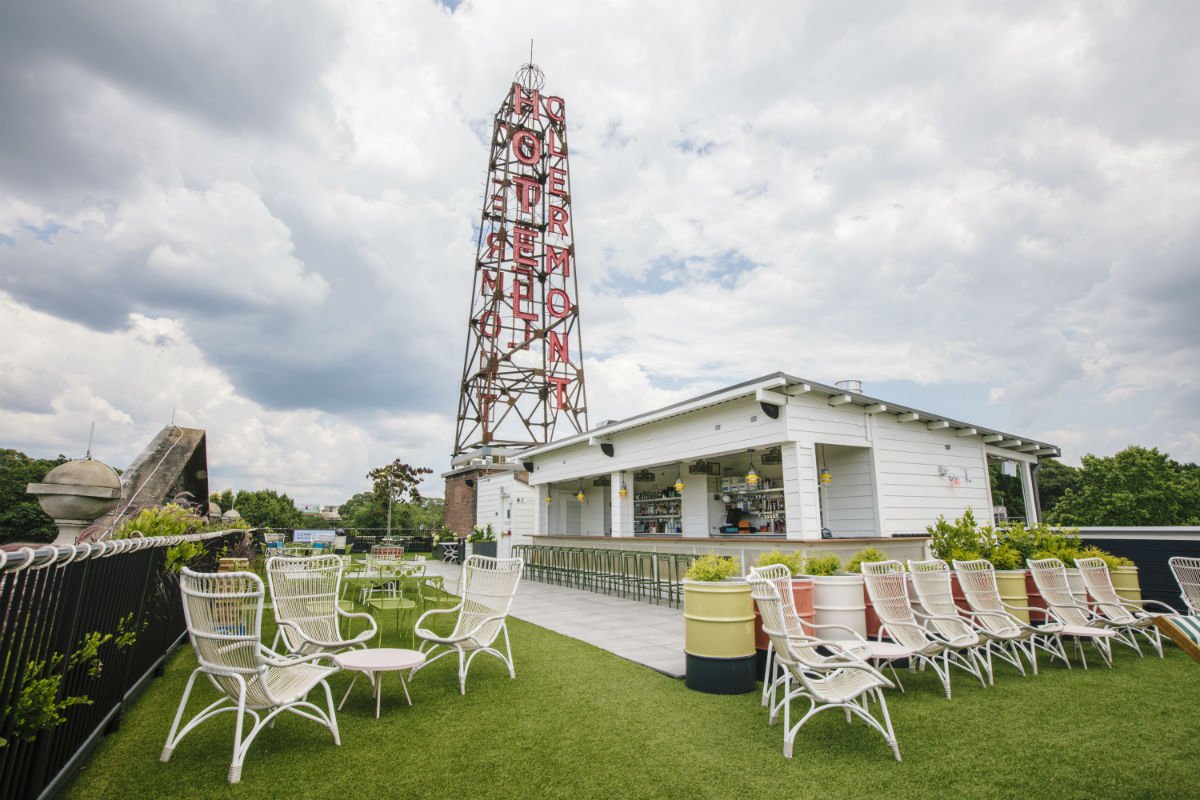 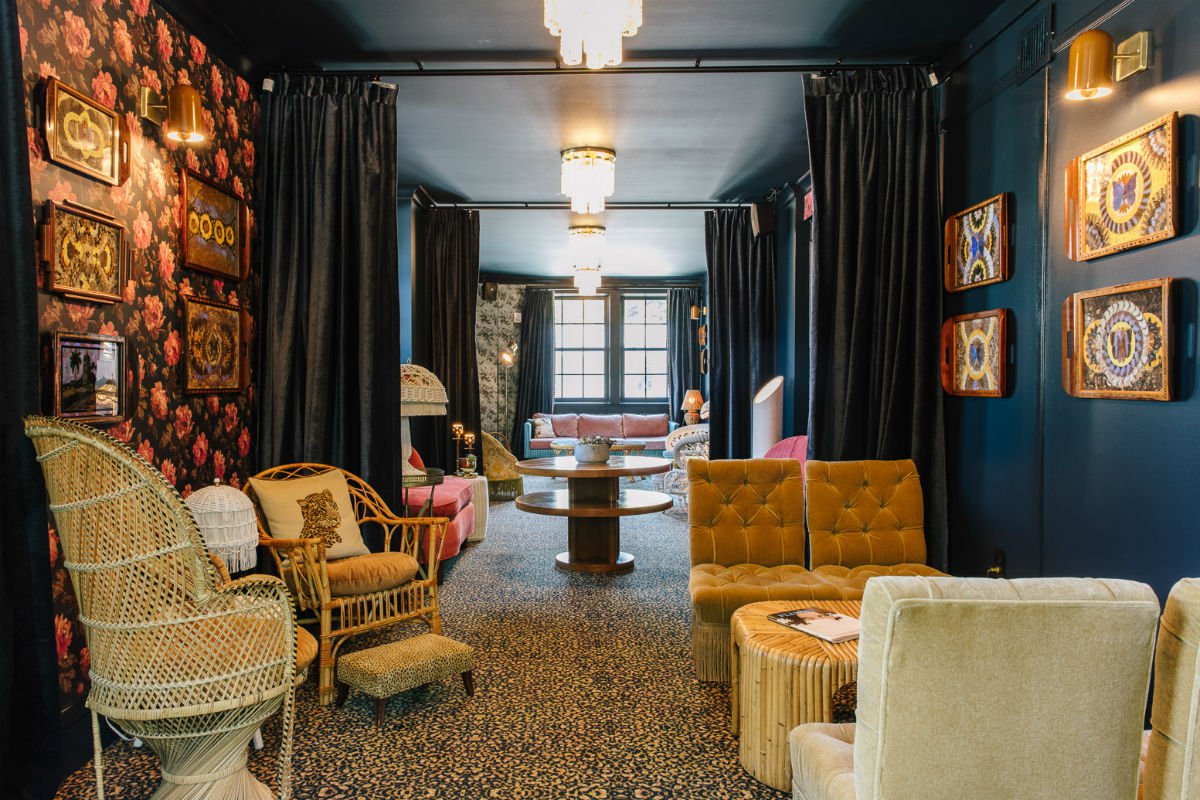 In Atlanta, it’s “on with the old, in with the new.” What better example of this than the revitalized Hotel Clermont, a boutique hotel built atop the city’s first and longest-running strip club, the Clermont Lounge. Down to the restaurant’s dinnerware, the city’s buzziest opening of the year pays homage to this Atlanta icon. My husband and I spent a staycation at Hotel Clermont one Friday night. We checked in (just a mile from our very first apartment in Atlanta) and spent the evening working our way from the rooftop bar to the downstairs French-American brasserie, Tiny Lou’s, with stops in between to gawk at the pink velvet and rattan furniture, custom peach motif wallpaper, and Lobby Bar cocktails. The Hotel Clermont sits at the nexus of three neighborhoods: Old Fourth Ward, Midtown and Virginia-Highland, and it anchors my itinerary for the best day ever in Atlanta.

Walk to Three Heart Coffee Roastery located in the back corner of eclectic multi-vendor market Paris on Ponce, facing the Eastside BeltLine trail. Three Heart is from the team behind 8Arm, which formerly had the neighborhood’s best daytime cafe that’s since been turned into a cocktail bar. Grab a take-away coffee (and maybe some beignets) at the walk-up window, and head south down the BeltLine, the city’s main artery of multi-use trails, to Krog Street Market for breakfast — about 1.5 miles. 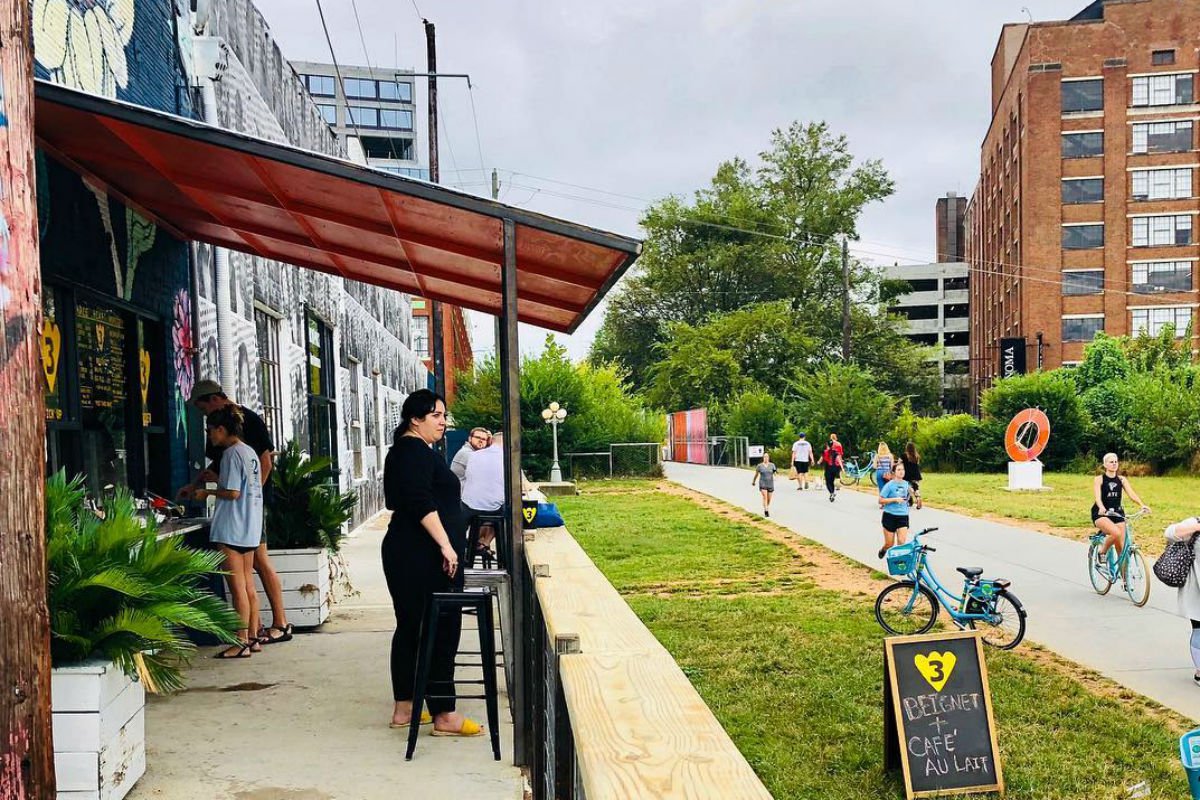 Wait in line for an au lait and beignet. Photo courtesy of Three Heart Coffee Roastery. 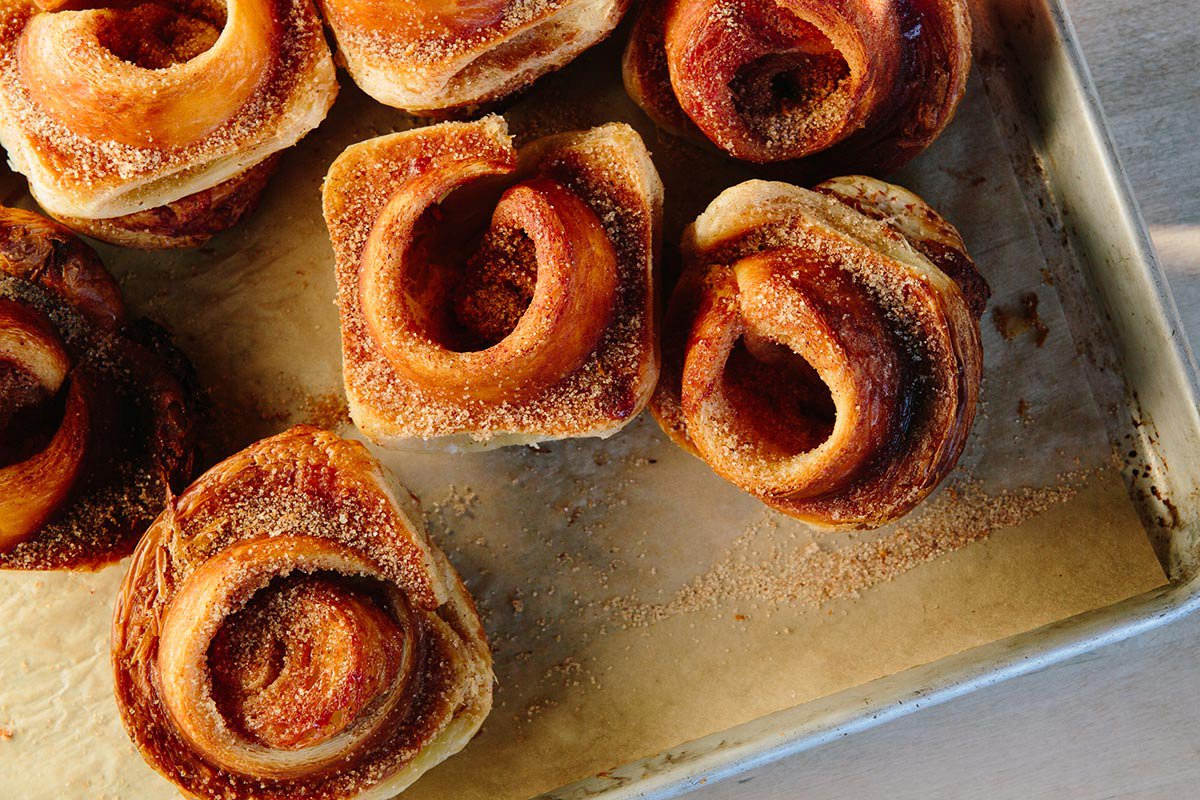 When the BeltLine crosses Irwin Street, you’ll see Krog Street Market to your left, which I think of as the smaller, twin sibling to Ponce City Market (both of our food halls that opened in 2014). Fun fact: Before it was Krog, the 200,000-square-foot warehouse housed Tyler Perry Studios. One of Krog’s very first stalls was The Little Tart Bakeshop, the bakery’s second outpost in town. The best pastries in Atlanta — rich gougères, ginger scones, the flakiest butter croissants — are at Little Tart, which gained its loyal following from years of farmers’ market pop-ups. The Little Tart serves Counter Culture coffee if you’re ready for a second (as I always am), and don’t forget to pick up a croissant lapel pin as an Atlanta souvenir.

Take a lap around the market, then check out some other favorites in the neighborhood like The Spindle, a brother-owned retailer specializing in custom bike bags and gear with a cafe and kitchen in the rear, and The Collective artist cottage that shares its space with Southeast Succulents' garden shop. 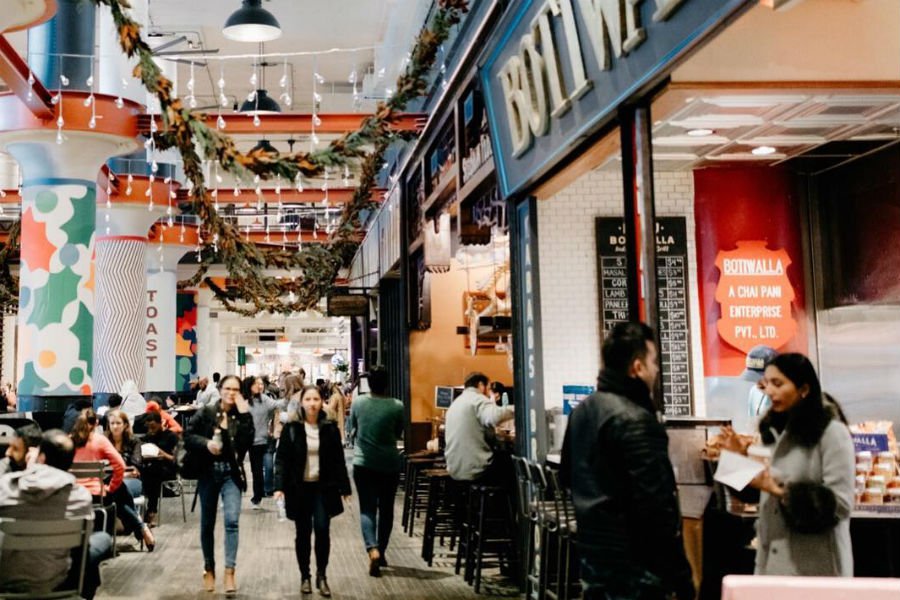 The buzz in the hall. Photo courtesy of Ponce City Market. 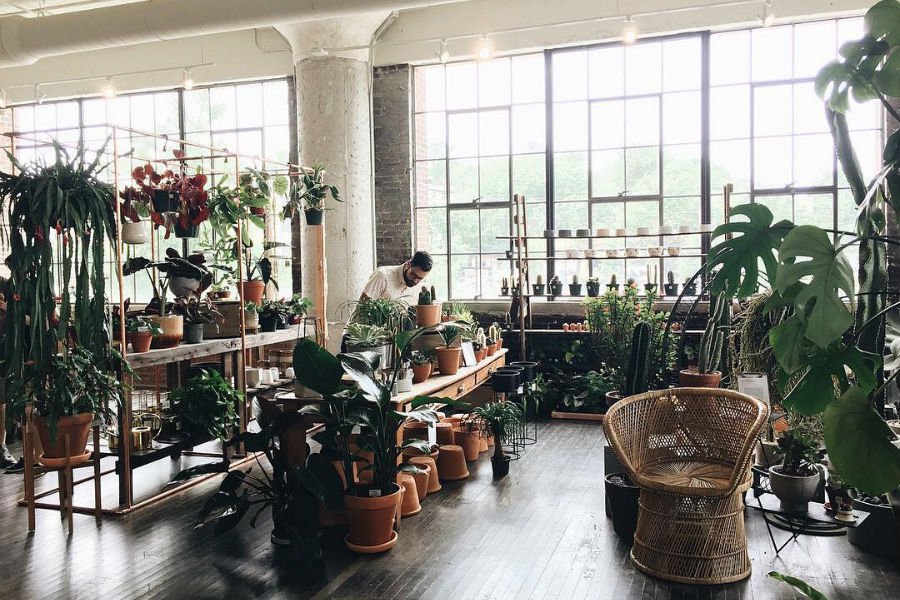 Head back toward the Clermont and wander Ponce City Market — Atlanta’s crown jewel with chain retailers, food stalls, and native sons like Citizen Supply. If you’re getting hangry, you'll find options, and if you still have retail therapy to do, head to Paris on Ponce where you started this morning. I’ve bought some of my favorite home goods here, including vintage thermoses, jadeite mugs, and two club chairs for my office.

Ponce City Market restaurants can get crowded. For a change of pace, head to any of these casual spots within walking distance: La Fonda for pork tacos and Cuban sandwiches, gusto! for healthy-ish and insanely kind service, or old-school institution Eats for meat-and-three entrees like jerk chicken and slabs of chicken lasagna.

From Ponce area, you might be ready for a nap back at the Clermont (no shame), but why don’t you power through and head to Piedmont Park? This time, go north up the BeltLine. The 200-acre green space in the middle of the city was designed in the early 1900s by the renowned landscape architects the Olmsted Brothers. The back trails of Piedmont Park along Clear Creek will transport you out of the urban sprawl, as will the nearby Atlanta Botanical Garden, but you can get right back to it with a few beers at Orpheus Brewing or smoothies at Sean’s Harvest Market, both on the fringes of the park. 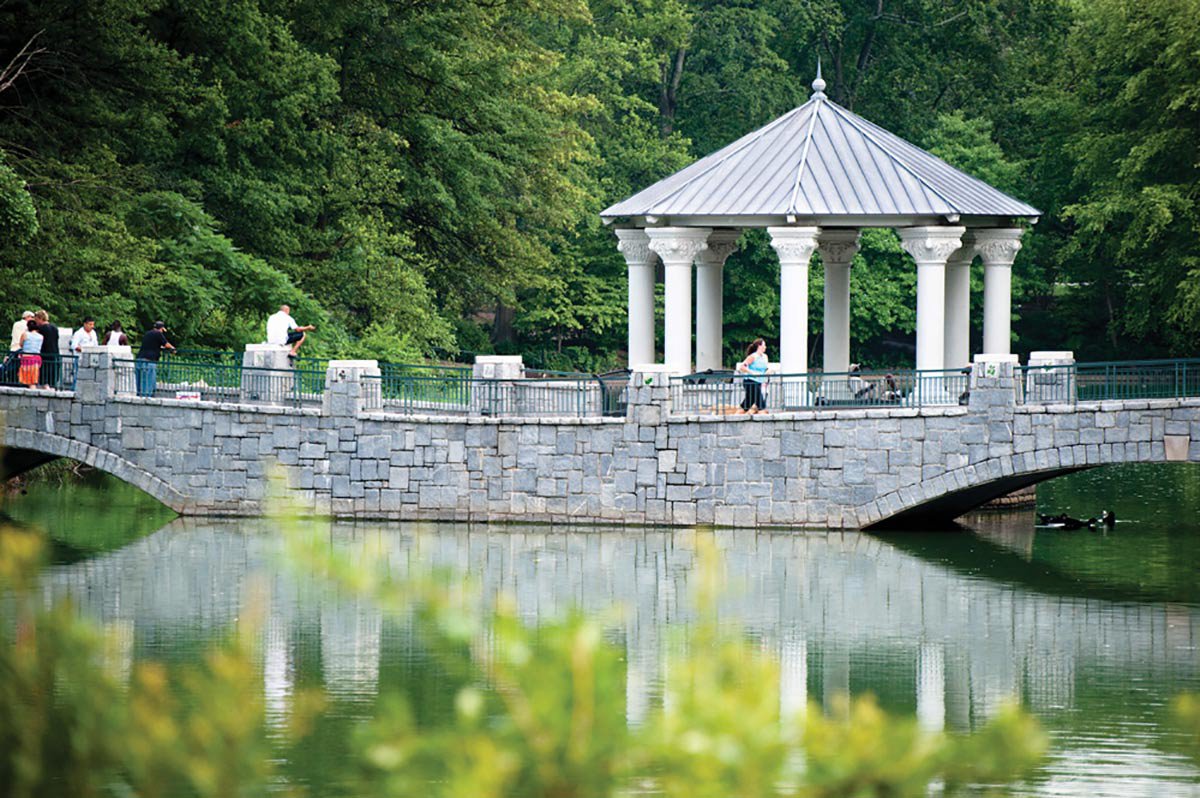 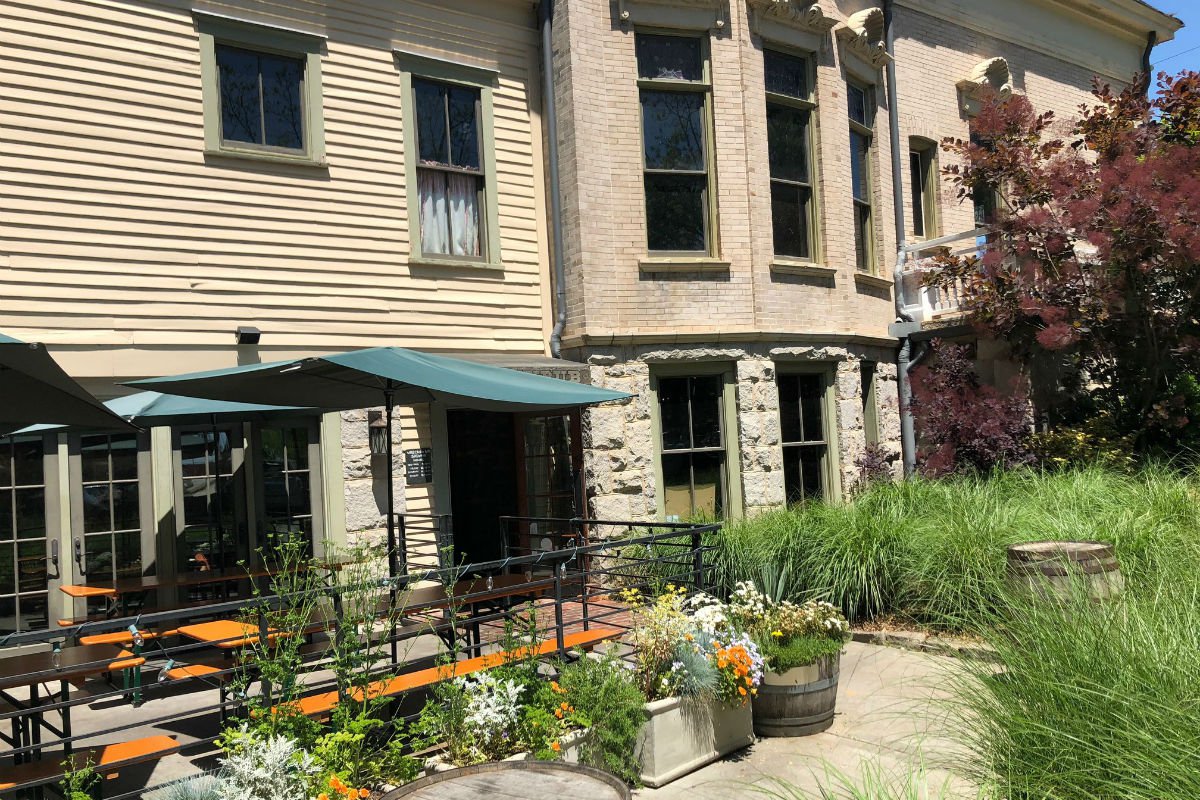 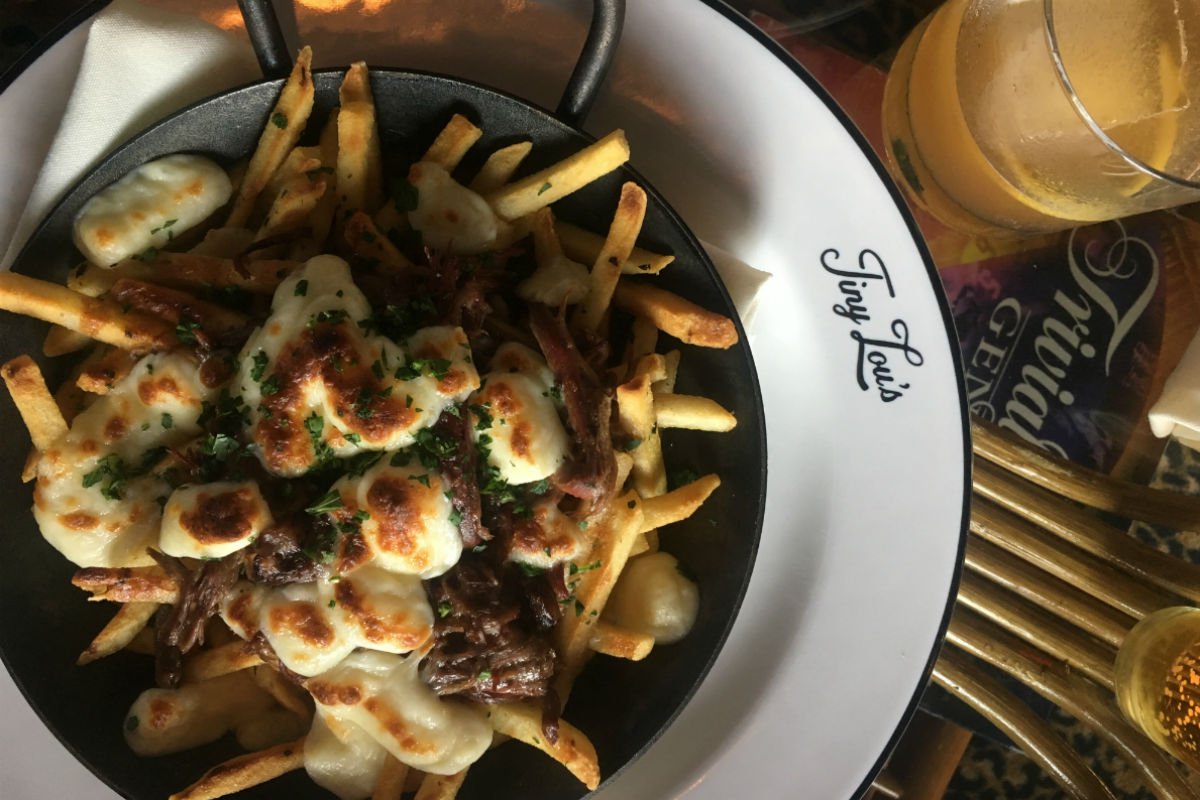 Do not resist late-night poutine. Photo by Kelsey Burrow. 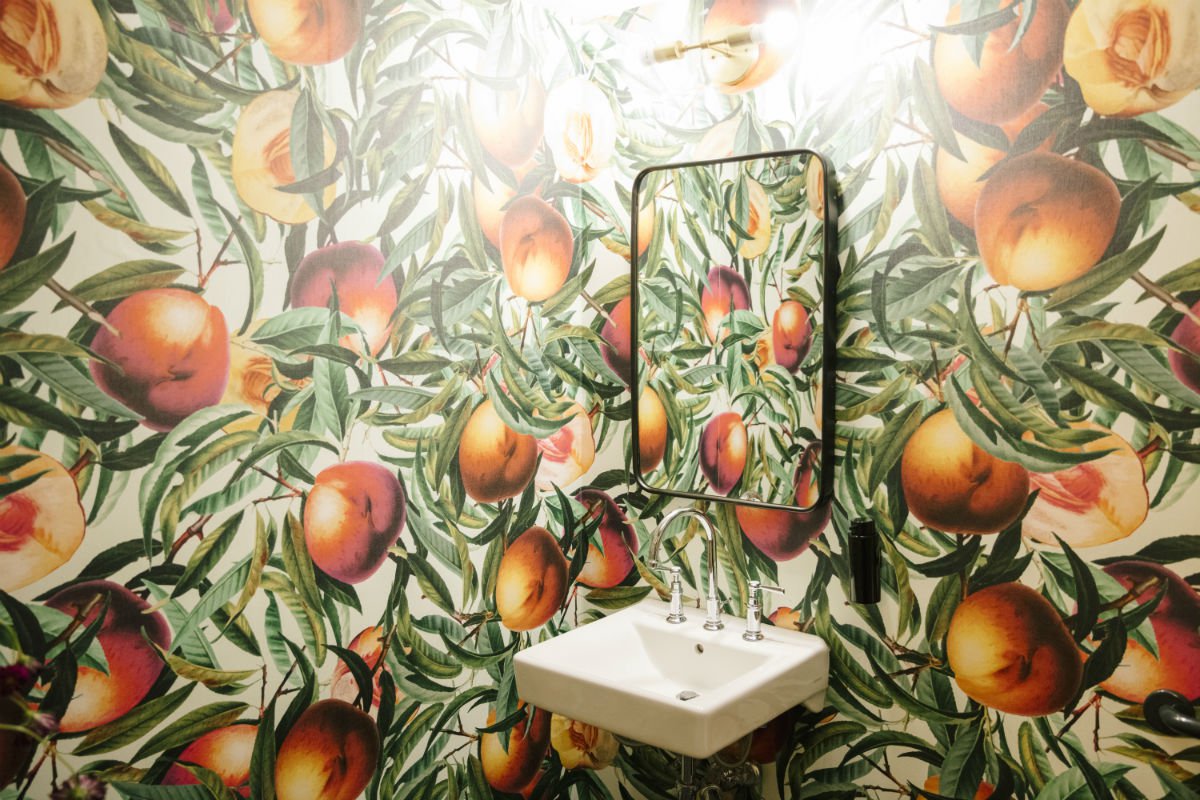 When I think of my best nights in Atlanta, they usually take place at Wrecking Bar Brewpub. If you’re looking for the trendiest, newest, hottest spot in town, this ain’t the place (and I’m not your girl), but to me, Wrecking Bar has it all and is one of the most highly underestimated restaurants in the city. Being the basement level of a Victorian home, Wrecking Bar has optimal coziness factor with stone walls that give it a cavernous vibe, plus rafters and a 360-degree bar. The food is thoughtfully sourced, playful, always interesting, and always different. One night on the patio, I had a Gulf Coast shrimp toast that changed my life, and I’m never not craving their meat & three steak salad. And the beer! I’m a fan of the ol’ standby, their Breaking Bob Kolsch, but Wrecking Bar is known for its funky fresh brews like the Resting Beach Face Passionfruit Saison or the high-grav Maltlanta Doppel Sticke.

9 p.m. — Nightcap or Just Getting Started

Yes. The answer is always “yes” to a nightcap. And in Atlanta, there’s no place like home, back at the Hotel Clermont’s Lobby Bar, that is. Grab a seat in the alcove amid the floral wallpaper, tufted velour sofas, wicker furniture, and mounted butterflies. It's the kind of decor that makes you smile because, well, it’s just that weird. When your waiter arrives, let yourself be dazzled. They will talk you into the poutine — or “pootie tootie” as our waitress called it — and you should let them. Browse a 1968 Playboy, and relax. This is supposed to be a perfect day after all.

Once you’ve licked up the gravy, tipped back that last drop of your Negroni, and charged your bill to the room (like it never happened!), you must decide: to wander upstairs, or down, where the ladies dance? At the Clermont, you can’t go wrong.