What Joan of Arc would have known about #MeToo 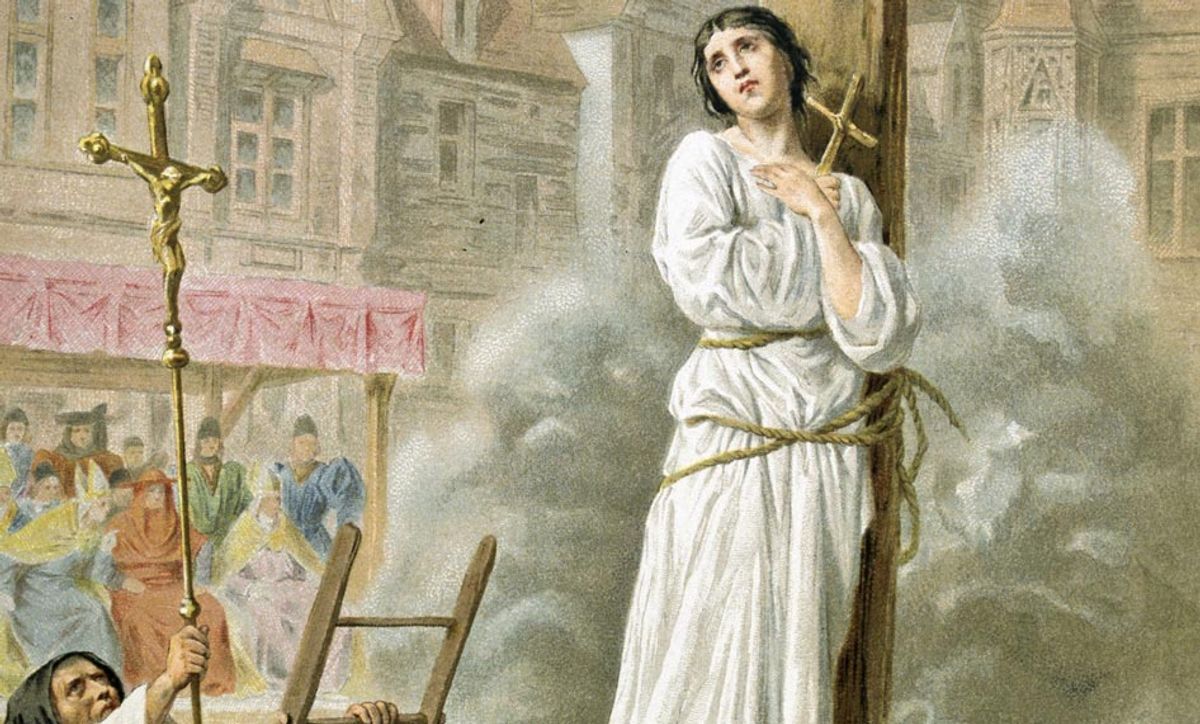 Joan of Arc burned at the stake. (Getty/Photos.com)
--

In 1452, the monk Jean Massieu, who was Joan of Arc's confidant in her last week in the dungeon, testified that she told him she had been raped by "an English lord." In 1456, he changed that testimony to "almost raped."

I probably would have, too. It is painful even today to imagine some thug, rich and yes, literally entitled, coming in and attacking a girl in chains.

Though then, as now, it made sense, politically. On the one hand, Joan of Arc the hero on her white horse had beaten the English in battle as a mystical virgin. On the other, Joan of Arc the 19-year-old girl could be reduced and injured and assaulted like any other woman in the town of Rouen that day.

This rape or "almost-rape" took place in the last few days of her life. She was in a state of despair, having faltered at her first sight of the stake and finally, after a year of captivity and five grueling months of trial before a kangaroo court of enemy French churchmen, recanted. She denied her saints. She renounced her deeds. She allowed her captors to shave her head — her signature "men's haircut" — and to replace her fighting trousers with a submissive skirt.

Her trousers, she'd pled all through her trial, were her protection. "You keep me in a dungeon, alone, among brutes," she had cried. But the churchmen had refused to listen. Quoth, instead, like one-note ravens, the laws laid out in the Book of Deuteronomy, from the 7th century B.C., as proof that her pants and hair were an "abomination."  They denied her communion, mass, anything that might have comforted her. And still she held firm, until they took her to the stake.

And then she made a desperate grab at saving her own life. She was promised a church prison instead of the dungeon, with a woman warden. She submitted, in great spiritual agony, and gave up her trousers — which is to say, her persona as Joan of Arc.

But there was no possibility of saving her own life, not with her English enemies and their French-poodle priests intent on her death. Nor, it turned out, could she really give up being Joan of Arc, the greatest hero of her day. As long as she lived, she was still powerful, though the young girl, alone in chains in the dungeon, no longer felt it then. But the English did, and some unnamed English lord must have decided to try the standard remedy against female power. Maybe he even wondered why it hadn't been effected till then.

So did he or didn't he? Massieu, our witness, claimed to have gotten his story directly from her. "Raped," he said first. "Almost raped," he said later. But how could it have been "almost raped," when there was no one there to protect her? Her guards were English brutes who hated her on principle, had to, the way the guards in Auschwitz had to hate their prisoners just to do their jobs. Those English guards in the Rouen dungeon would neither have defied "an English lord" nor helped a girl they saw as their enemy. So how "almost raped"? We can hope, but not conclude.

Either way, though, even if it was just somehow, by some miracle of coincidence, the arrival, say, of some higher lord who could have interrupted the attack, called off the dog, it was "almost," I would still put the hashtag and add a "too." Because she was attacked for the same reason that boys gang-rape girls at fraternity parties on U.S. campuses, and it has nothing to do with sex and everything to do with power. Taking power. Stealing a girl's persona. Her essence. Who she is. Her smile. Her sense of self.

Joan of Arc didn't mention this incident when she reclaimed her own power and went back to the stake. But we are mentioning it today; and she would have been with us. Were she alive now, she would be part of Me Too. She would stand up to the Supreme Court justices and the raping priests. Anyone who tries to use his physical strength or position of power to dominate, humiliate, destroy.

Joan of Arc would have understood and been there. Maybe she is.

Victoria Shorr is the author of the new nonfiction book "Midnight: Three Women at the Hour of Reckoning," a study of Joan of Arc, Mary Shelley and Jane Austen. Her first novel, "Backlands," was named one of Booklist’s top-ten first novels of 2015.