A mother's letters to her son in prison: Jesse Jackson Jr.'s mother wrote him every day 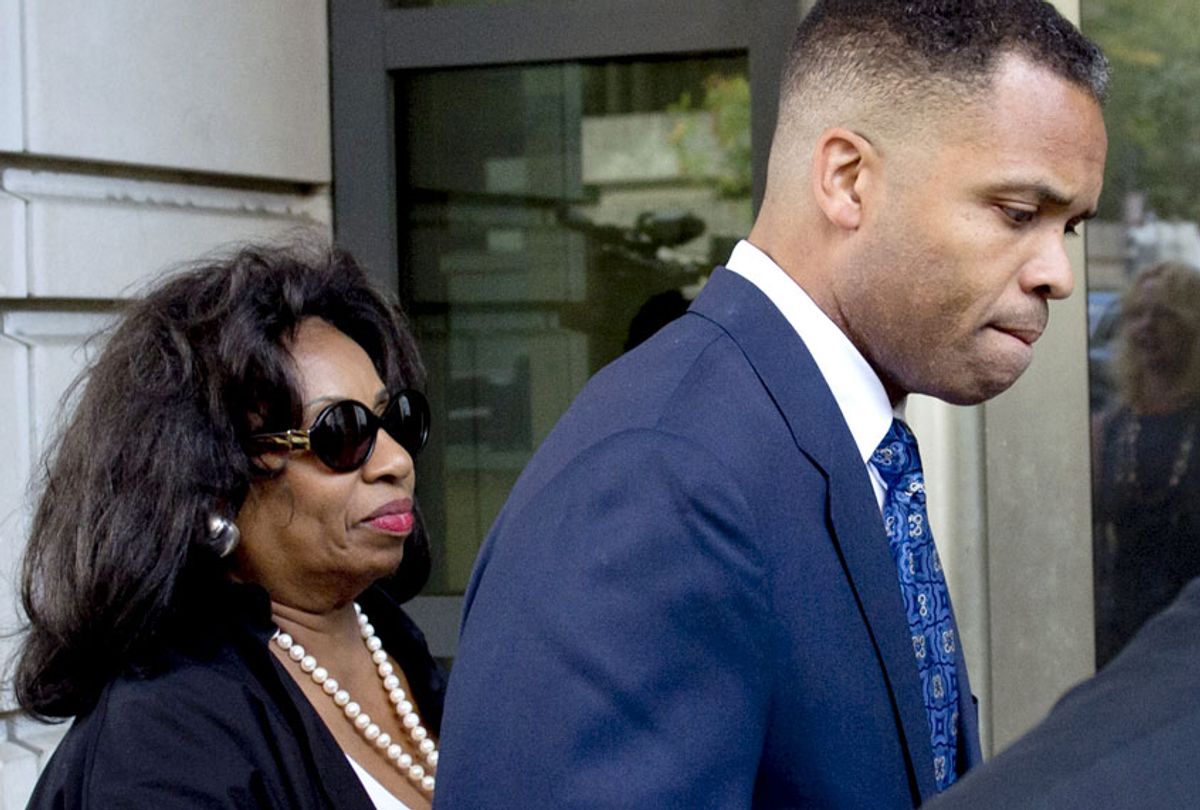 Excerpted with permission from "Loving You, Thinking of You, Don’t Forget to Pray: Letters to My Son in Prison" by Jacqueline L. Jackson. Copyright 2019 by Arcade Publishing, an imprint of Skyhorse Publishing, Inc.

Jacqueline Jackson promised her son, Congressman Jesse L. Jackson, Jr., that she would write him every day during his incarceration in federal prison to serve his 30-month sentence. She kept her promise, and a selection of her letters are now collected in her new book, "Loving You, Thinking of You, Don’t Forget to Pray: Letters to My Son in Prison," with an introduction by Congressman Jackson.

Inspiring, moving, frank, and sometimes funny — with glimpses of such figures as Nelson Mandela, Winnie Mandela, Mayor Marion Barry, and of course, Reverend Jesse L. Jackson, Sr. — her letters comprise a powerful act of love, nurturing and ministering to her son's heart, health, and mind and maintaining his essential connection with home. They also serve as a blueprint for why we have to support our families not just as they elevate but when they fall. She provides the road map for ensuring that the individuals serving sentences understand that prison is where they are, not who they are and for helping them sustain the courage to keep hope alive.
* * *

I spent the day at the office clearing some of the debris. I try to give your dad a hand. You made the right decision to not permit him to go with you that Monday. Courtney called Yusef and said something about a debt? I told him I will pay it, or he can.

Rev went to Springfield at 1 o’clock today to lead convocation or open this session. He will return tomorrow.

He broke the bed flopping down on it. I have asked him repeatedly not to fall down into the bed; he never listens. James and I rebuilt the frame. Jo Bridges called. I am sending her your address. She wants to write you once a week, she said.

I was told John Johnson owned the entire block his building was on and his daughter has sold each building one at a time. Now she is renting two floors in the building across from the museum with the two lions on Michigan Avenue.

I think I told you someone broke the window on the Smart Car; coming in tonight, I found the stick they used. It appears to be a leg from a chair. I will write tomorrow.

I hope your spirit is high and you are reading the scriptures I share with you. Things are okay, but it is very cold.

I shopped for groceries today; at least 9 strangers asked about you. At least, I believe, 7 were sincere; the others just wanted to have something to talk about. They also expressed, repeatedly, their unhappiness with your situation. Jo Bee called to cheer me up, but started to cry for 15 minutes. She said she just doesn’t know what to do; she wants to see you. We both have friends nearby; she wants me to come down, stay with them, and then come see you. That’s a lot of time.

Many are angry. Especially when the Congressman in Florida was caught, and I was told by media, taped purchasing over $200.00 worth of cocaine — and was given probation and allowed to keep his seat, while others are serving time for doing the same thing.

Several people have called to tell us of a Congressman who sent his daughter to college with his campaign fund and is still sitting comfortably in Congress.

Others are allowed to pay back millions of dollars to the government after causing the loss of people’s pension, homes, jobs, and for many, their quality of life. Yet when Yusef asked that we — or you — be allowed to pay back the fund to your campaign, which you raised, we were told NO!

It is sad to know many of us are witnessing the disparities between rich and poor, upper class and underclass, those on the inside and those on the outside.

The very worst that has happened in our alleged civil society is hunger and homelessness.

To close schools, knowing children go there to get a hot breakfast and lunch with no other food options is by far the most inhuman act I have heard. Curses, curses, curses on all who have participated in this heartless act.

I thank God for the many information networks . . . the truth is becoming clearer & closer.

It’s called the God Factor. When there is a gap, God will step in.

The scripture says God is not the author of confusion. And the thief comes to steal, kill, and destroy; but God comes so that we may have life and have it more abundantly. And if life has not the abundance of food, clothing, shelter, truthfulness, love, and peace, it is not of God.

Now some clarity for you . . . I love you today more than I did the day you were born. When I think of you, I smile and my heart is warmed. God protects you and loves you.

You broke man’s rule, which man calls the law.

When I lived in Fort Pierce, Florida as a child, the police would come to the houses of blacks and they would shout, “Open the door in the name of the law!” as they kicked in the door — without a search warrant. They were all white. “The Law” was segregation, discrimination, and any act of intimidation that helped to maintain low achievement and low aspirations. These rules helped create “laws that maintained the status quo,” not justice, not fairness, and certainly not peace — but business as usual.

I saw this, you didn’t. I am not deceived. I don’t want you to be confused about rules & laws. God has Law, man has rules . . . Only a perfect spirit can create Laws.

As a child I was taught, “In all that you do, remember the Golden Rule: ‘Do unto others as you would have them do unto you.’” This is God’s Law that man has made into a rule.

Have you ever seen the implementation of this Rule/Law domestically, internationally, politically, spiritually, etc.? No, you haven’t!

We don’t teach that Law anymore. It is too perfect and Godly.

If God’s Law prevailed, a man could not shoot a child — an unarmed child — in cold blood and leave the courtroom exonerated, with his pistol at his side. The man in Detroit shoots a girl child in the face, while she’s on his porch seeking help, and only the public’s outcry is cause for a potential investigation. In Florida, a football player seeking help because his car broke down, is shot down by police. I can go on and on. We are functioning by man’s rules and everything is upside down. Man is imperfect; he can’t make Laws, only imperfect rules.

Jesse, God will prevail. I want you to examine God’s Laws and stay with them. My mother would say, when she would whip me and I would scream, “You’re gonna be glad I am whipping your—instead of God.” I didn’t understand until I received a couple of beatings from God.

Now, to tell you the truth, of my mother’s whippings I remember my screams; of God’s beatings I know “the why,” and I still feel the pain.

All we like sheep have gone astray; we have turned every one to his
own way; and the Lord hath laid on him the iniquity of us all. — Isaiah 53:6 (KJV)

All the world today is Mandela! I am happy he has made it into that place in history for those who have made the greatest sacrifice of selflessness. To lay down one’s life for his fellow man . . . is the greatest deed.

You realize how long I have been angry with Mandela for leaving Winnie; but after the Frontline piece, I am even more sad.

I saw Winnie today—her demeanor was unrecognizable. The Winnie I have known through the years has always been poised, with zeal, passion, and self-assurance. She always radiated a level of confidence that was contagious and electrifying. This morning when I saw her, my heart hurt for her. She appeared defeated and confused.

I felt her loss to be greater than just Mandela’s death, but that and the death of their togetherness.

The Frontline story spent time discussing their relationship, which helped me understand his dilemma.

The documentary said the relationship was strained because of her infidelity. It seems while he was in prison, there were rumors; and Mandela had defended her honor as best he could.

I had excused her behavior because he was jailed for life. A life sentence should allow some exceptions.

Then, here is another dilemma. If Winnie believed the movement would be victorious, then would her conduct reflect a wife anxious for her husband’s return or release?

That, in itself, created conflicting messages to the people. For a while, she stopped visiting Mandela at the prison. When he was released, she continued her behavior. The final straw was a visit to the USA: A tour that he pleaded with her not to take. The report said, “He begged her not to take.”

He, Mandela, called the hotel late at night and the man she was accused of seeing answered the phone. Then all hell broke loose. Mandela left her after she pleaded with him not to.

Now my opinion was shaped by the interview I saw one night. Winnie said, “My husband has forgiven all those who have hurt our people, yet he has no space in his heart to forgive me.”

Her words shaped for me a very negative opinion of Mr. Mandela. However, upon learning this new information, I don’t see how he would have maintained the respect of his peers with such an uncontrollable situation.

I now understand what he did. Otherwise, his effectiveness would have been diminished.

Now, I regret having judged him. Winnie’s strength, and her independence, began to weaken his and her purpose.

Mr. Mandela was in prison for 27 years without contact with the outside world. Mrs. Winnie Mandela was his voice.

History must say it was her guidance and leadership that lead to the freedom of Mandela and his country.

Only God can take a crooked stick and hit a straight lick.

My thoughts are always with you,