She's building a legendary career to rival the Fab Four's, too 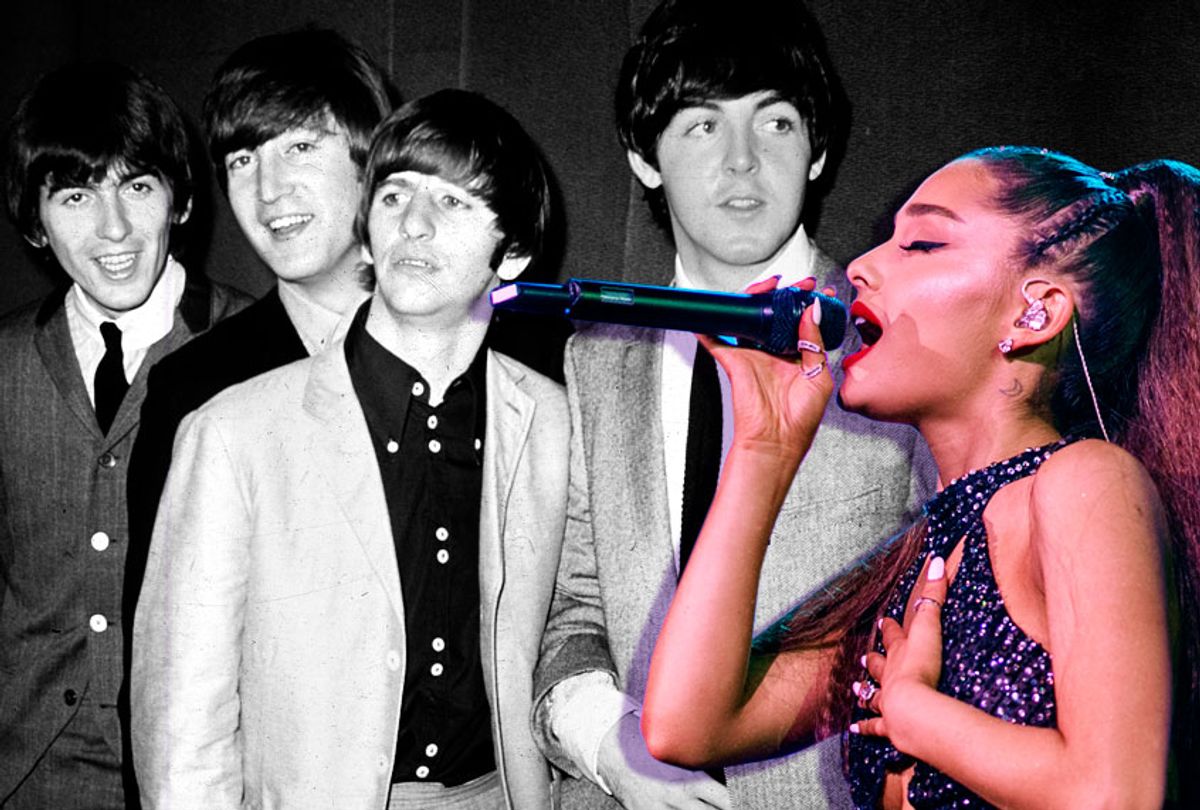 Ariana Grande’s recent and sustained run at the pop charts has been nothing short of a marvel. And like the great pop explosions of the past—Elvis Presley, the Beatles, and Michael Jackson, to name but a few—she is poised for immortality. And rightly so.

During the week of February 19th, Grande laid claim to her place in pop music history. First, she tied the Beatles’ April 1964 record for holding down the top three spots on the Billboard Hot 100. With “7 Rings,” “Break Up with Your Girlfriend, I’m Bored,” and “Thank U, Next” lording over the Hot 100, she matched the Beatles’ 55-year-old record.

As far as hit singles go, the Fab Four’s highwater mark was memorialized with the April 4, 1964, issue of Billboard, when their music occupied the top five chart positions—the only time in pop-music history that a single act has accomplished such a feat. With “Can’t Buy Me Love” holding down the top slot, “Twist and Shout” was second and “She Loves You,” “I Want to Hold Your Hand” and “Please Please Me” rounded out the top five.

Perhaps even more impressively, given our era of digital streaming, Grande capped off her fabulous February week by selling some 360,000 equivalent copies of "Thank U, Next," her fifth studio album. In so doing, she set the record for the most successful streaming week for a pop album. Her latest LP joins a string of chart-topping bestsellers that includes "Yours Truly" (2013), "My Everything" (2014), "Dangerous Woman" (2016), and "Sweetener" (2018). And like the Beatles, Grande seems to be picking up steam. Along with a raft of top ten singles over the past few years, she has been accelerating her output, with "Thank U, Next" following closely on the heels of "Sweetener," which was released last August.

In 1964, the Beatles emerged as a truly international phenomenon, devoting much of the year to consolidating their fame with their vaunted appearance on "The Ed Sullivan Show," a world tour, and their first feature film in "A Hard Day’s Night." During that same period, they recorded two studio albums and closed out the year with a string of sold-out holiday concerts in London.

As "Thank U, Next" holds sway atop the Billboard charts, Grande is hardly sitting idly by. In March, she will embark upon an 80-date world tour, a brilliant move in the wake of the twin successes of "Sweetener" and "Thank U, Next." Not surprisingly, advance ticket sales have been brisk for the upcoming "Sweetener World Tour," which will include a headlining stint at Coachella in April.

Like the Beatles, Grande has carefully honed her talents—most notably, her incredible multi-octave vocal range. In this vein, her collaborator Savan Kotecha has compared her singing prowess with the otherworldly guitar skills of Jimi Hendrix. But as Kotecha has also pointed out, Grande’s abilities don’t end with her vocal talents. As Kotecha recently observed, “When the producer or engineer is not understanding what she wants, she just goes, ‘do you mind if I sit and do it?’ She’ll go into Pro Tools and fix it. She’s a master of the craft. I’ve been around some of the greatest singers of all time. I’ve never seen anything like this.”

Grande’s evolving skills at record production bode well for her continuing growth as an artist. By 1965, the Beatles made similar strides in the mid-1960s, joining producer George Martin in the recording booth at EMI Studios and taking a heavy hand in the creation of their sound. “We gradually became the workmen who took over the factory,” Paul McCartney remarked in later years. “In the end, we had the run of the whole building. It would be us, the recording people on our session, and a doorman. There would be nobody else there. It was amazing, just wandering around, having a smoke in the echo chamber. I think we knew the place better than the chairman of the company because we lived there. I even got a house just ’round the corner, I loved it so much. I didn’t want ever to leave.”

If Grande hopes to continue matching the Beatles’ unparalleled career trajectory, she would be wise to maintain, if not increase the control that she already exerts in the studio. But perhaps even more importantly, she would be shrewd to begin seeking out ways to grow her demography. When the Beatles exploded their consumer base beyond the teenagers who launched Beatlemania, they managed to pull off their most impressive trick of all.

And it was no accident. Beginning with “Yesterday,” which was released as a single in the American marketplace in September 1965, the Beatles wormed their way into the ears of their listeners’ parents. With Martin’s deftly orchestrated string quartet, “Yesterday” changed the band’s consumer calculus in the blink of an eye. Later that year, with "Rubber Soul"’s “In My Life,” “Michelle,” and “Norwegian Wood (This Bird Has Flown),” the group cemented their claim with adult listeners.

But they didn’t stop there. With "Revolver" (1966), the Beatles expanded their demographic reach even further still. The double A-sided, chart-topping single “Eleanor Rigby” b/w “Yellow Submarine” makes for a splendid case in point. With the classically-driven balladry of “Eleanor Rigby,” the band made further strides into the adult marketplace, while the playful “Yellow Submarine” found them making inroads into the realm of pre-teenaged listeners. In short, by the end of 1966 the Beatles could lay claim to a demographic that ranged from toddlers to the elderly—a leap that remains virtually unmatched in the history of popular music.

There is little doubt that Grande, in her own right, has already matured as a songwriter across her five studio albums. Her debut single “The Way” was a trifle of flirtatiousness and puppy love in contrast with her trio of hits from "Thank U, Next," which find Grande exploring the hard realities of adult relationships, where romantic ideals are easily replaced by other, more worldly needs. In this manner, her music is not unlike the Beatles’ early years, where the mostly innocent rites of romantic love ruled the day. But the real test for Grande will materialize in the coming years. Will she shed her carefree, child-star origins for something greater, more contemplative as her career stretches forward? Will she eclipse the genre, like the Beatles, and cultivate a more expansive demography beyond her core fan base?

It is important to remember that the Beatles’ place in pop music’s pantheon was not always as settled as it may seem in the current day. Ironically, in the very same April 1964 issue of Billboard in which the Fab Four racked up the top five chart positions, the magazine published an editorial claiming that “just about everyone is tired of the Beatles. Disc jockeys are tired of playing the hit group; the writers are tired of writing about them. Everyone’s tired of the Beatles except the listening and buying public.” Thanks to their unparalleled evolution as songwriters during the mid-1960s, the listening and buying public’s desire for Beatles music has never really ebbed.