Our fathers escaped the Holocaust: Recovering a wartime friendship through letters

80 years ago, Nazis marched into Prague. Like many Jews, our fathers became refugees 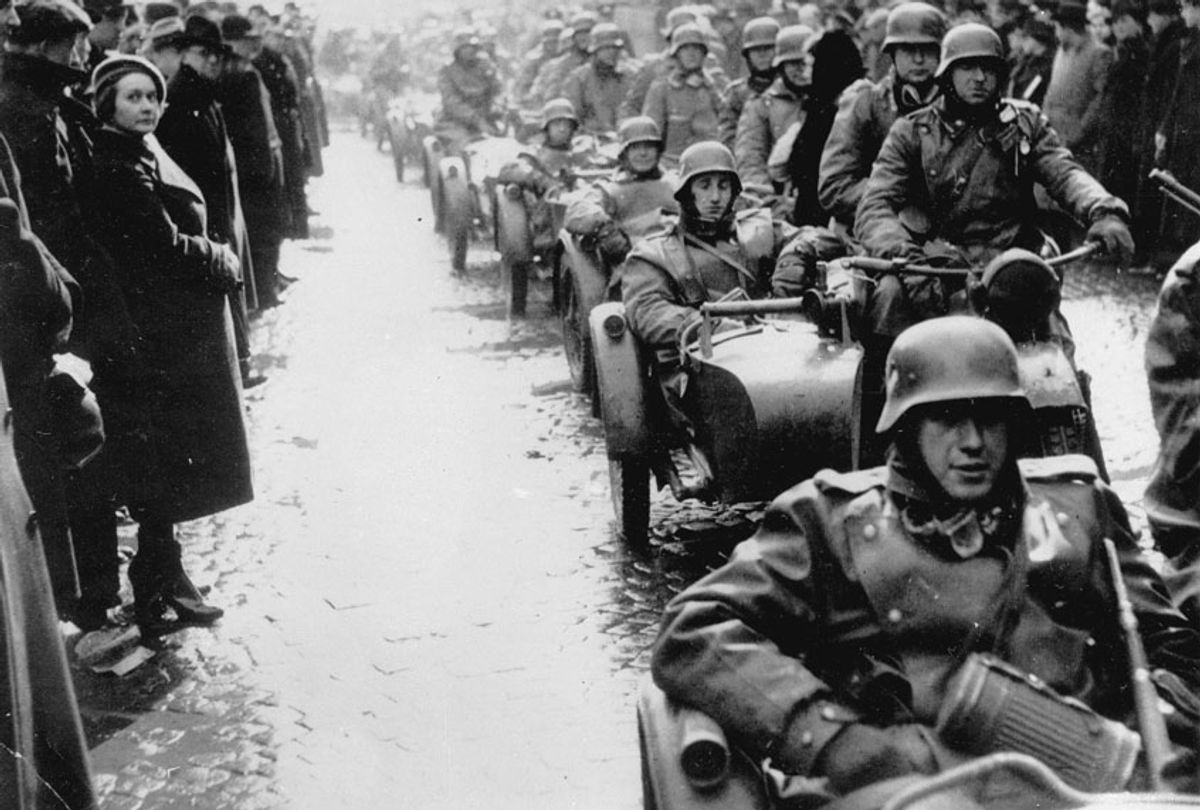 German Nazis riding in a convoy of motorcars invade Prague as people line the streets and watch silently in the rain and sleet on March 15, 1939 during the Czech German Occupation. (AP Photo)
--

Sorting through my father’s belongings after his death nearly 20 years ago, I found two Chinese lacquered boxes. They were filled with hundreds of letters from dozens of correspondents, along with carbon copies of the letters written by my dad, Oswald “Valdik” Holzer, all in his native Czech.

One of the earliest letters was sent from London to my father in Shanghai and included a scribbled signature, “From your Bala.” Exchanged at the start of World War II, six letters from Bala to Valdik had been saved and there were three from my father to Bala. The two men shared the status of displaced, stateless persons, identifying themselves in the letters as “emmies” (slang for émigrés). Both young men poured their hearts out from their unique, vulnerable positions, immersing themselves in new lives in foreign lands, separated by half a world, as Jews who escaped Prague at the time of the Nazi invasion in March 1939.

Bala’s identity remained a mystery until a decade ago. Thanks to the work of my translator Lukas Pribyl and the help of search engines, I found Nicholas Bala, a law professor in Ontario. I emailed him and he swiftly replied:

I am the son of Karel, who died January 1, 1996, at age 87.   He was born Ballenberger but changed his name to Bala during or after the war when he immigrated to Canada.   I am afraid I do not remember hearing the name, Dr. Oswald Holzer.   Nick Bala

Our correspondence renewed a friendship between our families; it had only taken 70 years to reconnect. Nick’s father was three years older than mine and both attended Charles University in Prague, graduating in the 1930s. My father studied medicine, while his father earned a law degree. They met regularly at the Manes Café, a gathering place for young intellectuals in the city. Bala married young, while my father did not marry until meeting my mother, the daughter of a missionary family, in Shanghai. As we unraveled the pasts of our fathers, Nick said, “My father’s loss from the Holocaust left him scarred to the end of his life.”

Reading the letters, I realized how deeply my father was scarred as well — a past he never discussed with us. The correspondence reveals stories of the will to survive, the nobility of human dignity and the guilt of escape when leaving family and friends behind; my father lost 44 relatives in the Holocaust, including his parents. Like Bala, he kept the depth of his suffering hidden from his children; it was their way of protecting us from a past they did not want us to relive with them. The grief that haunted Bala was also shared by my father — the loss of his first wife, Milena Langer, who was also a close friend of my father’s.

Milena was also a regular at the Manes Café. She was the daughter of a prominent lawyer who gave Bala a job shortly after graduation and together they had two children. In the early part of 1939, Bala knew he would be in immediate danger and begged Milena to leave for London with the children, though he barely spoke English and had no job or prospects. Milena’s father persuaded her that she would be safe in Prague in their comfortable house, living on his substantial income. Bala left for London, with hopes his family would soon follow.

Shortly before my father’s departure for China, he met his friends at Manes Café. By April 15, Manes had posted a sign refusing service to Jews; Milena converted to Catholicism, believing that might provide some protection. Over the next eight weeks, Milena helped my father complete the voluminous bureaucratic paperwork necessary to leave the country. Serving as a translator of the German language, appointed by the High Magistrate of the Czech Court (similar to a notary), she verified his Nazi-required proof-of-residence document.

Over the next two years, as the situation deteriorated and the dangers for Jews increased, Bala and Valdik urged her to leave in any way possible. Milena had opportunities to escape: one of Bala’s colleagues had offered to take her and the children to London with him. She had an opportunity to accompany a “kinder transport” (children’s train) to London, and Bala arranged for her British Visa. She postponed making arrangements for the necessary exit papers until she became desperate about the impossibility of dealing with the Gestapo.

The Nazis marched into Prague on March 15, 1939, just over two weeks after Bala had left Prague. He joined the Czechoslovak Refugee Committee, organized by his uncle-in-law, Frantisek Langer, and began assisting Czech refugees. When WWII broke out after the Nazi invasion of Poland, September 1, 1939, Bala volunteered with the Free Czechoslovak Army in England.

After the war ended in 1945, Bala returned to Prague. He reunited with his niece, Sona Kubrova, who told Bala that she remembered helping Milena pack for transport to the ghetto at Lodz in October 1941. Milena, her parents, and her children were called for transport. The Nazis facilitated the transports by implying that the camps were better conditions than their homes. When Bala’s mother, Herminka, and his brother, Zdenek, were called up, Herminka went to have her hair done.

Friends told Bala that Milena had been a source of inspiration to other Jews and very caring for her children at Lodz. Then, later, survivors told relatives of Bala that upon arriving in Auschwitz, she had the choice of going to the work camp alone, which would have made her more useful to the Nazis, or remaining with her children; no one ever saw her in the work camps.

Bala launched a search for his wife and children through the International Red Cross which, among other activities, was reuniting families separated by the war. He did not receive a legal declaration of their deaths until May 15, 1946. It simply read “This to decree that the 31st of Aug 1944 is to be considered the date which the said Milena Ballenberger, Alena Ballenberger, and Jan Ballenberger did not survive.” The actual date of death was likely earlier, but the Nazis had abandoned their meticulous record-keeping by that point in the war.

Bala later remarried and began a family in Canada. Nick told me he didn’t know of his father’s first wife and children—or that his father was Jewish—until he was an adult. However, Nick said his parents were very much a part of the Czech community in Canada and continued to support relatives and friends in the CSSR. They helped Czechs who managed to escape in 1968 during The Czech Spring, and their house was often filled with Czech immigrants and refugees. The children were told vaguely that the visitors with tattoo numbers on their arms had got them “in the camps during the War.” In the early 1960s, my own Florida family also provided shelter to another group of desperate refugees—a Cuban family fleeing Fidel Castro’s oppressive Communist regime. Although only 12 years old at the time, I remember my compassionate father’s attention to their every need. I now understand it was his attempt to offer them some sense of belonging in the midst of displacement, a vulnerability he fully understood.

My father and his friends faced many difficult, unimaginable choices. Until I read the letters, I knew so little about the horrors that consumed my father’s youth. I wished I tried harder to break down my father’s wall of silence while he was alive. Maybe I could have helped him find peace in a way the letters he left behind have helped me to do. When I was a teenager, my father used to say, “You can be happy or sad. You get to choose.” By witnessing my father’s choices, I learned that no matter what weight falls upon us, the heart of the human being is revealed by the value we place on humanity towards one another.

Joanie Holzer Schirm is the author of "My Dear Boy: A World War II Story of Escape, Exile, and Revelation" (Potomac Books/University of Nebraska Press).