There is a seemingly endless quest by employers, consumers and insurers for the holy grail: less expensive coverage 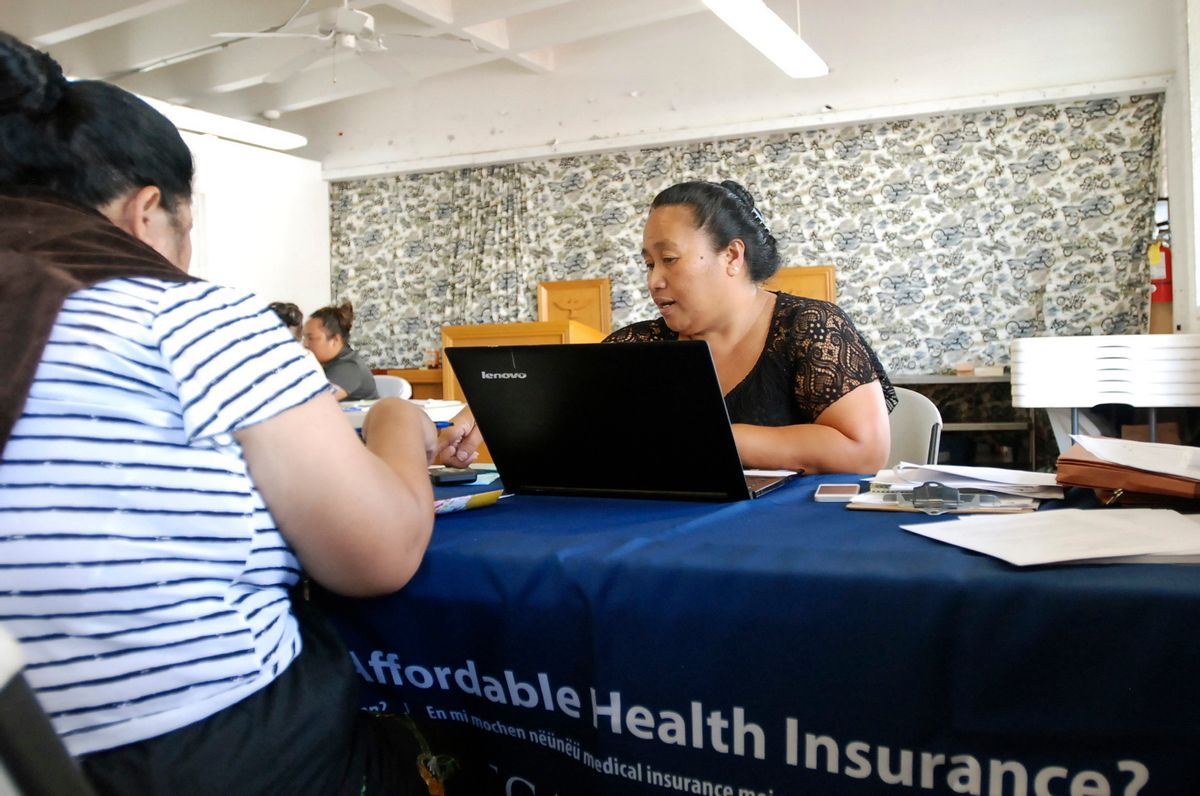 FILE - In this Jan. 30, 2017 file photo, Cinder Sonis, right, an advocate with Legal Aid Society of Hawaii, helps a customer enroll in an Affordable Care Act health insurance plan in Honolulu. Allowing insurers to market health care policies across state lines is one of President Donald Trump's main ideas for bringing down costs. While supporters of the idea cast it as a way to make insurance policies more competitive, critics say it's unlikely to result in more affordable plans and could undermine stronger consumer protections in states such as California and Hawaii. (AP Photo/Cathy Bussewitz, File) (AP)
--

One health plan from a well-known insurer promises lower premiums but warns that consumers may need to file their own claims and negotiate over charges from hospitals and doctors. Another does away with annual deductibles but requires policyholders to pay extra if they need certain surgeries and procedures.

Both are among the latest efforts in a seemingly endless quest by employers, consumers and insurers for the holy grail: less expensive coverage.

Premiums are 15 to 30 percent lower than conventional offerings, but the plans put a larger burden on consumers to be savvy shoppers. Even with those concerns, the offerings tap into a common underlying frustration.

“Traditional health plans have not been able to stem high cost increases, so people are tearing down the model and trying something different,” said Jeff Levin-Scherz, health management practice leader for benefit consultants Willis Towers Watson.

New types of insurance plans are sprouting up as employers face rising health care costs and individuals who buy their own coverage without an Affordable Care Act subsidy struggle to pay premiums. That has led some people to experiment with new ways to pay their medical expenses, such as short-term policies or alternatives like Christian sharing ministries, which are not insurance at all, but rather cooperatives where members pay one another’s bills.

Now some insurers — such as Blue Cross Blue Shield of North Carolina and a Minnesota startup called Bind Benefits, which is partnering with UnitedHealth Group — are coming up with their own novel offerings.

Insurers say the two new types of plans meet the ACA’s rules, although they interpret those rules in new ways. For example, the new policies avoid the federal law’s rule limiting consumers’ annual in-network limit on out-of-pocket costs: one by having no network and the other by calling additional charges premiums, which don’t count toward the out-of-pocket maximum.

But each plan could leave patients with huge costs in a system where it is extremely difficult for a patient to be a smart shopper — in part, because they have little negotiating power against big hospital systems and partly because illness is often urgent and unpredicted.

If the plans prompt doctors and hospitals to lower prices, “then that is worth taking a closer look,” said Sabrina Corlette, a research professor at Georgetown University’s Health Policy Institute. “But if it’s simply another flavor of shifting more risk to employees, I don’t think in the long term that’s going to bend the cost curve.”

This approach “puts you in control to see the doctor you want,” the insurer says on its website. The plan is available to individuals who buy their own insurance and small businesses with one to 50 employees, aiming particularly at those who cannot afford ACA plans, said Austin Vevurka, a spokesman for the insurer. The policies are not sold on the ACA’s insurance marketplace, but can be purchased off-exchange from brokers.

With that freedom, however, consumers also have the responsibility to shop around for providers who will accept that amount. Those who don’t shop, or can’t because it’s an emergency, may get “balance-billed” by providers unsatisfied with the flat amount the plan pays.

“There’s an incentive to comparison shop, to find a provider who accepts the benefit,” said Vevurka.

The cost of balance bills could range widely, but could be thousands of dollars in the case of hospital care. Consumer exposure to balance bills is not capped by the ACA for out-of-network care.

“There are a lot of people for whom a plan like this would present financial risk,” said Levin-Scherz.

In theory, though, paying 40 percent above Medicare rates could help drive down costs over time if enough providers accept those payments. That’s because hospitals currently get about double Medicare rates through their negotiations with insurers.

“It’s a bold move,” said Mark Hall, director of the Health Law and Policy Program at Wake Forest University in North Carolina. Still, he said, it’s “not an optimal way” because patients generally don’t want to negotiate with their doctor on prices.

“But it’s an innovative way to put matters into the hands of patients as consumers,” said Hall. “Let them deal directly with providers who insist on charging more than 140 percent of Medicare.”

Blue Cross spokesman Vevurka said My Choice has telephone advisers to help patients find providers and offer tips on how to negotiate a balance bill. He would not disclose enrollment numbers for My Choice, which launched Jan. 1, nor would he say how many providers have indicated they will accept the payments.

Still, the idea — based on what is sometimes called “reference pricing” or “Medicare plus” — is gaining attention.

North Carolina’s state treasurer, for example, hopes to put state workers into such a pricing plan by next year, offering to pay 177 percent of Medicare. The plan has ignited a firestorm from hospitals.

Montana recently got its hospitals to agree to such a plan for state workers, paying 234 percent of Medicare on average.

Partly because of concerns about balance billing, employers aren’t rushing to buy into Medicare-plus pricing just yet, said Jeff Long, a health care actuary at Lockton Companies, a benefit consultancy.

Wider adoption, however, could spell its end.

Hospitals might agree to participate in a few such programs, but “if there’s more take-up on this, I see hospitals possibly starting to fight back,” Long said.

What About The Bind?

Minnesota startup Bind Benefits eliminates annual deductibles in its “on-demand” plans sold to employers who are opting to self-insure their workers’ health costs. Rather than deductibles, patients pay flat-dollar copayments for a core set of medical services, from doctor visits to prescription drugs.

In some ways, it’s simpler: no need to spend through the deductible before coverage kicks in or wonder what 20 percent of the cost of a doctor visit or surgery would be.

But not everything is included.

Patients who discover during the year that they need any of about 30 common procedures outlined in the plan, including several types of back surgery, knee arthroscopy or coronary artery bypass, must “add in” coverage, spread out over time in deductions from their paychecks.

“People are used to that concept, to buy what they need,” said Bind’s CEO, Tony Miller. “When I need more, I buy more.”

According to a company spokeswoman, the add-in costs vary by market, procedure and provider. Less than 7 percent of members should need add-in services in any given year, Bind estimates.

To set those additional premiums, Bind analyzes how much doctors and facilities are paid, along with some quality measures from several sources, including UnitedHealth. The add-in premiums paid by patients then vary depending on whether they choose lower-cost providers or more expensive ones.

The Cumberland School District in Wisconsin switched from a traditional plan, which it purchased from an insurer for about $1.7 million last year, to Bind. Six months in, Superintendent Barry Rose said, it is working well.

Right off the bat, he said, the district saved about $200,000. More savings could come over the year if workers choose lower-cost alternatives for the “add-in” services.

“They can become better consumers because they can see exactly what they’re paying for care,” Rose said.

Levin-Scherz at Willis Towers said the idea behind Bind is intriguing but raises some issues for employers.

What happens, he asked, if a worker has an add-in surgery, owes several thousand dollars, then changes jobs before paying all the premiums for that add-in coverage? “Will the employee be sent a bill after leaving?” he said.