On St. Patrick's Day, remember how anti-immigrant history repeats itself 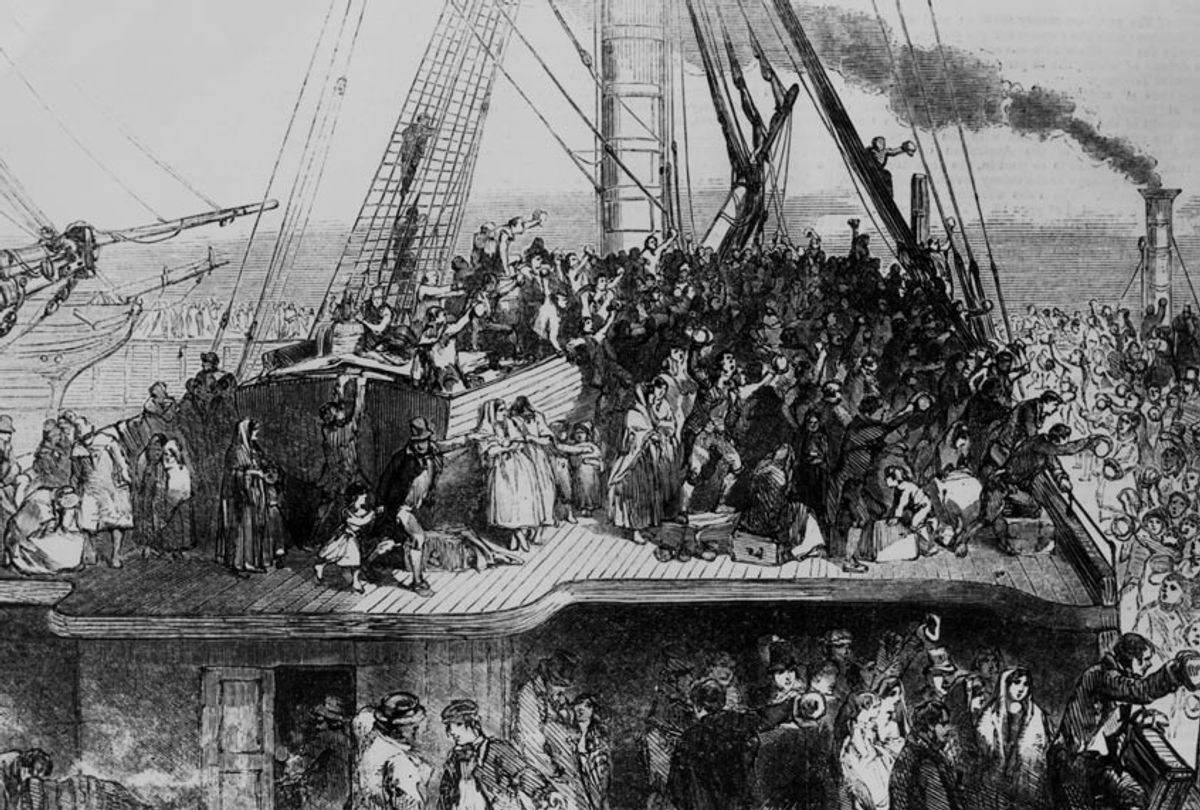 Irish emmigrants sailing to the US during the Great Famine, 1850. (Illustrated London News/Hulton Archive/Getty Images)
--

In 1856, two boys named Thomas Hogan and Patrick Hoynes arrived in New York from Ireland at a time when their countrymen, looking for work, were being told they need not apply. In the years following the Great Hunger, Ireland's peasantry hemorrhaged from their homeland, only to be met with disdain, bigotry, and an unhealthy dose of nativism upon their arrival to these shores. By the end of the 19th century, when the Irish-born population had peaked at nearly 1.9 million and an additional 4 million first-generation Americans had been born to them, the Irish in America made up 13 percent of the total population.

Today, more than 33 million Americans claim Irish heritage, myself among them. Given the paucity of family records, it's unclear whether Thomas Hogan and Patrick Hoynes ever met one another, but their granddaughter was my grandmother, Veronica Hogan, who in turn married into yet another immigrant family, the Guadagninos.

These days, I find myself wondering what would have happened if Thomas Hogan and Patrick Hoynes had been separated from their parents and put in cages with hundreds of other starving children, fleeing the aftermath of Ireland's decimating Great Hunger. What would have become of them if they were detained at the border, their desire to seek entry to the country labeled criminality because they were part of the population of "undesirables?"

Though the numbers of Irish entering the United States have declined dramatically, they still make up roughly 50,000 members of the undocumented immigrant community — a statistic often lost amidst the hand wringing over the southern border. In a nation where only 2 percent of the citizens can claim to be a part of the indigenous population, policies that villainize or criminalize immigrants are antithetical to our national identity.  We have not learned from the 19th century nativist hysteria over the Irish. We are not embracing the words of Emma Lazarus inscribed at the feet of the Statue of Liberty.

Of course, Irish immigrants are no longer on the receiving end of the discriminatory discourse around immigration. No one is declaring that Ireland is not "sending us their best," or issuing travel bans because of the risk of Irish terrorists coming in from their Catholic-majority country. But the nationalists who peddle these anti-immigration platitudes now are the ideological descendants of 19th century Americans who feared that hiring an Irish Catholic nanny would corrupt their Protestant children.

More troubling, arguably, is that the majority of modern nationalists are the biological descendants of immigrants themselves, including the Irish. Every time I hear political vitriol about the latest migrant caravan making its way to the United States, I wonder how those in power can forget that their ancestors, too, faced gripping poverty, violence, and hopelessness in their own countries just a few short generations ago. As a student of Irish history, I know well the desperate conditions that drove the families like the Hogans and the Hoynes to abandon their homeland and risk such a terrible journey, filled with hardship and danger, only to be greeted with suspicion, derision, and prejudice upon their arrival. In my classes at NYU's Ireland House, the topic of conversation turns continually back to the incredulity many of my fellow students share at hearing history repeat itself so unselfconsciously: how easy it seems to be for the current generation to forget that their ancestors were no different from the migrants now seeking amnesty on our southern border.

Given my scholarship and my ancestry, I had been thinking about the charged ideology around immigration for a long time before I wrote my debut novel, "The Parting Glass." Indeed, the bulk of my writing had focused on the history of Ireland and the Irish diaspora, with particular focus on the ways in which the Irish were colonized in their own homeland, and marginalized even further when they left it. Little wonder, then, that my protagonist, Maire O'Farren, narrates her 19th century tale of pseudonyms and code-switching acutely aware that her career prospects and potential for amelioration will vanish if her employers discover that she is Irish. While Maire struggles to shed all markers of her Irish identity, changing her accent and her name, her brother Seanin, who is unable to perform as adeptly as his sister, finds refuge from nativist discrimination by banding together with his fellow countrymen under the auspices of Tammany Hall. The siblings find plenty to quarrel over, including which of them has chosen the best path toward social advancement in 19th century New York.

Though the arguments about the status of immigrants used in the book are accurate to the late 1830s, I was disheartened during the editing process to hear them repeated as political soundbites, promoting the closing of borders that the speakers' ancestors once struggled to cross. While I did not set out to write an allegory for the quagmire of 2019's immigration debate, I am proud to have come down on the side of the Patrick Hogans and Thomas Hoynes of the current era.

I have to imagine a future in which our descendants will look back at the phrase "build the wall" with the same bemused contempt that we currently view the words "no Irish need apply."

Gina Marie Guadagnino holds a BA in English from New York University, and an MFA in Creative Writing from the New School. She is currently a graduate student of Irish Studies at NYU. Her work has appeared in the Morris-Jumel Mansion Anthology of Fantasy and Paranormal Fiction, "Mixed Up: Cocktail Recipes (and Flash Fiction) for the Discerning Drinker (and Reader)." She lives in New York City with her family. Gina Marie Guadagnino is the author of "The Parting Glass" (Atria), on sale now.