What’s your damage? Why a "Heathers" TV adaptation hasn’t worked — yet 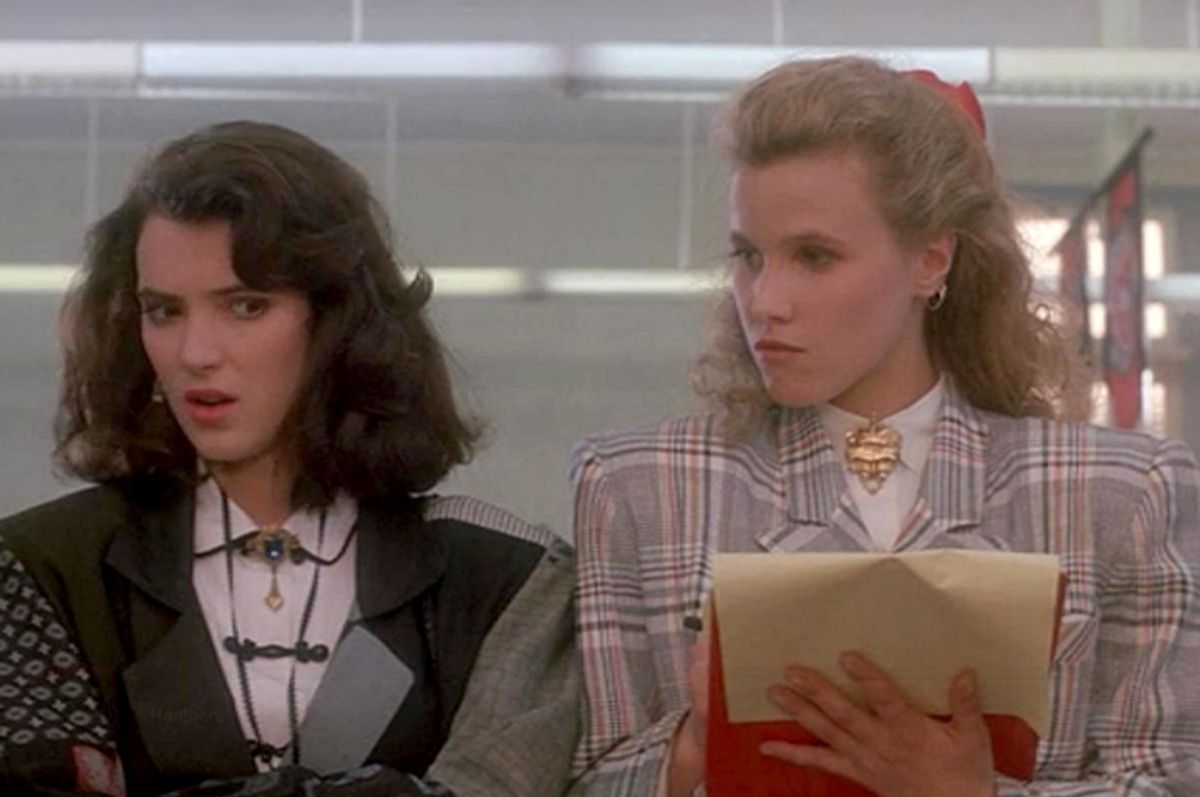 As “Heathers” approaches the 30th anniversary of its U.S. premiere, television has made yet another failed attempt to pay homage to Michael Lehmann’s 1989 pitch-black high school comedy. The cult classic starring Winona Ryder and Christian Slater inspired a whole genre of dark school comedies that tried to emulate the film’s quippy dialogue, heightened style, and satirical look at the grim realities of teenage life.

Add to that list of imitators The CW’s Archie Comics melodrama “Riverdale,” which presented its second musical episode on Wednesday. This time around, it featured the Broadway musical “Heathers,” which is a more heartfelt and navel-gazing adaptation of the movie. Even though the gothic “Riverdale” would seem like a good fit for this homicidal high school tale, the show managed to fail in honoring both the film and stage versions of “Heathers.”

In fact, it didn’t even try. There’s no real attempt at presenting the “Heathers” plot at all, and all of the stage show’s songs are performed out of context. This is less of an homage and more of a Frankenstein creation, giving incoherent life to stitched-together elements. This is not an indictment on the quality of “Riverdale” overall; it knows the pulpy shtick that works for its audience. It just isn’t interested in giving the audience any understanding of “Heathers” beyond monochromatic outfits and croquet mallets.

“Riverdale” had far more success with last year’s musical homage to “Carrie,”which also used songs from the lesser-known musical adaptation of the same name. More thought was given to interweaving the musical numbers with the show’s ongoing storyline, and the casting made more sense. (How did the “Heathers” episode miss out on casting its own character named Veronica as Winona Ryder’s Veronica in the movie?!)

In contrast, only one other show has made an honest attempt of adapting and updating “Heathers” for television, and that’s Paramount TV’s much-maligned anthology series that had a rocky history even before it aired. Although it had been ordered to series at TV Land, a place for nostalgia programming, it was eventually moved to Paramount Network, from the rebranded Spike TV. This move possibly contributed to its doom, but more on that later.

As with the film, the TV show’s Veronica Sawyer (Grace Victoria Cox) joins the popular high school clique known as the Heathers, a trio of thin and pretty white girls who share the same first name. However, the show makes a significant change: the Heathers people who are usually marginalized. The lead Heather is fat-positive, the henchman is genderqueer, and the meekest member is a black lesbian. Like the movie, the satirical series also addresses teen suicide, peer pressure, and violence, but modernized for our times. Popularity comes through weaponized social media, and guns are everyday. One episode even opens with a twist on school shootings.

Then came the real-world shootings. First came the high school shooting in Parkland, Fla., on February 14, 2018, after which Paramount postponed the show’s scheduled March premiere date “in light of recent tragic events.” A new May premiere was then announced but on May 18, the Santa Fe High School shooting occurred in Texas. On June 1, Paramount Network dropped the series altogether with an intent to shop it elsewhere because “the combination of a high school show with these very dark moments didn’t feel right.”

Clearly, Paramount didn’t want to be seen as capitalizing on or exacerbating the tragic circumstances. But it also could have been cutting its losses since early reviews weren’t very kind. Without the appeal of a fresh-faced Winona Ryder, the squinty charisma of Christian Slater, the scathing contemporary insight, and wildly inventive, note-perfect dialogue — the Paramount series just seemed mean, gimmicky, and without the true understanding of how to balance those elements. Tepid chemistry between the leads, and characters who were uniformly unsympathetic across the board left critics cold. All of that, added to the true life tragedies, and it just seemed unwise — some even called it irresponsible — to back such a smirky show.

However much critics and purists may have decried the reboot, executive producer Leslye Headland still has mixed feelings about how viewers didn’t get to have the final say about the show’s merits. Despite the controversial execution of the show, it was still a painstakingly crafted labor of love that honored the original film in every single second possible. Not only does the pilot feature original cast member Shannen Doherty, but the episode is practically choking with references and Easter eggs from the classic.

“They definitely had their reasons, monetarily, for pulling the show … but it did feel like it was canceled before it even came out, before an audience even got to really see it,” Headland said in an interview with IndieWire. “I would joke to Jason Micallef, who created the show that [pulling the show] is the most ‘Heathers’ thing that could’ve possibly happened to ‘Heathers.’”

But was “Heathers” just a victim of untimely circumstance compounded by bad reviews? Although it’s not widely acknowledged, Paramount Network did eventually air the series in October 2018. But it burned off all episodes in two weeks and combined the final two episodes into one. At that point though, “Heathers” was drama non grata; critics who may have heard of the airing didn’t bother watching or reviewing the series, much less tell their readers how to watch the show. Instead, the series has found more traditional release overseas and can still be streamed on ParamountNetwork.com. The fate of the show, which was meant to be an anthology, is still in limbo. In the Season 1 finale, a teaser reveals what would be next season’s setting and time period, should “Heathers” ever get resurrected.

Having “Heathers” air on a newly rebranded network that most people didn’t understand how to find on their cable lineup didn’t help either. Without big names like Kevin Costner, who stars in the network’s highly rated “Yellowstone,” the show just didn’t have the same curiosity factor to drive viewers to seek it out, even at the height of nostalgia culture. If “Heathers” were on a streaming platform like Netflix, the discovery algorithm could have helped find an audience.

Besides which, Netflix has shown a history of sticking by shows that have been critically panned or have been found to be problematic. The high school drama “13 Reasons Why” deals with many of the same issues as “Heathers” and was even taken to task for its depiction of suicide, rape, and a school shooting scare. Despite that, Netflix picked it up for a third season. Headland can’t help but compare the treatment between Paramount and Netflix, where she’s enjoyed success with the acclaimed comedy “Russian Doll.”

”I love working for Netflix. I think they’re a fucking dream,” she said. “Look at the way they reacted with ‘Insatiable,’ where everyone got upset, but they didn’t pull the show. They didn’t say, ‘Well now the show is not allowed to exist.’ That’s more of a CEO of Viacom problem, and I’m definitely not going to start a fight with whoever he is.”

The original “Heathers” also had the comforting distance of fantasy. While the movie was lauded for respecting some of the real problems that teens face, the most heinous ones — students killing each other or blowing up the school — were seen as extreme. Now, those acts have become everyday to the point that including them in a series isn’t edgy, it’s terrifying and depressing. Viewers and critics have become more sensitive to these shadings and can’t merely write off problematic portrayals as escapist fare anymore. Messaging is, well, paramount. And then creating an ongoing narrative that revisits issues week to week, upping the ante but not falling into melodrama or worse – desensitization – is another challenge.  It’s a burden that the original “Heathers” didn’t have to contend with.

Of course, the originality and freshness of the movie remains unparalleled as well. Technology and worrisome sentiments about sexuality aside, the movie still holds up incredibly well. Nothing matches its tonal lunacy and glee that everyone from Ryan Murphy (“Glee,” “Scream Queens”) to Tina Fey (“Mean Girls”) has emulated. It’s the lightning in a bottle that elevated high school comedies from hormonal troubles to burgeoning adults.

Read more IndieWire: Netflix and ’13 Reasons Why’ Can Learn From Paramount Network Scrapping the ‘Heathers’ Reboot

That’s precisely why “Heathers” keeps getting revisited though. The stage musical is a different enough medium that it can get away with making the story more earnest by giving the characters interiority through song. But anyone trying to stay true to the original “Heathers” magic sans swelling choruses won’t find that an easy task, as history has shown.

Although it’s unlikely, perhaps the most “Heathers” thing that could happen to the show would be for it to find an audience if it goes to a popular streaming service. And then Season 2 could be a viable option. But most likely, the storytelling approach, the world, or both will have to change to make a reboot work. Perhaps in time for the film’s 40th anniversary, Veronica Sawyer and the Heathers will be ready to revisit whatever new “horror the American teenager can think upon itself.”