Trump vs. "SNL": A political comedy Americans are actually watching

A new poll shows Americans have strong opinions about mixing politics with comedy, even on shows they don't watch 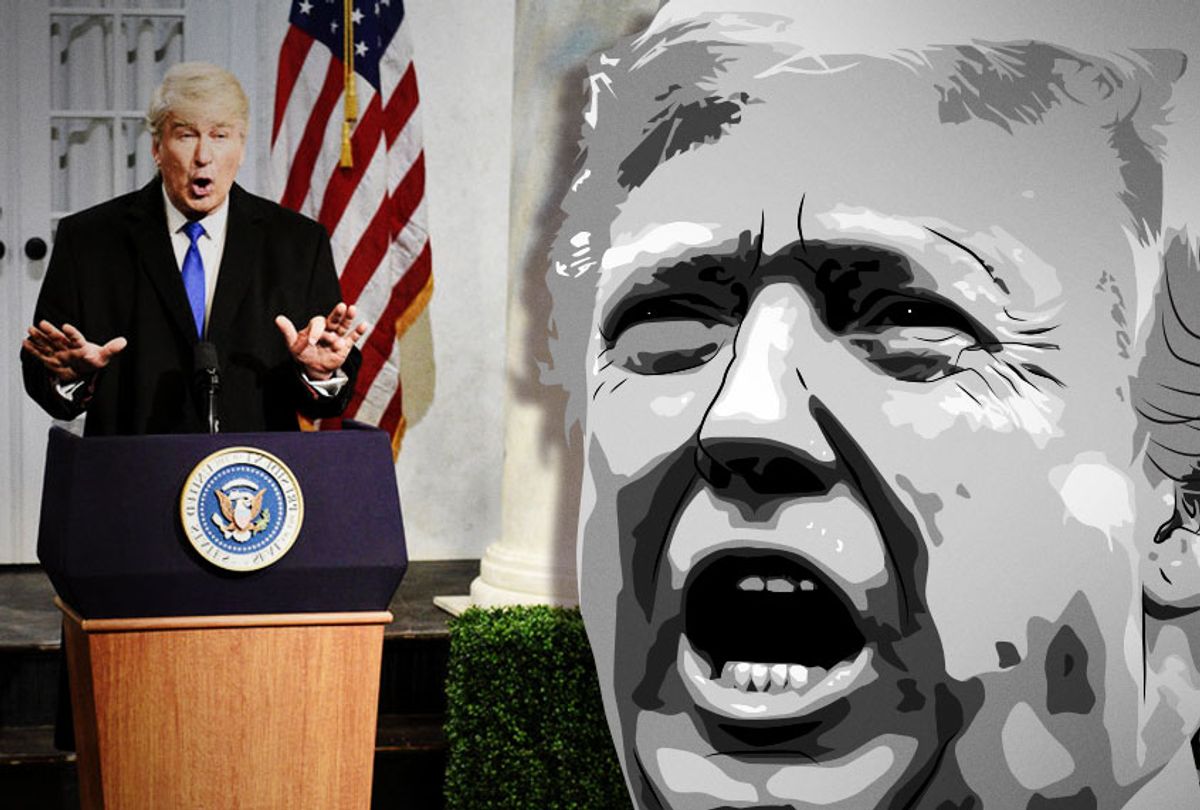 The last couple of weeks have been big for those who like to worry that late night comedy is too political. First, we had President Trump’s latest meltdown over the way that “Saturday Night Live” depicts him. But this particular tirade was special because Trump not only suggested that there should be a federal investigation into "SNL"’s mocking of him, he got himself all worked up over a rerun.

And then a new Hollywood Reporter/Morning Consult poll came out that seemed to suggest that a significant number of Americans think that "SNL" has become too political.

On first blush, the new poll might seem to show a convergence between Trump’s thin skin over "SNL" jokes and general public perception. According to the poll’s respondents, 39 percent agreed that the show "has gotten too political," while 30 percent disagreed. Glancing at those results, one might conclude that many Americans really have had enough of the rise in political comedy in the Trump era.

But that conclusion would be wrong — or at least deceptive, because it suggests that respondents critical of the political jokes on "SNL" actually watch the show. Instead, 61 percent of the respondents to the poll never watch "SNL" at all — not ever, not in any format. Yet the Hollywood Reporter headline (THR worked with Morning Consult on the poll) on the story announcing the poll's findings reads, “Many Americans Say 'Saturday Night Live' Is Now ‘Too Political,’ Poll Finds.”

While technically true, that headline is misleading. In fact, there are a number of interesting takeaways from the poll — none of which are the fact that “many” Americans don’t like the political comedy on shows like "SNL."

First, the poll underscores the growing presence of political comedy as a feature of public debate and opinion. Respondents were more than happy to weigh in on whether or not shows like "SNL" have too much political content — even when they didn’t watch the shows. Participants were asked a series of questions about the presence of politics on a range of shows, and in example after example, respondents who had no direct knowledge of the shows themselves still had strong ideas about them.

Take this question: “Do you agree or disagree with the following statements? I like it when late-night hosts give their personal opinion on political issues.” Forty percent said they agreed or strongly agreed. Thirty-six percent disagreed. But only 26 percent either didn’t know or had no opinion. Yet, as I mentioned, 61 percent of the respondents don’t watch the shows at all, meaning that some respondents were forming their opinions from sources other than the comedy itself.

This leads to the second takeaway: Public perceptions about the presence of politics in late-night comedy aren’t coming directly from the shows themselves, but rather from public debate about them. While the poll offers no data on how respondents formed their views of shows they didn’t watch, we know that Trump himself regularly tweets criticism of shows like "SNL," and those tweets are then analyzed in the mainstream news, a dynamic that is likely playing a significant role in shaping public views.

The next critical takeaway deals with the partisan breakdown of responses. As Tyler Sinclair, Morning Consult’s vice president, points out in the article for THR, "37 percent of Americans say the program has the right amount of politics in its sketches, while 31 percent say it has too much and 4 percent say too little. However, the results vary across partisan lines. Over half of Republicans (55 percent) say the program incorporates too much politics; only 14 percent of Democrats say the same."

This breakdown is altogether predictable, and yet it leads to the last observation: Media outlets love to hype worries over the role of politics in late-night comedy, even when there isn’t any evidence to back them up.

While coverage of this poll in The Hill highlighted the split results of respondents, the story's headline was still misleading. It read “Viewers Split on the Politics of ‘Saturday Night Live,’” when the poll wasn’t sampling viewers, but rather the public at large. The headline ran by Consequence of Sound read, “Americans believe SNL has gotten too political, according to new poll.” This headline fails to recognize the split results, and also seems to suggest that Americans at one point didn’t think the show was too political, even though the poll offered no such historical data.

What the poll really teaches us is that there is a tendency to like worrying about politics in comedy, even when there is no basis for those worries at all. The irony of course is that comedy tends to focus more on politics when it is easier to mine the material — the more absurd the political climate, the more jokes there will be. These jokes may be pure moments of mockery or they may have a satirical edge that allows the audience to critically reflect on the situation. Calling out "SNL" in particular as a culprit in increased political comedy content is even more ridiculous, since the show has a long history of making jokes about key political figures regardless of party, and impersonations of presidents have long been a central feature of the show.

So perhaps rather than worry about whether "SNL" is too political, we should worry about why our current political landscape keeps offering the show's writers so much material. It’s not the jokes about politics that are the problem; it’s that politics today too often is already a joke.