The absurd outrage over Jussie Smollett

How can Rahm Emanuel be so angry over Smollett's dismissed charges when grave injustice happens daily on his watch? 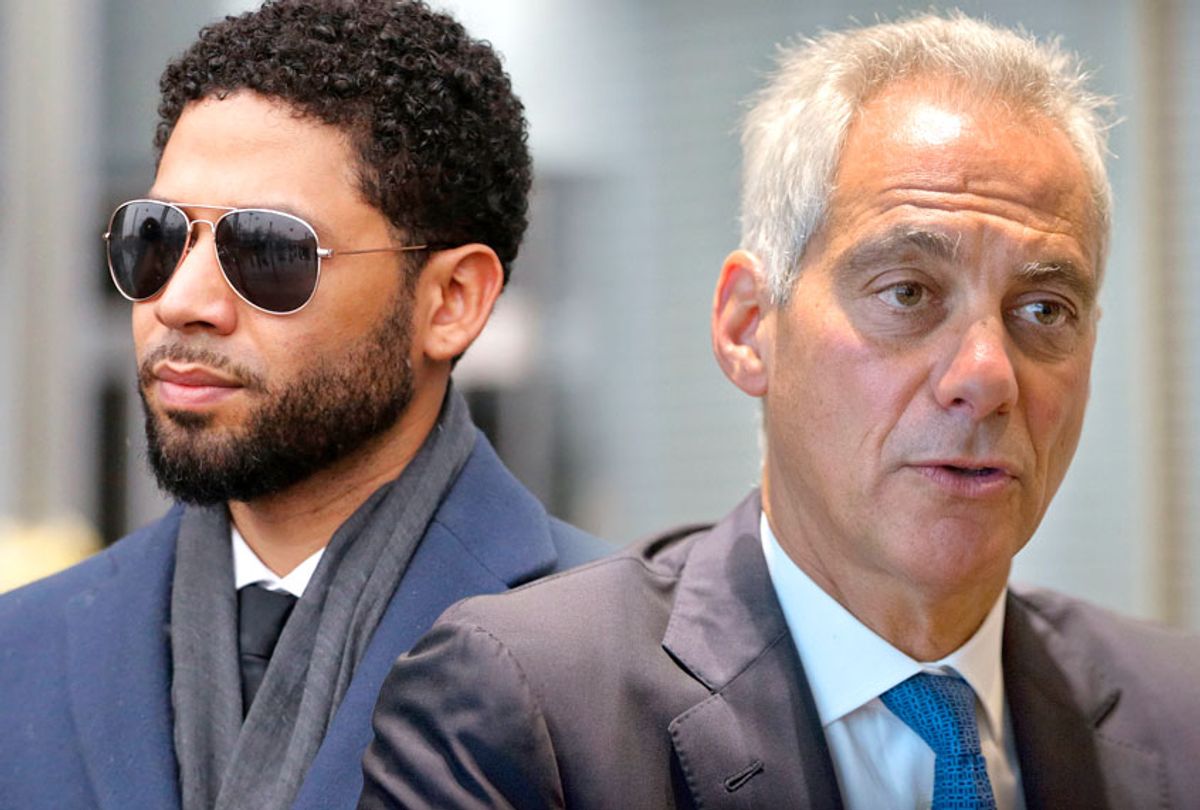 There are few images more vomitous than Chicago Mayor Rahm Emanuel giving a high-minded speech about justice, while surrounded by the top brass of the Chicago Police Department. Emanuel is the same Machiavellian mayor whose administration concealed a video tape of Jason Van Dyke, then a Chicago police officer, murdering Laquan McDonald, a 17-year-old African American, in cold blood. A jury of his peers convicted Van Dyke of second degree murder only to have a judge hand down the absurd sentence of six years and nine months. The judge said that the courts must take into account Van Dyke’s “years of public service” when punishing him for the crime. After all, who can begrudge a distinguished officer an occasional homicide? It turns out, however, that Van Dyke was not so distinguished. Twenty citizen complaints were filed against him, including for the use of racial slurs and excessive force, but none resulted in any disciplinary action.

The Chicago Police Department paid $45 million in settlement fees for violations of civil rights in 2018, ringing up a staggering $662 million total since 2004. The most egregious and vicious exhibition of cruelty and despondency from the CPD involved former commander Jon Burge, who routinely ordered his officers to torture black men in the elicitation of false confessions.

In 2015, the Guardian reported that the CPD, in an eerie combination of the Middle Ages and Dick Cheney’s dreams, administers a “black site,” where suspects have received “off the books” interrogation. With a policy that struck a match to the U.S. Constitution, along with any notion of basic decency, police officers shackled suspects for nearly 24 hours, subjected them to physical abuse and neglect, and denied attorneys access to the facility. One man, whom journalists and legal advocates believe died in custody, entered the black site to never again see the outside world.

Racial profiling, police brutality, and an omerta to protect abusive and violent officers is as characteristic of Chicago as cold winters. Under the mayoral tenure of Emanuel, the draconian assaults on black residents of the city worsened, rather than mitigated, and for that reason, among many others, it challenges the heart and the stomach to watch Emanuel do his best impersonation of Thomas Aquinas, as he presents a treatise on justice for the cameras, all because disorderly conduct charges against the television actor Jussie Smollett, accused of staging a hate crime to advance his career, were dismissed. Emanuel thunderously denounced the city prosecutor, calling the decision to release Smollett a “whitewash of justice.”

For the sake of argument, even if one concedes that Smollett was as guilty as Van Dyke, a comparison of the crimes in question, and the reaction they each provoked, offers a colorful illustration of whose lives have value in the United States.

Filing a false police report, claiming victimhood when none exists, and exploiting the racial divisions of American culture would amount to an immoral and insidious waste of taxpayer money and police resources. Even still, it causes no one’s death, dismemberment, or, given that the police while investigating the hate crime arrested no suspects, imprisonment. Young, mostly black men are dead, suffer from debilitating injuries, or look over their shoulders at a life languishing in a prison cell for crimes that they did not commit because of the racism and criminality of the Chicago Police Department. Mayor Rahm Emanuel offers barely a word about those injustices. The unforgivable sentence for Van Dyke elicited only a mealy mouthed suggestion for the city to “repair its broken relationships” from the mayor — the same mayor who consistently shut down mental health clinics, and in one of his first governmental moves, closed 49 schools in black neighborhoods.

Emanuel, not exactly Donald Trump, but a Democrat with experience in the Clinton and Obama administrations, transcends his own persona to become the personification of white indifference to black oppression in America.

Emanuel has plenty of voices of support on the right. John Kass, a Chicago Tribune columnist and Trump supporter who dedicates himself to verifying Hillary Clinton’s “basket of deplorables” characterization of Trump’s base, wrote that Smollett’s release displays a “crooked system” of criminal justice. Kass’ previous journalistic triumph was referring to black youth as “feral” in a column that was typical of his Chicago tough guy, Jim Belushi meets Bull Connor routine. With the quality of erudition one would expect from a right wing radio host, Steven Crowder said that Smollett is “still a piece of shit,” and Donald Trump Jr., a living argument against America’s notion of meritocracy, accused CNN’s Brian Stelter of acting as “propaganda czar” for claiming that it is unlikely “we will ever know what happened” the night that Smollett alleges he was attacked.

Many deliberately obtuse white Americans object to the slogan and organizing title “Black Lives Matter,” because they feel it is exclusionary. If you are outraged over Smollett not facing trial for unprovable and nonviolent crimes, but demonstrated malevolent silence after Jason Van Dyke murdered Laquan McDonald on video — or, to move beyond Chicago’s borders, when Sandra Bland was found dead in her Texas jail cell while in custody for no crime; or when George Zimmerman was acquitted after profiling, stalking, and killing Trayvon Martin, an unarmed black youth walking to his father’s house; or when a New York police officer strangled Eric Garner to death, ignoring his repeated plea, “I can’t breathe,” because he was “illegally selling cigarettes,” you need only look in the mirror to find validation of the need for the protest cry, “Black lives matter.”

A favorite Republican bromide is that cities facing conditions of escalating poverty, urban decay, and racial inequality are “all run by Democrats.” While their identification of the political party of most major municipal governments is largely accurate, their assumption that the governance of America’s cities is leftist or progressive is superficial, shallow, and simply wrong.

If they broke with their own commitment to ignorance, and actually attempted to learn about what they pontificate, they would discover that Chicago, to use one salient example, has done little to correct its long history of redlining, hiring discrimination against blacks, police corruption and brutality, and educational apartheid. The “city of big shoulders” enjoys a liberal reputation because it is the home of Barack Obama, and it is one of the country’s most diverse, but it is also one of its most segregated. Throughout the black South Side, the terrain is full of food desserts, lack of commercial development, high poverty and crime, and a deficit of public investment. The white North Side is brimming with prosperity, presenting a small scale version of the stratification and inequality that now defines much of American life.

Paul Street, a historian who spent five years as research director for the Chicago Urban League in Chicago, opens his excellent book, "Racial Oppression in the Global Metropolis: A Living Black Chicago History," by explaining that his study of Chicago on the behalf of a civil rights organization, “provided invaluable lessons on the powerfully persistent grip of white supremacist race apartheid and anti-black discrimination in American life in the post-civil rights era.” Street correctly describes black neighborhoods full of dilapidated housing and disgraceful schools as “quasi-Third World.”

Chicago is preparing for a historic change of guard in its imminent mayoral election. Two black women — Tori Preckwrinkle, the current Cook County Board President, and Lori Lightfoot, a veteran attorney and activist, and former leader of the Chicago Police Accountability Task Force, will face off on Tuesday in a runoff vote to determine the city’s next mayor. They both have advocated for positions and proposed policies vastly superior to those of the Emanuel administration, and there is genuine hope that the next mayor — whether it is Lightfoot or Preckwrinkle — will begin to excavate the roots of Chicago’s economic and racial troubles, rather than repeat the technique of most moderate Democrats by merely manicuring the foliage.

The next mayor will have to contend, however, with a destructive culture of white callousness throughout Chicago, and America. Indignation over Smollett’s charges being dismissed, but refusal to address black suffering, even when it happens under sponsorship of the state, is the latest iteration of a refrain that dates back to the Civil War.

Jesse Jackson, when speaking at the Chicago headquarters of his civil rights organization, Rainbow/PUSH, once remarked that “it takes discipline to be as ignorant as Rahm Emanuel.” The same condemnation applies to the white majority.