Wearing someone else's scrubs: The comfortable cotton of the road not taken

In a family full of doctors, I always thought I'd be one too. But gradually I realized I'd have to go my own way 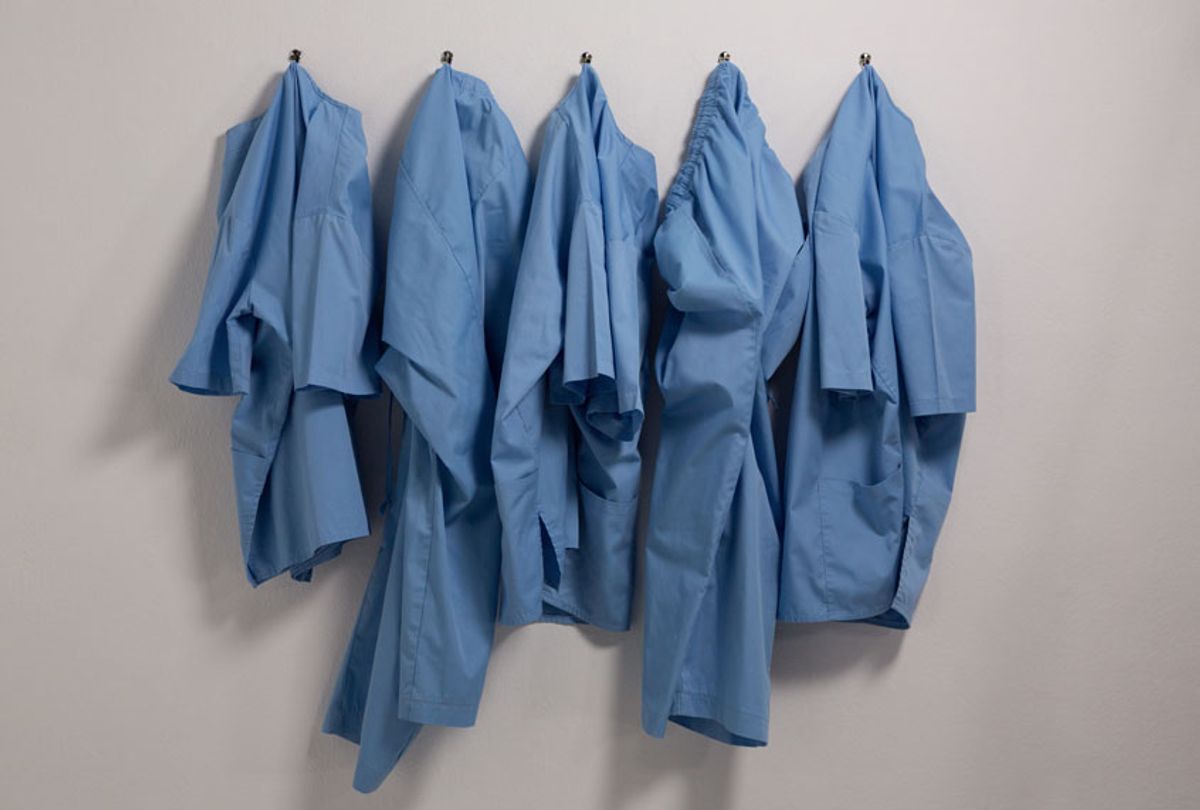 Several years ago, when I went on vacation with my parents, brother and sister-in-law — doctors, all of them — a pair of medical scrubs got mixed up in my laundry and came home in my suitcase. Since then, I’ve slept in the baggy blue garments at least a couple of nights a week, and I’m here to tell you, they’re more comfortable than any pair of pajamas I’ve ever owned. I should give them back, I guess. But the cotton blend is so smooth. Plus, the drawstring waist makes for easy on-and-off, handy when it’s time to change into something else.

Changing into something else isn’t always easy.

I thought I’d be a doctor. They say “if you can see it, you can be it,” so I assumed I’d be what I’d grown up seeing. In our family, people wore stethoscopes around their necks like scarves. When I was little, my grandfather watched me weaving friendship bracelets out of colorful string and said, “surgeon’s hands.” At 16, I watched through an observation window as my dad made surgical incisions on a patient’s head. I think the idea was to determine whether I could handle the gore. I could handle it. Blood is blood.

Following someone else’s path is easier — at least at first — than figuring out the other paths that might exist. No wonder I declared myself pre-med when I arrived at college. But after contrasting the misery of Chemistry 101 with the joy of Introduction to Poetry, I knew. I had probably always known. I knew it when I wrote knockoff fairy tales in kindergarten and asked my dad to “publish” them on the hospital Xerox machine. I knew it when I preferred diagramming sentences in middle school to dissecting frogs. This kid wasn’t meant for cutting up bodies; she was meant for stitching sentences together. Away from my family for the first time, I could finally see who I was — and wasn’t.

I became not a doctor, but a writer. And I discovered the excitement of forging human connections through words and the comfort of turning chaos into order on the page. Learning from more advanced writers and mentoring younger ones, I made a career I love.

Sometimes, especially after deleting a whole chapter and starting over for the tenth time, I think about the physician’s life I didn’t live and I feel wistful. But mostly I feel euphoric, in a near-miss way. Like I dodged a bullet. Or a scalpel.

I don’t set out to deceive anyone when I get out of the shower at the end of the day and put on my scrubs. But neither do I correct the delivery person when he hands over the pizza I’ve ordered instead of cooking dinner. He looks at my blue outfit and says, “Worked a long day, huh?” Yes, pizza guy, I did. I performed complicated surgery on a story. I almost gave up, but in the end I think I saved it. I’m proud.

Maybe you have some piece of clothing from another time in your life, a stage that was or wasn’t. If you’ve thought of throwing it away in a Kondo-inspired fit of organization, might I suggest you wait? Hold onto it, and be grateful for what it represents. I keep these scrubs — this uniform of my alternate universe — because they remind me of the almost-version of myself, the person who might have been had my younger self made different choices. I’m so glad she never existed.

Mary Laura Philpott is the author of "I Miss You When I Blink: Essays." Her writing has been featured in print or online by The New York Times, The Washington Post, The Los Angeles Times, McSweeney’s, The Paris Review, and other publications. She’s the founding editor of Musing, the online magazine of Parnassus Books, as well as an Emmy-winning cohost of the show "A Word on Words" on Nashville Public Television. She also wrote and illustrated the humor book "Penguins with People Problems," a quirky look at the embarrassments of being human.