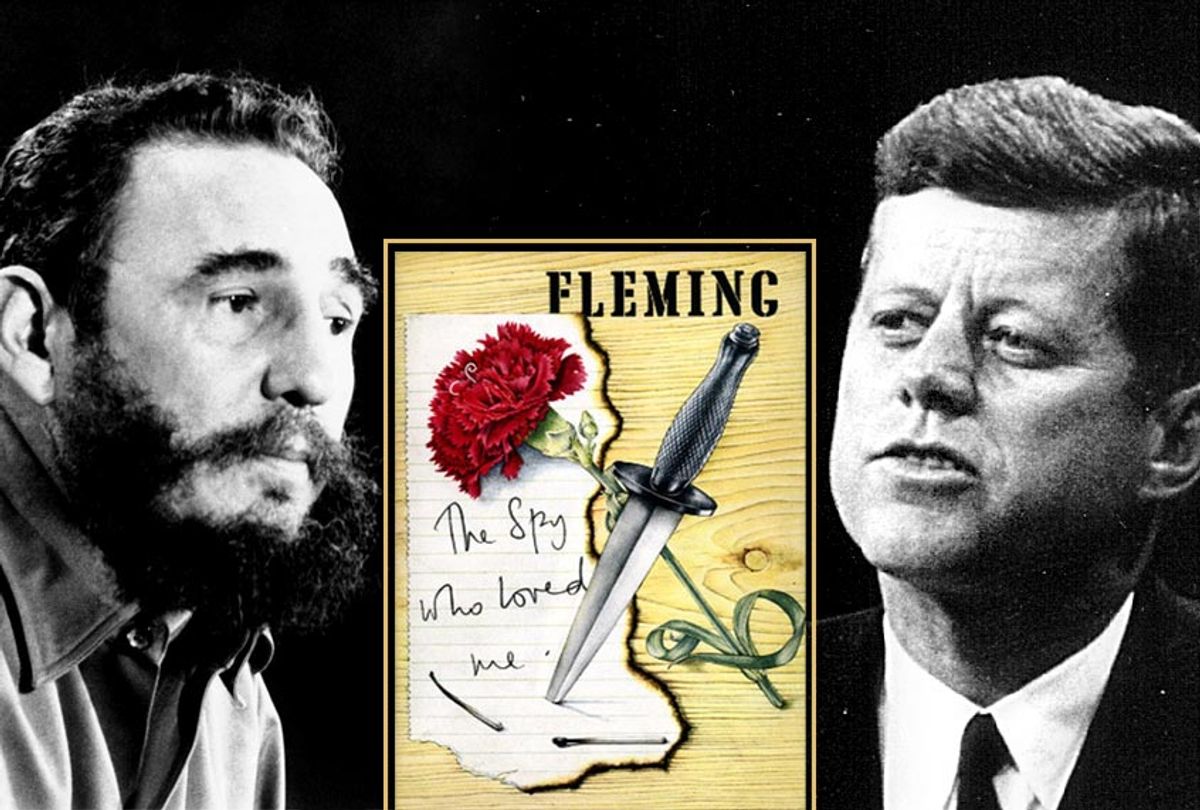 Excerpted with permission from "Mafia Spies: The Inside Story of the CIA, Gangsters, JFK, and Castro" by Thomas Maier. Copyright 2019 by Skyhorse Publishing, Inc.

High-tech spy gadgets, hidden poisons and exploding cigars. In "Mafia Spies," author Thomas Maier explains how much the fictional James Bond character created by novelist Ian Fleming influenced the real-life actions of President Kennedy and America’s spies. During the early 1960s, these whiz-bang killing devices were all part of America’s not-so-secret war against Cuba’s Fidel Castro, including a clandestine CIA plot with two top gangsters, Sam Giancana and Johnny Roselli, to assassinate the bearded Communist leader. Were America’s top spies imitating what agent 007 did on the big Hollywood screen?

During America’s 1960 presidential campaign, Cuba’s leader Fidel Castro and his Russian-backed Communist regime loomed as one of the nation’s top issues. Rumors of a pending U.S. invasion were rampant. And talk about spying floated in the air, thanks to the popular novels about the adventures of the fictional British secret agent, James Bond.

But in real-life, only a few knew of the CIA’s top-secret plan for assassination of Castro by two mobsters, Sam Giancana and Johnny Roselli—apparently not even the candidates themselves. This disquieting fact left CIA director Allen Dulles and others in the agency feeling quite vulnerable.

“Everyone had to face the reality of a possible change in political direction,” recalled Richard Bissell, second-in-command to Dulles. “Eisenhower was leaving office after two terms, and depending on which of the candidates, Richard M. Nixon or John F. Kennedy, succeeded him, an entire modification of the Cuban operation and other covert activities might conceivably take place in the near future.”

Bissell first briefed Nixon, the GOP nominee, in March 1960 about the agency’s covert Cuba operations—including use of “goon squads” paid to undermine Castro’s supporters—but with no mention of impending assassination attempts. In July 1960, after Kennedy became the Democratic nominee, Eisenhower directed the CIA to brief JFK on Cuba and other agency activities abroad.

Dulles met personally with the candidate at the Kennedy summer home in Hyannis Port, Massachusetts. Both men remained cryptic about their discussion.

“It is not my practice to give interviews,” Dulles told the press, as the two posed for photographs. He later minimized its significance: “I just told Kennedy what he could’ve read in the morning Times.”

The New York Times, like others in the media, portrayed the meeting as cordial and introductory, as “this tour of Mr. Dulles’ carefully concealed world.” But in fact, the Hyannis Port meeting was part of Dulles’ campaign to keep his job at the CIA. His behind-the-scenes courting of the Kennedys began years earlier and was far more extensive than most anyone knew, including Nixon.

Dulles focused his attention on Joseph P. Kennedy, the family patriarch. Years earlier, the two men had socialized at the Kennedys’ winter home in Palm Beach Florida, where they shared several wealthy friends. In 1956, Old Joe served briefly on a U.S. foreign intelligence advisory panel but came away unimpressed with the CIA. “I know this outfit and I wouldn’t pay them a hundred bucks a week,” he groused.

The following year, Dulles met privately with the senior Kennedy at the family’s Palm Beach estate and underlined his keen interest in remaining America’s espionage chief. “He (Dulles) is very aware of the fact that Jack may be the next President,” Joe wrote to a close confidant at the Vatican after the 1958 Dulles meeting, “and while he had always been very friendly to me, I think that he is more than ever anxious to please.”

During several Florida sojourns in the mid-1950s—often to visit a mutual friend, oil millionaire Charles Wrightman—Dulles chatted at get-togethers with Joe Kennedy’s son, the ambitious Senator from Massachusetts.

“I remember at the time that Jack Kennedy was working on his 'Profiles in Courage,'” Dulles later recalled, referring to JFK’s Pulitzer Prize-winning book. “The contact was fairly continuous because my trips to Palm Beach were quite frequent. He was very often there. And whenever he was there, we always got together. I respected his views. I thought he had a very keen appreciation of foreign problems, and being in the intelligence business, I pumped him as much as I could to get his views on things and his reaction to things.”

JFK loved Bond’s bravura style and so did his wife, Jacqueline, who gave Dulles a copy of Fleming’s novel, “From Russia With Love.” In March 1960, Kennedy invited Fleming to be guest of honor for a private dinner at the Senator’s Georgetown home in Washington D.C. Kennedy also invited Dulles. At the last minute, however, the director couldn’t attend, so he sent along a surrogate.

During dinner, the talk turned to Castro’s Cuba. Kennedy asked the James Bond author how best to topple the fiery Communist tyrant.

Fleming then reeled off a fanciful list of methods to eradicate Castro and any memory of him. As one scare tactic, he proposed the CIA fly a huge cross across the Cuban night sky as sort of a Second Coming, a fake divine warning to Catholics about their atheist leader. Fleming also suggested showering Havana with pamphlets claiming that nuclear testing by Fidel's pals in the Soviet Union would bring about radiation poisoning, enough to cause impotence and for bearded men to have their hair fall out.

Kennedy was amused by Fleming's comments. Apparently Fleming didn’t need to mention “honeytrap” sexual seduction techniques by an attractive double agent played out in his 1957 novel “From Russia, With Love.” Kennedy told Life magazine it was one of his personal top ten favorite books. Defending his old boss, former aide Arthur M. Schlesinger Jr. later dismissed JFK’s fondness for Fleming’s spy thrillers as nothing more than “a publicity gag”.

But the next day, when informed about the dinner talk, Dulles contacted the novelist, serious about the agency adopting his James Bond-like ideas.

"Allen admitted that the flamboyant Bond bore ‘very little resemblance’ to a real spy, yet to a certain degree both he and Kennedy conflated reality with the Bond novels," observed Stephen Kinzer, a Dulles biographer. "It was a case of life imitating art imitating life, as when gangsters watch gangster movies for tips on how they should behave.”

Dulles liked the heroic impression of the CIA fostered by the Bond novels. He kept a full set of Fleming’s books, such as “Casino Royale and “For Your Eyes Only,” in his home library. “Some of the professionals working for me in the CIA never could understand this weakness of the Boss,” Dulles admitted about his James Bond fixation.

Perhaps most inexplicable was Dulles’ directive to the CIA’s technicians to duplicate as many of Bond’s cinematic spy devices as possible in real life. In conversations with Dulles, Fleming wasn’t impressed with the CIA’s super-secret U-2 spy plane and other aerial reconnaissance. Instead he suggested “special devices” for undercover agents on the ground. One successful example was a spring-loaded shoe from which a poisoned knife jolted out of the toe. But CIA scientists found it too difficult to recreate a homing-beacon device inside a car to track its location as seen in “Goldfinger,” the famous Bond flick.

“When a new Bond movie was released, we always got calls asking, ‘Do you have one of those?’,” recalled Robert Wallace, former director of the CIA’s Office of Technical Service. “If I answered ‘no,’ the next question was, ‘How long will it take you to make it?’ ”

Ultimately, the search for the right poison to kill Castro was placed in the hands of the agency’s top expert, Dr. Sidney Gottlieb, a man known as the “Borgia of the CIA.” Dulles, appreciative of life’s ironies, was amused by the euphemism given to Gottlieb’s task force within the CIA’s Technical Service division. This gruesome effort, devoted to homicide and venom, was called “the Health Alteration Committee.”

Within the CIA, Gottlieb reigned as a sort of mad scientist, a chemist sanctioned by the agency to come up with new ways of killing. Emboldened by Dulles and Bissell, Gottlieb became the agency’s “Dr. Strangelove”, as he later admitted, with a fondness for inventive methods that rivaled the fictional scientific wizard “Q” in James Bond movies.

In particular, Bissell pushed the CIA lab chief to come up with numerous gadgets and deadly potions to use against America’s perceived enemies. Bissell wondered about a “death ray” projected from a long distance or using animals like cats as living bombs. “He fancied himself a technological promoter and entrepreneur,” Gottlieb recalled of Bissell. “He wanted to know, could you assassinate someone without anyone ever finding out about it?”

Imitating the world of James Bond, regardless of its practicality, was undoubtedly a good political move for CIA director Dulles in seeking re-appointment by Kennedy. However, JFK was even more impressed by Dulles’ lieutenant, Richard Bissell, whom he met at a subsequent dinner party given by journalist friend, Joseph Alsop. The private discussion was set up for JFK to learn more about the CIA’s operations. Bissell later said he told Dulles about the encounter, but declined to serve as a political double agent for the Kennedy campaign.

“I found Kennedy to be bright, and he raised a number of topics on which I had something to say,” Bissell recalled. “I made it clear to him, however, that I was still working for Eisenhower and therefore could not do anything of an active nature for him. I also told him truthfully (although perhaps inappropriately since I was part of the current administration) that I agree with most of his philosophy.” In a letter to a friend, Bissell said he believed JFK’s aides understood “the extreme crisis that we are living in” with the Cold War and that “the Democrats will be far less inhibited in trying to do something about it.”

Kennedy liked Bissell’s Ivy League background but also his rambunctious style. Like James Bond, Bissell was notorious for speeding through one-way streets in Washington whenever urgent duty called. Later asked by aides whom he might trust in the intelligence community, Kennedy gave one name: Richard Bissell.

After Kennedy’s victory in November 1960, the new President-elect promptly called both Dulles and longtime FBI chief J. Edgar Hoover. At his father’s insistence, JFK asked them to stay in their highly sensitive positions. Later that November, Dulles flew with Bissell to the Kennedy winter home in Palm Beach, Florida to further brief the soon-to-be President on the CIA’s covert operations around the world, especially in Cuba.

But neither Dulles nor Bissell told Kennedy about the two mobsters and their Castro assassination plan, by then in full motion. It was the kind of secret that James Bond would know how to keep.

Thomas Maier is an award-winning author, journalist, and television producer. His book "Masters of Sex" was the basis for the Emmy-winning Showtime drama that ran for four seasons. His other books include "When Lions Roar: The Churchills and the Kennedys"; "The Kennedys: America's Emerald Kings"; "Dr. Spock: An American Life" (named a "“Notable Book of the Year" by the New York Times); and "Newhouse: All the Glitter, Power and Glory of America's Richest Media Empire and the Secretive Man Behind It" (winner of the Frank Luther Mott Award as Best Media Book of the Year presented by the National Honor Society in Journalism and Mass Communication). He has worked as an investigative reporter for Newsday for over thirty years.