"Old Town Road" has become a flashpoint for dialogue around genre, race & the exclusion of black artists in country 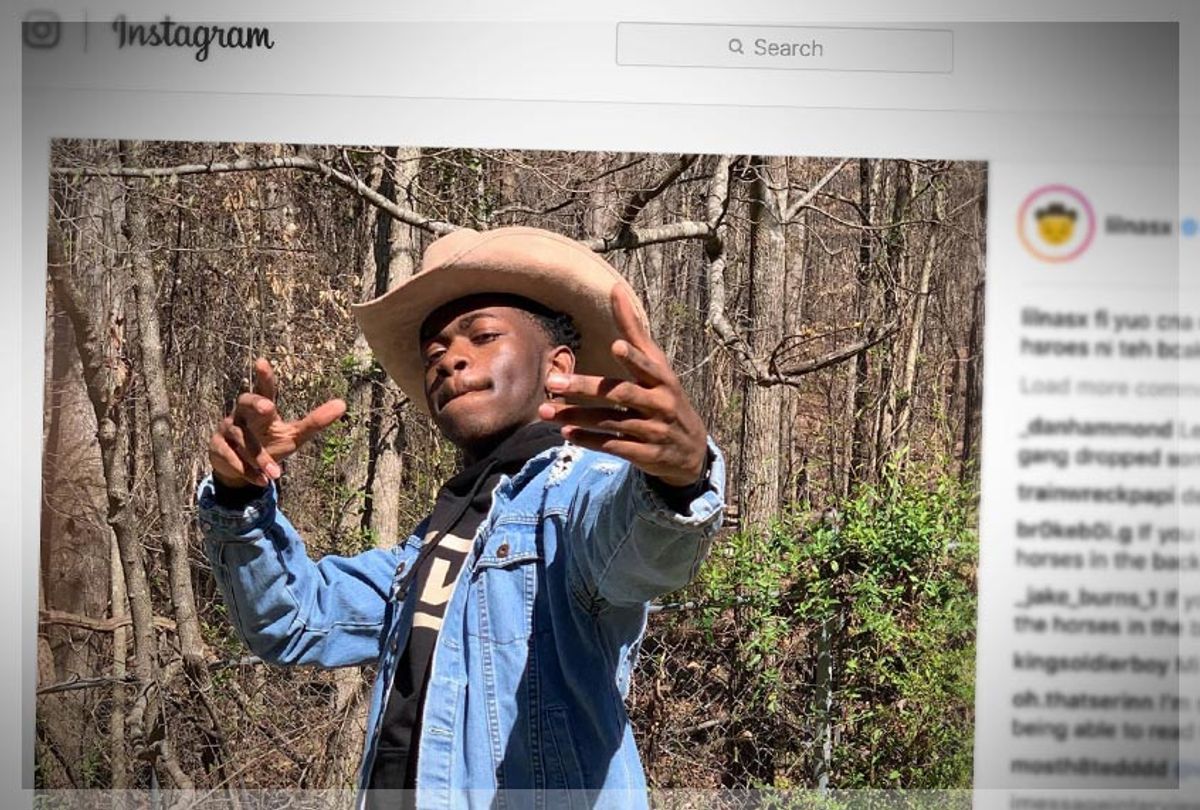 In Atlanta last weekend the sun beat down; the hot, Southern air hung thick and moist already, not even halfway into April. In the historic district of Sweet Auburn — a central location in the Civil Rights movement and for black entrepreneurship — families flocked to visit Dr. Martin Luther King Jr.’s childhood home, famous church and grave site. On the roads, the country-trap sound of Lil Nas X's "Old Town Road" poured out of so many car windows. The intoxicating bass line and banjo strums filled the air, indicating that "Old Town Road" is bound to be a defining song of the coming summer.

Lil Nas X's viral country rap hit "Old Town Road" soared to No. 1 on the Billboard Hot 100, Billboard announced Monday night, on the eve of the Atlanta-born artist's 20th birthday. While he first released "Old Town Road" — a sonic mash of banjo, a Nine Inch Nails sample and trap — in December 2018, over the last few weeks its popularity has skyrocketed, and the genre-blurring single has become a flashpoint for dialogue around race and genre, segregated charts, and the long exclusion of black artists in the country music industry.

Lil Nas X, neé Montero Lamar Hill, croons the chorus of "Old Town Road" with a Southern drawl and delivers his verses about cowboy hats and infidelity with an exaggerated twang, punctuated by a hip-hop sub bass. The song is simply infectious, the kind that stays in your head for weeks on end, a genre-straddler equal parts knee-slap and energetic head nod. As Lil Nas X told Time, "The song is country trap. It’s not one, it’s not the other. It's both."

In March, "Old Town Road" appeared on three charts simultaneously: the Billboard’s Hot 100, Hot Country Songs, and Hot R&B/Hip Hop Songs. But after just a week, Billboard removed the single from the Hot Country Songs chart. "While 'Old Town Road' incorporates references to country and cowboy imagery, it does not embrace enough elements of today’s country music to chart in its current version," Billboard told Rolling Stone in a statement.

The move followed this op-ed published on the website Saving Country Music, "Billboard Must Remove Lil Nas X’s “Old Town Road” From Country Chart," which declared, "Including Wild West signifiers or references to horses in no way qualifies a rap song with a trap beat as country. Furthermore, Lil Nas X is not professing to be a country artist. He’s not signed to a country label, and has no affiliation to the country industry whatsoever."

But Lil Nas X is no less a country artist than he is a rapper. He gained prominence on social media by running a Nicki Minaj fan account and posting memes, before his followers reportedly encouraged him to make music. "Old Town Road" is his first bona fide hit, ascending first on the video app TikTok and inspiring countless memes and tributes. Lil Nas X is the product of the Internet, and through his own savviness he crafted a single with all the elements of viral possibility: quotable lyrics, a contagious hook, a trap beat, meme-ready imagery and innovation with the overlap of country sounds, making "Old Town Road" stand out on the crowded floor of online music.

The action from Billboard only escalated the popularity of both artist and song, as social media erupted, calling his exclusion from the country charts racist. The controversy came less than three years after Beyoncé's country song "Daddy Lessons" was rejected for consideration in the genre at the Grammys, a single that "also got relegated to the R&B chart when the only thing R&B about it is that it’s sung by a black woman who came out of that genre," Dan Reilly wrote for Vulture. And of course, the current debate is happening more than 55 years after Ray Charles — rarely credited with reimagining country music — brilliantly covered country singer's Don Gibson's "I Can't Stop Loving You," as part of his album "Modern Sounds in Country and Western Music."

"'Old Town Road' "should’ve been included on the country charts from the outset," music journalist and historian Dart Adams told Salon. "Black artists were making country from the inception of the genre." He added that Billboard's removal of the song from the country chart was absolutely steeped in racism.

Shane Morris, who previously worked for Sony Music in Nashville, according to LinkedIn, tweeted that Lil Nas X "was kicked off the Billboard country charts because the (mainstream) terrestrial country music market is filled to a surfeit with racism and bigotry."

In his thread, he continued, "What's the difference between Kacey Musgraves, Maren Morris and Lil Nas X?. . . He still doesn't play guitar, but the real problem here is that Lil Nas X is a black man, from Black Hollywood, AKA Atlanta."

Morris and Adams were far from alone, as many people questioned the sincerity of Billboard's decision. "It’s a simple matter of people responding to a clear case of hypocrisy and trying to keep a genre 'pure' that never really was," Adams told Salon. "If Cowboy Troy, Big & Rich, Jason Aldean, Kid Rock and Uncle Kracker could be accepted by country audiences, then so should Lil Nas X."

As both Adams and Morris indicated, white country artists who blend genre are allowed to cover and experiment with a wide sonic range, while still being able to maintain their footing on the country charts and in the country music world — a freedom that has never been extended equally.

"After Billboard made its statement about 'Old Town Road,' a rep for the company added that Lil Nas X’s race played no part in their decision—a fraught comment for those familiar with the charts' history of tacit segregation," Sheldon Pearce wrote for Pitchfork. "Billboard’s R&B Songs chart, known in certain eras as Race Records or Hot Black Singles, was built on a racist industry politic: the idea that black music was made for and by black people, and white music was made for and by white people. Many black artists who don’t make R&B are still relegated to that box, while white artists have the freedom to roam freely in historically black genres. Top 40 radio has kept popular black rappers at bay, despite admitting their white counterparts."

Despite the ire from certain pockets of the Nashville country scene and from the founder of Saving Country Music, who has since only doubled down and called the controversy around Lil Nas X "the greatest existential threat to the integrity of country music as an institution I've ever seen," some country music artists have instead lent their support. Brian Kelley of Florida Georgia Line posted about "Old Town Road" on his Instagram and Bill Ray Cyrus tweeted at Lil Nas X confirming that he's tuned in.

Two days later, the remix to "Old Town Road" with Cyrus dropped, a full circle moment for Lil Nas X, who tweeted back in December, when he first released it online, asking Twitter for help to get Cyrus on the track.

"It was so obvious to me after hearing the song just one time. I was thinking, what’s not country about it?" Cyrus tweeted later that day. "What’s the rudimentary element of a country and western song? Then I thought, it’s honest, humble, and has an infectious hook,  and a banjo.  What the hell more do ya need?"

Not only did Cyrus accelerate an already joyful hit with the addition of his incredible verse and vocals, but it was a clear move of solidarity — especially considering one of the lines from the critical Saving Country Music op-ed, which added to the reasons why "Old Country Road" should not be on the country charts: "There are no country artists guesting on the track like you had with Bebe Rexha’s collaboration with Florida Georgia Line’s 'Meant To Be.'"

Cyrus fixed that and showed that while the industry as a whole continues to perpetuate racism, not every country artist is falling in line.

People will try to undercut what Lil Nas X has done since he seemed to stumble into music rather than live and breathe it. But there's no doubt that "Old Town Road" has sparked a much-needed dialogue about genre and the historical and enduring confinement and displacement of black artists, especially in country music. And even if Lil Nas X is just a conduit for these critical music conversations, "Old Town Road" is undeniably pure sonic bliss. He, with an assist from Cyrus, has brought musical audiences together, for the summer and hopefully beyond.