Major "Game of Thrones" prediction: The Cleganebowl is coming — finally

After 7 seasons of build up, could fans finally get to see Gregor and Sandor Clegane face off in battle? 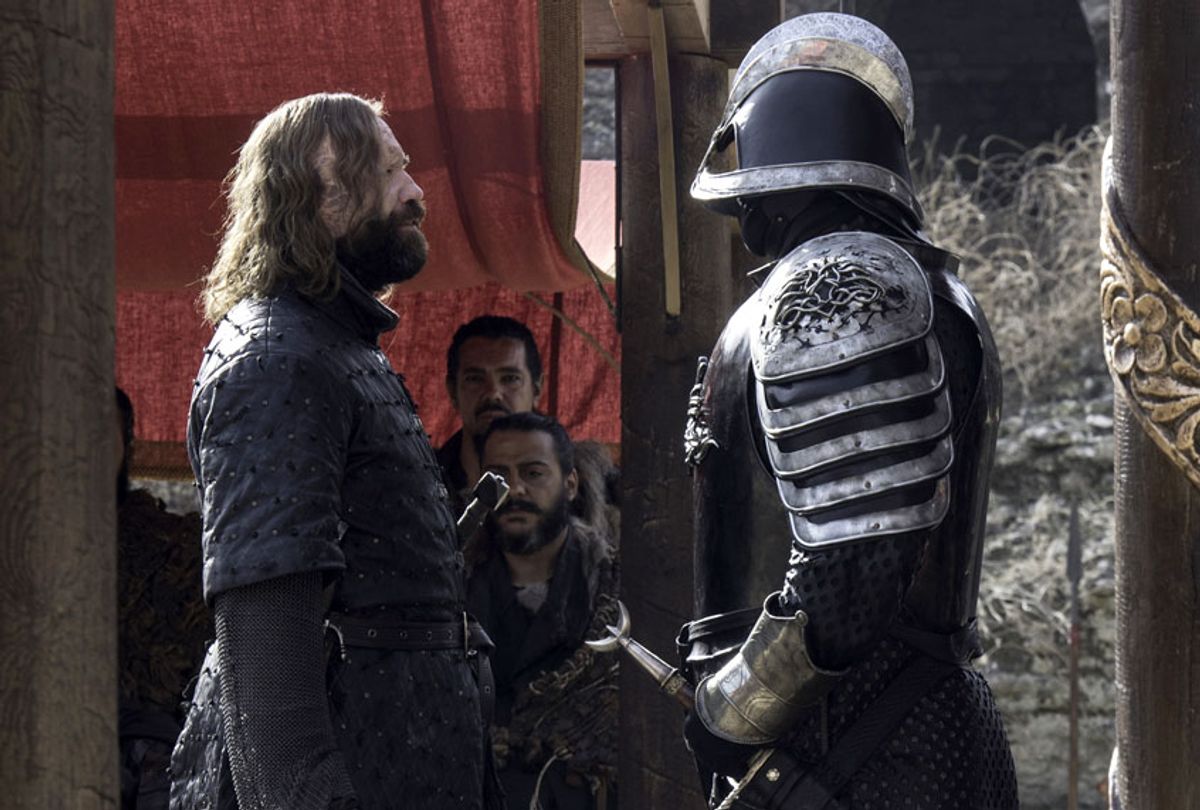 Rory McCann as Sandor Clegane, and Hafþór Júlíus Björnsson as Gregor Clegane in "Game of Thrones" (Macall B. Polay/courtesy of HBO)
--

Going into the eighth season of HBO's "Game of Thrones," fans are practically throbbing with excitement of the possibility that many long-standing questions will finally be answered. Will humanity save itself from the White Walkers? Will Jaime Lannister finally crack and kill his sister-lover? Will Jon Snow and Daenerys Targaryen be welcoming, after all that boat sex, the next Last Targaryen?

But true fans, the people who have read every book and spend hours debating every wild theory, have one overriding question: Will we finally get a Cleganebowl?

"Cleganebowl" is the shorthand for a long-standing fan theory that holds that in some way or fashion, there will be an epic duel between the brothers Sandor and Gregor Clegane. It's not just because they both have nicknames — The Hound and The Mountain, respectively — that were tailormade for photoshopped jerseys over their armor. It's because the relationship between these two secondary characters is one of the richest in the story, both personally and thematically.

On the show, the story of how Gregor burned Sandor as a child for playing with his toy is legendary. In the books written by George R.R. Martin, however, the details evoke the larger ideas Martin is exploring with the relationship between the brothers. The toy that Sandor takes from Gregor was a "wooden knight, all painted up." Gregor was five years older, and so "the toy was nothing to him," but his possessiveness led him to burn Sandor nearly to death over it.

The symbolism in this story is rich: as it plays out in their adult lives, Gregor is an anointed knight and Sandor is, by choice, not. Gregor is a psychopath and a brute with no honor at all, and so his status as a knight disillusioned young Sandor, who had once really believed in the romantic ideal of chivalry.

Sandor is, in other words, the classic cynic who is a romantic at heart. He repeatedly does brutal and evil things, believing that he's just dealing with the world the way it is, but his hatred of his brother and unwillingness to be in a club that would accept such a man reveals that, somewhere deep inside, Sandor still believes in higher ideals. His gruff but real love for the Stark girls, too, is a constant reminder that Sandor, try as he might, cannot help but hold out hope that there is still some goodness in this world.

Because of this, it feels inevitable that the conflict between the brothers will be gloriously illustrated in a mano a mano battle. Some fans have grown skeptical over the years that it will ever happen, even as Sandor starts to seek redemption and Gregor, as a zombie, becomes an even more mindlessly evil character.

But then, near the end of the last season, Gregor and Sandor met face to face for one scene in which Sandor issued a threat to his zombie brother. "You know who’s coming for you," The Hound said. "You’ve always known."

At this point, it is fan tradition to find an airhorn and blow it loudly (or in lieu of that, using an iPhone sound effects keyboard to approximate the tone).

How will it happen? There are so many reasons to stage duels on "Game of Thrones," but the widespread assumption in the fandom has long been that Cleganebowl will be ordered through a trial by combat.  There's good reason to believe this, as there have been two famous trials by combat on the show — both to save the skin of Tyrion Lannister — and so, following the rule of threes that is prominent in fairy tales and fantasy stories, we should expect one last trial by combat before the show ends.

But there's another kind of duel that the show has long hinted at, but we've never seen played out fully onscreen: The single combat, an ancient and medieval tradition in which a traditional battle is eschewed in favor of two champions stepping forward to duel instead.

The single combat is offered for the obvious reason that it saves lives, a concern that has grown more prominent in recent seasons of the show, as war continues to take its toll on the people of Westeros. And it's been offered twice on the show before: Jaime Lannister offers it to Robb Stark in the second season, and Ramsey Bolton to Jon Snow in the sixth.

In both cases, the offer is declined, though the narrative gives viewers a taste when Ramsey and Jon end up in a dramatic mano a mano fight at the end of the Battle of the Bastards. By the rule of three, however, that means it's likely to be offered one more time. And this time, I predict the offer will be taken.

To be certain, it's not like the Night King will step forward and agree to a duel against Jon Snow. Instead, the context will likely be the brewing fight between Cersei Lannister and the united forces ofJon Snow and Daenerys Targaryen. As we learned last season, Cersei plans to fight a war with her challengers after the war with the dead, hoping their army will be weakened enough that she can decimate what remains.

So this is my prediction: Instead of another huge battle between human armies, which will be a letdown after the human vs. zombie war that's expected earlier in the season, the political conflict will be resolved in single combat, with the Hound standing for the Stark/Targaryen side and the Mountain standing for Cersei. Cersei will agree to this instead of a battle because she knows that Daenerys has dragons and so can still best the Lannister forces, even with a weakened army. Daenerys and Jon will agree because they don't want more people to die needlessly.

And audiences will agree because we will finally get Cleganebowl, probably in the last episode of the series.