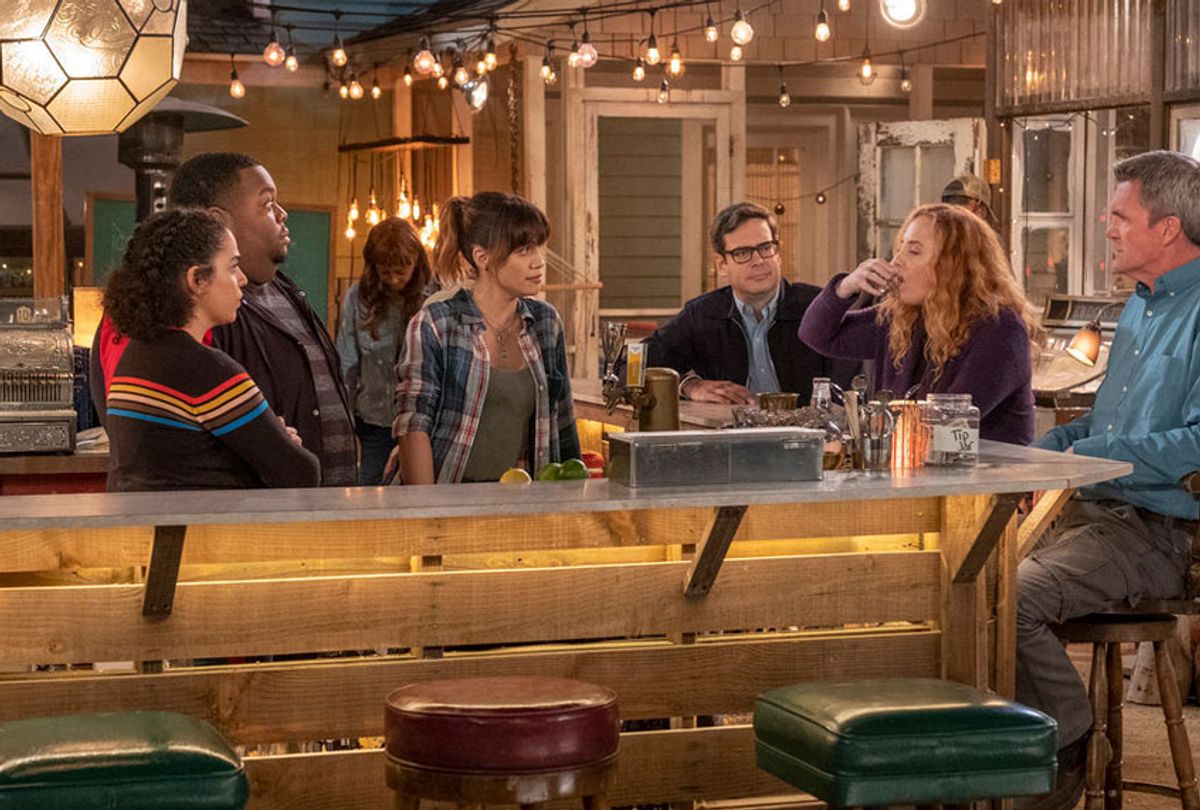 “Abby’s” debuted a couple of weeks ago on a current of comparisons to “Cheers,” some of them dismissive. It’s not as if that assessment needs explaining. Both are NBC comedies set in bars, centered upon a charismatic bartender — here, played by Natalie Morales — tending to the emotional needs and inebriation levels of loyal patrons.

The gang surrounding Morales’ Abby, a former Marine Staff Sergeant, is no less loyal than the men and women supporting Ted Danson’s Sam Malone. But Sam’s Boston bar is a home away from home. Abby’s eponymous drinking establishment is located in her backyard, making it not entirely legal.

“Also, let’s look the reason ‘Cheers’ was the best show … well, there are 500 reasons 'Cheers' was the best show,” executive producer Mike Schur told Salon. “But remember the theme song says, ‘Sometimes you wanna go where everybody knows your name.’ And that was such a powerful idea. ‘Yeah! I do! I just wanna go to a that place where people know me.’”

“Abby’s,” airing Thursdays at 9:30 p.m. on NBC,  is the first multi-camera sitcom produced by Schur (“Brooklyn Nine-Nine,” “The Good Place”) as well as the first to be filmed outside. In casting Morales as the title character, Schur and series creator Josh Malmuth made her the first Cuban-American actress to lead a TV series. Abby also reveals, early on, that she is bisexual.

Although Schur didn’t create “Abby’s,” the opening episode borrows from Schur’s winning formula for writing chosen families, romances and relationships by approaching her various bonds with patrons from a core of friendship and respect. Her nextdoor neighbor Beth (Jessica Chaffin) considers Abby to be her best friend. Rosie (Kimia Behpoornia) operates as her bar manager, James (Leonard Ouzts) is supposedly the place’s bouncer, although it barely needs one. And Fred (Neil Flynn) is the place’s lovable grump.

“Abby’s” realizes a slice of society that feels like it’s steadily disappearing, a meeting place where nobody fights, where mobile phones are verboten and everybody finds common ground in the enjoyment of a good drink and, if the grill is going, a charred snack.

By design, “Abby’s” is not a loud, brash comedy, and in all honesty, this is reflected in its modest ratings. But it’s also dabbling in a contradictory part of our divided culture by setting the action in a space that blurs the line between public and private, where a woman has ownership over the visitation terms and everyone returns the favor of her hospitality by protecting its specialness. In essence, Abby is running a bar version of an Airbnb.

I spoke with Schur and Malmuth about this aspect of “Abby’s.," and the ways that they hope their series speaks to a few important needs in our anxiety-ridden times that aren’t being met — starting with dreaming up the 2019 version of place where everybody knows your name, and they’re really glad you came.

Upon first viewing “Abby’s” a lot of critics and viewers immediately make the “Cheers” connection. And “Cheers” is fueled by the “chosen family” formula. But I think one aspect worth exploring, more closely is the fact that “Abby’s” takes place in someone's house. That adds a special ingredient that almost allows people’s shoulders to drop a bit. Just like one of the characters says, the one thing we can come together around right now is drinking.

Let's talk a little bit  about the choics to have the action take place in someone's home.

Josh Malmuth: When we first started talking about the show, because it's so intimate — you're in someone's house — it really led to these ideas about, how can this be different than a regular bar? And one if the things that came up immediately was Abby could've designed this place to be customized to her tastes exactly. The fact that it was kind of an extension of her personality makes it a much richer environment.

And yeah, there's this intimacy of people hanging out at a friend’s house, right? You're not out in the world. You're in this kind of protected environment.

Schur: There's also this weird thing in our culture now, where if you want go out somewhere, but you don’t want to drive, you use your phone and you get into some guy's Toyota Camry. It’s his car. It's like the barriers between what you would think of as a professional and amateur are completely broken down now, right?

You used to call either a car service or a taxi cab and it had markings on it and it was painted differently. Now a guy pulls up and you just get into his car and he drives you somewhere. That's so weird.

And this is how the world is now. You say, “let's go stay in Chicago or New York” or whatever. You go online and you find someone's house and you just go live in their house for a week.. I'm not saying it's bad, it's just the way that we just exist in very basic ways — in cars or on vacations or whatever — has completely changed into this thing of like, "Well I'm just sharing this space with someone and this is a person's life that they've invited me into." And everyone became cool with it. Instantly.

It's this weird DIY thing that's happening now, where people are dissatisfied with the way things are. They decide they can just do it themselves and that's kind of the fun of it.

Malmuth: And I think at the same time, because now we have Yelp and we have Trip Advisor and we have social media, anything cool or interesting or different does not stay a secret for more than five minutes. So to have a place like Abby's, where all that exposure is explicitly prohibited, there's something really enticing about that. I wish I had a place I could go that’s like that.

That is one aspect of “Abby’s” that I find very interesting, in that the plot operates in this new area of commerce, where private space intersects with public. It’s an interesting setting for a sitcom, and for the audience. There’s the meta level of knowing viewers connect on a very personal, emotional level to characters we love and know in part because it’s an illusion of a place we want to be that seems real. But that’s also true to the characters in “Abby’s.” They’re regulars, and her friends, but her people are still paying for drinks.

I wonder what that says about where we are now as a culture, and why this kind of place would be so appealing to viewers. Besides, you know, the fact that it's taking place in her backyard.

Malmuth:  There's one part of your question that I found interesting, and it is something that we talk about in the writer's room a lot. That is, where does the relationship between our patrons and Abby, when does it become personal and when is it professional? We dealt with that in a really explicit way in one episode with Beth [Abby’s next door neighbor] grappling with, "I thought this was a friendship and the way you're behaving, you're making me feel like you don't see me that way."

There are a lot of bits throughout the series that kind of play with this notion of people wanting be Abby's best friend, but then she gives them a look and they're like, "Well, I know this is the relationship we have. It is bounded in some way."

We exist in this time now where everybody is shouting for attention, constantly, all day on Twitter, on Instagram. Everybody is so hungry for that . . . and I think being a regular at a bar is, to me, an incredible realization of being known, being seen . . . and understood.

Schur: Just routine and a place of calm. Josh is from San Diego.  To me it was a perfect place to set “Abby’s” because San Diego to me is just, ocean breeze and everything is calm and the weather is always exactly the same. There's something reliable about it. And that’s what we were going for, to sort of set the tone of just, "It's OK, everything's OK. The world is insane, everybody's insane, politics are insane. But just come here and sit down for half an hour and have beer and it'll be fine." That's a very pleasant dream when I say it like that!

But that sense of ease also helps you establish some important things about sexual orientation and identity as a matter of course, as a part of who these folks are, not as some giant deal.

Schur: And that was huge. Abby tells to Bill and the audience, in answering a question, that she's bisexual … she happens to mention that, and it's not really brought up again.

That’s much more true to the experience of getting to know someone in your life. You don't just get this information dump. These details come out as relationship develop.

Schur: I have a friend who I've known for a long time, who I don't see all the time … I see him very rarely, actually. But he has a 16-year-old son and the other day he was casually like, "My son's boyfriend is coming over." And I was like, "Oh!" And then, we move on. I didn't even say it out loud, it was just — in the same way that someone says, "I'm originally from Kentucky." And you go, "Oh! I didn't know that." And then you move on. That is now the experience of most people with this stuff and, I think it's good to present it that way.

Malmuth: That’s what makes “Abby’s” feel special to me. We’re being, in a very intentional way, uplifting, and pacing it. We're not shouting for attention as much, and I think that maybe speaks to a desire that people might have, to slow down a little bit and watch something that unfolds in a slightly slower way.

Schur: Yeah. The shooting outside helped with that, I think. Outside is just so peaceful ... so quiet and the audience is really small because we don't have enough room up there for the typical live audience. What is it? It's usually 250 or something. We have 99 people or so.

That probably also changes aspects of the performances, too. A lot of times with multi-cams there's this necessity to play to the back row.

I watched a multi cam that shall remain nameless recently, an old episode, and as Act 1 started with the main character saying, "Hello." And there was an enormous laugh at that. And I was like,  “On what planet is that funny?” I think that's why people who don't like the format, don't like it for that reason. They feel like they're being lied to or they're being pressured into something.

Schur: Yeah, it's not a joke. Laugh when there's a joke, fine. But the outdoor vibe of just this pleasant quiet, sort of casual, laid back tone. . .shooting it outside was a huge boon for that, I think.