The new version of Victor Hugo's tale has no familiar tunes to sweeten its tragedy. That feels very fitting now 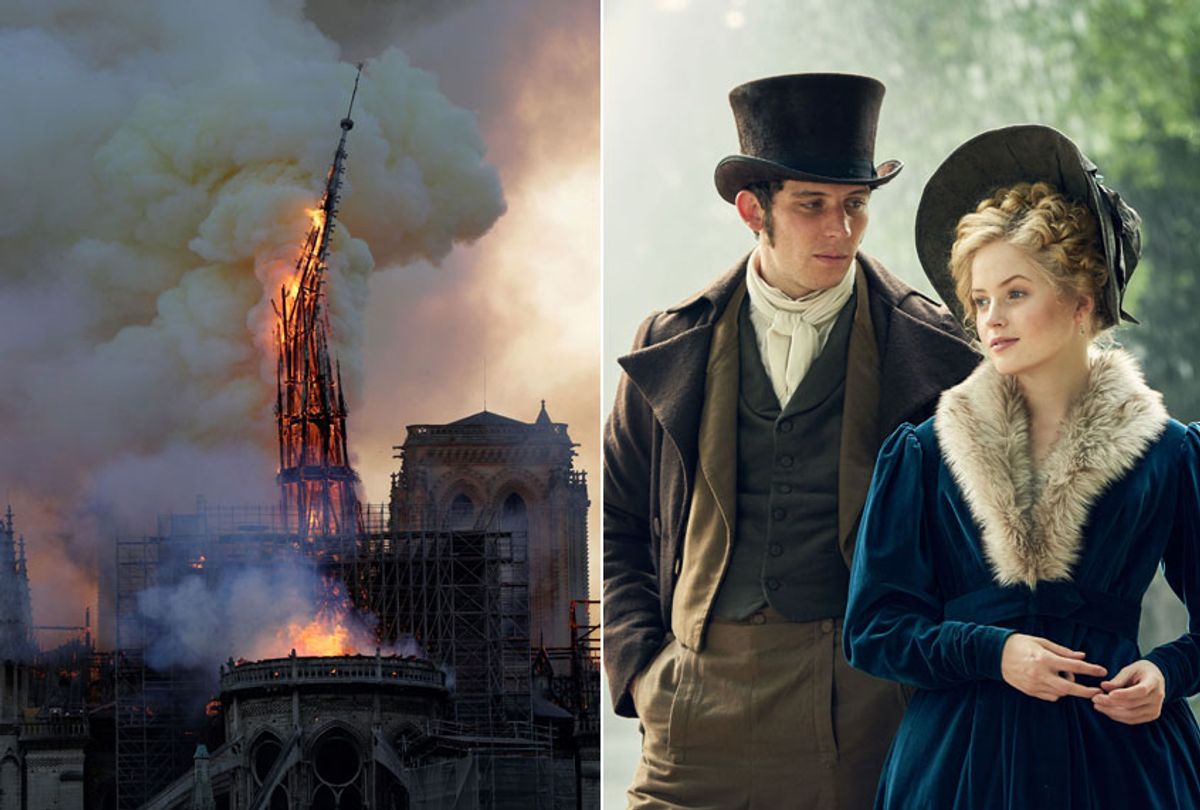 The steeple of the landmark Notre-Dame Cathedral collapses as the cathedral is engulfed in flames in central Paris on April 15, 2019. Josh O'Connor as Marius and Ellie Bamber as Cosette in "Les Misérables on Masterpiece." (Getty/Geoffroy Van Der Hasselt/Courtesy of BBC/Robert Viglasky)
--

By way of processing the shock of watching Notre Dame burn in Paris on Monday, I turned away from social media, where livestreams of the spreading flames were sadly plentiful, and turned on the latest adaptation of “Les Misérables,” currently airing on PBS’s “Masterpiece.”

This was mainly out of obligation, to be honest. The six-part series aired its first episode Sunday, the same night as the debut of a certain show starring zombies, dragons and queens. It is currently streaming online and via video on demand. Scheduling new installments of the “Masterpiece” epic as time-slot competition to the most popular show on the planet is pure folly; then again, something has to air at 9 p.m. Sundays. If you can’t serve up the flashiest show on television, might as well come in second.

Except this “Les Misérables” trades in substance, not dazzle. It has no music to it — literally. No renditions of the Broadway musical’s most familiar ditties such as “Master of the House,” no “On My Own.”

Andrew Davies’ adaption of Victor Hugo’s literary hulk (my softcover edition is 1,232 pages long) relies on the beholder to drink in the bitter imagery and soften her heart to the plight of characters who often cannot outrun their past failings regardless of what they do.

And although Hugo’s other great work, the 1831 novel “The Hunchback of Notre Dame,” has a direct influence on the history of Notre Dame — Tuesday it soared the top of Amazon France’s n the bestseller list on Amazon France — the spirit of this new “Les Misérables” is better suited the age in which we collectively bore witness to a conflagration consuming one of the world’s great monuments.

On social media the chorus could not quite find true harmony in our collective mourning. People shared photos taken from recent visits and musings as to what Notre Dame means to them; others stonily called out the Catholic Church’s various sins over the centuries, citing everything from its participation in and funding of the brutality of colonialism to its protection of sexual abusers. Still others scoffed at what they saw as another example of manufactured grief showcases by way of Twitter.

The voices became a dueling chorus between the Fantines and Jean Valjeans of the world and the Javerts, to look at it another way. In that respect, the PBS version of “Les Misérables” needs no melodies to sell it, because the sorrow and the harsh lawful judgment demonstrated throughout the story, as well as the grace radiating through its performances — with Dominic West as Valjean, Lily Collins’ Fantine and David Oyelowo’s Javert — are its songs.

Presenting the story as an abridged version of Hugo’s writing forces the viewer to absorb the misery its characters endure without the sugar of melodic performance, without distracting spectacle that allows us, in a way, to emotionally split from the horror of what we're seeing.

And his makes it a diametric contrast to "Game of Thrones," a pure act of spectacle and escapism. HBO’s epic is pure fantasy, even though it too has a historical basis, borrowing aspects of the plot from England’s War of the Roses.

But by incorporating mythical elements and magical forces, the series’ fans can emotionally detach somewhat from the tale’s tragedy. In no way am I suggesting that certain Monday mornings in the upcoming weeks won’t be bluer than usual as the show’s fans come to grips with the death of a beloved character or three in the previous night’s episode. But we can also count on such demises being rendered in ways fitting to how the character lived. Each will be a spectacle among spectacles.

This is what struck me as I watched a place to which I’ve made several pilgrimages over the years be devoured by an element as careless, cruel and unreasonable as flame. I abandoned my Catholicism years ago for the reasons the vocal critics who showed up on Monday listed, as well as much more personal ones. And yet I have laid some of the most significant prayers of my life at the stone feet of Joan of Arc; I have knelt in prayer at her chapel inside the landmark in honor of my deceased loved ones and the troubled living I hold dear. To see the spire fall felt like a conduit to the divine being broken, even though I can’t remember the last time I went to church on Sunday.

But for a portion of witnesses, at least some of those voicing their opinions on the Internet, bearing witness to the public destruction of a world landmark prized in part because it is a work of spectacle on a grand scale became a struggle between the desire to feel and remember, and an insistence on emotional remove, a mode of thought that insists, as we watch this grand wonder crumble in faraway France, that this is not about us, whoever “us” may be,  and it's certainly not about you as an individual.

The second episode in the series, airing Sunday, shows the tale’s tritagonist Fantine at her lowest point: she’s cut off all of her hair and sold it, along with her front teeth, in exchange for a measly sum of money to send to the Thenardiers, a pair of cruel grifters with whom she’s left her daughter. She’s already been fired from the factory where she found work. Left with nothing else to offer, and no other place of employment willing to take her, she’s turned to selling herself off piece by piece: first, her most prominent assets, then her body.

The sight of Collins’ Fantine in this version of “Les Misérables” brings to mind the word most  appropriate to the novel’s title: at her lowest point, she looks wretched.

Unlike Anne Hathaway, who won a Best Supporting Actress Oscar for her portrayal of Fantine in the 2012 theatrical version, Collins’s Fantine wears the gaps in her dental work like a badge of shame. The darkness in her mouth yawns wide at the viewer as she grimaces through physically and emotionally torturous encounters, particularly at the pivotal moment that a certain gentleman crosses her path.

The man is carousing and laughing with the other ladies of the evening, all in much better shape that Collins’ tragic heroine. And when he encounters her, he treats her like a joke. Asking for her rate, she responds, softly, with the offer of however much he thinks she is worth.

“How about… nothing, then?” he counters, roaring along with his friends. Fantine is too weak to offer much of a defense, only a plea for mercy.

“I have to live, monsieur,” she softly says, adding. “Same as you.”

The “gentleman” laughs in her face. “Same as me? Cheeky cow.”

In the musical version of “Les Misérables” this exchange is preceded by Fantine’s climactic solo “I Dreamed a Dream,” the kind of song that transfixes the audience, making it impossible to look away.

This is the song that made Susan Boyle famous, in case you may have forgotten. Back then Boyle’s looks were as frequently discussed as her angelic voice, after she found fame by way of a 2009 episode of “Britain’s Got Talent.” Would she have achieved international stardom if she hadn’t chosen that particular song? It is an anthem of human tragedy, one of the most beautiful created in modern times. And it romanced Boyle, a woman in her late 40s who had never been kissed, never gotten a chance to take center stage, into an international symbol of triumph.

Point being, we’re all made to be the same creatures under the sky, but not on the same playing field unless someone wills it to be so.

Central to “Les Misérables,” which was first published in 1862, are the various trials of Valjean, actual and spiritual, some imposed on him by Javert, the law enforcement officer obsessed with bringing him to justice for a petty crime for which he was never caught and tried. West and Oyelowo are outstanding individually and in the few tense scenes they share, because they each grapple uniquely with the concept of righteousness. Oyelowo’s assured severity evokes the weight of the law and righteousness as defined by man, which serves as Javert’s north star.

West on the other hand digs into the agony of Valjean’s ongoing spiritual conflict, as he’s constantly torn between doing the right thing by man’s law and following the way of divine justice. His life is a perilous tightrope walk between these poles, particularly when it comes to making amends for his failings by raising and caring for Fantine’s orphan Cosette (Ellie Bamber).

And there’s a comfort in engaging with “Les Misérables” denuded of the songbook that made Hugo’s 19th century story popular again among the late 20th century’s masses, particularly as we come to terms with what’s been lost in the fires that nearly destroyed a place many thought would stand forever.

The spire of Notre Dame has been replaced before; it fell in 1786. It has survived eons of natural deterioration and assaults at the hands of men, notably during the ages of Napoleon and French Revolution, two eras surrounding the main action in “Les Misérables.”

“The Hunchback of Notre Dame” and Hugo’s tragic story of the cathedral’s bell-ringer Quasimodo and his unrequited love for a gypsy named Esmeralda so thoroughly seduced 19th century Parisians that they were moved to campaign for the crumbling church’s restoration, an effort that spanned decades,  continuing even up to the day of the fire. If American Francophiles revisit the tale via the page or the various films it inspired in the coming days, no one should be surprised.

But I also hope that as part of that reconnection to history, more people balance the all-encompassing passion for “Game of Thrones” by also taking time to appreciate Davies’ latest take on Hugo’s other tale. “Hunchback” is a story set in Notre Dame, but “Les Misérables” captures the soft clash of emotions resulting from our insistent lamentation over its loss. It is a story that captures the essence of humanity and redemption, appropriate accompaniment for a great work of humankind revived time and again over the centuries, out of an urgent need to redeem what is best in us. That has been the case throughout many centuries, and it holds true even today.