Instead of making a simple performance film, Beyoncé slays with a stunning, powerfully historic piece meant for all 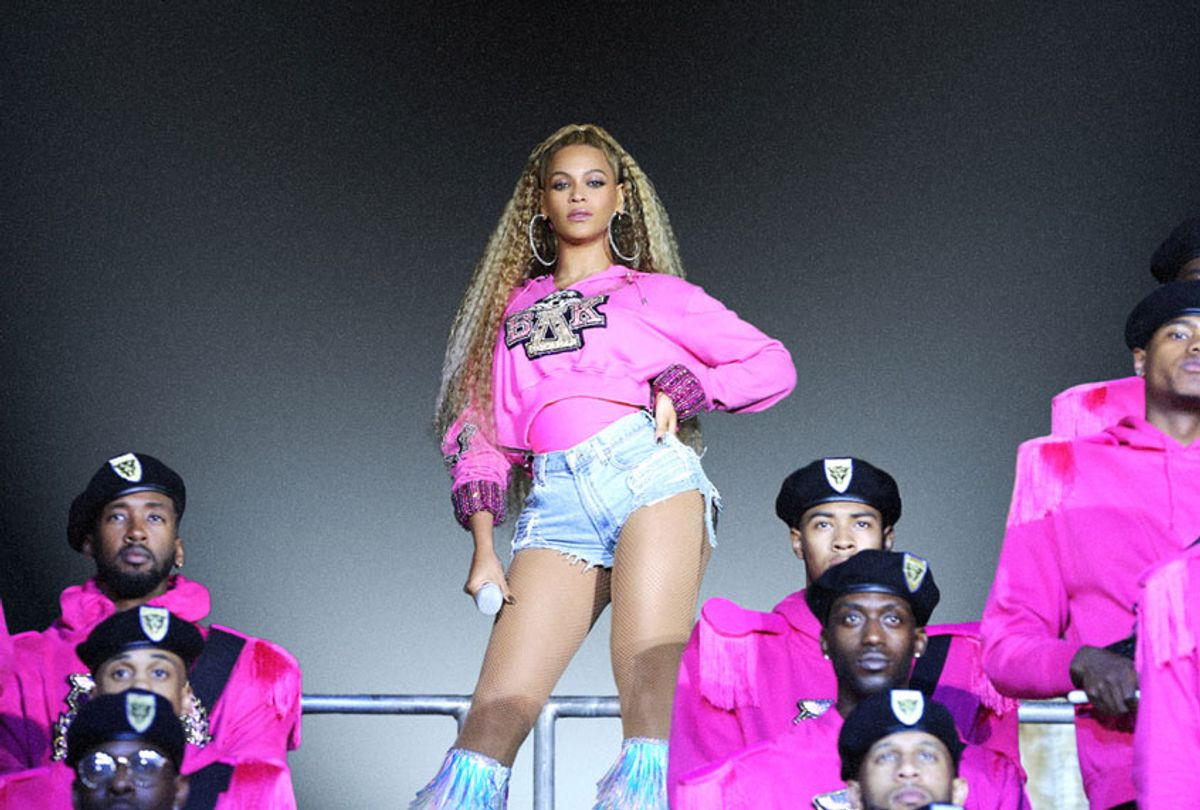 The racing heartbeat of  "Lemonade,” Beyoncé Knowles-Carter's ground-shaking 2016 visual album, is the scene in which she skips down the street in her floor-length marigold-colored dress, destroying all obstacles in her path with a baseball bat called “Hot Sauce.”

In “Homecoming: A Film by Beyoncé,” which dropped Wednesday on Netflix, it is the moment when she pauses after a burst of bleacher-thundering, catwalk stomping choreography to belt out a slow, luscious version of the Black National Anthem, “Lift Ev’ry Voice and Sing” accompanied by soaring stringed instruments.

Beyoncé takes her time, lingering on each line, each pause signaling her dancers to undulate in unison, creating a wave of bodies moving in, yes, formation. This is a short sequence in relationship to others, but it is enough for one to feel the energy of the air expand and contract around the performers, around Beyoncé herself, in the room where the observer is bearing witness. To say it is everything barely scratches the surface.

“Homecoming” is designed to be a deep drink of cool water in 2019 — in what feels, at times, like an endless desert burning with oppression.

Here was the first black woman to headline a festival typically attended by a majority white audience, covering the one cut most of the attendees who weren’t black probably wouldn’t recognize without a little bit of explanation. And she did it up front, about 10 minutes in, strolling confidently through to its statement of purpose: “Let us march on till victory is won.”

In that short passage the artist created a musically and technically flawless sequence, an immovable moment declaring her 2018 headlining performance at the Coachella Valley Music and Arts Festival, where the performance was filmed, to be a political watermark as well as a cultural one.

Later in the film, she regally thanks the audience to allow her to be the first black woman to headline the festival adding, eyebrows somewhat playfully cocked, “Ain’t that ‘bout a bitch?”

Beyoncé Coachella performance was all anyone could talk about in the summer of 2018, much in the way “Lemonade” became one of 2016’s most significant cultural moments. Unlike that album drop, however, her Coachella live show was available to a handful of her millions of fans around the world who had the means and luck to score a ticket to see her in person. It was also made available to live stream but, as any music fans know, it isn’t the same as being there.

But her film transubstantiates the energy of that live show into something entirely different. The special is part concert film, part documentary, part personal diary and home movie, revealing the sweat, grind, joy and pain Beyoncé, her choreographers, musicians and dancers poured into the eight months preceding the two-and-a-half-hour performance.

“Ladies. Are we smart? Are we strong? Have we had enough of the bullshit?” she declares to the thousands in the audience — reportedly Coachella’s best-attended concert of the festival’s history.

The show is full of electrifying moments her fans will ecstatically claimed, like the saucy, lingering stomp and-repeat lyric from “Sorry” where she turns the line “suck on my balls, balls!” into a step performance showcasing feminine strength.

As opposed to merely revealing the process as it is, however, the artist — who directed both her live performance and the film itself — chooses to create another level of art and dedication out of the rehearsal footage and her explanation of why she and her dancers pounded away for two-thirds of a full year on what would be one performance.

Beyoncé’s very presence on that stage, however, is its own history, one of which she’s aware. She entered wearing a full Nefertiti-inspired costume, crown on her head, a golden staff in hand. In a voiceover she says she could have simply come onstage wearing her flower crown and met the standards of a typical live performance. But this is not who she has demonstrated herself to be. Hence, when she stepped onto the mainstage in a space understood to be primarily white, she says she brought her culture – black culture – onto the boards with her.

As in “Lemonade,” the artist’s shared inner dialogue becomes a piece of the art. Then, her words were written by Somali-British poet Warsan Shire. Here they are hers, accompanied by onscreen quotes from such luminaries as W.E.B. DuBois, and audio clips featuring the voices of great artists who paved her way, including  Maya Angelou, Chimamanda Ngozi Adichie and others “Homecoming” ascends to something beyond a concert film.

One such moving moment serves as a statement of purpose, by way of a famous audio clip of an interview with Nina Simone: “To me we are the most beautiful creatures in the whole world—black people,” Simone’s says, her voice playing over images of Beyoncé’s dancers rehearsing. “My job is to somehow make them curious enough, persuade them by hook or crook, to get more aware of themselves and where they came from and what they are into and what is already there, just to bring it out. This is what compels me to compel them, and I will do it by whatever means necessary.”

To the wider audience “Homecoming” is an explosion of joy that bestows drops of education here and there. To African Americans it’s a love letter to black culture and history, a celebration infused with intentional symbolism and artistry presented to the wider world with no apology. “If you surrender to the air, you can ride it,” announces the title card opening the film, adapting a Toni Morrison quote.

Thus Beyoncé live show contains the astronomic level of artistry the Bey-hive has come to expect, enough that even those watching who didn’t recognize the numerous odes to HBCU culture – or even Historically Black College and Universities are, like, a thing -- had to have been satisfied.

Netflix dropped “Homecoming” with little notice and no media preview, similar to how HBO debuted “Lemonade” by ambush. The common notion of the communal viewing experience dying off with the ending of a certain drama will likely be disproven by this release, if the wide permeation of “Lemonade” is any indicator. To seal its place in springtime playlists, her remake of Frankie Beverly and Maze’s 1981 classic “Before I Let Go” (which incorporates a sample from Cameo’s “Candy”) makes its debut during the end credits.

Such statements and her other confessions add to the notion of “Homecoming” serving an definitive power fist in the air in a space made famous by many years’ worth of scantily-clad white girls walking around wearing Native American headdresses with no regard for their sacred significance. Surely in the days after that show last summer more than a few of those same girls ran out to look for gear inspired by Beyoncé’s fictional sorority BAK — which stands, naturally, for Beyoncé Alpha Knowles.

Of course the Balmain-designed costumes, choreography and even the interlude skits in “Homecoming” convey multiple messages: the black and yellow are a nod to the Beyhive, of course. Or they could be a visual shout-out to the first black fraternity in America, Alpha Phi Alpha, whose colors are black and gold. (The other major color palette is a deep pink, perhaps a nod to Alpha Kappa Alpha or just a color that looks great against brown skin.)

Drumlines, marching bands, pledge lines, beats-driven step sequences are the film’s vitality, the variety of body-types powering through Beyoncé’s demanding choreography, every beautiful slim, chunky and funky aspect of black culture is in that concert, with purpose, on purpose.

“I wanted every person that has ever been dismissed because of the way they look to feel like they were on that stage, killin’ them — killin’ them!” she said.

And there are the meanings within the alternate meanings. Beyoncé, in her narration, explains that she had long desired to attend an HBCU, but “my college was Destiny’s Child. My college was traveling around the world, and life was my teacher.”

But she’s also raw and real about the health complications involved in giving birth to her twins Sir and Rumi, and the punishing restrictions she put on herself to physically recover after her babies were born.

It becomes a work that challenges the viewer to take pride in their ability and what drives whatever she chooses to create — in her words, to be proud of not only the show but the process.

In the coming days, I am guessing “Homecoming” will be all that some people will be talking about; in the coming weeks broad swaths of the public will be divided between those of us who have seen it and those who have yet to see it.

“As a black woman, I used to feel like the world wanted me to stay in my little box. And black women often feel underestimated,” she says in voiceover.

At another point, she stands in awe of her dancers and the audacity of their passion and movement ability. It’s just so much damn swag, she says.  “It’s gorgeous.” She could have been talking about “Homecoming” itself. And this feeling makes the viewer a satisfied participant in the art of history.