Kissing in my classroom: The utterly inappropriate demonstration I failed to stop

My 16-year-old students knew I was researching a book on kissing. They took it as a challenge, apparently 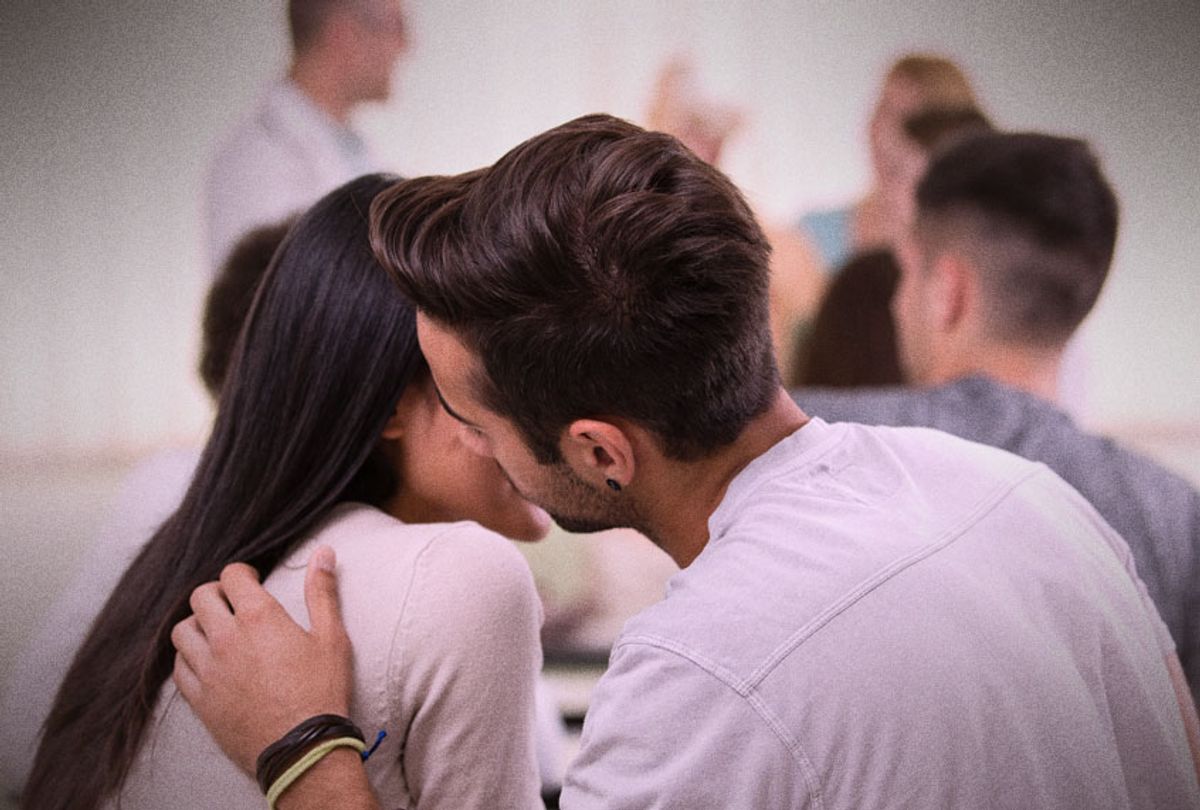 Excerpted from "Kissing USA: The Story behind the Story of the Legendary Kissing Show" by William Cane, published by Cleis Press. Reprinted by permission of Cleis Press.

In 1989 when I announced that I was researching a book about kissing, my students appeared mildly amused. I gave them extra credit if they completed my questionnaire because the survey contained 208 questions and amounted to a significant writing exercise. At the same time, I published the questions in Book News, an academic journal, which netted me some good responses from people who could write a coherent paragraph, something many of my students found too challenging. Meanwhile, I collected about twenty-five surveys from my summer class, and to be fair they did have some helpful responses.

Each week I also gave them a pen-and-paper vocabulary quiz, and while the test was being administered, I sat in front monitoring the class. Now, one thing that always set this class apart from my regular fall and spring classes was that the students were younger: they were sixteen-year-olds who had completed their third year of high school with a B-plus average. But the fact that they were young and that the class was offered in the summer tended to encourage them to act casually and joke around with me more. I still recall vividly how one particular girl from Puerto Rico, Lilliana, treated the class like a game instead of an academic endeavor. Ritchie, one of the Boston boys, quickly became her constant companion, and, bless his heart, the fellow always had a smile on his face.

Before the vocabulary test was finished Lilliana approached my desk, test in hand. I thought she was going to turn it in early, but that wasn’t what she had in mind.

“Professor, did you hear about lip-o-suction?”

She had spoken in a subdued voice, but because everybody was taking a test, the room was quiet and her comment carried all the way to the back. A few people started giggling.

Now, years later, reflecting back on what happened, I know that I should have asked her to return to her seat. But back then I wasn’t thinking completely rationally. I had such blind enthusiasm for my book project that I threw all caution to the wind and let her continue.

She plunked her test facedown on my desk and stood in front of me, pointing at a crude illustration drawn on the back of the page. It depicted a boy and girl kissing, a close-up of their mouths and lips.

Yes, I could clearly see that she had drawn the kiss as described.

“Then they reverse,” she added. “The boy kisses the lower lip, the girl kisses the upper lip.”

Now the class was in chaos. No one was paying attention to the test. Everyone was looking at Lilliana and laughing at her description. Nothing like this had ever happened in my class before, but it was going to get even worse.

“Me and Ritchie can demonstrate it for you.”

I couldn’t believe what I had just heard. That’s why I didn’t react fast enough to stop what happened next.

Lilliana turned and beckoned to Ritchie. He was a sheepish boy with tousled blond locks who resembled Steve McQueen. He seemed to be hypnotized by her.

Responding immediately to her request, but without any sign of haste, he ambled up to the front of the room and smiled. In one swift motion, the girl embraced Ritchie and turned him to face her. Now they were standing profile position in front of my desk so that the entire class could see the action of their lips. Friends, at that moment I was learning exactly how to stage the kissing demonstrations in my kissing show — which was still two years away — and they were doing it all without rehearsal or direction.

When I think back about the way I simply stood watching them, I realize how crazily I acted — or failed to act. As the teacher I had an obligation to keep people focused and on track. But I didn’t. I felt just as amused by this romantic demonstration as my class, and I made no move to put a stop to it.

In the middle of this chaotic scene, the rear door banged open and in marched Bernard Klaus, the sociology instructor. He was about fifty and was wearing horn-rimmed spectacles and a shirt and tie. No jacket. His skin had the consistency of a soggy pancake, and when he saw the spectacle unfolding in front of the room, his face turned vivid pink. Right then and there I knew I was a dead man.