Peter Buck has no complaints: On his new Filthy Friends album, R.E.M. reissues and more

Salon talks to the prolific musician whose post-R.E.M. creative life shows no signs of slowing down 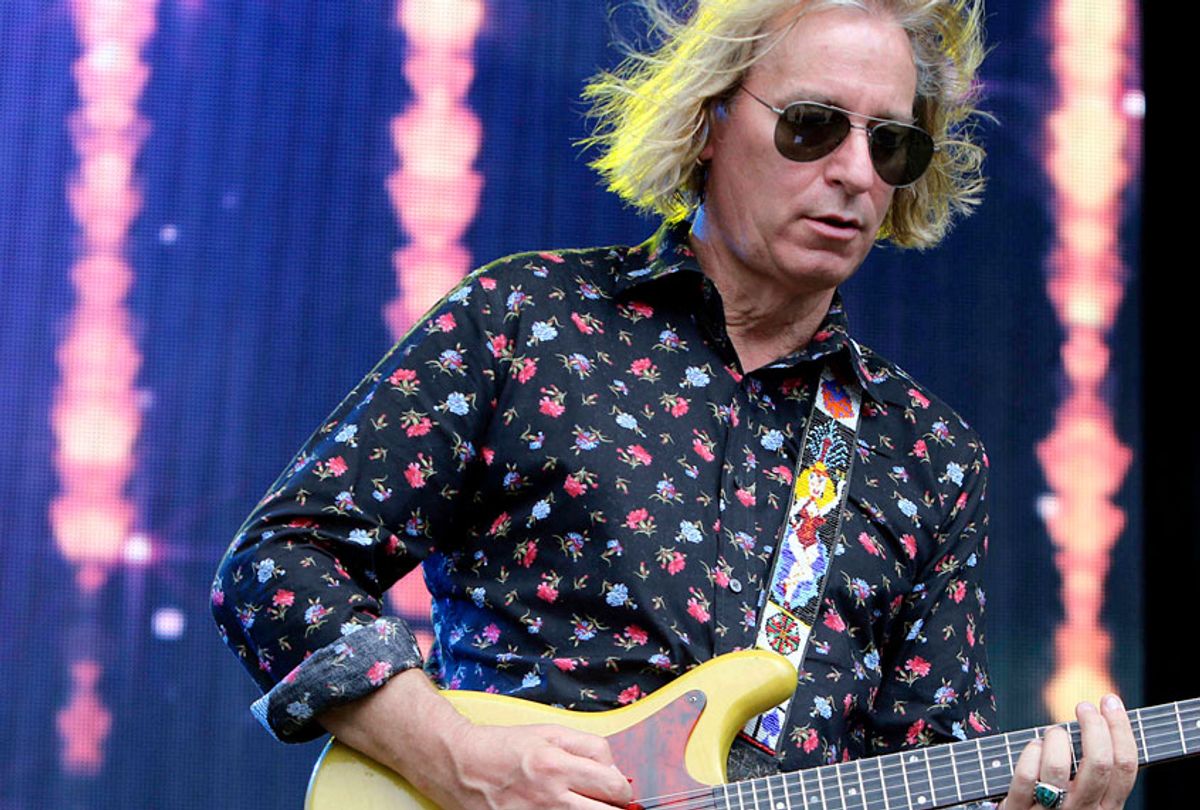 People frequently call Guided By Voices braintrust Robert Pollard the most prolific man in rock 'n' roll. However, Peter Buck continues to give Dayton's favorite son a run for his money: When Salon catches the former R.E.M. guitarist on a recent afternoon, he's hanging out looking at the ocean—earned relaxation, since the musician says he's effectively finished two albums in the last two weeks.

One of these new projects is "Emerald Valley," the forthcoming second LP from Filthy Friends, his band with Sleater-Kinney's Corin Tucker. Although the album (out on May 3 via Kill Rock Stars) reflects a slight lineup change—Buck's long-time bandmate Linda Pitmon is now the group's official drummer, since original drummer Bill Rieflin is busy with King Crimson—it's another satisfying, urgent rock 'n' roll record informed by decades of disparate musical experiences and influences.

As with the first Filthy Friends album, "Invitation," "Emerald Valley" is the product of weekly writing sessions between Buck and Tucker—and the music is a wholly separate entity from Sleater-Kinney and R.E.M., with many moods. Some moments are aggressive: The biting "November Man" boasts buzzsawing guitars, while "Last Chance County" hews toward throttling punk. In contrast, "Angels" is a poignant, twisting-kite '70s ballad. Other songs, however, split the difference: "Only Lovers Are Broken" is warm, Hüsker Dü-esque jangle-punk, while shivering, proud guitar drone buoys "Hey Lacey."

From a sonic standpoint, there's a musical and emotional through-line that brings cohesion. On some level, that's because "Emerald Valley" was recorded in a ten-day burst last August. This embodies how Buck likes to work: quickly. "If you have good players and you know what you're doing and you have a feel for it—it's just not that hard," he says. "Getting it out quickly, it's more fun; it's easier. I can't tell any appreciable difference between the ones that take three months and the ones that take ten days."

However, "Emerald Valley" is more deliberate than "Invitation," which he and Tucker wrote (and then recorded) when Buck was immersed in making his initial post-R.E.M. solo records under his own name. "That whole record ['Invitation'] was basically recorded with my downtime from my records," he recalls. "I wanted my records to sound like if it was a garage band in 1965. That was the setup we used to record all of those. It wasn't considered to be an album until we finished it.

"This time we had specific goals we wanted to reach. I think we've each learned each other's comfort zones. Corin has a really wider comfort zone than I would have imagined having not known her. We probably wrote 40 songs and had a whole bunch of stuff that really felt right."

Buck also recruited another frequent collaborator, Joseph Arthur, to see what he could add to the Filthy Friends sound. The resulting song he delved into, "One Flew East," is moody and subdued, and features insistent guitar curlicues and subdued piano that enhances the pointed lyrical commentary about a place where "rents sky high, vacancy low."

"We actually recorded just Corin playing to a drum machine, and Joe sent us back this track that was like a thousand guitars and basses and drums," Buck says. "But the whole kind of sonic atmosphere of that song, if it had been actually performed totally live, would've been really different. It probably would have been closer to what we do normally."

Despite the sonic progressions, Buck notes "Emerald Valley" was started "way before" the first Filthy Friends album even came out—as evidenced by the fact that the band previewed multiple new songs during initial rounds of touring in 2017. However, the album is lyrically quite thematically cohesive, which he says is a reflection of Tucker's vision for the how the album should unfold.

"Generally, when we finish a record, I'm the more the guy that likes to sequence it; I play around with it. But was Corin was setting a sequence, and I went, 'Yeah, that's right.' She was sequencing lyrically, keeping in mind what the music was about. Thematically, she wanted things to flow through. I think I made one change. It's her kind of picture of where she wanted the record to be. It is thematically connected."

Lyrically, it's a record steeped in anxiety, sadness and anger—as well as frustration at the way things are. Buck for one sees concrete sources for the "Emerald Valley" lyrical messaging. "Corin is looking at specific things, especially in the Pacific Northwest and what's going on with deforestation, and the way we treat our migrant workers," he says. "It all ties together."

The album's themes revolve around concern for the environment—or, rather, on "Pipeline" and "The Elliott," how we're not concerned about the environment and natural resources—and how easy it is to fall behind due to power or financial imbalances. At times, as on "November Man," the sentiment can be angry: "Winter comes for everyone/Will yours be bitter? Will yours be cold?" However, "Angels" is a mournful, powerful condemnation of children separated from parents while seeking asylum at the U.S. border, and the title track wonders, "The soil is fertile and the valley green/But who works the fields and picks the food we eat?/Who wins the bounty? Who is forced to leave, forced to leave?"

Filthy Friends is touring for most of May in the U.S., U.K. and Europe. However, every member of the band has a full, separate musical calendar. Scott McCaughey is doing shows with the Minus 5, which has just released a new studio LP, "Stroke Manor," and is booking a solo living room tour in early July. Tucker is gearing up to release a new, St. Vincent-produced Sleater-Kinney album at some point soon. ("I'm not supposed to say anything about it—but it's pretty great," Buck says.) And, as usual, Buck has multiple irons in the fire.

He's fresh off tracking sessions for the second album from Arthur Buck, his collaborative project with Joseph Arthur that emerged from a spontaneous fall 2017 writing session in Todos Santos, Mexico. Record number two poised to be more of a band record; Buck says he, Arthur and McCaughey returned to Mexico and wrote the songs, and then the trio tracked music in Portland with the Arthur Buck touring band, which also includes Pitmon and keyboardist Gregg Foreman.

Buck also recorded an album with "an acquaintance that I've actually never personally met in England" whom he declines to name, since he's not sure how much he can talk about the project. "We're pretty much done with this weird, end-of-the-world…I can't describe it. It's about collapse, the whole thing." And that's not all, Buck adds: "Steve Wynn and I are talking about getting together and making a record. We should've done that a couple years ago, but it just ever really happened."

R.E.M. is also having a rather busy year for a band that split up in 2011. June 14 brings a vinyl reissue of the greatest hits album "In Time: The Best of R.E.M. 1988–2003," while a deluxe 25th anniversary of 1994's "Monster" is looming later in the year. The most recent Record Store Day also saw a vinyl pressing of a widely bootlegged 1991 show at the Borderline in London, cheekily dubbed "Bingo Hand Job" after the fake name R.E.M. performed under that night. "The record's kind of fun," Buck says of the latter. "It's totally impromptu. We had never played any of these songs acoustic. I don't think Bill had ever played bongos. We just kind of did it."

But, as always, Buck's focus is turned toward forward motion and the current record at hand, which at the moment is the new Filthy Friends. When asked if there's anything else in particular he wants people to know about "Emerald Valley," he pauses and thinks for a moment, and says, "That it's out there. …It's a record I'm proud of; I want people to hear it.

"But then again—I was reading about Charles Mingus. I was playing some Mingus records yesterday. [The Mingus LPs] 'Ah Um' and 'Blues & Roots'—one of them has sold 1200 copies and one has sold 1800 copies. And that's Charles Mingus. He was playing in the real dumps and getting ripped off by promoters. And you think, 'Well, if Mingus can do it, then what would we lose if a record sold to 10,000, and [we] play for 400 people who are into it?' I have no complaints on that score."