“A Taste of Sky”: A post-food documentary about one man's vision and new purpose for fine dining 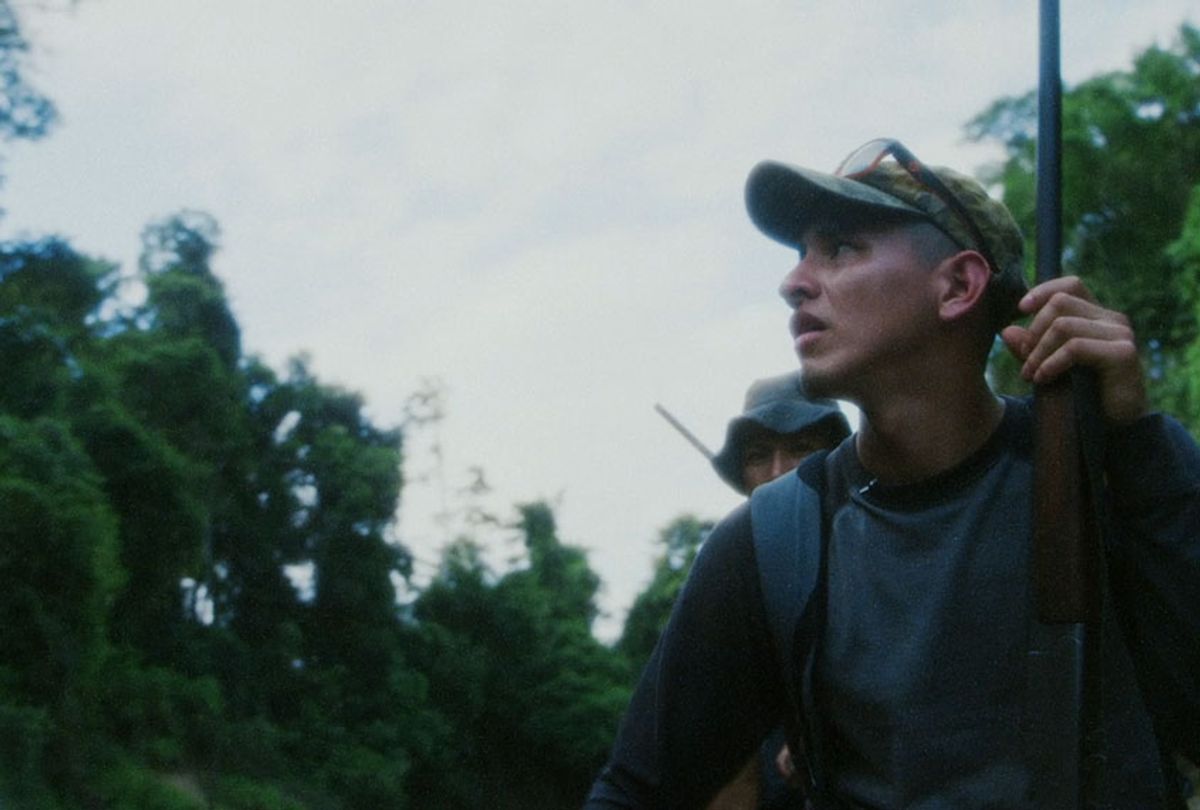 “A Taste of Sky,” director Michael Lei’s inspiring documentary, screening at the Tribeca Film Festival, chronicles the impact gastronomy has on two underprivileged Bolivians, Kenzo and Maria Claudia, in La Paz. They work at Gustu, a passion project restaurant and cooking school helmed by Claus Meyer, co-founder of Noma.

The film is less about the ingredients for the dishes — which include poached crocodile in hibiscus sauce —and more about hoping to change the food culture of a country (It worked; Gustu has been named one of the Top 50 restaurants in Latin America in 2014 and 2015). Moreover, Meyer’s schools and programs have graduated hundreds of students who now work in or run numerous restaurants in La Paz.

Lei’s film follows its two Bolivian subjects and also allows Meyer to talk with his daughter about his family, life, and career. Lei and Meyer chatted with Salon during the festival about their fine new film.

What comes across most in this film is the feeling of possibility food gives you. “We can change the world through food,” is one savory line in the film. But it is really about Claus sharing his knowledge with others, and helping his students, Kenzo and Maria Claudia, discover the same excitement he has towards gastronomy. Can you discuss that theme and why it is the throughline of your film?

Lei: What attracted me to this project is how this man who achieved so much in an affluent country and earned Michelin stars and can be seen as elitist but used [his success] as a platform and took it to a country that didn’t have fine dining. He brought it to lower income people where a meal that can cost $800 (with wine pairing) is unattainable for his students. He gave them a sense of pride in their own cuisine and a sense of hope through their own practices and culture and history of gastronomy. Using their food and their history and showing them that their food is just as good as the food in France or Italy or other meccas of gastronomy.

Meyer: I don’t know what to say to add to the film. If you have two hands and eyes and fresh ingredients specific to a place and somewhere to cook, then nothing prevents you from being a world-class destination except a perception of what you can do. You can launch an activity or a stream of actions in this field that can showcase to the whole community and nation and create awareness, and people can take a plane and check it out for themselves. But that journey is also about believing in their own future, believing in progress, and dreaming big and seeing it as important for people to create change in their community. That with hope and opportunity in the field of cooking it is possible to instill in a place without an academic career and it will be with them for the rest of their lives.

Lei: Piggybacking on that, a decade ago no one was talking about Peruvian cuisine and then Gastón Acurio exploded on the food scene and Lima is now a premiere food destination. Peruvian children have a food model. When a minority does it, it’s not unattainable. I feel this film will be seen, and a young Bolivian can look at it and say, “I can be like Kenzo!”

“A Taste of Sky” is about sparking the Bolivian food movement — showing how to cook with locally sourced, Amazonian products. But there is also a discussion in the film about an outsider, a European coming to Latin America, igniting that. What are your thoughts about that?

Lei: To be honest, coming in initially, as I started to think there could be a film here, there was a heavy sense of skepticism. I presented the story to organizations, like ITVS, Sundance and Tribeca, and the conversation with people in these positions was this “colonialist” aspect and “Are you going to reflect that?” I became very conscious of that every step of the way, but Claus and his team approached it from an organic position. It wasn’t imposing a will but providing a catalyst to help people out. The students bring the ingredients in and teach their traditions. Claus was providing a platform for that to happen.

Meyer: I think Michael said it well. There is a certain risk involved you come across as arrogant and pretentious and that they [the students] are idiots who wouldn’t be anything without you. We thought we could be of help and service. That’s what life’s about — maximizing your joy and pleasure. Any marginalized population needs assistance so I can’t accept seeing that providing this support or resources to a struggling community can be a crime. That’s social bullshit.

Lei: There is a frustrating moment where people would address it. Would you rather they had not gone? Look at what happen to Kenzo! Those opportunities would never have occurred without the push that was provided. It’s similar to a mentor or parent or a coach who pushes. They are not just throwing money and not giving anyone tangible skills.

Claus, you talk eloquently about your experience working in France and learning about food and appreciating what it can do. What was a Eureka! moment in your life — in France, in Denmark, or in La Paz?

Meyer: In Denmark, it was when we had all the greatest chefs together for an 18-hour workshop and the outcome was the Nordic Kitchen Manifesto at the symposium in 2004. We spent hours discussing what could be the most beautiful ethos to achieve or struggle together and share with our world all the years after. Those 48 hours, I could see and feel the quality of the narrative and that was an important moment in my life and in the life of Denmark and Scandinavia. It was the beginning of something very big. I could feel it, and it turned out to be so.

In Bolivia, I had a moment when I participated in first graduation and the warmth and vibrant energy in the room and seeing the eyes of the student and their families and feeling something that was a massive undertaking. We also started twelve schools [in underprivileged areas], and to visit those and be exposed to extreme poverty and feel the gratitude.

Michael, I venture to call “A Taste of Sky” the first “post-food” documentary I’ve seen in that there is far less emphasis on what is being served here and more on how food helps folks find meaning in their lives. Can you talk about this approach to making a film about a restaurant?

Lei: Yeah. We started the film right after “Jiro Dreams of Sushi” and before “Chefs Table.” If you are making something in this genre, you have to add something to the conversation other than making and extended “Chef’s Table” episode. This story inherently seemed like more than “Chef’s Table.” Those shows are a profile of a fine dining chef. It’s curated, not following something in real time. There was something more soulful in the parallels between Claus’ life and the students’. It’s a trojan horse film — it is about what is our legacy? and how do we spend our time and our family life? Maybe in 10 years, Kenzo or Maria Claudia will provide a program of their own, and how that can keep going was the launching point to discover. It’s a film that uses a genre to deepen and explore greater things.

Before we continue, down that path I am curious to know what that fruit was that Kenzo tasted that was intense and refreshing. And how was the palmito Kenzo is seen whittling used?

Lei: The fruit was maracuyá — a passionfruit. The palmito is the heart of palm tree — the inside core of a particular tree that is pickled or brined. At Gustu, they peeled the palmito piece by piece to become these soft, luscious strands, and cooked them with brown butter and dried llama meat like jerky and a little salt and an egg. It was a deconstructed carbonara. It was a signature dish, but it took 10 hours to have a chef peel the palmito off with tweezers, so they took it off the menu because it took so long to prepare.

Claus, can you talk about being interviewed by your daughter?

Meyer: It was a special moment for me. I never had a serious conversation with my daughter in my life. The cameras reinforced the moment.

I want to stress that I’ve been extremely absent with the preparation or structure of the film. I stayed out of the planning. It would be strange to be the author of a portrait and influence or manipulate the story.

Lei: Those scenes were filmed here in New York when Claus was doing his project at Grand Central. We had an hour and a half to shoot it. Once we did initial interviews with the film’s other subjects, I thought they were stilted and unnatural. I wanted the film to have more of a cinematic vibe. After banging my head about it, I realized this is a film about family and relationships, so, what about putting the subjects in dialog with their families? Kenzo is seen with his father. But with Claus and his background, his wife knows everything about him, and so we thought, why not ask one of his daughters? I went to the oldest, but she thought Augusta, the youngest should do it. I thought: Have an 11-year-old do a centerpiece interview? I was extremely worried. She was wise beyond her years and it is very clear it was the right decision. I credit his daughters for making that a possibility. I had to take her out for ice cream after.

Where did you go?!

We went to a gelato place in Chelsea market.

The film shows the arc of people finding a skill and making a career, sometimes in a non-traditional or unexpected way. What observations do you have about home and family, kitchen and career?

Lei: It exists in every profession. My family asks what does a filmmaker do? Maria Claudia and Kenzo are so far from their families. Kenzo’s family hasn’t been to La Paz. It is a different world for them. They are not sure what their son is doing. They know he is cooking. It’s like my family back in China — I have only my immediate family here — they have a traditional way of life. To explain filmmaking is like describing a sunset to someone who hasn’t seen one. Maria Claudia took her older sister to eat at her restaurant. She appreciated it, but it doesn’t impact their families back at home. It might resonate later how much it truly changed their lives.

Meyer: It’s a big topic. You discover it across your life — you are good at something and enjoy what you do. I was told to follow my heart and I tried to follow my heart, doing what I loved to do and what I was good at. Cooking had to be part of it. Cooking is about nurturing and caring and feeding someone, and the ethos of the film is about providing a meal to another person. That’s an amazing vehicle and component of life.