In a time of adversity, the bone-deep appeal of bone broth moves through mother to daughter 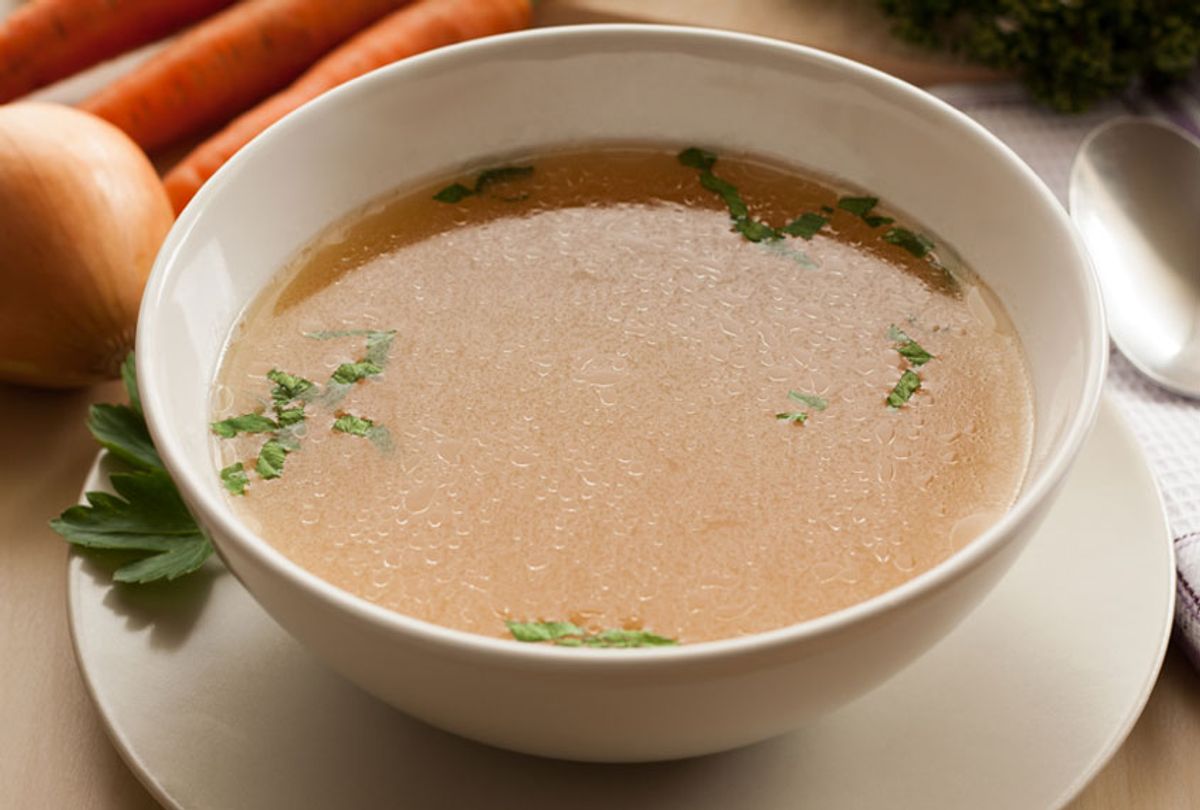 "War! What is it good for? Absolutely nothing!"

My mother, who doesn't have a musical bone in her body, had tuned into the iconic Edwin Starr anti-war song wafting from my sister's kitchen while we were enjoying a cup of tea in the garden. The California sun was a tad too bright for both my Cockney-born mother and me, more vampire than human when it comes to light.

Shielding my eyes against the glare, I looked at her. Here we go again, I thought. Mother always has an opinion and usually, it is contrarian, often tiresome. She had been a girl of twelve living in the East End of London when WWII broke out. When the Blitz began the nearby docks, naturally, were a favorite target of the German Luftwaffe. My mother and her family were bombed out of two homes. The strain of the constant bombardment was so great on her father that he suffered a complete mental breakdown and ended up "being sectioned," as the Brits call being committed, he died in confinement thinking he was the Duke of Wellington. That said, over the years, my mother has made it plain that she thought the war was rather fun. There were, of course, the "Yanks" which as she ripened into a young woman were far and away the best thing the war had on offer.

Besides jazz, chocolates, and stockings, the onslaught of American boys brought subtler changes. For one, the soldiers thought my mother's cockney accent was just as swell as some well-bred girl from Sloan Square. As a result, the rigid class system, while not destroyed, was given a swift kick in the pants. Still, my sisters and I never entirely bought her story that the war was all hunky dory. Her voice rang too high, and the mere mention of fireworks had her quaking in her boots.

"Mummy, just because you got chockies from the GI's is no defense of war."

Putting down her tea, she gave me a dismissive wave. "Not the chockies, I was thinking of bones."

She nodded. "My mother, your Gran, she was sly. While everyone else was using their rations for scraps of bacon, she always asked for a bone, cow heel, ham hock, pork foot. I think her smarts came down through her blood. Her people, all of them, she claimed, survived the Irish famine."

I was about to object but bit my tongue. Even if only one of the vast network of our Irish ancestors bullied their way through the famine, that's reason enough for my Gran to boast.

"Into the pot, it would go, along with all the green water she had saved where it would simmer away for hours on end. Gran would reduce it down till it was a viscous liquid. For dinner, we'd dunk pieces of her bread in it. No butter, of course.  When the raids would start, the whole house shaking, plaster falling, dust everywhere, we'd be rushing down to the cellar while she'd be heading towards the kitchen to make sure the broth was covered.

Of course, I resented it terribly. I wanted clams casino and a steak the size of the plate, meals I'd seen Clark Gable and Betty Grable eat in the movies. But we didn't suffer chilblains or rickets, which many of the other children did. I put that down to Gran’s broth. Had there not been the war and all its deprivations there would have been no need for the bone broth."

"Funny," I said, pouring my mother more tea. "Bone broth is all the rage now. Butchers are scrambling to provide enough bones that were once probably just thrown away or ground up for bonemeal."

We both sat then, sipping our tea, lost in our private thoughts. I have my own long relationship with bones: forgoing the meat of a chop for a chance at the bone, ignoring the breast and thigh of a chicken in favor of wings and the carcass. And, of course, a bone broth always percolating on the stove, unbeknownst to me until that moment, an homage to my grandmother.

It was then that I remembered a dinner I had in Livingstone, Guatemala, which at the time was embroiled in a barbaric civil war. Livingstone, situated along the coast, was more ghost than tourist town. Most of the hotels and restaurants were shuttered and, even to my untrained eye, a heavy caul of menace hung about the place. Many of the women, most of whom had sons who had melted off into the mountains to join the rebels, had opened their homes for dinner to paying guests.

The repast was usually locally caught fish, which I'm allergic too, so I sated myself on rice and beans. But one evening I was a dinner guest at the home of a woman who had managed to scrounge up a chicken. She was inordinately proud as she served up the stewed pieces, handing me, the only woman in our group, the back of the bird with the neck still attached. I remember her, as I started to wrestle with the scrawny neck, giving me a complicated look which was equal parts shyness and complicity. "This," she seemed to say, "is what we women do to survive."

Whenever I eat chicken backs, I think of her eking out a living, holding it all together waiting for her sons' return.

Sitting in that California sun, my aged mother beside me, I felt the faint stirrings of an epiphany. But mother slammed down her teacup and broke my train of thought.

"It was bones!” she said, "that let me know my marriage to your father was over."

"Remember when he left for the first time? You were about seven. He was gone a whole year. Then one day he turned back up."

I nodded. It was a bit strange. Him not being there, and then, poof, he was back. There was no announcement at either end. But I was a child so just rolled with it.

"Everything seemed fine,” Mother continued. “or as fine as one could expect. Until I made a roast chicken. I was pregnant with your sister. By meal’s end, my plate was piled high with bones so one by one I picked them up, cracked them open and sucked out the marrow. Over the top of a drumstick, I noticed your father's look of disgust. 'Must you?' he said. I knew then that I didn't love him anymore.” Mother sat back, folded her arms, and turned her face to the sun. She looked beautiful, serene almost, not a look I normally associate with my battle-ax of a parent.

"Bones," I thought, grabbing the faint tendrils of my epiphany out of the bright sunny air, “are the cribbing of survival."