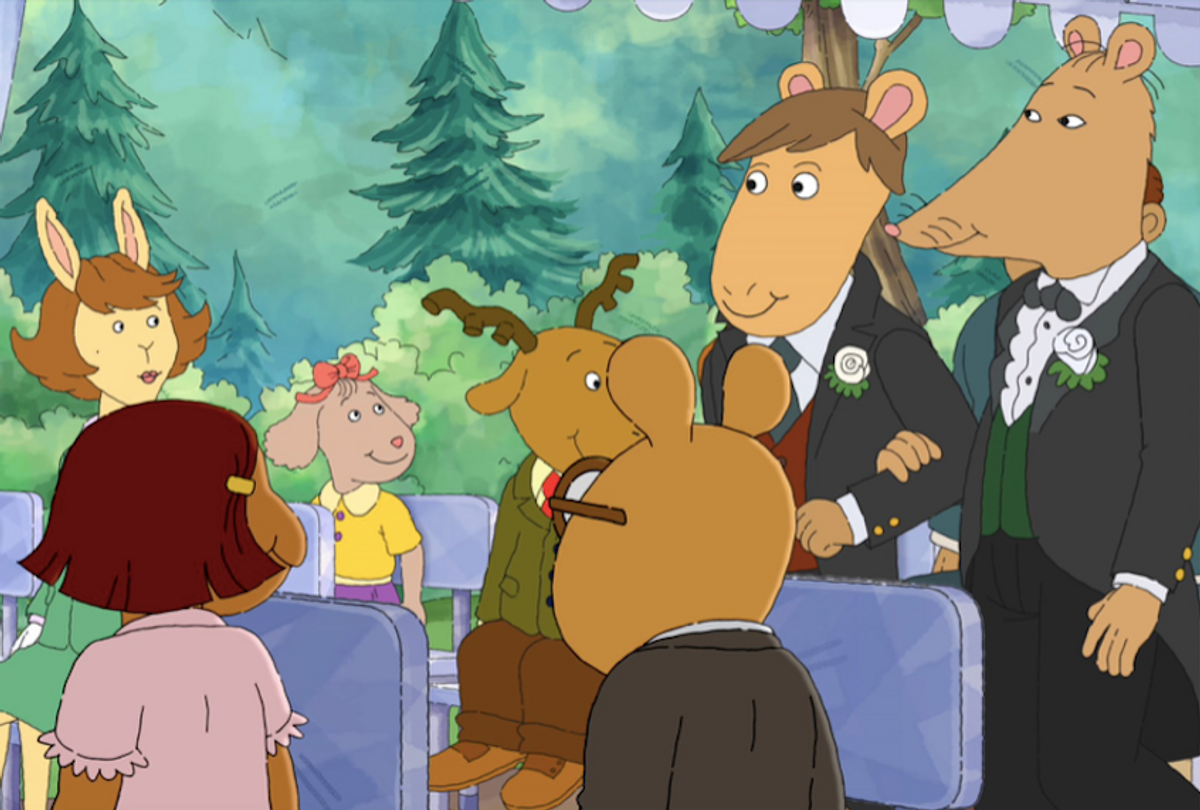 Abortion isn’t the only thing that’s being banned in the deep-red state of Alabama. The state’s public television network has barred an episode of the children’s show “Arthur” because it features a same-sex wedding.

“PBS Kids programs are designed to reflect the diversity of communities across the nation,” PBS official Maria Vera Whelan said in a statement to The New York Times. “We believe it is important to represent the wide array of adults in the lives of children who look to PBS Kids every day.”

“Parents have trusted Alabama Public Television for more than 50 years to provide children’s programs that entertain, educate and inspire,” Mckenzie told the outlet. “More importantly — although we strongly encourage parents to watch television with their children and talk about what they have learned afterwards — parents trust that their children can watch APT without their supervision. We also know that children who are younger than the ‘target’ audience for 'Arthur' also watch the program.”

The show’s creator, Marc Brown, told People that he was “very disappointed” with the station’s decision.

“I’m really proud of that episode. And I will defend it to anybody who wants to talk about it,” Brown told the outlet. “Why shouldn’t their teacher marry another man? We all know people who are gay, who are trans, and it’s something that is socially acceptable. Why is there this discomfort that it takes a leap into our national media? I don’t want children or people who are different to feel excluded. That’s not the kind of world we want to live in.”

APT previously pulled a 2005 episode of the “Arthur” spin-off “Postcards From Buster” because it featured a character who had two mothers. President George W. Bush’s education secretary, Margaret Spellings, publicly complained about the episode at the time, causing the Department of Education and PBS to pull funding for the series.

“Our feeling is that we basically have a trust with parents about our programming. This program doesn't fit into that,'' APT told AL.com in 2005.

Brown told People he is still frustrated about how the 2005 episode was handled.

“With 'Postcards From Buster,' we began that series after September 11, 2001 when we realized we didn’t really understand or know enough about one another,” he said. “The whole purpose of the show was to depict real families of all kinds — kids living with grandparents, aunts, uncles, etc. And here we had this family in Vermont with two moms, and the kids, when they pulled the episode, they were so upset.”

“I have never forgotten how difficult this was and how badly I felt for those children,” he added. “Nothing was wrong with them. And we had another chance with 'Arthur' to correct that all these years later.”

APT is not the only organization upset by the episode. OneMillionMoms, an arm of the fundamentalist Christian group American Family Association, launched a petition demanding PBS pull the episode.

The group claimed that the episode was “offensive” because it “would glorify the homosexual lifestyle.”

“Just because an issue may be legal or because some are choosing a lifestyle doesn’t make it morally correct,” the petition said. “PBS Kids should stick to entertaining and providing family-friendly programming, instead of pushing an agenda.”

But pro-LGBTQ groups like GLAAD, the Gay & Lesbian Alliance Against Defamation, say the episode is an important step in helping kids who do not see themselves represented in media.

"With LGBTQ visibility at an all-time high on television, including in the Kids and Family Programming genre, this attack to censor content is not only mean-spirited, it’s a losing battle,” GLAAD President Sarah Kate Ellis said in a statement. “LGBTQ parents and their children deserve to see themselves reflected in media and if leadership of this public broadcasting station cannot serve the interests of the entire public, it's time to find someone who can."

The episode of "Arthur" in question can be seen for free on the PBS website.