50 years ago, I graduated from West Point and covered the Stonewall uprising for the Village Voice

It’s not as incongruous as it seems considering our history since then. We've come too far to get dragged back 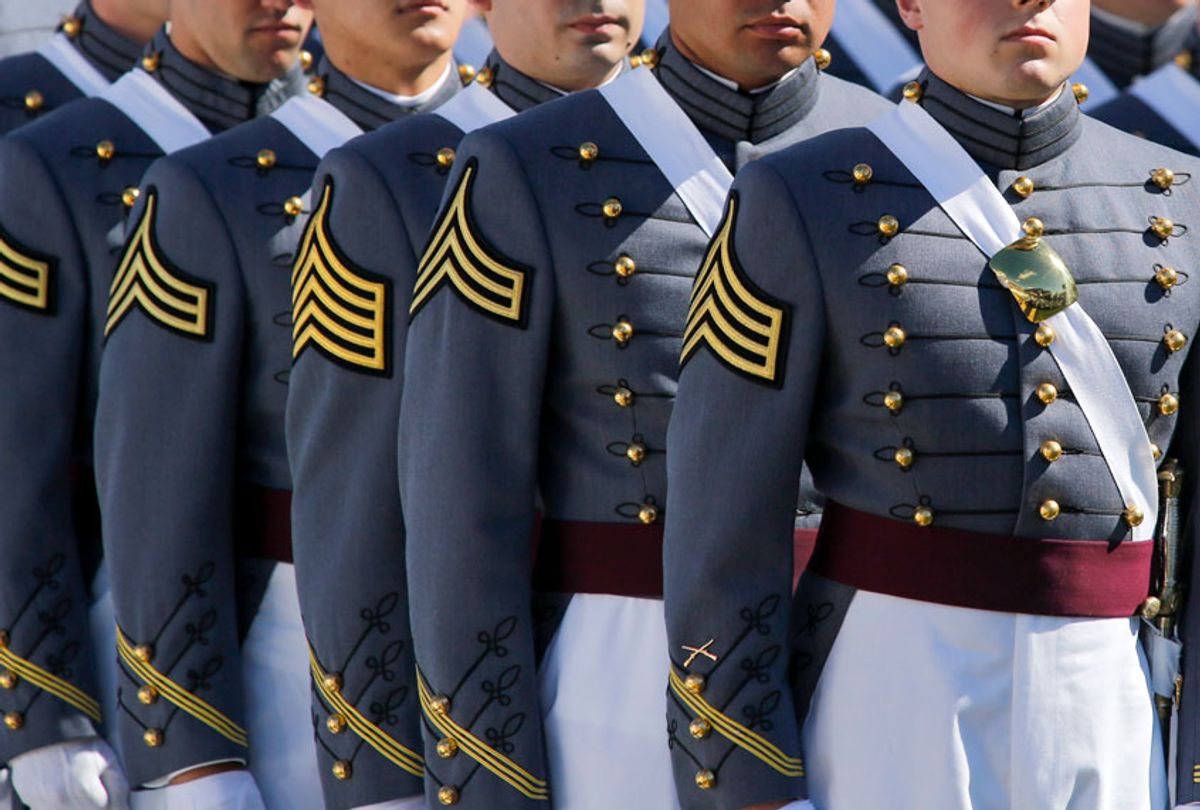 Fifty years ago, I walked across the Plain, the parade field at West Point, executed an about-face and stood at attention alongside the rest of the class of 1969 while the Corps of Cadets passed in review at our graduation parade.

This week, I once again stood at attention on the Plain alongside my classmates as the Corps of Cadets passed in review honoring our class (and several others) at the Alumni Parade. It was our 50th reunion.

It occurred to me as I stood out there in the sun on another brisk May morning at West Point that I was a junior in 1968 when I marched in the Alumni Parade for my maternal grandfather's class at their 50th reunion. His name was Bartley M. Harloe. He had a distinguished career in the Army Corps of Engineers. He was the head of the Army engineers for the Works Project Administration (WPA) during the Depression and was in charge of building National Airport and most of the navigational locks on the Mississippi River, among other projects.

One hundred and one years have passed since he graduated in 1918. West Point, founded by Thomas Jefferson in 1802, is one of the most hide-bound institutions in this country, if not the entire world. Little has changed about the place since my grandfather was a cadet. Many of the same barracks are still there, built in stone in a style they call "military gothic," along with the Cadet Chapel, which towers above the place like a Medieval castle. The so-called "Thayer System," established by the Superintendent Sylvanus Thayer in the early 19th Century, is still the form of academic instruction at the Academy. There have been various changes in the cadet uniform over the years, but the Dress Gray uniform with its gray woolen coat and stiff black collar and gray trousers with black stripes down the sides is pretty much unchanged. West Point is still a military academy and graduates classes of Second Lieutenants into the Army every year.

But as we took our places on the Plain for the parade, I was reminded that there have been several major changes at the Academy since my grandfather's day (or mine for that matter).

The first, of course, were the women who commanded cadet companions,  battalions and regiments as they marched past. I supported the admission of women into West Point when it happened way back in the '70s, wrote numerous articles about the benefits of gender integration of the military and appeared many times on all the networks, including Fox News, debating the issue.

Then right out there at the parade, I ran into my classmate Stewart Bornhoft and his husband Stephen McNabb, a former Naval aviator. They have been together for more than 22 years and were married 11 years ago in 2008 in San Diego. Stewart played an important role in the struggle to overturn the disastrous "Don't Ask, Don't Tell" (DADT) policy, which was finally overturned in 2010. For nearly 200 years patriotic gay Americans were banned from serving openly in the military. No more.

It happens that I played a role in overturning DADT, too. I wrote op-ed articles in favor of the right of gay people to serve openly in the military and appeared on television and radio programs and lobbied congressmen and senators with the Human Rights Campaign Fund.

And as incongruous as it sounds, as a newly-minted Second Lieutenant, less than four weeks after I stood on the Plain for my graduation parade at West Point, I stumbled into the Stonewall riot in New York City and ended up writing the cover story about the three-night uprising for the Village Voice.

The NYPD busted the Stonewall, a gay bar on Christopher Street, on the night of June 27, 1969. I had two months of graduation leave before I reported for my first duty station at Fort Benning, Georgia in August, and had been living in a loft I sublet from an artist friend on Broome Street. That night, I was on my way to the Lion's Head, a writers' bar right two doors down from the Stonewall when I turned the corner at Waverly and Christopher and walked straight into the bust of the Stonewall.

Back then, most gay men and lesbians were deep in the closet, so when the NYPD busted a gay bar and arrested the patrons, they came out of the bar covering their faces to hide their identities, afraid if they were photographed or otherwise recognized, they might lose their jobs, or their families might discover they were gay. But not that night at the Stonewall. The crowd there was young — many were underage — and when they came out of the bar in cuffs, they posed for the crowd and waved to their friends and taunted the cops who were arresting them.

A crowd of about a hundred had gathered across Christopher Street on the sidewalk and in Sheridan Square Park, and they joined in, yelling at the cops, calling them "pigs" and cheering the Stonewall regulars as they came out the door posing and waving to the crowd. The cops got madder and madder and began prodding the arrestees with their nightsticks and roughing them up trying to get them in the paddy wagon. The crowd yelled at the cops and began throwing pennies, calling them "dirty coppers." When the cops tried to break up the crowd, they began throwing small stones and advancing across the street.

The cop in charge of the bust dismissed the paddy wagon and retreated with the rest of the cops into the Stonewall and called for reinforcements. One guy tried to grab the garbage can I was standing on, and when I wouldn't get off it — I was standing up there for a better view — he picked up another can and threw it through the front window of the Stonewall. Paving stones flew. Somebody picked up some trash and shoved it through the broken window and lit it on fire. It was a wild scene, a real riot. I knew it was a story and was taking notes, but I didn't yet understand of the importance of what I was witnessing as a whole bunch of gay people in New York stood up and said forcefully, in very large numbers, "we're not taking this shit anymore."

The next day, someone spray-painted "Gay Power" on the front of the Stonewall, and a much larger crowd gathered on Saturday night. The cops called in the Tactical Patrol Force in helmets and shields carrying nightsticks and tear gas, and the riot spread onto 7th Avenue and all around Sheridan Square. AWhen it was all over on Sunday night, I was walking over toward the East Village with Allen Ginsberg and listened as he identified the beginnings of a revolution. "Defend the fairies!" he called out joyfully to me as I turned south on Lafayette Street to walk down to my loft on Broome Street. "He (Ginsberg) enjoyed the prospect of 'gay power' and is probably working on a manifesto for the movement right now," I wrote later that night, in the last lines of the Voice piece. "Watch out. The liberation is under way."

I had no idea at the time I had been witness to the Rosa Parks moment of the gay rights movement. Nor did I know that those three nights would lead, over the next several decades, to the right of gay people to serve openly in the military, and to their right to marry, both rights earned in hard-fought battles against an entrenched conservative political and religious movement in this country.

Part of that battle was fought at West Point. My classmate Stewart Bornhoft was among the founders of Knights Out, an organization of anonymous active duty West Point graduates and alumni which fought against DADT from the beginning. I was the first straight member of Knights Out and volunteered with the Human Rights Campaign and went to Capitol Hill to lobby for the rights of gay people in the military.

Fifty Years seems like a long time until you sit back and consider that almost 200 years of oppression preceded the rights that gay and lesbian soldiers have today. Trump's incredibly stupid and illegal policy banning transgender Americans from serving openly in the gender they identify as is being fought just as DADT was fought against. The policy won't stand. Hopefully a few military commanders and retired generals will remind the country how odious Trump's plans are to pardon convicted war criminals. He's obviously doing it to appeal to his base, but he's going to end up alienating our allies and putting in danger troops who might be captured by enemies in current and future wars. If we needed a reminder that Trump was a chickenshit draft dodger and still acts like one, there it is.

When gay graduates can return to West Point for their reunions with their husbands or wives and be welcomed by the Academy and their classmates, you know things are changing in the United States of America. Trump and the Republican Party and the religious right were beaten on DADT, and they'll be consigned to the same fetid backwaters of history on transgender rights, too. Stonewall started it. Young people, young soldiers, young airmen and women and sailors and marines and civilians will finish it. Allen Ginsberg was right. Stonewall was a revolution. It's still a revolution, and we are winning.