"The Texas Chain Saw Massacre": A metaphor for Nixon-era mayhem 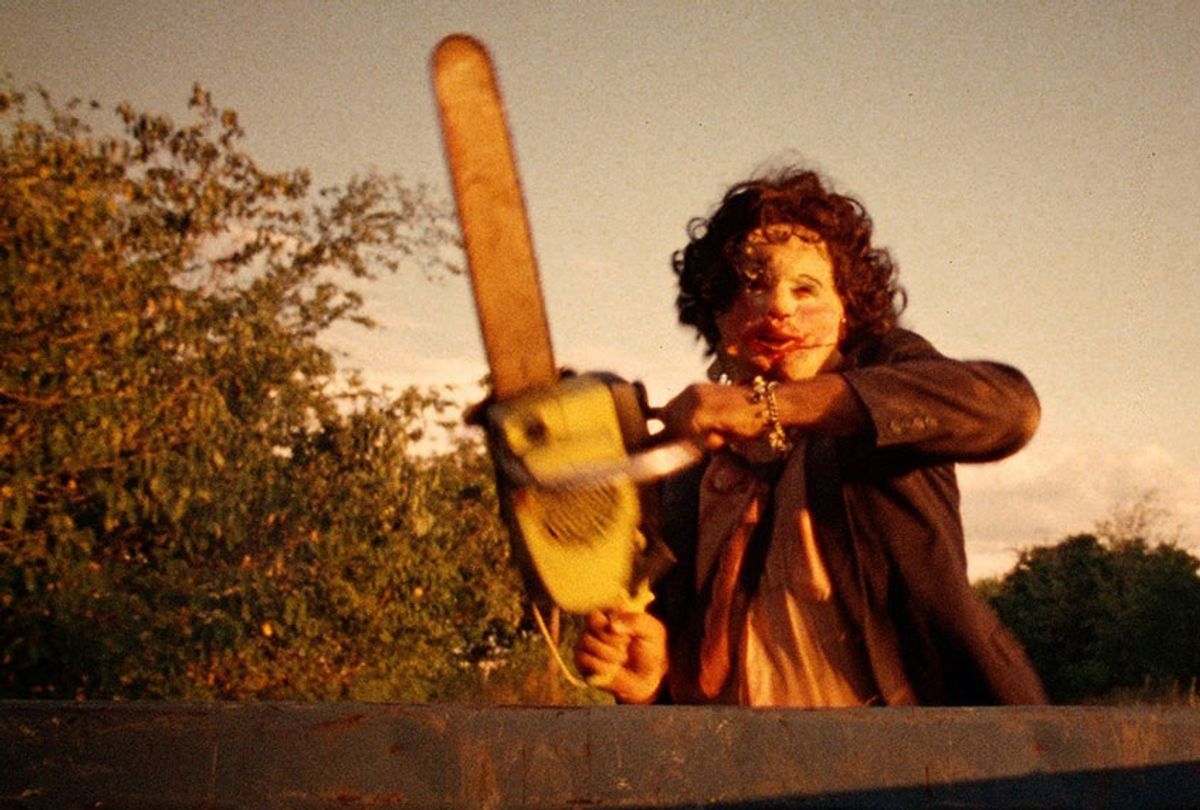 Excerpted with permission from "The Texas Chain Saw Massacre: The Film That Terrified a Rattled Nation" by Joseph Lanza. Copyright 2019 by Skyhorse Publishing, Inc.

One day in Austin, Texas, during a frantic Christmas shopping season in 1972, Tobe Hooper had an epiphany. He stood in a crowded hardware section of a Montgomery Ward, wary of the holiday spirit, and desperate for an exit. Noticing a bunch of chain saws in an upright display, he fantasized about slicing and dicing his way through the consumer swarm. He repressed his dream of a Yuletide bloodbath, but once he escaped the claustrophobic maw and settled back home, visions of chain saws whirred in his head, setting off a chain reaction of story ideas.

Hooper’s muse appeared at a wild time in modern U.S. history. In the early ’70s, before "Jaws," "Star Wars," "Saturday Night Fever," Jimmy Carter, and even the pet rock, America writhed in a pre-disco inferno. As he told Texas Monthly in 2004, “I went home, sat down, all the channels just tuned in, the zeitgeist blew through, and the whole damn story came to me in what seemed like about thirty seconds. The hitchhiker, the older brother at the gas station, the girl escaping twice, the dinner sequence, people out in the country out of gas.”

While Hooper plotted out his narrative, the holiday season of 1972 was already fraught with Hooper-ish gloom. Nixon won his re-election in a landslide the month before, but shadows of scandal stalked him when a grand jury indicted seven of the Watergate burglars months before. Bob Woodward and Carl Bernstein were already on a case that would metastasize, forcing many Americans to perceive their Commander-in-Chief as a mask with two faces: the leader and the liar, the potentate and the scoundrel. Like Hooper in the hardware department, the President grew impatient and sought a violent solution. This time he had an alibi. The North Vietnamese stalled about signing a peace accord, so he ordered the Christmas bombings over Hanoi and Haiphong, with dozens of U.S. airmen becoming casualties, captors, or among the missing. Also, during the dark December of 1972, the final manned Apollo moon-landing mission returned to Earth as a bittersweet swansong to the “space age.”

On December 8, United Flight 553 crashed into a residential area near Chicago’s Midway Airport, killing Dorothy Hunt, wife to the infamous Watergate player E. Howard Hunt. Mrs. Hunt (involved in OSS and later CIA activities since World War II) was allegedly carrying thousands in cash at the time. Some conspiracy theorists believe the crash was the result of sabotage, and that Mrs. Hunt might have also been aiding her husband in either blackmailing or exposing the president regarding his connections from Watergate and all the way back to the Bay of Pigs fiasco.

Then, on December 23, the otherwise miraculous discovery of 16 plane crash survivors in the Andes took a macabre twist when they credited their 72-day endurance to cannibalism. It seems that Hooper’s "Chain Saw" storyline was writing itself, drawing from events and moods in America and sometimes from around the globe. Occasions formed confluences with other occasions: social, political, and personal themes that would make "The Texas Chain Saw Massacre" more than just a movie.

With his collaborator Kim Henkel, Hooper planned a post-’60s version of Hansel and Gretel: lost but blindly optimistic young people wandering into strange places that waited to gobble them up. But instead of gingerbread houses or old-fashioned witches, they looked to grislier serial killers, people like Ed Gein—the Wisconsin ghoul who (though credited with only two official murders) dug up graves to make clothing and furniture from the corpses. Hitchcock had already invoked Gein in "Psycho" (with other films to follow), but Hooper and Henkel knew they had to compete with the standards already laid out by George Romero’s "Night of the Living Dead" and Wes Craven’s "The Last House on the Left."

In January of 1973, shortly after his second inauguration, Nixon announced on radio and television that he and Henry Kissinger devised a plan for “peace with honor” to end the Vietnam War. The speech was short, to the point, and shocking to many in the press who expected something direr. Despite cynicism from media talking heads, this proved to be Nixon’s final presidential power play, the last moment for the President to save face before a deluge of dirt started leaking from the Oval Office and onto newsprint.

Hooper and Henkel once planned a fairy-tale look with trolls creeping out from beneath bridges, but they instead got a readymade "Chain Saw" muse via Nixon’s political transgressions. A doctor that Hooper knew provided more ideas, specifically when he bragged about making a mask from a cadaver during his pre-med days. Like the ensuing events, the movie’s title also shifted. According to Robert Burns (who served as art director, casting director, and taxidermist of dead animals), an early title idea was “Saturn in Retrograde.” Then it was “Head Cheese” and “Stalking Leatherface” before condensing into “Leatherface.”

Later, a man named Warren Skaaren, who served as the Texas Film Commission’s first director, helped them broker a deal to finance the film with the help of another investor named Bill Parsley, who acted as Texas Tech University’s vice president of financial affairs and had enough pull with oilman R.B. McGowen. Together, they helped to raise the initial $60,000 to make the film. Parsley’s lawyer, another name that would appear in the movie credits, was Robert Kuhn, a buttoned-down type who got skittish when he saw Hooper and Henkel in his office, wondering (from what he judged as their dazed-hippie appearance) if they were up to the task of earning back the money.

Skaaren offered another vital contribution. A week prior to principal photography, he suggested they rename the film as "The Texas Chain Saw Massacre." Leatherface star Gunnar Hansen claimed to have hated it then but also admitted that its sensationalism alone got thousands of people to donate a slice of their mundane lives to experience what some critics would acclaim with such kudos as “unrelenting horror.”

Hooper and Henkel started collaborating on "Chain Saw" in January and February of 1973. That is when Hooper claimed to get additional inspiration from two albums. But here his memory seems to lapse. He told journalists (including the Austin Chronicle in 2000) that it might have been Elton John’s "Goodbye Yellow Brick Road" or Lou Reed’s "Berlin." Elton John’s album and song, however, hit the Billboard charts in October of 1973, the same month that Reed’s album debuted.

The more likely tune is a folk ditty that nourished the airwaves by the early months: Loudon Wainwright III’s Top 40 novelty “Dead Skunk.” It was the ideal metaphor that would, for Hooper, evolve into the visual and implied impact of a rotting armadillo, an Austin mascot, which lay in the middle of the steamy route as a group of five unwary youths crossed its path. The verbal word play between Wainwright’s use of “olfactory” and the story’s old slaughter factory might also have fermented in Hooper’s head.

From the first reeking shooting days in July of 1973 (during one of Texas’s hottest summers) and its post-production and reshoots starting in mid-August, to the maneuvers required to get it distributed and finally presented to a viewing public in October of the following year, the film and the circumstances leading up to its public presentation serve as a metaphor for the early ’70s mayhem. Many of these connections between art and life might not have been Hooper’s conscious intent all of the time, but in retrospect, the film casts an eerie reflection on what Jimmy Carter would later call America’s “crisis of confidence,” particularly for those of the working and middle classes who started to feel the sting of falling from their post-World War II ascension and seeing their American Dream disemboweled.

Today, "The Texas Chain Saw Massacre" is a work that nearly every age group knows about and whose power continues to reign over many daydreams and nightmares. In the many decades since it premiered to an alternately ecstatic, appalled, shocked, and nauseated crowd, it became part of the Museum of Modern Art’s permanent collection. It has earned Entertainment Weekly’s scariest film category (second only to "The Exorcist"). Slant magazine made it #1 in its Top 100 all-time Greatest Horror Movies. Texas can claim it as its most financially fruitful movie, garnering loads more than its relatively meager production funds, despite much of the loot never entering the creators’ pockets. But "The Texas Chain Saw Massacre" has grander historical importance: it’s a collection of stories within a story, conveyed through clues, suggestions, and uncanny connections that make its principal characters pawns in a larger game.

The solar flares, the desecrated graves, the harrowing radio announcements, the quirky weather, the mumbling drunk at the cemetery who claims to know more than everyone else, the dying cattle in the old factory where Leatherface’s family used to slaughter them with a quick plunk of the sledge, the blood-soaked shape that the hitchhiker leaves on the hippies’ van, and the voodoo trappings outside the Hardesty grandparents’ home—all offer signs that, far from being sappy supernatural lures, are more terrifying for being so mundane. "The Texas Chain Saw Massacre" is secular horror at its best.

Instead of regarding the film as simply a work with actors, directors, producers, budgets, and shooting schedules, readers should appreciate Hooper’s masterpiece as a wider visceral experience: a tale engorged with newsworthy analogies. Here is where seemingly disparate ideas and images briefly come together in a world teeming with menace and traversed by souls that have lost their way. “You could feel that things were on edge and had the potential for popping,” Mr. Hooper would say.

"The Texas Chain Saw Massacre" had all of the timely fixings: unprecedented gore, “evil” Southern rednecks, lost and searching youths, hippie chicks, allusions to the oil crisis and economic recessions, unprecedented fixations on death and disaster, and that other morbid interest that accelerated in the ’70s—astrology.

Hooper and Henkel’s 16mm monster—destined to expand into 35mm—reveled in a stew of gore, oppressive weather, a miserable cast and crew, and many putrid smells that lingered while the world outside also raged. Assaults from the right, the left, and mindbenders in between, left many Americans escaping into hedonism, quaking at threats of economic collapse, and shuddering at a fusillade of media images reminding them of death, including numerous accounts of real-life ritual murders with a religious taint. With these varying subjects in mind, this book will look at "The Texas Chain Saw Massacre" less as just a movie and more as a multilayered hologram of astounding, confusing, and terrifying times.