The story of my new arms: An organ donor's gift helped me recover from war injuries

An IED injury in Afghanistan left Marine Sgt. John Peck a quadruple amputee with prosthetics until this surgery 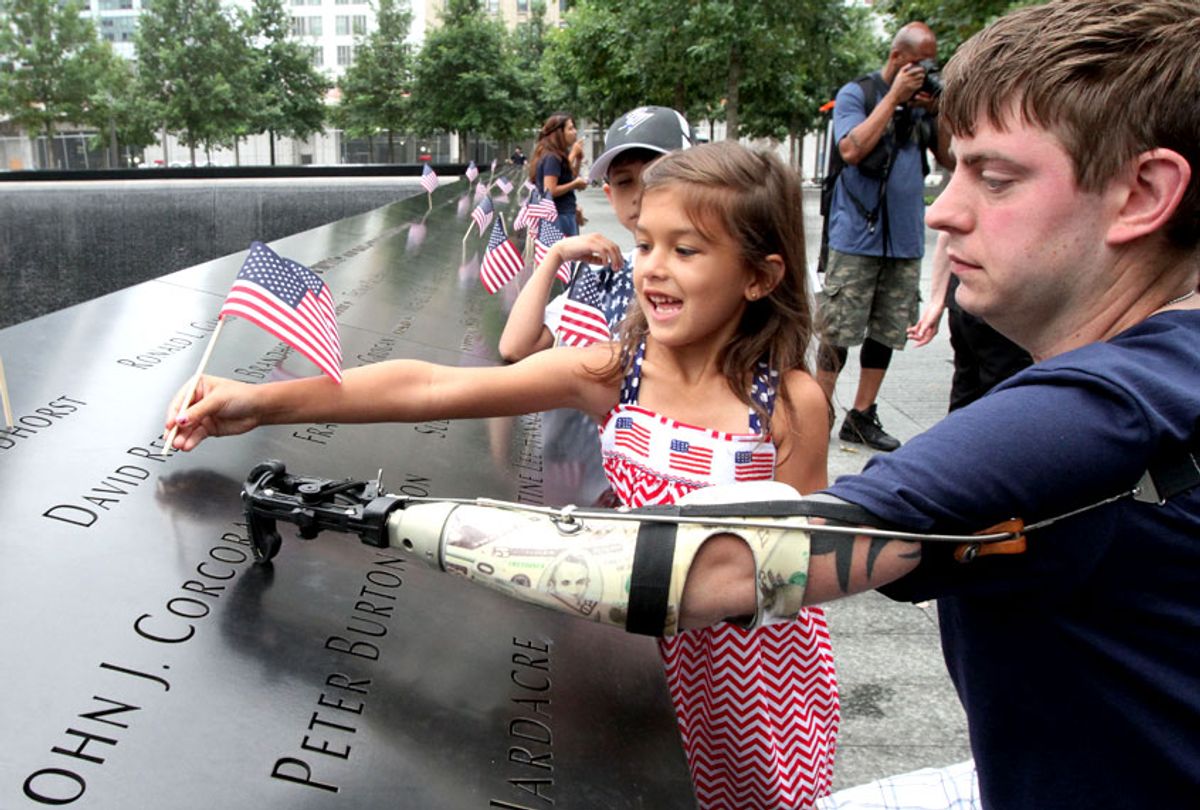 Retired Marine Sgt. John Peck, of Fredricksburg, Va., right, and Sophia Elwood, 7, the daughter of Peck's fiancee, place an American flag on one of the names inscribed at the south reflecting pool at the 9/11 Memorial in New York, July 4, 2014. (AP/Tina Fineberg)
--

Excerpted with permission from Rebuilding Sergeant Peck: How I Put Body and Soul Back Together After Afghanistan by John Peck, Dava Guerin, and Terry Bivens. Copyright 2019 by Skyhorse Publishing, Inc.

Sgt. John Peck (ret.) served two tours as a Marine during the War on Terror. He became a quadruple amputee after being injured by an IED for the second time, and received a groundbreaking bilateral arm transplant in 2016. John is one of only two military members to have gone through this complex surgical procedure. As a result, he has become an advocate for organ donation and encourages every American to become an organ donor. He now continues his philanthropy work and is becoming a motivational speaker focusing on inspiring corporations, non-profit organizations, and others with his message of hope and overcoming obstacles with humor and resolve. In "Rebuilding Sergeant Peck," he comes together with accomplished author Dava Guerin and Terry Bivens to tell his story.

The big day is finally here. Today, I’ll meet the press for the first time following my double arm transplant. I hate this kind of stuff. But the office of strategic communications at Brigham and Women’s Hospital in Boston, Massachusetts, stressed the importance of telling my story for the first time to the world. I can’t stand being the center of attention, but this time is different. I’m speaking for two people now, not just one.

It took a little while before I was ready for this moment. My doctors had to wait to make sure my new arms weren’t rejected and that I didn’t have any signs of infection. Plus, the pain sucked, and there was no way right after my surgery that I could speak in public without babbling my brains out, thanks to all the pain meds and just the normal stages of recovery from such a major surgery.

My mom told me about this type of surgery soon after my injury. Thank goodness she did. I did my own research, as well. My girlfriend, now my wife, Jessica, was there by my side all the way. Though at the time she only knew me for six months, she was my rock. She helped me get ready to travel to the hospital in Boston from my home in Virginia, helped me understand what was involved in such a groundbreaking surgery, and, most of all, was my support system. I couldn’t have done this without her. Jess used to call me her “penguin.” Now don’t get the wrong idea. What she meant was that emperor penguins meet their soul mates and stay together for life; Jess and I have no intention of messing with Mother Nature.

The morning of the press conference, which was held in a large room at Brigham, I felt a million different emotions. Just a few months before, I was a quadruple amputee. While it wasn’t a cakewalk living without arms and legs, plus suffering from a traumatic brain injury, I could still grab a plate from the cabinet thanks to my prosthetic arms and only needed help with things like putting on my shorts, showering, or running errands. I also needed someone there to help me with some other tasks that go along with being basically semi-independent. There were some days that I felt like s**t. It was humiliating having to ask someone to help me with the most basic things like brushing my teeth, washing my hair, and putting on my shorts. What a sucker punch for a guy who was a strong, tough Marine and now has to be treated like a helpless baby.

So, there I was ready to announce to the world what previously I thought was only a pipe dream.

Before we entered the room for the press conference, I was so keyed up that I said every swear word I could think of, just to get the tension out of my system. “F**k, f**k, f**k, s**t, s**t, s**t,” I repeated over and over. “Goddamnit, motherf**ker, s**t, s**t, s**t,” I continued to mumble to myself. I’m sure anyone who heard me cursing like that thought I was nuts! Jess, the doctors, and the chief communications officer heard me.

What they were worried about was me—a Marine after all—having an open microphone and saying something off-color out of pure nervousness. They said something like this: “Hey John, we’re going to wire you up right now, so as soon as you enter the room, watch what you say, or they’ll hear you.”

Fortunately, the Brigham communications team prepared me for interviews, and that did help to get me ready for this moment. I insisted, however, that I write my own remarks. They also prepped me for the fact that there would be plenty of media there and gave me some questions they assumed the press was bound to ask. We practiced my speech over and over in a kind of mock-interview setting, and someone remarked that I needed to read it with more feeling. I get it. It had to be done. But this was my body. My new arms. My story. And there was no way that I was going to convey someone else’s version of how I felt at this critical moment. It was as if I were having an out-of-body experience. Here I was going to tell the world my story, but now with someone else’s arms attached to my stubs. I felt my donor’s presence as I tried to hold back my tears.

As the press conference was ready to begin, I glanced over at all the reporters in the room. It was surreal. As my doctors and I sat behind a rectangular table that had microphones for us to answer the reporters’ questions, I was scared. But it was weird that I wasn’t scared for me, but more like overwhelmed that this moment was finally here. While I was basically happy, it hit me hard that someone had to die to give me this gift. I vowed I never was going to waste it.

While I did have my talking points ready to roll, I made a split-second decision to go for it and just tell these people what was in my heart. I said something like this: “Following my surgery, I looked down at my arms, and the minute I saw them, I knew they were a perfect match. The skin color was perfect. It seemed natural, and they were just like mine. The detail of my fingers was perfect, too.” I also told them that I was excited to be able to wear the bracelet on my new wrist that has the name of Cpl. Larry D. Harris, my fallen brother, on it. Let me tell you about him. Cpl. Harris died on July 1. He was a squad leader, like me, and was pinned down by machine gun fire. One of his men received small arms fire and was wounded. Cpl. Harris, without concern for his own life, rushed toward his men and immediately applied first aid. After it was decided to move his men to the CASEVAC site, Cpl. Larry Harris stepped on a pressure plate IED. His body absorbed most of the blast. He was awarded the Silver Star posthumously. We have a code in the Marines that says that we don’t look at skin color, race, or ethnicity. You are my brother as long as you would take a bullet for me.

I wear Cpl. Harris’s bracelet, not just because he was killed in battle, but to celebrate his life and all the other guys who lost their lives, as well. I will always love my buddies and never forget them. And now that I have my arms, our arms, I explained to the media, that bracelet will be the first thing that I put on when I’m able.

I felt the tears welling up inside me as I looked down at our arms with the world watching. My donor was a young man who died of a rare and fatal brain disease, though during the press conference, I didn’t know that. In fact, I knew nothing about my donor at all. His parents only came forward after they saw me at the press conference and heard me talking about their son. Soon after that, my donor’s father sent me a long and heartfelt message on my Facebook page. It simply said: “Hey, John, I have to tell you a story; we have a lot in common.” It was mind-blowing.

I realized my donor gave me a gift that he should have never have had to give. Because of his passing—and his courageous decision to donate his eyes, heart, kidney, liver, and skin, plus his two arms—I was able to become almost whole again. I made a promise to his parents that day at the press conference. I said: “I won’t let you down. I will do right by your son and fulfill my dreams of becoming a chef, thanks to his sacrifice.” While it was too painful for my donor’s parents to attend the press conference, I know they heard my words; I meant every one of them.

I’m no hero. But this guy, my brother, my organ donor, is mine. Together, we will overcome the tragedies in our lives. We will rebuild each other, one touch at a time.