Mueller's remark that charging Trump wasn't an option "opens the door for the Democrats to pounce," Napolitano says 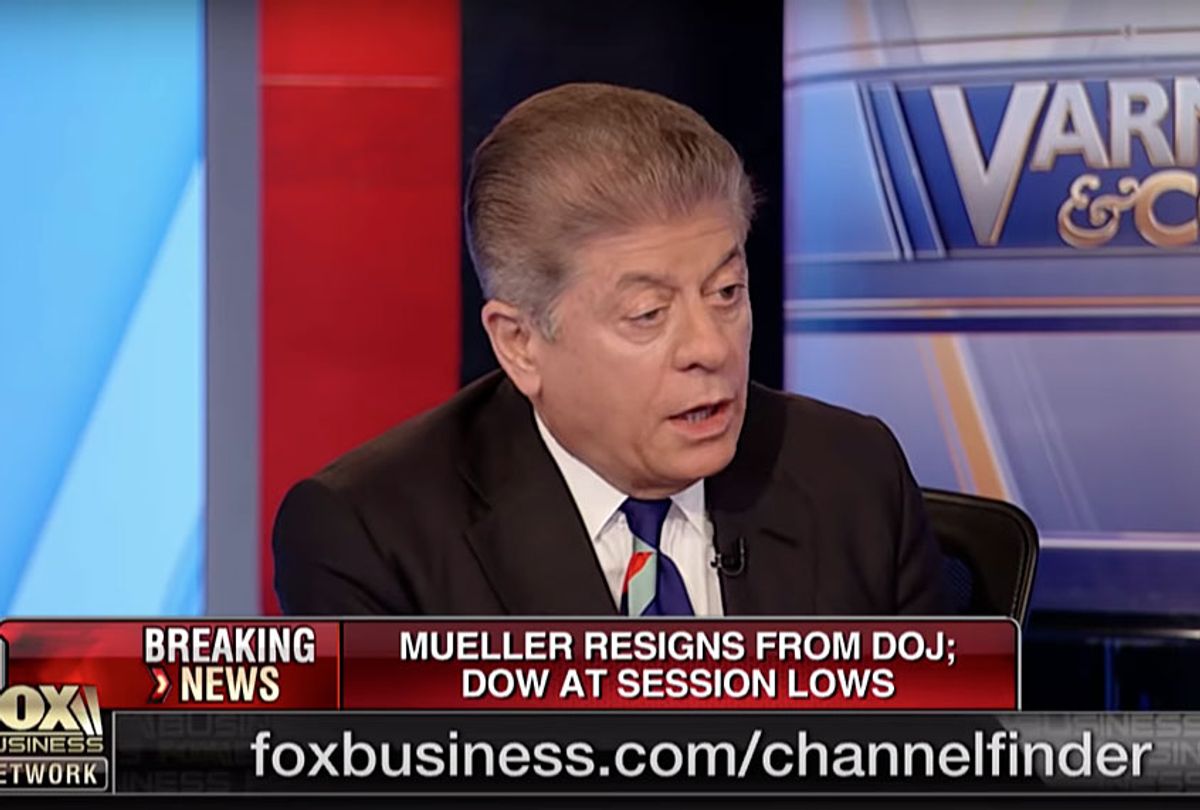 "Effectively, what Bob Mueller said is: 'We had evidence that [Trump] committed a crime, but we couldn't charge him because he's the president of the United States,'" Napolitano said Wednesday on Fox Business following the news conference. "That opens the door for the Democrats to pounce."

While his investigation detailed episodes of obstruction of justice by Trump, Mueller said Wednesday that charging the president was not an option his office could consider. In his first public comments since he was appointed special counsel two years ago, Mueller said he could not clear Trump's name and pointed to Department of Justice guidelines saying a sitting president cannot be indicted.

"We did not, however, make a determination as to whether the president did commit a crime," Mueller said, citing the law enforcement agency's longstanding policy that a president "cannot be charged with a federal crime while he is in office. That is unconstitutional. Even if the charge is kept under seal and hidden from public view, that too is prohibited."

Napolitano on Wednesday said Mueller's remarks were "180 degrees" from those made by Attorney General William Barr, who stated in a March 24 letter to Congress that the special counsel's findings were "not sufficient to establish that the president had committed an obstruction of justice office."

In response, Fox Business host Stuart Varney asked Napolitano, "Is it that bad?"

"I think so," Napolitano said. "I think basically [Mueller is] saying the president can't be indicted, otherwise we would have indicted him. And we're not going to charge him with a crime, because there's no forum for him to refute the charges. But we could not say that he didn't commit a crime. Fill in the blank, because we believe he did."

The special counsel's news conference was "hurtful to the president," Napolitano added.

Mueller on Wednesday announced he was formally closing the special counsel's office and resigning his post at the Justice Department. He noted he had not spoken publicly during his 22-month long investigation into Russia's election interference, alleged ties between the Trump campaign and Moscow and whether the president obstructed justice, saying he was "speaking out today because our investigation is complete. The attorney general has made the report on our investigation largely public."

Trump appeared to tout Mueller's remarks as an exoneration of his name. After the special counsel's press conference, he tweeted: "Nothing changes from the Mueller report. There was insufficient evidence and therefore, in our Country, a person is innocent. The case is closed! Thank you!"

However, the president's notion that the "case is closed" is not accurate. In the wake of Mueller's public remarks, Democrats in Congress appeared to mount a more aggressive stance toward impeachment, with some calling for impeachment proceedings against Trump to begin "immediately." Other lawmakers called on Mueller to testify.

Congressional Republicans, meanwhile, rallied behind Trump and stuck to their previous stance that the case of the Mueller investigation had been closed.

"Today's statement by Mr. Mueller reinforces the findings of his report," Senate Judiciary Committee Chairman Lindsey Graham, R-S.C., wrote on Twitter. "And as for me, the case is over. Mr. Mueller has decided to move on and let the report speak for itself. Congress should follow his lead."