This steak caesar has 5 ingredients (yep, including the dressing)

Caesar dressing ingredient lists love to be long-winded, but this one gets straight to the point 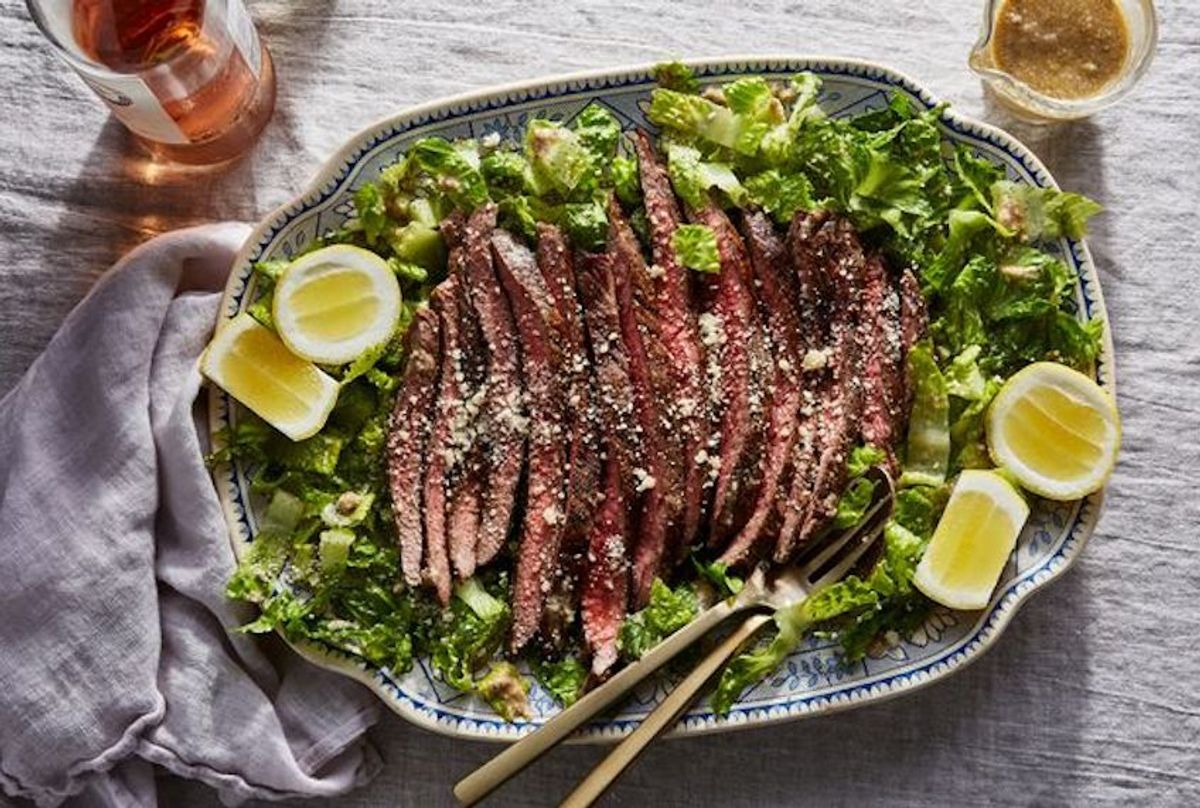 Though these days it’s an old-school staple — on menus everywhere from Nancy Silverton’s Osteria Mozza to Macaroni Grill — Caesar salad is barely older than my grandmother, who, my family assures her, is still only 89 years young.

Like many food inventions, this one was supposedly a matter of necessity. In 1924, Caesar Cardini, an Italian chef who owned a popular-with-tourists restaurant in Tijuana, Mexico was short on ingredients. So he threw together a little of this and a little of that and — ta da! — Caesar salad was born.

The irony is: Caesar dressing isn’t the sort of dressing you make when you’re short on ingredients. Compared to most vinaigrettes — like this maple-Dijon one, this horseradish one, and this red wine one — Caesar is pretty long-winded.

Of course, the specifics change from recipe to recipe. But the usual suspects are: anchovies, garlic, Worcestershire sauce, lemon juice, Parmesan, Dijon mustard, egg yolk (or coddled egg or even mayo), and, if you’re my mother, capers.

The thing is, you don’t need all, or even most, of those ingredients to make a dressing taste like Caesar. While sources like "The New Food Lover’s Companion" summarize Caesar as a “garlic vinaigrette dressing,” if you ask me, garlic isn’t the make-or-break ingredient. It’s anchovies. And a lot of them.

Spicy Dijon is equally repetitive since we’re adding plenty of freshly ground black pepper, an honorary Big Little ingredient. And even though eggs’ thickening powers seem unique, it turns out that if you blend a bunch of ground-up Parmesan into an otherwise thin vinaigrette, it becomes thick, almost like mayonnaise. 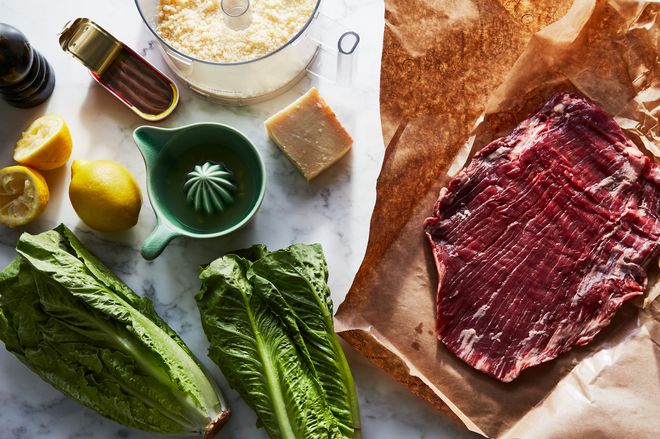 See how lean the flank steak is? That's why it wants — nay, needs! — a marinade. Photo by Bobbi Lin.

So we’ve got anchovies, lemon, and Parm (plus pantry staples, olive oil and black pepper). If you buzz these few ingredients together in a food processor, you get something that’s utterly Caesar-like. (Even though we ditched multiple ingredients and unsubtly avoided emulsifying egg yolks.)

It’s a dressing so good, we might as well use it twice.

Most restaurant menus include the option to add something to Caesar — say, grilled chicken or steak or salmon. Because on its own, Caesar salad is a great appetizer or side, but a hearty protein turns it into a full-grown meal.

Such is the case here, thanks to flank steak. This flavorful, lean cut gets a bad rap for being tough. But all you need is a marinade to make it even more flavorful and tender. A marinade like, say, fake-Caesar dressing. While the lemon juice acts as a tenderizer, the salty anchovies and Parmesan season the meat throughout.

Call it a Big Little update on an old-school dish. Or a 95-years-young dish. That’s better.