Go ask Alex: How I learned Alex Trebek really does have the answers

For one glorious evening in Budapest, the "Jeopardy!" host was my own personal Google 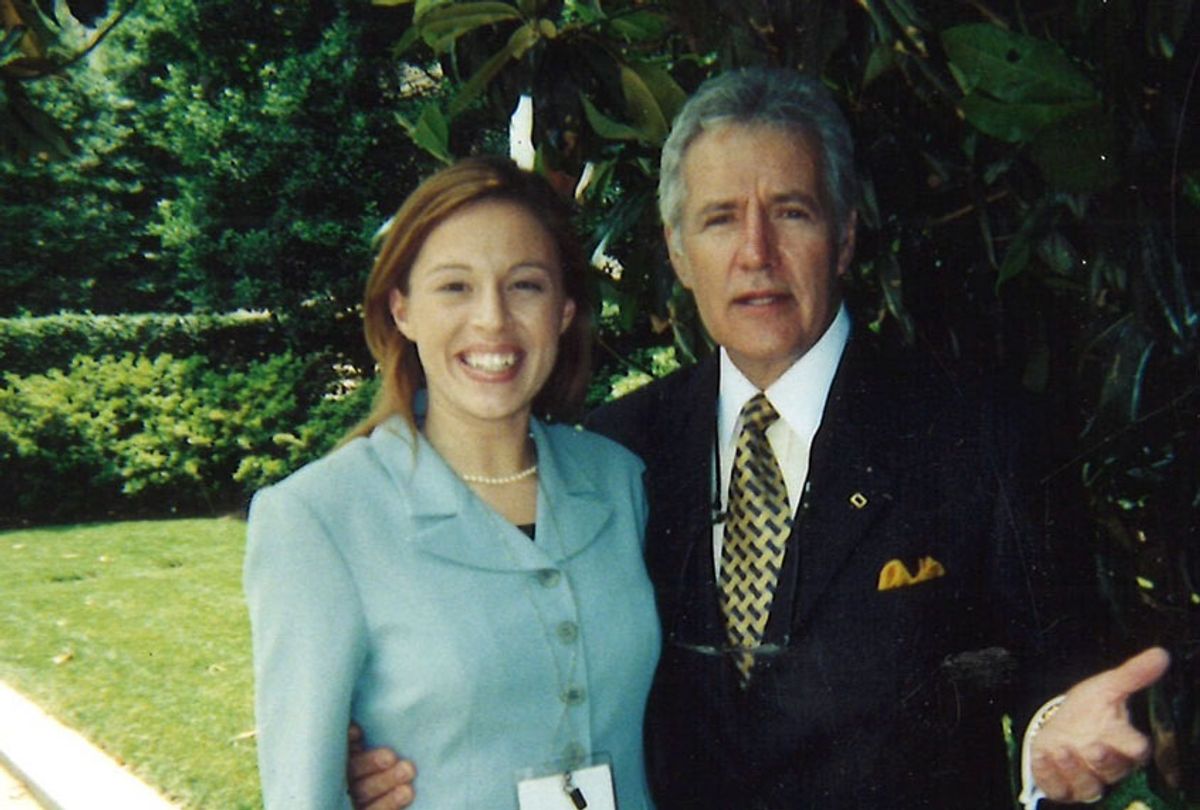 Meaghan Mulholland and Alex Trebek (Courtesy of the Author)
--

Odds are, you know someone who’s been on "Jeopardy!" — the beloved quiz show has been on TV since its revival in 1984. It’s less likely you know someone who has accompanied Alex Trebek to a train museum in Budapest, or eaten dessert with him at the Kansas City Marriott. There are only about three people in the world who can make both those claims, and one of them is me.

Upon learning of his cancer diagnosis, I’ve been thinking back to a simpler time, when in my twenties I worked in the least glamorous of all of National Geographic’s endeavors: geography education. We were a small staff of four running the GeoBee, the other nationwide contest for brainy children. “The only travel I do is to the copy machine,” I used to joke when people asked what it was like to work at the venerable magazine’s Washington HQ. Exploring the Amazon I was not. But a notable perk of the job was the chance to work with none other than Alex Trebek, American icon. He hosted our televised championship each year, acted as adviser and worked closely with us on the script.

Like most Americans, I grew up wedged on a couch with my family every evening as my parents fired questions at the TV. What is the Treaty of Utrecht? Who is Sylvia Plath? I was delighted to discover that in person Trebek was just as I imagined him to be: charming, slightly flinty, somehow both friendly and utterly inaccessible at the same time. I enjoyed having minor anecdotes about him to share at parties — he once jokingly threatened to beat me with a stick if I couldn’t name the capital of Canada (I couldn’t; he didn't); another time, he muttered “let’s drink!” as we entered a formal luncheon. But over time, I developed genuine gratitude for his devotion to our little contest. Though perhaps less apparent, Trebek’s passion for geography rivals his penchant for pronunciation. More than anything, I was amazed to realize he is in fact a trove of knowledge that goes far deeper than memorized trivia.

In the spring of 2005 we were in Budapest with teams of kids from 18 different countries who were competing in the GeoBee’s World Championship. It was surreal, hanging out with a famous American game show host in a place where hardly anybody knew who he was. It was even weirder to spend an evening with him at a train museum, surrounded by a group of rowdy international tweens. By that time, I’d worked for the Bee two years, and was no longer fazed when Alex caught tiny errors in our meticulously-researched questions, as he inevitably would — there was the time he reminded us that Kiribati, a tiny Pacific island republic, is in fact pronounced “Kiri-BAS;” another time when he questioned if the Chinese population stats used in an economics round were, in fact, accurate (they weren’t). Fiercely smart, precise, exacting — he was more than just a TV personality; this man knew his shit.

That night after dessert the kids messed around outside on some antique train equipment, climbing on a contraption I recognized from old-timey Westerns — a small flatbed on wheels, on which two people facing each other could use a lever to make it move forward or back. “What’s that thing called in English?” a Hungarian colleague asked. I drew a blank. My boss was similarly stumped. Then it hit me — of course I knew just who to ask. And he appeared at that moment like a summoned genie, strolling along the tracks with a chocolate cone in hand.

“Alex,” I shouted. “What’s that thing called?” I pointed at the levered contraption.

He replied, of course, without hesitation. “Hand cart.”

He knew; of course he knew. He knew about everything, from the dissolution of the Holy Roman Empire to the etymology of the word “dollop.” I was humbled, and not for the first time.

It’s been 15 years, but the memory is vivid: the dusk-pink sky, the sun setting over our time in Budapest; a rainbow of international kids playing happily on some railroad tracks, and Alex Trebek, like some messenger sent from the future, arriving to give us the answers.

Over the years, my anecdotes about him have lost potency; upon seeing a photo of us from back then, a 20-something recently asked, “Who is that, your uncle?” I rely on my phone for everything now, from driving directions to store hours to the name of that woman in the movie about the restaurant. If my children feel awe for any omnipotent being, it’s surely Siri. I worry about what this technology does to our brains, to our memories. Then I think of Alex Trebek — a man whose life has been spent in the pursuit of knowledge. For 30 years, he’s embodied for us ideals of fairness and competence, reassuring Americans that there are, indeed, correct answers to some of life’s questions, and that facts matter. In our current state, in which a single thoughtless tweet has the potential to trigger the downfall of civilization, he continues to show us that honesty and integrity and intellectual rigor have value. No matter what happens to "Jeopardy!" in coming years, he won't be replaced.

Meaghan Mulholland is a writer based in North Carolina. More work can be found at her website.