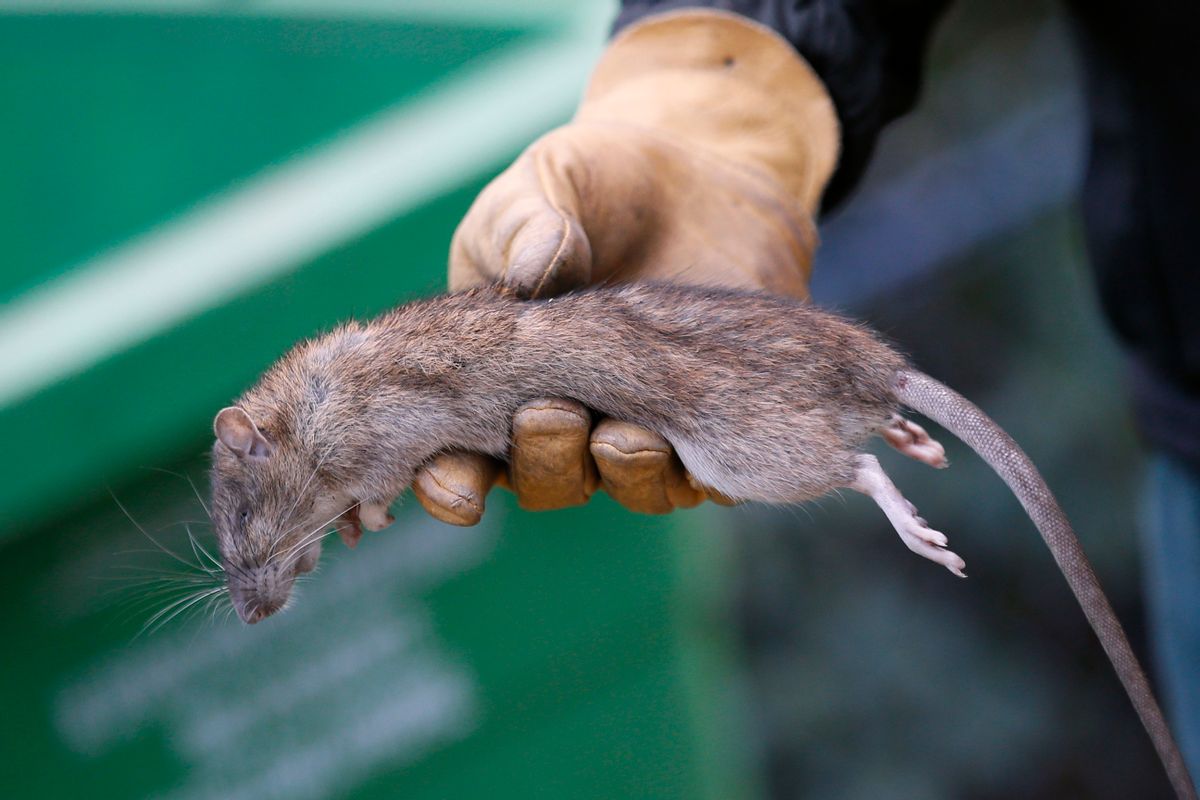 A Paris employee shows a dead rat in the Saint Jacques Tower park, in the center of Paris, Friday, Dec. 9, 2016. Paris is on a new rampage against rats, trying to shrink the growing rodent population. (AP Photo/Francois Mori) (AP)
--

Ticks, mosquitoes, tree-wrecking beetles, locusts. The list of pests expected to benefit as the planet heats up is long and getting longer. But what about rats?

The answer is tricky. Headlines have warned about a coming ratpoclaypse driven by climate change. But there isn’t a lot of research to back these warnings up. Part of the reason is that it’s hard to predict what rats will do, because it’s harder than you’d think to study what rats are doing right now.

It took Michael Parsons, a researcher at Fordham University, almost two years to get three facilities to let him tag rats and study them. Parsons is one of just a handful of biologists that studies New York City’s rats. Of those three that granted him access, Parsons will only describe two as “waste treatment facilities” in two different boroughs of the city. The third? “It’s super secret,” he said.

Parsons won’t name the places because, you know, rats. For a property owner, allowing Parsons to study rats at their facility means admitting they have a rat problem in the first place. In 2017, Parsons went so far as to offer $1,000 to anyone with a rat infestation who’d let him conduct research on their property. No one’s taken him up on it yet.

“I have shed more tears over this than probably anything else in my life,” he said. “It really has been enough to shut down multiple research studies. We just have it in our culture that rats are more of a taboo than other urban wildlife.”

It’s also one of the many reasons why we know so little about rats. Even basic information such as the number of rats in a city and whether their numbers are growing is hard to come by: Estimates of New York City’s rat denizens range between 2 million and 32 million. So understanding the effect of warming temperatures on urban rat populations is exceedingly difficult. Despite the scary headlines, a search for climate change studies about urban rats yields no results. Parsons, too, hasn’t come across any research on the subject.

But this much we know: Rats reproduce at a prolific rate, and they like warmer temperatures. The brown rat, the one most commonly found on the East Coast, can give birth to as many as six litters a year, with 12 pups per litter. For a number of reasons, rats tend to stay in their burrows longer during the winter. As more people stay indoors during the colder months, there’s fewer half-eaten hot dogs and bagels for them to feed on. And the chances of survival for the pups in winter is lower.

When temperatures are warmer, rats are likely to reproduce more. So it stands to reason that climate change will give them a boost. In the United States, spring is starting earlier, and average summertime temperatures are rising. In New York City, home to the infamous pizza rat, summer temperatures have increased 2.4 degrees Fahrenheit since 1970. A recent federal report found that on average temperatures across the country have increased 1.3 to 1.9 degrees.

Warmer temperatures for longer stretches of time also mean rats may reproduce more, which poses public health problems. Rats serve as hosts for ticks and fleas and carry diseases such as Salmonella and bubonic plague (the disease that brought us the Black Death). Add to this the fact that warmer temperatures allow ticks and fleas to breed longer and spread to new parts of the country, and the problem begins to compound.

Parsons, the Fordham University researcher, says that for these reasons, city rats need to be better understood. But trying to catch, tag and track them is difficult. The most commonly cited data when talking about changes in rat populations are calls to 311, New York City’s government-services and complaint line. News articles on the subject cite an increase in 311 calls about rats in the last few years. In New York City, rat-related calls increased by 10 percent last year compared to 2016. Washington D.C., Chicago and Boston have also seen increases in rat complaints in the last few years. But these calls aren’t a direct measure of the number of rats in a city. Rather, they measure the number of people who spotted a rat — then decided to make a call about it.

What might influence a person to call in a rat sighting? Whether they’re accustomed to seeing rats is part of it. Another is whether they believe calling will lead to a response from the city. The more upscale the neighborhood, the more likely someone is going to complain about a rat sighting, Parsons said. That might explain why the well-heeled Upper West Side in New York City logged the highest number of rodent-related complaints in 2017.

“No one really knows if rat populations are increasing or decreasing,” said Chelsea Himsworth, who leads the Vancouver Rat Project as a regional director for the Canadian Wildlife Health Cooperative. “I’ve never come across any reliable data.”

Still, Himsworth believes that rat populations are increasing because cities are growing and getting more densely packed.

Himsworth said warmer temperatures might help rats but that the knock-on effects of climate change will likely play a larger role. If a city floods more often as a result of climate change, for instance, waste management systems are more likely to falter, and more garbage winds up in the streets. “Rats are going to capitalize on chaos [and] climate change guarantees unpredictable events,” she said.

Another big unknown, Parsons said, is how people might respond to real or perceived increases in the number of rats. An aggressive response could limit their growth. In 2017, New York City Mayor Bill de Blasio declared a war on rats and invested $32 million in rat reduction measures. His plan included hiring more exterminators, new trash bins and cementing dirt basements in public housing.