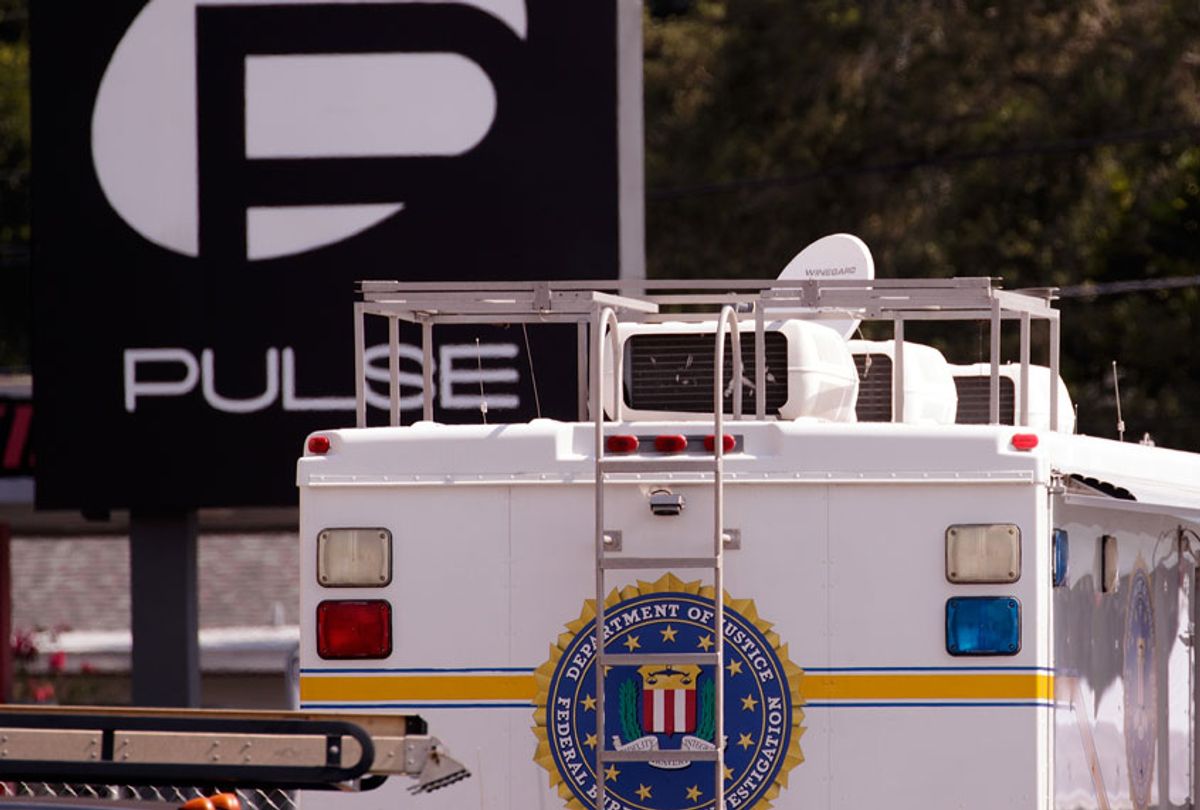 A vehicle belonging the Federal Bureau of Investigation (FBI) is parked at the crime scene at Pulse Nightclub on Orange Avenue, June 15, 2016 in Orlando, Florida. (Getty/Drew Angerer)
--

Today is the third anniversary of the massacre at Pulse Night club in Orlando, Florida. As we take time to celebrate the culture and bravery of our LBGTQIA citizens, we must also remember the 49 victims who were murdered in the most dangerous attack against the LBGTQIA community in history, and the role that irresponsible gun culture plays in such attacks.

Now House and Senate Democrats have introduced a bill that would allow shooting victims to sue gun companies, according to an NPR report.

The Equal Access to Justice for Victims of Gun Violence Act, cosponsored by Rep. Adam Schiff, D-Calif., would strip away federal protection from gun dealers, makers and traders when their products are used to commit crimes.

"Responsible actors in the gun industry don't need this limitation on liability.” Schiff told reporters at a press conference announcing the bill. “And the irresponsible ones don't deserve it."

Gun sellers and manufacturers are currently protected by The Protection of Lawful Commerce in Arms Act (PLCAA), signed by President George W. Bush in 2005. The PLCAA not only exempts firearm manufacturers from dealing with the impact guns have on society, but also shields them from facing civil lawsuits from survivors and families. So, if a Dylann Roof type wanders into a gun show and purchases weapons, then goes out and does what Dylann Roof types do, currently the person who sold him the guns and ammo would not be held accountable. This needs to change.

Lawrence Keane of the National Shooting Sports Foundation and other gun advocates are already prepared to work to kill the bill, which he is calling "fundamentally unfair."

"You would no more charge or blame Ford or General Motors for drunk driving accidents," Keane said, before stating that the current law is "working exactly how Congress intended it."

I’m not sure why Keane doesn’t understand that cars are made to drive and guns are made to kill. Mass shootings happen almost daily in the U.S. now; so far, we have had close to 150 in 2019. There aren’t comparable stats for people intentionally driving Ford or GM cars into crowds of people, killing and wounding those gathered in churches and at music festivals.

Do the thousands of American lives lost every year due to gun violence mean nothing to conservatives, gun dealers and the NRA? Maybe the threat of losing money will help them understand the need for reform.