The "Saturday Night Live" star machine is alive and well

Starring in movies used to be the big post-"SNL" dream. Now, the richness of TV opportunities beckons too 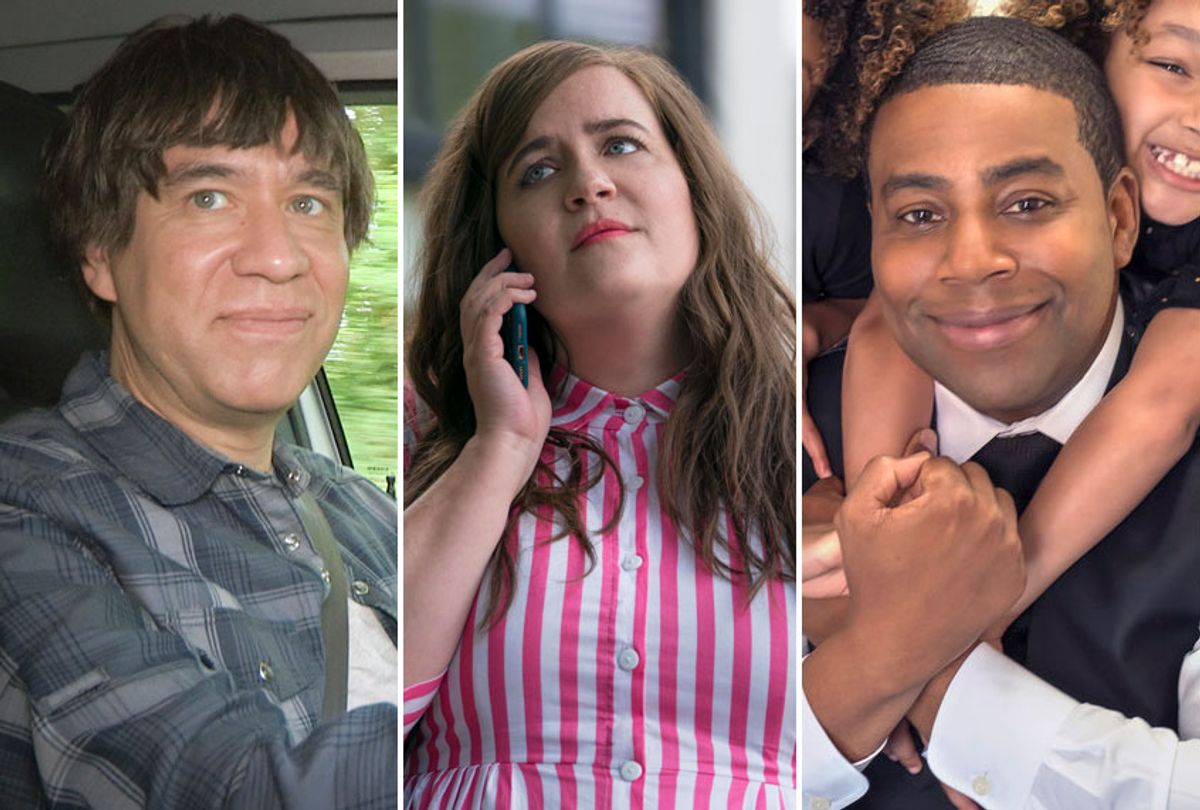 In the fall, Kenan Thompson, the longest tenured cast member on “Saturday Night Live,” will transition from late-night stalwart to a prime-time starring role. His new NBC series, “The Kenan Show,” pitches Thompson as a super dad to “two adorable girls,” a family man who works and navigates a meddling father-in-law played by Andy Garcia.

For a “Saturday Night Live” alumnus to score a starring role in a series isn’t necessarily a surefire gateway to greater stardom. Just ask Bobby Moynihan, who landed the CBS series “Me, Myself & I” only to see it vanish 10 episodes after its debut. Or John Mulaney, the former “SNL” writer who seems to be everyone favorite stand-up comedian now, but a scant five seasons ago was an object of ridicule as the star of his short-lived Fox show “Mulaney.”

Thompson, however, has the support of an entertainment machine that has refined its role as a launch pad to stardom, and the useful base of knowledge that must come with it, having spent 16 seasons with a show that turns 45 this fall. Thompson's keeping his “SNL” gig, thanks much, as is Aidy Bryant, whose Hulu comedy “Shrill” will return for a second season.

Bryant has enjoyed roles in films and guest appearances in a number of TV series since joining “Saturday Night Live” in 2012, but “Shrill” places her at the center of a viscerally funny and emotionally baring series that allows audiences to see shades in her talent toolbox that she doesn’t often get to showcase on the long-running weekend sketch show.

As the economy of television has shifted, so too has the means of transitioning “SNL” talent from weekend late night to the broadcast mainstage. To be a member of the “Not Ready for Prime Time Players” roster is still a badge of honor, of course. When the 45th season kicks off,  "SNL" will once again be one of the top go-to sources to help us process the insanity of the presidential campaign season, from pre-primaries to pre-convention. Alec Baldwin is set to return as the Orange Menace, and is likely to be the lead in countless Sunday and Monday morning takes.  But even if the ensemble is heavily reliant on impressions and noticeably lacking in signature character creations, and although no performer has control over how long “SNL” mastermind Lorne Michaels chooses to keep him or her or how vigorous his support may be, this current cast is populated with solid performers. Each individual tangibly contributes to the series' revitalized status and relevance .

A major change, one that’s been true for several seasons now, is that television seems to be the "SNL" player's preferred point of assimilation into the greater Hollywood ecosphere as opposed to film. This partly has to do with the overall decline in box-office viability for any mainstream film that isn’t connected to a blockbuster franchise.

But an even more direct reason likely has to do with Michaels’ experience with finding comedy unknowns and cultivating them, only to see them leave “SNL” behind for stratospheric fame: Eddie Murphy, Bill Murray (whose latest film, Jim Jarmusch's "The Dead Don't Die," just came out) , Chevy Chase and Dan Aykroyd. Michaels only started getting a piece of what his players created in “SNL” with the success of Mike Myers’ “Wayne’s World” and its sequel via his Broadway Video production company.

Broadway has produced or co-produced a number of their first TV series projects, including “Portlandia,” “Documentary Now!” “Late Night” and “The Tonight Show Starring Jimmy Fallon.”

Of course, one has to give a deep bow to Tina Fey, who not only transformed “SNL” as one of the series’ best head writers and resurrected “Weekend Update” but chose to write her own career destiny as a screenwriter and producer, with support from the "SNL" machine: Broadway was a co-producer on her breakout film “Mean Girls" and Michaels an executive producer on "30 Rock," Fey's primetime homage to her "SNL" years.

In years past, landing a theatrical release was the dream “SNL” side gig. Nowadays the most interesting players have a repertory slot and a series on the side. In Bryant’s case this seems workable, given the short order of “Shrill” and its summertime production schedule.

Business chatter aside, it is interesting to look back on this season and the pop culture landscape in general, and take stock of how extensively “Saturday Night Live” has quietly populated the world of popular culture as we know it in 2019.

In May, amidst the hullaballoo over a certain epic fantasy series ending badly (or brilliantly, depending on one’s outlook), “Barry” brought its second season to a close in stellar fashion. You may have missed that; if you did, go back and enjoy a power viewing of the second season which, for my money, is as good as or better than season one.

“Barry” is a terrific comedy for a number of reasons, but foremost among them is Hader’s evolution in the role as a hitman whose desire to change is thwarted by his past deeds ricocheting back on him. Hader can leave you breathless with laughter, but the finale revealed how frightening his depiction of unleashed rage can be. He’s already won an Emmy for his work in the role, and if he wins another it’ll be well-deserved.

Also deserving a tip of the hat, of course, is fellow “SNL” alum Julia Louis-Dreyfus, who closed down “Veep” in heroic fashion a week prior to the “Barry” season ender.

Hader’s dramatic flexibility may be matched by Fred Armisen’s incredible versatility. He’s another “SNL” player who kept his slot on the show while co-creating “Portlandia” in 2011, which he co-starred in until the sketch comedy show ended last year. (Armisen left the "SNL" cast in 2013, but he returns frequently as a guest performer.) Meanwhile he's also co-created “Documentary Now!” with Hader and Seth Meyers, who now provides one of the best reasons to say awake on a school night as the host of “Late Night with Seth Meyers.”

Armisen's new series “Los Espookys,” which he co-created with Julio Torres and Ana Fabrega, premieres Friday at 11 p.m. on HBO. And when he’s not doing that, he’s sitting in on gigs with the “Late Night” music crew as its bandleader.

The Lonely Island pre-dates “Saturday Night Live,” but Akiva Schaffer, Andy Samberg, and Jorma Taccone joined the series as a package deal in 2005 and recently dropped a “visual poem” (also knowns as a special) on Netflix titled “The Unauthorized Bash Brothers Experience,” accompanied by a conventional album.

Samberg became the break-out as we know, and the NBC series “Brooklyn Nine-Nine” grew from a TV vehicle for him to one of the funniest, socially conscious ensemble comedies on TV.

This doesn’t even take into account the contributions of “SNL” GOATs Fey, Amy Poehler, Will Ferrell and Adam McKay who have a hand in creating, producing or appearing in works including “Wine Country” and “Unbreakable Kimmy Schmidt” (Fey), “Broad City” and “Parks and Recreation” (Poehler), “Succession” (McKay) and “Drunk History” (McKay and Ferrell by way of their venture Funny or Die). Adam Sandler keeping dropping surprises and bombs on Netflix. And there are other “SNL” talents like Maya Rudolph who can pretty much pop up whenever they want, wherever they want, be it a Netflix comedy or "The Good Place," and be greeted with sheer glee.

This is merely a sampling, mind you, and by no means a complete one.  Pete Davidson is in a couple of upcoming movies, including "Going Places," John Turturro's crime comedy spinoff to "The Big Lebowski."  Whenever Kate McKinnon decides to break away from "Saturday Night Live," count on her joining the ranks of Kristen Wiig, Poehler and Fey; she's appearing in the Jay Roach-directed drama "Fair and Balanced," a depiction of the sexist environment inside Fox News, alongside film heavy hitters Margot Robbie, Allison Janney, Nicole Kidman and Charlize Theron.

Cecily Strong's ascent is just beginning, and I’d love to see Leslie Jones break out in a way that suits her. Likewise, it's been fascinating to watch Wiig evolve from her “Bridesmaids” days to scoring the role as Wonder Woman’s nemesis Cheetah in “Wonder Woman 1984,” coming out next year.

She’s not even the first superhero “SNL” has given to the world. The show has a fingerprint on Marvel’s “Avengers” franchise; many people forget that Robert Downey Jr.’s first major gig was to score a repertory player slot on the show. That may have been because his time with “SNL” only lasted for a year, coinciding with the legendarily terrible 11th  season.

He was fired, but he was in good company; Joan Cusack, Anthony Michael Hall, Danitra Vance and Randy Quaid also were let go that year.

Anyway, everything worked out well enough for these folks in the end, just as we suspect that Thompson, Bryant and others in the current cast have bright futures and now, even clearer avenues to success than many players who came before them.

Maybe “The Kenan Show” will take off and Thompson will end his record-setting stint on “Saturday Night Live.” Perhaps it won’t, and Thompson will continue his streak. Unlike the men and women who came and went from the series before him and Bryant, there more avenues to stay in the spotlight than there ever were, all roads that connect and perhaps even lead back to Studio 8H.