End Days foodways: More and more of us are gaming the apocalypse, others ask "why bother?" 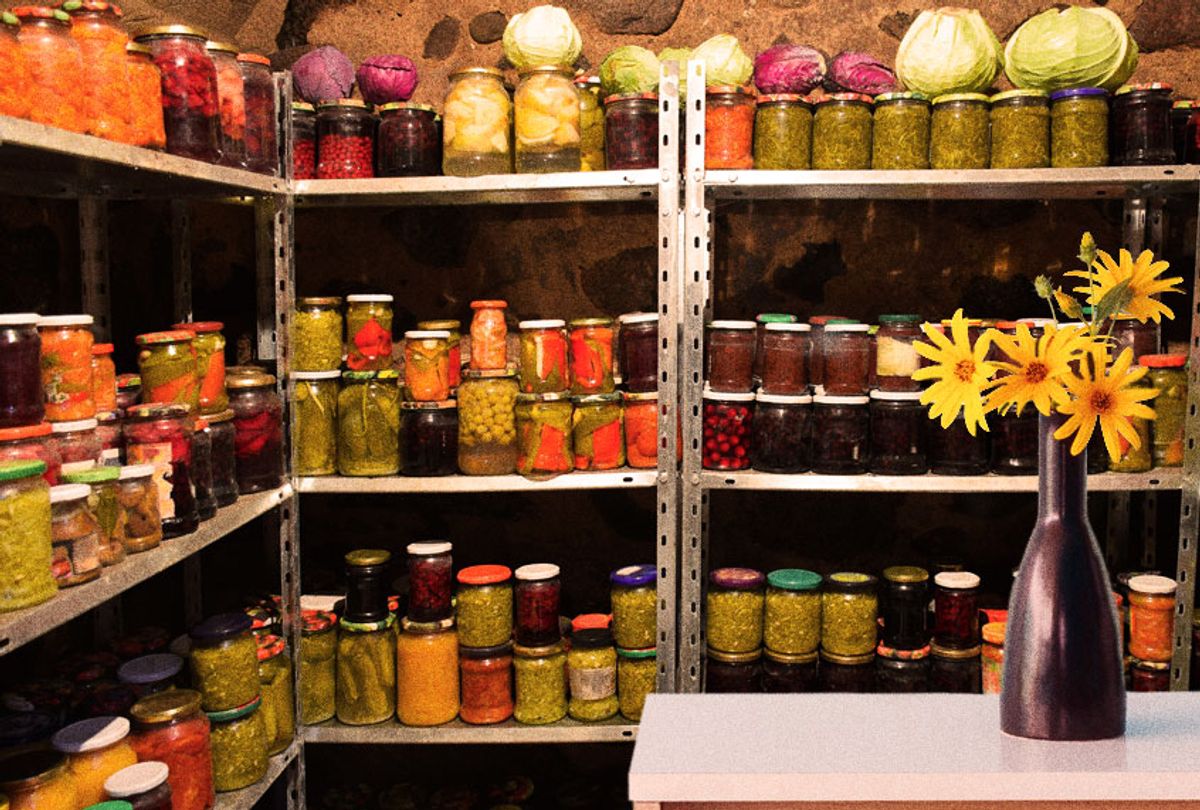 When I was six years old, I was lying on the floor in the living room with my older sister, Mercy, eight, who was doing a school project about the indigenous tribes of Canada. She was carefully mapping out where each tribe lived and what their primary source of food was. “Mohawk’s like to fish as well as hunt. The Prairie tribes like the Ojibwa hunt buffalo which they salt so it will last them through the long winters.”

She was getting to the people’s of the great north when she looked up from her color-coded page and said, “If you had been born an Inuit, you’d be dead.”

She had a good point. I am deathly allergic to pretty much everything found on an Inuit menu; fish, fish, fish and for feast days, fish.

I was born dead, a blue baby. Blue may have been my initial blush, but when I finally took my first breath, I bloomed an eczema-inflected violent red. Naturally, tests were done to see what other horrors I might hold in store. My allergies popped up immediately, and besides fish being out to get me, there’s nuts, mold, grass, trees, so basically the entire world around me.

My other quirks wouldn’t manifest themselves until a little later: dyslexia, restless leg syndrome and a general bratty personality that used to drive my poor father to distraction. I would hear him often lament that if only I were a boy, he would have had the satisfaction of sending me off to military school. It is annoying when people are sickly; there’s no doubt about that. And allergies are the most annoying of annoying illnesses. For the person who suffers, we live with the fact we are often a snot-soggy, swollen mess. We do things like scratch our throats — an internal sucking that produces a horrible sound. We tear at our tearing eyes and sneeze loud enough to cause a tsunami. We also have this pious, pompous way of making everyone aware of our affliction.

For anyone unfortunate enough to have to deal with allergy sufferers, they live in fear that the anchovy melted in the bolognese for that extra umami might very well kill a person (me).

It was upsetting when Mercy told me that if I were an Inuit, I’d be dead. My first thought was that I’d never be able to travel. I wouldn’t survive outside the safe bubble of family and friends who knew about my allergies. A couple of years later, I learned that whales were mammals, and I felt a bit better. I could live in the Arctic with a people who knew nothing of greens or chicken (at least they didn’t when I was a kid). This confidence was shattered when,  by chance in Nova Scotia I got a whiff of whale meat and found it decidedly fishy, mammal or not.

My fear of never being able to travel proved unfounded. But I have learned in pretty much every language how to emphatically say, “Fish? Nuts? Me? Dead.”

But there is only so much you can guard against. Something I learned from my aunt who lived in fear of a nuclear attack. She devoted an insane amount of time and energy planning how we were going to survive the blast. Her greatest concern was that Montreal was an Island. What would be the state of the bridges if a Russian bomb, meant for the States, got mixed up and instead wallopped innocent old Canada? She never quite worked out a viable alternative escape route, but she did solve for the threat of starvation. Over fifteen years, she haunted the markets, buying up overstocks until she had amassed a storage shed worth of tinned food. Mostly salmon, tuna, and sardines.

You could see why, as an impressionable young girl, I was a bit nervous. Finally, one day, I asked what she had planned for me. I remember how stricken she looked. “Pet!” she cried, grabbing me by the face. “I’m so sorry.” The very next weekend she informed me she was now laying in tins of baked beans. Every kid loves beans on toast, but I was aware that living in a bunker, the rest of humanity’s charred remains above our heads, that beans could become a bit redundant.

I was reminded of my aunt the other day when I picked up a copy of the  New Yorker and read a piece about the owners of the famed Montreal restaurant Joe Beef, David McMillan and Frédéric Morin who have just published a cookbook called “Joe Beef: Surviving the Apocalypse.” McMillan has taken a page right out of my aunt’s playbook and has kitted out his cabin on a lake in the Laurentian Mountains with enough dry goods to last him and his family a year. As the world crumbles they can survive by fishing, eating legumes, augmented, I hope, by a few jars of decent mustard, good olive oil and plenty of vinegar. I would expect nothing less from a world-class chef.

I haven’t had a chance to read the book yet, and truthfully I have tended to stay away from DIY manuals since I realized that whether I lean in, tune out, breathe deeply, or create vision boards, my life still plays out without me having any control whatsoever.

Which isn’t to say I am not a sucker. So even though McMillan andMorin's recipes for the apocalypse were written with a playful wink to a dire future, I am perfectly willing to listen to tips on how to build a bunker and grow vegetables in the dark because satirical or not, the book is tapping into the zeitgeist. We are all planning for the end of the world, except a few deluded idiots who think the money they squirrel away bleeding the earth dry will buy them a ticket to Mars, or the Moon, which according to Trump, is a sister satellite. Who knew?

I don’t know what the end of humankind will look like, but I imagine it will be slow and painful: water shortages, food scarcity, hideous lesions and I am pretty sure whatever we stockpile won’t be enough, and really, do you want to be the last survivor? How lonely. My aunt’s post-nuclear stash of food eventually swelled with botulism and one by one the tins burst open.

But should I be one of the unlucky survivors, I can see myself emerging from my post-apocalyptic bolt hole, stumbling back out into the pale sunlight into a blighted landscape, starving, thirsty, only to spot something in the distance. Rushing over, I’ll fall to my knees, and find, half submerged in the sand, a tin of Iranian Sevruga 000 Caviar. The caviar (retail price, eight grand) in my shaking hand, Mercy’s words will come back to haunt me, “If you can’t eat the only thing on hand, well, then, it’s curtains for you.”