I don’t feel bad for Kyle Kashuv losing Harvard: He gets a glimpse of what it’s like to be black

Kashuv's racist comments caught up with him. Now he knows what it's like for youthful mistakes to define his future 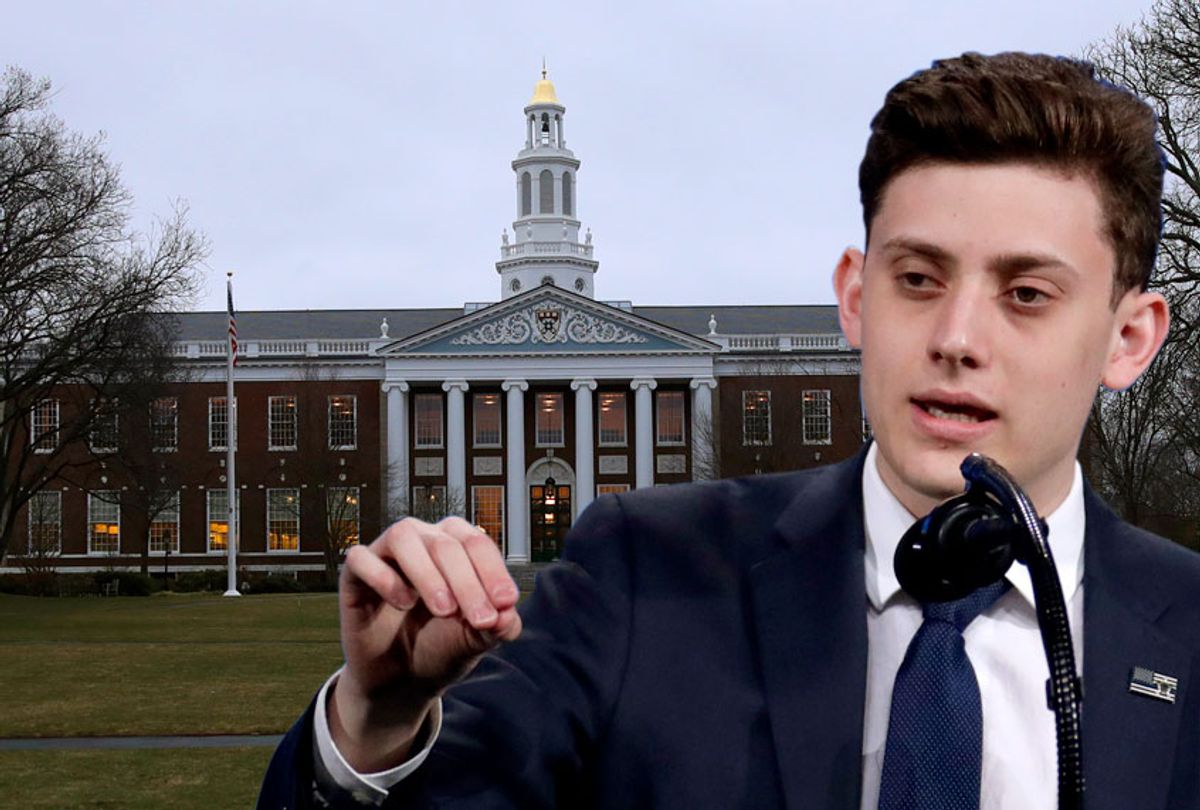 Kyle Kashuv losing his admission to Harvard is the dose of reality that America needs now.

Public opinion, at least on the internet, appears to be split over Harvard’s decision to disinvite Kashuv from joining its incoming freshman class. Kashuv, 18, rose to prominence as a young conservative star after he survived the Parkland shooting at Marjory Stoneman Douglas High School in 2018. While many of his other classmates used the media attention to advocate for gun control, as they fought to deal with the trauma of seeing their classmates murdered, Kashuv did the opposite, becoming the high school outreach director for the conservative group Turning Point USA, lobbying for more guns in schools, and even meeting President Donald Trump.

Kashuv’s grades (a weighted GPA of 3.9), SAT scores (1550), platform, activism and extracurricular activities granted him acceptance into one of the most celebrated Ivy League universities in the nation. This all collapsed when Kashuv’s repeated use of the n-word in private chats and documents hit the internet in late May.

“A few weeks ago, I was made aware of egregious and callous comments classmates and I made privately years ago — when I was 16 years old, months before the shooting — in an attempt to be as extreme and shocking as possible.” Kashuv wrote on Twitter. “I immediately apologized.”

So months before the shooting, when he had no public profile, it was OK to use the n-word? But after the shooting he decided that he shouldn't use that word anymore? Really?

The school  responded, stating that Harvard “reserves the right to withdraw an offer of admission.”

Kashuv's Twitter thread documenting his account of what lead to Harvard’s decision to cut ties with him went viral. Other high-profile conservatives like Ben Shapiro were outraged, rushing to Kashuv’s defense.

“Regardless of what you think of @KyleKashuv -- and for the record, I think he, like many other Parkland survivors, has handled the public limelight with grace and strength,” tweeted Shapiro, “Harvard's auto-da-fe sets up an insane, cruel standard no one can possibly meet.”

Shapiro should know that thousands of students meet those "insane, cruel" standards every year. The requirements are not that difficult: don't be a public racist. I’m sure there are plenty of private racists slipping through the cracks­ at Harvard; we see the effects of their beliefs throughout the institutions shaped by graduates of elite institutions, from racist mortgages and racist policing to racist government policies and the political momentum needed to elect a racist president. But at a minimum, Harvard would like them to keep it off the internet.

Kashuv is a child. I believe in growth; we all have made mistakes. We don’t know if he is sorry that he said the n-word or just sorry that he got caught saying the n-word, but I suspect it's the latter. Kashuv is far from stupid — he was admitted to Harvard, after all — so he should’ve been smart enough to get out in front of this story instead of allowing someone else to leak his dirty racist secrets. But by losing his berth in Harvard's freshman class, he enters into an even more rarefied space than the Ivy League: Kashuv is now one of the few privileged white people with the opportunity to get a glimpse of what it's like to be black in America.

To be black in America is to be vulnerable to being denied access — to education, to employment, to housing — for any number of reasons, ranging from the simple fact of the color of your skin to doing what you had to do to survive childhood poverty. I have a whole collection of friends who are now locked out of society because of mistakes they may or may not have made as children. (Contrary to the myth, all juvenile records don't automatically disappear when a person turns 18.)

These friends didn’t spew hate for the sake of being as “extreme and shocking as possible” but were simply poor and too young to be employed legally, so they hustled on the streets because that was the only way they could feed their families. If they survived the shootings in their neighborhoods, the president didn't sit down with them to hear their concerns. So many of them will never have the opportunity to explore the America of opportunities — like giving conference speeches and making media appearances — that Kashuv has enjoyed and will likely go on to enjoy in his secure future. They are locked into the reality of poverty and prison, based on the things they did to survive the random draw of their childhoods.

If Kashuv is really sorry and wants forgiveness for his racist comments, then he should apply to an HBCU and attend whichever school will have him, performing community service while he's there to try to alleviate the actually insane and cruel standards that punish poor black kids for trying to survive in a system that offers them no benefit of the doubt.

I don’t feel sorry for Kashuv at all. It's not a tragedy to be denied a spot at Harvard, even after initial admission. He will continue to have other options. But I do hope other young people learn from his experience the next time they want to try to be as "extreme and shocking as possible," especially on the internet. Anyone's life can be "reduced to a headline" if the words are already there.