Authors can be competitive and they hold grudges. These literary feuds go the distance 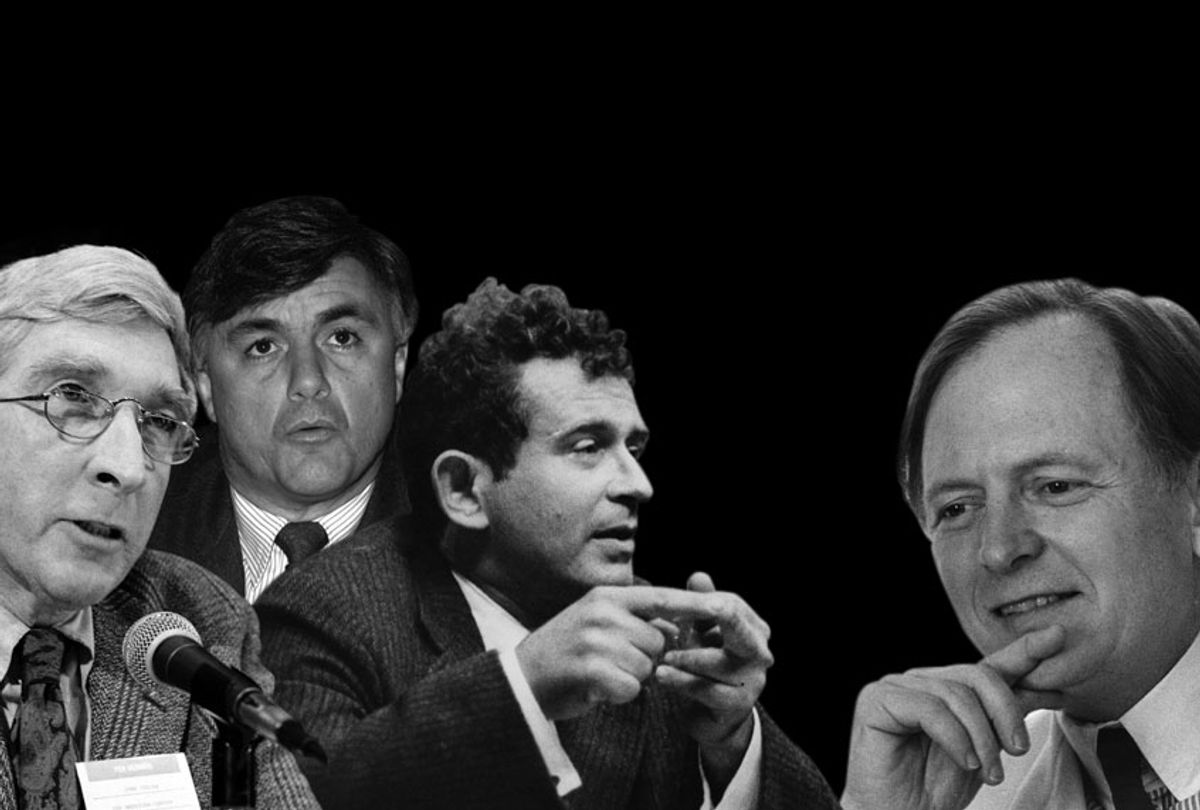 Excerpted with permission from "For the Love of Books: Stories of Literary Lives, Banned Books, Author Feuds, Extraordinary Characters, and More" by Graham Tarrant. Copyright 2019 by Skyhorse Publishing, Inc. Also available at Barnes & Noble and your local bookstore.

A treasure trove of compelling facts, riveting anecdotes, and extraordinary characters, "For the Love of Books" is a book about books—and the inside stories about the people who write them. Writers are a competitive bunch. They jealously monitor the success of their rivals and darkly catalogue their own all-too-public failures. Sensitive to any criticism or slur, real or imagined, they respond with the weapons closest to hand: words. Over the years this has sparked some lively literary feuds.

Socially they were poles apart. George Gordon Byron, 6th Baron Byron of Rochdale (1788–1824), was educated at Harrow and Cambridge before taking his seat in the House of Lords. The publication, in 1812, of Byron’s long narrative poem "Childe Harold’s Pilgrimage" had catapulted the poet to fame. His flamboyant lifestyle added to his public celebrity and, in the words of Lady Caroline Lamb, with whom he had a well-documented affair, Byron was ‘mad, bad, and dangerous to know’. John Keats (1795–1821) was the London-born son of a livery-stable keeper, leaving school at the age of fifteen to become apprenticed to an apothecary. A medical student at a London hospital, he struggled to make ends meet and to get his poetry published.

Byron, among others, snobbishly dismissed Keats as a mere ‘Cockney poet’. In a letter to his own publisher John Murray, he more graphically referred to ‘Johnny Keats’ piss-a-bed poetry’, adding, ‘there is no bearing the drivelling idiotism of the Mankin’ (‘little man’). Meanwhile, as far as Keats was concerned, Byron’s work lacked originality and was overrated by his adoring readers. His success, he claimed, was all down to the poet’s aristocratic pedigree and glamorous image. He once bitterly observed to a friend: ‘You see what it is to be six foot tall and a lord!’

They started as friends and collaborators. Born in Hannibal, Missouri, Mark Twain (1835–1910) gravitated to San Francisco where he met Bret Harte, a poet and writer of short stories and editor of a journal called The Overland Monthly. The more experienced Harte (1836–1902), whose humorous tales about Californian gold miners were very popular, helped smooth the rough edges of Twain’s apprentice literary style. The two men transferred to the East Coast and decided to co-write a play, which they titled "Ah Sin" (1877). It proved to be a disastrous collaboration.

The root of the problem was not artistic but financial. Harte asked Twain for a loan, which the latter refused. Instead, he proposed paying Harte a weekly salary of $25 to work on a second play. This time it was Harte, insulted by the offer, who refused. The two men fell out, avoiding each other’s company even on the opening night of their play. That same year, Harte was considered for a diplomatic post overseas. Twain took the extraordinary step of writing to the American president, James Garfield, in an effort to block the appointment. To an intermediary he wrote: ‘Harte is a liar, a thief, a swindler, a snob, a sot, a sponge, a coward, a Jeremy Diddler, he is brim full of treachery.’ Harte did get a job as a United States consul, but no thanks to his former partner. Even after Harte’s death in 1902, Mark Twain pursued the vendetta. In a volume of autobiography, he recalled: ‘In the early days I liked Bret Harte . . . but by and by I got over it.’

Herbert George Wells (1866–1946) burst onto the British publishing scene with his science-fiction novel "The Time Machine" (1895), followed in the space of three years by "The Island of Doctor Moreau" (1896), "The Invisible Man" (1897) and "The War of the Worlds" (1898) – all destined to become classics of the genre. An early admirer of his talent was the American-born novelist and short story writer Henry James (1843–1916), who had made England his home since the 1870s. James, the pre-eminent American writer of his time, dubbed ‘The Master’, heaped praise on the young Wells: ‘You are, for me… the most interesting “literary man” of your generation – in fact, the only interesting one.’

It wasn’t to last. The two men didn’t agree on the nature of literature, or on its role in society. For James, its importance was simply as an art form, the creative composition an end in its own right. For Wells, a trained biologist and political reformist, literature was essentially a tool for expressing ideas. Their differences, exchanged in a series of letters, were irreconcilable. In 1915, a year before the older man’s death, Wells published a satirical novel entitled "Boon," in which he caricatured James and parodied his verbose style of writing, likening it to a hippopotamus trying to pick up a pea in the corner of its den. A wounded but ever-courteous Henry James mildly rebuked the author for the ‘bad manners of Boon’, which finally drew a line under their relationship.

Two of the brightest stars of America’s post-war literary scene, Norman Mailer and Gore Vidal were destined to collide. Mailer (1923–2007) was born in New Jersey to middle-class Jewish parents. A precocious student at Harvard University at the age of sixteen, he had his first short story published two years later. Vidal (1925–2012) was a child of the Washington political establishment. His grandfather was a famous senator, his father a high-flyer in the burgeoning aviation business. Both writers produced first novels based on their wartime experiences, with Mailer’s "The Naked and the Dead" (1948) infinitely the more successful. Both unsuccessfully ran for political office, Mailer for Mayor of New York, Vidal for the US Senate. Mailer won two Pulitzer Prizes (one fiction, one non-fiction); Vidal was a brilliant essayist and Broadway playwright. Both men had egos to match their achievements.

They knew each other well, but the relationship was always edgy. In 1971, in reviewing Mailer’s book about the feminist movement, "The Prisoner of Sex," Vidal provocatively compared the author to the killer Charles Manson. When the two writers later met on "The Dick Cavett Show," Mailer angrily brought up the subject (in the hospitality room earlier, he had thrown a punch at Vidal). A visibly nervous Cavett managed to defuse the situation, though it made for riveting television. Six years later, at a New York gathering in honour of Princess Margaret, the pugnacious Mailer threw a drink in Vidal’s face then punched him in the mouth. The bloodied Vidal’s response was typically verbal: ‘Norman, once again words have failed you.’ In 1984, Mailer called a truce — an uneasy peace which lasted the rest of their lives.

During the 1960s, Latin America’s two literary giants had been friends and one-time roommates. The Colombian Márquez (1927–2014) achieved international fame with his 1967 novel "One Hundred Years of Solitude." Vargas Llosa, nine years his junior and from neighboring Peru, followed suit with "Conversation in the Cathedral" (1969). In the way of modern itinerant writers, they flitted from country to country, crossing paths from time to time. In 1976, they bumped into each other in Mexico City.

It was Valentine’s Day and the two amigos had been attending the premiere of a documentary about the survivors of a plane crash in the Andes. As the story goes, Márquez warmly greeted his friend outside the cinema, arms outstretched: ‘Mario!’ Llosa’s response was to punch Márquez in the eye, shouting: ‘How dare you come and greet me after what you did to Patricia [Llosa’s second wife] in Barcelona!’ Patricia, it seems, had sought consolation from ‘Gabo’ after Llosa had temporarily left home in romantic pursuit of someone else. The matter appeared to hinge on just what form the consolation had taken. Whatever the truth, Márquez displayed a shining black eye to the press the following day and the two men didn’t speak to each other for thirty-one years. A reconciliation of sorts took place in 2007. When Llosa was awarded the Nobel Prize in 2010 (Márquez had picked up his in 1982), his erstwhile friend was among the first to congratulate him.

The American writer Paul Theroux was teaching at the university in Kampala, Uganda, when he first met V. S. Naipaul. It was 1966 and the Trinidadian-born novelist was a visiting scholar. The two men became friends and when Theroux moved to the UK a few years later, Naipaul acted as his guide and mentor. Theroux (father of Louis Theroux, the documentary filmmaker) achieved international fame with his bestselling travel book "The Great Railway Bazaar" (1975). Naipaul’s own reputation had continued to grow, his early comic novels giving way to a much bleaker view of the world (one that would earn him the Nobel Prize in 2001). However, when the American wrote critically of Naipaul’s work, the relationship between the two men cooled.

Things came to a head when Theroux spotted copies of his books, affectionately inscribed to Naipaul and his first wife Pat, on sale in a rare books catalogue. When he confronted Naipaul about the matter, the latter brushed him aside, saying: ‘Take it on the chin and move on.’ Their spat became public in 1998 when Theroux published "Sir Vidia’s Shadow: A Friendship Across Five Continents," a memoir which portrayed Naipaul in an unattractive light. The feud lasted 15 years. Then, in 2011, fellow author Ian McEwan helped broker a reconciliation at the Hay Literary Festival. The two men shook hands, paving the way for a happy ending.

Tom Wolfe (1931–2018) leapt to fame in the late 1960s with a gaudy new style of journalism that brilliantly tapped into America’s liberated social scene. His linguistic pyrotechnics were reflected in the titles of books such as "The Kandy-Kolored Tangerine- Flake Streamline Baby (1965) and The Electric Kool-Aid Acid Test" (1968). A skilled self-publicist, Wolfe made himself instantly recognisable with his trademark white suit, hat and shoes. In 1987, he turned to fiction with "The Bonfire of the Vanities," a critical and commercial success. His second novel, "A Man in Full" (1998), took him a decade to write.

Two of America’s most eminent men of letters, Norman Mailer and John Updike, panned the new novel. Updike dismissed it as ‘entertainment, not literature, even literature in a modest, aspirant form’. Mailer compared reading the voluminous text to making love to a 300-lb woman: ‘Once she gets on top, it’s over. Fall in love, or be asphyxiated.’ The wounded Wolfe responded by referring to the pair as ‘two old piles of bones’. At which point fellow novelist John Irving ("The World According to Garp" and "The Cider House Rules") weighed in. Of Wolfe’s fiction, he said: ‘It’s like reading a bad newspaper or a bad piece in a magazine. It makes you wince.’ He then went on to say that on any page of a Wolfe novel he could ‘read a sentence that would make me gag’. The man in the white suit retaliated by comparing his distinguished critics to the Three Stooges – Larry, Curly and Moe. ‘It must gall them a bit that everyone, even them, is talking about me.’