The quiet alarm of "Years and Years": A slow slide into dystopia, with cozy family dinners intact 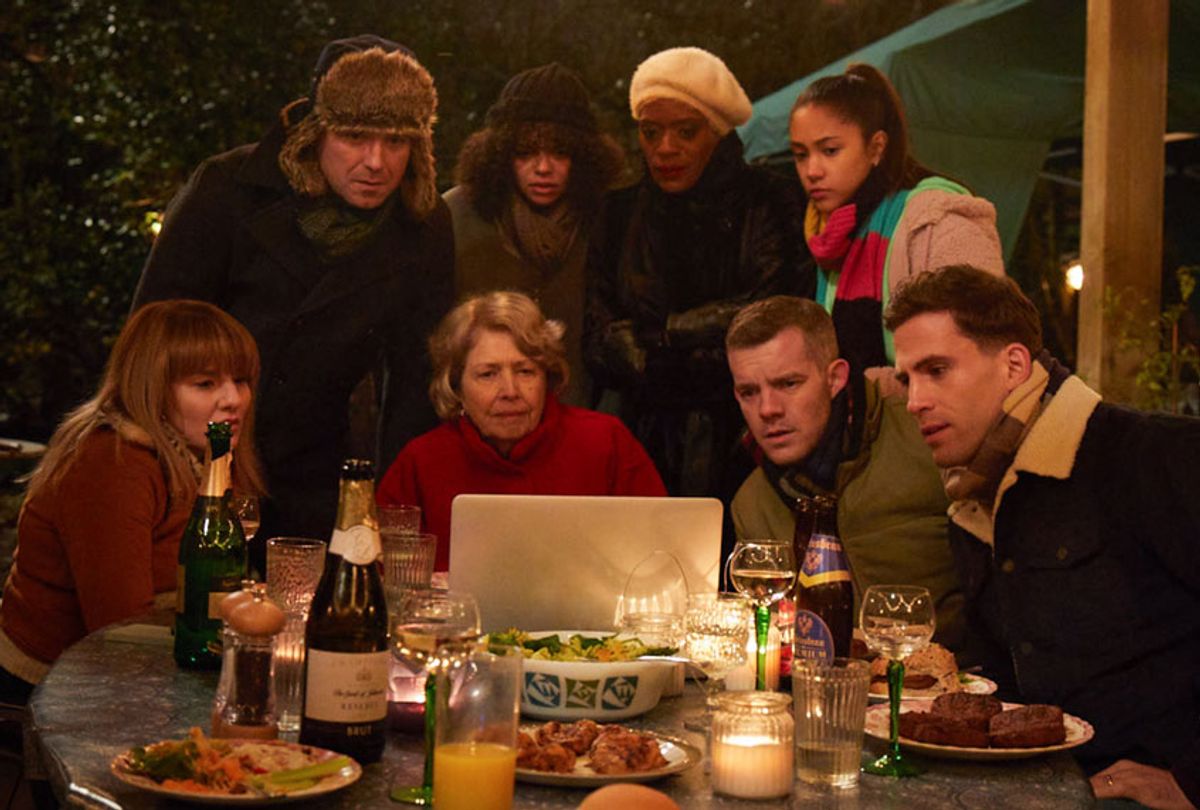 Sometimes reflecting life in one's art isn't sufficient to get your point across. Sometimes an artist has to ever-so-slightly refract it.

This is what Russell T. Davies is stealthily doing with "Years and Years," his new six-episode limited series airing Mondays at 9 p.m. on HBO. In the premiere, which re-airs Thursday at 8 p.m. and is currently streaming on HBO's VOD services, Davies introduces the Lyons, a very typical British family contending with everyday problems, conflicts and temptations in 2019.

Youngest sister Rosie (Ruth Madeley) is a wisecracking single mother who uses a wheelchair; in the opening minutes of the premiere she gives birth to the second of her two boys. Not seen through most of the premiere but frequently referred to is Edith (Jessica Hynes), the family's activist and political rabble rouser.

The Lyons siblings have very different personalities, but they're loyal to each other and regularly gather at their Gran's place (Anne Reid).

Most of the dramas playing out in the premiere are fairly mundane, even as time passes and the action moves ahead five years; with the exception of a few noticeable technological developments, 2024 does not look so different from 2019.

But we might not think too deeply about this at first, because the family expands, and an exciting new figure pops up on the TV in the form of Vivienne Rook (Emma Thompson), a wealthy businesswoman who runs for office as a political disruptor. Rook is an object of mild polarization within the family at first; most of the family dismisses her while Rosie gets on board with her brash, divisive message immediately. (Living with spina bifida makes Rosie feel the impact of economic struggle more than most of her siblings, a factor she only mentions in passing while, say, discussing the fact that a cure exists for her condition, but only for billionaires.)

Stephen and Celeste are more worried that Bethany is hiding behind a series of hologram emoji masks, while Daniel finds himself attracted to a Ukrainian refugee, Viktor (Maxim Baldry), who fled to the U.K. after Russian annexation intensifies the persecution and purging of gays and lesbians.

"Years and Years" is a gripping, highly entertaining and beautifully written family drama first and foremost. The performances are extraordinary, and though Thompson toplines the cast (and does a brilliant job as an ignorant but charismatic candidate) the largest portion of the series' success rests on the strong work of the rest of the ensemble, with Madeley's and Reid's performances producing the most sparks.

But just when we've settled into that comfort, Davies plunges the brood into a nightmare ride through 15 years of upheaval that is as brutal as it is plausible. Relationships are tested. Fortunes are reversed. The world itself transforms into something crueler than it already is.  The first episode ends in screaming, weeping and disarray as alarms sound over England. And the second?

Spoiler alert: Life goes on. Actually, this isn't much of a spoiler alert, since HBO is showing a scene from next week in its ads featuring Celeste and Bethany meeting for lunch — at a nice-looking restaurant, not over, say, a flaming garbage can while on the run from cyborgs.

Davies, the man who marshaled "Doctor Who" through its unforgettable David Tennant years, ruminated on the concept for "Years and Years" for nearly two decades. But he consciously chooses 2019 as a launching point in order to walk us down an all-too-possible turn of events that could take our current geopolitical reality to a very plausible worst-case scenario — or, more accurately, a worst case scenario for anyone concerned about the rise of extremist politics and climate change.

Part of the point Davies may be making here is that dystopia doesn't have to resemble insane scenarios like those depicted in "Black Mirror," "Children of Men" or "Snowpiercer."  The Lyons still gather at Gran's for dinner, tea, some bickering and occasional sympathy.  For the most part they take adverse developments in stride, until debacles previously believed to be someone else's terrible time slam into their midst like bricks through the window.

Watching "Years and Years" brings to mind an article published on January 9, 2017 by Thomas Pepinsky, an associate professor of government at Cornell University, in which he dared to characterize life in authoritarian states as "boring and mostly tolerable."

The headline alone was enough to turn off readers who accused Pepinsky of engaging in terrible spin, of being blind to the suffering of poor people living under autocratic rule, or of peddling hyperbole.

But those who actually read the piece to the end may have understood what Pepinsky was attempting to do, which was to issue a warning to Americans 11 days prior to Donald Trump's inauguration. Real authoritarianism, he and others argue, does not arrive on a wave of jackbooted thugs marching down neighborhood streets. It happens by degrees.

It's a gradual process that people aren't alarmed by until you wake up one day and you realize, "Oh, we don't live in the country that once we lived in before." Not my observation, by the way. Trevor Noah said that.

And in "Years and Years," Davies depicts the end result of ignoring all those alarms.

Viewing it in the context of current debates surrounding today's miseries, actually, is equally fascinating and disconcerting.

Like the characters in Davies' series, the majority of Americans would rather not argue over whether the overcrowded facilities on our Southern border denying migrant children access to adequate food, medical treatment and hygiene are detainment centers or concentration camps. Outdoor temperatures are climbing at a frightening clip, but that's why we have air conditioners. Politicians can strip away our rights, but what does it matter as long as it doesn't disturb Sunday dinner?

In short, most Americans prefer to tune out all things unpleasant. And this is why the Lyons are utterly relatable.

At one point Viktor urges Edith to talk about the fact that the North Pole is, in this near future, entirely melted. "Well, yes, I could. But I did. There's not much point anymore," she says, reminding her family that for years and years activists warned humanity that it has 10 more years to sort out climate change, and after several decades of that, time has run out.

However, evidenced by them having that conversation — over a table laden with food, I should add — humanity has not suddenly blinked out. We don't see people in distant lands being broiled by climbing temperatures or starving. And as the Lyons muddle through their personal dramas, polite society slides downward. The chilling if softly spoken theme of "Years and Years" is that the line between reality and what we define as a dystopia is about the breadth of a hair, and has less to do with digital incursions than entirely analog human flaws ranging from denial to cruelty and apathy.

And yet, it is decidedly a family drama led by emotionally complex characters simply trying to get through the day. Whatever grand shifts occur are depicted in the context of how they impact this "average" British family. And maybe the viewer might notice that the much-devolved social state depicted in "Years and Years" looks fairly navigable by current standards.

Dystopia is a classic of genre fiction, but Davies' approach differs because the Lyons family is utterly average and middle class — or at best, upper middle class. They have a few technological comforts, such as an in-home artificial intelligence-driven virtual assistant Signor, the show's stand in for Apple's Siri or Amazon's Alexa. Aside from this, and the tech-obsessed Bethany's VR-toys, the family's day-to-day life is very recognizable, in 2019, 2024 and beyond.

So too is Emma Thompson's outrageously familiar Vivienne Rook. The choice to cast Thompson in a role that's equally Trumpian and Brexit-like is a smart one: Her face is instantly recognizable to most, therefore pulling the viewers' attention as the star of a show that's not actually about her.

Rook, or Viv as she's popularly known, has no government experience, solutions or — as one debate shows — working knowledge of how the world's economy functions. But she has something better: enough cash to buy her own news stream and an expertise in exploiting fear and anger. Thus she emerges as the star of British life and a major player in the Western world's fortunes, placing her at the center of the Lyons' family's life in ways they could not have predicted.

"The fantasy of authoritarianism distracts Americans from the mundane ways in which the mechanisms of political competition and checks and balances can erode," Pepinsky argues. "Democracy has not survived because the alternatives are acutely horrible, and if it ends, it will not end in a bang."

The less than subtle message of "Years and Years" agrees with this by presenting something infinitely more alarming: the notion that if and when it does, many of us won't notice as long as there's still a table to gather around and small problems to bicker about — such Gran's off-handed observation that chocolate, for whatever reason, has become impossible to find. As long as that's the worst of their worries then, as Edith puts it, sod it all.