When is a mother good enough?

We all perform motherhood in front of other mothers. But in my role, I have to pass judgment on the performance 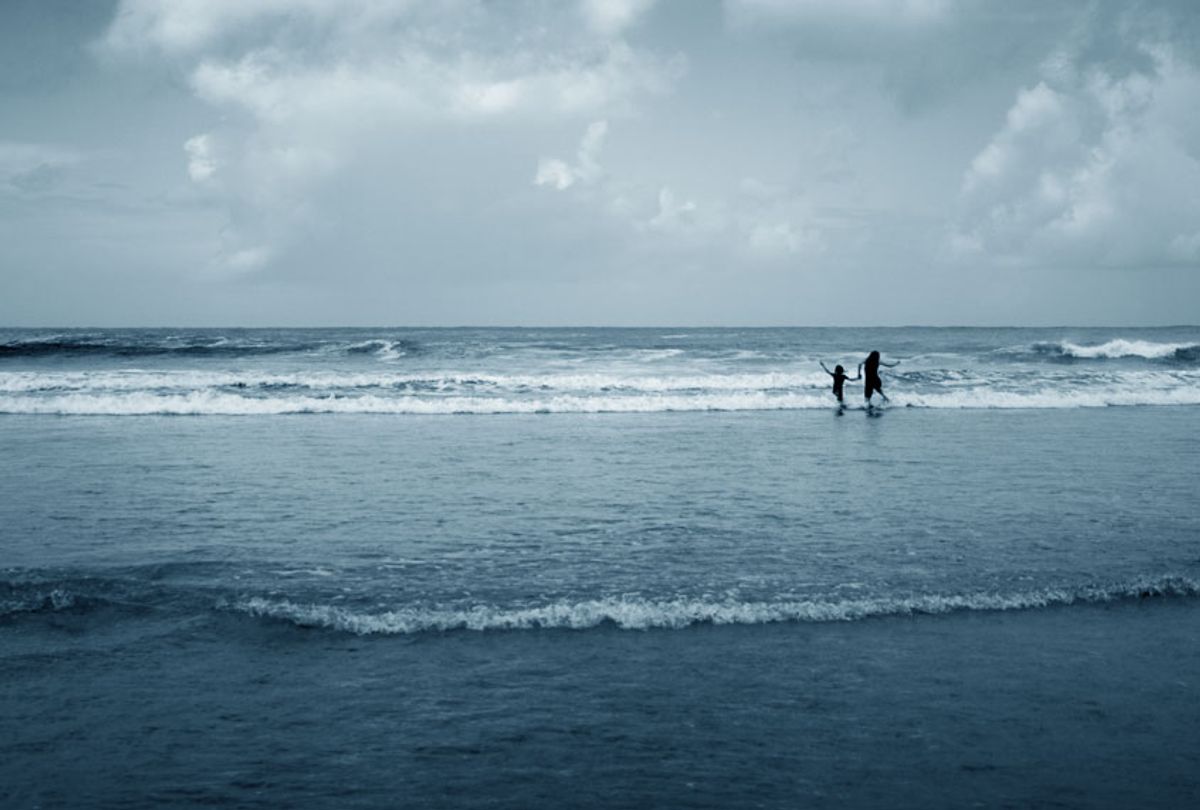 Excerpted from "The Not Good Enough Mother" by Sharon Lamb, (Beacon Press, 2019). Reprinted with permission by Beacon Press.

“We’re going to the beach!” Ridley yelled out when she saw me. Thin and jittery, she approached, then retreated, then approached again, meeting my eyes. She was yards away from her mother, who stood constrained with a fierce smile carved into a flat face. This mother had been clean for six months and wanted her daughter back. Standing next to Ridley was their DCF social worker, who seemed to approve of this plan.

A walk to a beach for an observation visit isn’t too unusual. Outings give me a chance to evaluate a mother’s ability to plan ahead. And planning ahead is one of those things mothers are supposed to do. Before visits, the mothers’ social workers advise them to be sure to provide food and other necessities their child might need during visit time. I can then evaluate how well this coaching has worked. Does a mother remember the diapers and wipes for an infant? For a toddler, a bottle and a hat to shield his lovely tender head from the sun? For an older child, water, snacks, and a few toys? No mother remembers everything, but given the importance of the visit, the performance of being a competent mother who remembers everything is what’s required.

When I require mothers to have one of their visits at my office, for a second observation, after having observed them at their usual place, they typically arrive with big backpacks and floppy, overflowing shopping bags. Children who are used to the visit routine hug their mothers quickly and then dive into the bags as if it were Christmas morning. Will there be a present or a favorite snack? I have seen a child collapse on my office floor in disappointment when a snack she had asked for wasn’t there. I recall another child obsessing for the entire visit about the promised snack that did not arrive.

“How many times have I told you to bring the white cheddar cheese Cheez-Its? You never listen!”

“But they didn’t have any at the gas station on the corner.”

“You should have gone shopping on the way!” one child wailed and hit his mother on the chest. Having had to plan for himself in the past when under her care, he may have become a better planner than she ever was, whether or not he had the ability to carry out the tasks.

“Ridley, this woman is here to watch us be together!”

Ridley was already in the house, looking in the refrigerator to see what was there. “Cheese sticks! Good. You did good, Mom.”

They packed the cheese sticks in the cooler and the four of us left. As we walked to the beach, Ridley and her mother skipped ahead swinging the cooler between them. Mom had packed towels, water, and suntan lotion. Nice planning, I thought. I, on the other hand, had none of those but, preserving a boundary, I didn’t want to ask to borrow anything, even later on the walk when I felt my nose starting to burn.

When the lake was in sight, Mom ran into the water splashing sparkles of water up around her like a silver aura. As the water got deeper, she switched to swimming, moving far away from all of us to the deep end of the swimming area marked by a three-sided dock. We watched her swim beyond earshot until she reached a dock and, holding onto its edge, waved to the three of us on land. Ridley stood at the shoreline in her baggy bathing suit, like a lonely figure watching a boat disappearing on the horizon. She dipped one toe in and withdrew it. Then she entered the water, step by step, letting the chill come and then diminish on each vertical inch of her body, until she was neck deep.

How could I do my observation, sitting on the beach, so far away? It was a challenge to interpret what might have been their particular mother-daughter dance: Ridley taking her time, Mom enticingly waiting with sparkles and joy in the deep end. Was I wrong to expect what I would have preferred to see? More encouragement for the hesitant little girl who did seem, without encouragement, to know exactly the way she wanted to approach the water and was doing so?

Mothers must perform for me. They must perform the roles of “encouraging mother,” “helpful mother,” “patient mother,” “authoritative mother.” What kind of mother, during her performance of motherhood, would swim away from her daughter and enjoy herself all alone in the deep, her feet now up in the air as she attempted a handstand. A fun mother? Her long braids were dripping wet down each side of her bathing suit. She had come to the beach to play.

We all perform motherhood in front of other mothers. As my own mother would adopt a certain attitude of restraint around other mothers, I, too, learned to look as if I were under control when I was insecure, giving other mothers my child-psychologist tips on infant sleeping or making insightful remarks about the uniqueness of another mother’s child. Underneath, I confess, there was envy, judgment, admiration, but also sympathy, all of it.

Ridley was finally in the deep, holding onto the dock. I rolled up my linen pants to above my knees and waded in so that I might hear the two of them talk, leaving my notepad and pen on the towel. It would look strange for me to stand in the water, in front of all the mothers and children there that day, taking notes. I tried to be discreet but had to yell, “Can you come in a little closer to shore?” They were in a huddle, bobbing in the water, heads together as if plotting their escape. I waited and shouted again. Mother swam over to me to let me know that it was better for me to observe them from afar without hearing them. She explained that it would be to my advantage to obtain a different perspective than most observations, a better perspective by just watching and not hearing. Then she abruptly turned, raised one arm high, and brought it down in a superior crawl she beautifully executed back to Ridley.

I chatted with the social worker on the sand while keeping an eye on the pantomime. When Mom and Ridley finally came back on the beach, Mom spread out their picnic lunch. I hadn’t brought anything for myself. I watched them eat their cheese sticks and ham sandwiches and then take turns burying each other in the sand. Mother’s inclination to keep her child from me, far off in the water or buried in the sand, was a good one.

What do they matter anyway, these little moments about food, about encouragement, about listening when a child is upset? What do they matter to the whole of motherhood? No mother has the right food for the child all the time—God, the lunchbox items my kids tossed away. No mother always praises her child—I recall a time Willy showed me a drawing and I stared at it blankly, my mind elsewhere, until he said, “Don’t you like it?” No mother listens to her child whenever he speaks—“Mom, Mom, Mom”—I can conjure that plaintive impatient cry that occurred whenever I was on the phone. These observations mean nothing on their own.

I put down my paper and pen, closed my eyes, and rested my head on my handbag that was substituting for the towel I didn’t have. F**k being prepared. What mother could ever be prepared enough for what her children bring her?

“Sharon, come find me! Come find me!” I opened my eyes and looked over and saw Ridley’s head emerging from a sand tomb. “Cara, come take a picture of me on your phone!” Ridley wanted to include us in the circle. When Cara, the social worker supervising the visit, had taken a few photos, Ridley asked her to send them to her foster mother, Diane. Another mother to include.

I remembered what it was like as a child to be buried in the sand, of that first panicky moment of not being able to budge, not knowing if I would ever get out, and then finding that moving a finger made a small crack in the cocoon. I remembered burying my own children and their directing me, “More here,” “Get my toe over there.” How trusting and intimate an act. What did it mean that Ridley brought to the experience three other caregivers: me, her social worker, and her foster mother. Did this make her feel more secure? Was it a way of reassuring herself that she would be seen, even when her mother tries to take her away to the deep end or capture her in the sand. Does she want to know, after all the years in foster care, if she goes back to live with her mother that the rest of us will still be here? Is she saying, if so, will I be safe?

At home, when the lunch not eaten at the beach was laid on the table with some extras, Ridley cried out in disgust, “I had that last time! You’re a terrible mother.” Her mother stared blankly. It was clear she didn’t know how to respond to such strong and unexpected disappointment, her daughter proclaiming her worst fear, that she was a terrible mother. She knew how to play with Ridley, but it didn’t seem to be part of her repertoire to enforce a silly rule that so many mothers enforce: “Eat your lunch. That’s what we’re having” or “Those words are unkind. Apologize and then eat your lunch.”

What might I have done? I probably would have looked through the cabinets to find something different to make. I would have taken the kinder rather than the stricter route. I might have rolled my eyes and mocked my child saying, “Yes, I’m such a terrible, terrible mother because I served the same lunch twice!” But a performance of motherhood means setting limits, and Ridley’s mother stood still, not knowing what to do.

There is sometimes a moment when a mother wants to look at me or her social worker and just ask us, “What should I do? What is the right thing to do? You must know. I don’t know what I’m expected to do.” This can come in a moment when a mother would normally have yelled at a child or removed the plate and said, “Go ahead and starve then!” But a smart mother knows that during a performance, those responses won’t do.

Ridley rescued her mother from the deep end and took a bite. And about halfway through the sandwich, she got up and went to her mother and kissed her on the cheek. She then began singing a little Disney song to herself, from the movie "Frozen": “Let it go.”

Sharon Lamb is the author of "The Not Good Enough Mother" (Beacon Press) and a professor of counseling psychology at UMass Boston.