"The grief of miscarriage can last forever": A conversation with "Brink of Being" author Julia Bueno 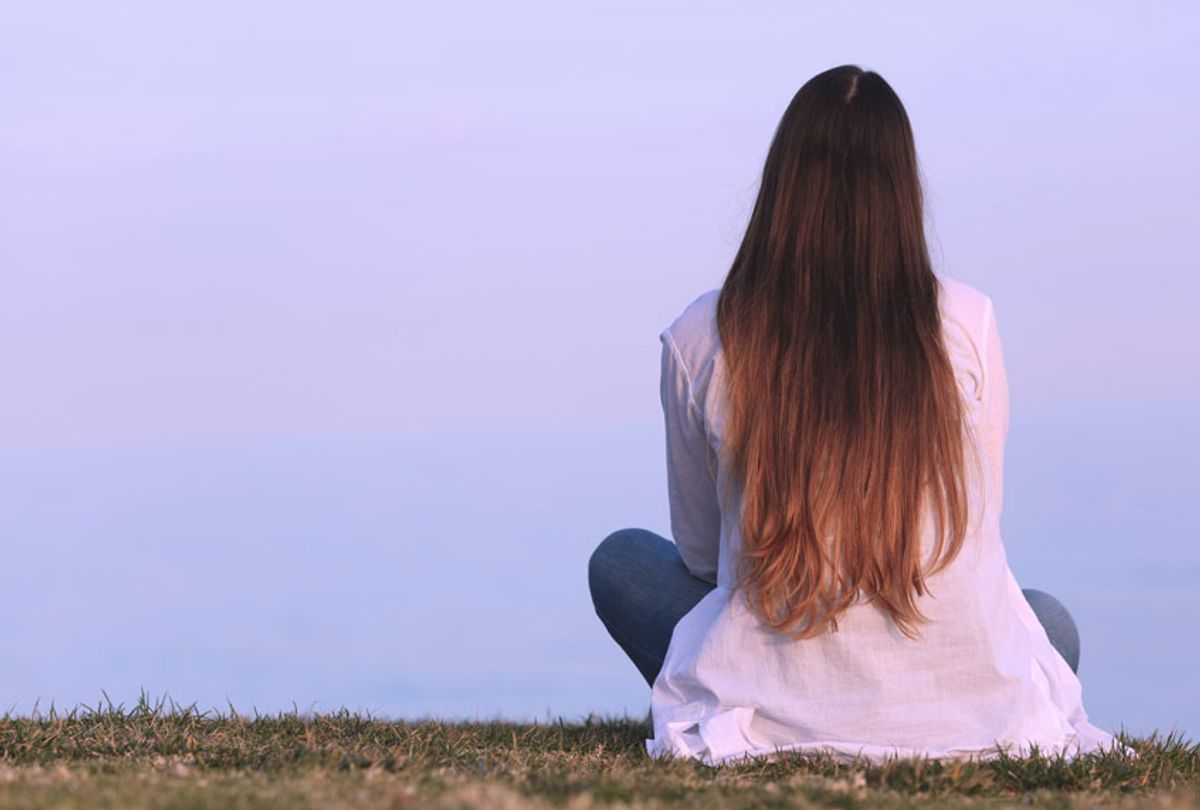 Julia Bueno's new book "The Brink of Being: Talking About Miscarriage,"(A Penguin Original, available now) blends her own stories of pregnancy loss and those of others with research to create "the first comprehensive portrait of the psychological, emotional, medical, and cultural aspects of miscarriage."

Bueno is a psychotherapist who specializes in working with women who have experienced pregnancy loss or struggled to conceive. Her writing has been published in The Times (UK), Express, Therapy Today, and welldoing.org, among others. She lives in London with her husband and two sons.

Most people, without really understanding, want you to get over the miscarriage, when honestly, it is not something you can get over. I had a miscarriage at nearly 4 months, and that was 25 years ago and I still consider that my first child. Can you talk about that here a little, please?

Firstly, I’m so sorry to hear about your miscarriage. To hear you describe your pregnancy as one carrying ‘your first child’ tells me how profound the bond you had with it — which is exactly what many people don’t understand. I agree that many assume a miscarriage can be easily ‘got over’, although I’m never sure what this means in the context of grieving. We resist thinking that a miscarriage could be in the same realm of other human deaths.

I think we tend to relate to the existence of a ‘baby’ or ‘child’ as the gestational weeks progress, and there’s a tenacious cultural idea that a baby ‘doesn’t really count’ in the early weeks, when a miscarriage is most likely to happen. My first chapter explores the bond that can be forged between a pregnant woman and her unborn — maybe even before it has been conceived. I try hard not to arrange any pecking order of grief between a late miscarriage and an early miscarriage, and I also talk about the profound grief arising from failed IVF cycles — or being unable to conceive at all.

I think people also recoil from thinking about a baby before it looks like one — we’re squeamish about our embryonic bodies, along with blood and tissues and other female excretions. In my own personal experience, people were far more willing to approach, and condole, my first, late miscarriage of twins than my other earlier miscarriages — I think it was much to do with being able to conceptualize those two babies as ‘babies’: they were somehow ‘in the world’ more.

People are also ignorant of the truly visceral experience of a miscarriage, that may cause excruciating pain and may even last for days or weeks. It’s rare that I’ve heard it described as a ‘heavy period’, which others can often assume.

How difficult was it for you to write this book?

At times it felt impossible, for three main reasons. One, the predictable debut author angst of ‘this is utter rubbish’, ‘my editor is going to pull this any moment’. Two, I felt an enormous, and sometimes crushing, weight of responsibility to reflect the experiences of miscarrying women appropriately, fairly, and compassionately. I was terrified of ‘getting it wrong’. I’m not an academic, and I needed confidence to approach the research literature in the way that I did — and this confidence often evaporated.

But also, writing and thinking about my own experiences of loss was, and still is, very painful. And as the book took many drafts to complete, I had to revisit them over and over again. I hope to convey that the grief of miscarriage can last forever — just as other griefs can — and this certainly applies to me. As you say above, it’s not something that can always be ‘got over’. I also write about the near universal experience of women’s guilt toward their miscarriage – we can be fantastically creative in finding ourselves to blame — and I was forced to bathe in my own. In particular, I feel still shame — a feeling far deeper than guilt — for not seeing, or holding, my first two babies and for flushing two others away.

In your first chapter you talk about how you hid your miscarriages from patients, not wanting to intrude, but now you feel that it could be helpful — something I absolutely agree with. Do you think also that it isn’t enough for just women to talk about miscarriage, but the men in their lives must talk about it as well?

If the men want to. I don’t think anyone should talk about their miscarriages unless they want to. Nor do I think that any woman, or man, should feel a pressure to be grieving — or talking about the experience — if the feelings aren’t there. For some women, a miscarriage can be experienced as a ‘blip’ in their reproductive life. I talk about my mother who had three early miscarriages and can’t account for the fact that two didn’t hit her hard at all, but one completely floored her. She only wanted to talk about the latter and still feels deeply about it.

But back to men. In my fifth chapter I look at the cultural pressures upon men to ‘be strong’ and ‘stoic’ and to shelve their emotional vulnerabilities generally. This plays out in the realm of our reproductive lives too, where men are expected to be ‘virile’ and emotionally robust — with a tenacious idea of ‘job done’ after conception. They are then expected to go on and support and protect their partners through pregnancy and birth, leaving the emotional burden to the pregnant partner. But such ideas stack up to create a deep disservice to many men.

Of course men can never go through the bodily experience of pregnancy (although rarely, some have symptoms), nor the visceral bind between a growing baby and their body systems — but, many men DO bond with their child-to-be in equally profound ways to women. They should be allowed to talk about this, without being patronized or ‘endeared’, and it’s incumbent on all of us to make the space that encourages this more curious, and open response. So while yes, I wish men would take the step to talk more, so as to normalize and to support each other’s vulnerabilities around reproductive loss, we should realize that they are up against it in many ways.

You’ve used the word baby rather than fetus. To me, I always felt a woman becomes a mother twice, the first time when she wants and names and claims what is growing inside of her, the second when she gives birth. No judgment on my part —we have a relationship with our unborn IF we want it. Have you found that pro-life and pro-choice groups are open to considering this? And do you ever see them reaching any sort of common ground?

I set out at the start of my book that I consciously use the word ‘baby’ as it’s the word I hear most when I talk to women after miscarriage. But as you say, this is because the women I write about have ‘wanted and claimed’ what is growing in their wombs, and maybe named it too. But not all women experience their pregnancies this way and I hope to make space in my book for these women too. Miscarriage can be an emotionally grueling experience even if we don’t have a relationship with our unborn — partly because it can be an agonizing, and even shocking, bodily experience.

It’s interesting that you mention abortion politics. My sense is that that they are foregrounded in the U.S. in a way I don’t experience in the UK. I quote the work of Linda Layne who asks this question (I paraphrase) : if we accept the loss of a baby in a miscarriage, do we let our pro-choice values down? But as you have asserted, and I write about, a ‘baby’ in its embryonic stages is a woman’s call, and hers alone.

When I spoke to friends and colleagues about my concerns that my book could shore up pro-life arguments, they were often completely baffled. They just didn’t understand the point I was making. Like me, they see a woman’s grief as a response to a relationship with their child to be of their making. We think nothing of supporting a woman through a miscarriage one day, and then accompanying another to an abortion clinic the next day. Pro-life politics in Britain (not the United Kingdom, as abortion is a live and contentious issue in Northern Ireland) doesn’t dialogue with pregnancy loss communities, nor are they interested in reaching a common ground. I can’t speak for the U.S.

I was interested in your talking about employment issues. As someone who considered a lawsuit when the company I was working with not only divulged my miscarriage at 3 ½ months, but mocked me for it, I feel that guidelines for this should not only be firmly in place, but should be discussed in the open. Do you think that is going to happen?

I was sickened when I read this. No wonder you considered a lawsuit, that behavior is despicable and I’m so very sorry to hear you went through that, on top of all else.

My sense is that in Britain at least, employers are becoming increasingly attuned to the stresses, and grief, and indeed possible mental health issues that are in response to infertility and pregnancy loss. Of course this varies wildly and I still hear contradictory stories — from bosses who give plenty of time off and consideration when a woman returns, to those who convey irritation at any time being taken off at all. But I think we are edging slowly in the right direction.

In my fourth chapter I write about the tension aroused by miscarriages becoming a pregnancy ‘revealed’ — employers become alerted to the fact that another pregnancy may well follow and this can threaten women’s positions in the workplace. I’ve known heavily pregnant women to hide their pregnancies under big clothes until the very last moment possible so as not to sabotage their position.

Often I hear of supportive responses from an employer, or Human Resources staffer, when they have experienced reproductive loss themselves. But this goes back to the point that as things stand, those ‘in the know’ seem to be the best placed to offer support — but we should ALL be in the know, regardless of our experiences.

What question didn’t I ask that I should have?

Your questions spring from your experiences, and it seems that you are also one of countless women who have an important story to tell about their miscarriage. My book hopes to encourage the more telling, and thinking about miscarriage stories so as, to eventually reach a parity with other ‘successful’ pregnancy stories that result in a live birth.

One theme you haven’t touched upon, that bothers me, is the added layer of discomfort we seem to have around memory-making. If we are lucky enough to be met with compassion and empathy after miscarriage, ie it’s NOT something to be ‘just got over’, we are extra lucky to be met with an understanding and desire for participation in a ceremony, or other memory-making ritual. In my final chapter, I explore this — and tease out how memory-making gets bound up with the necessary consciousness-raising and protesting.