Seeing this as a threat to American patriotism, or perhaps more accurately, to conservative identity, is absurd 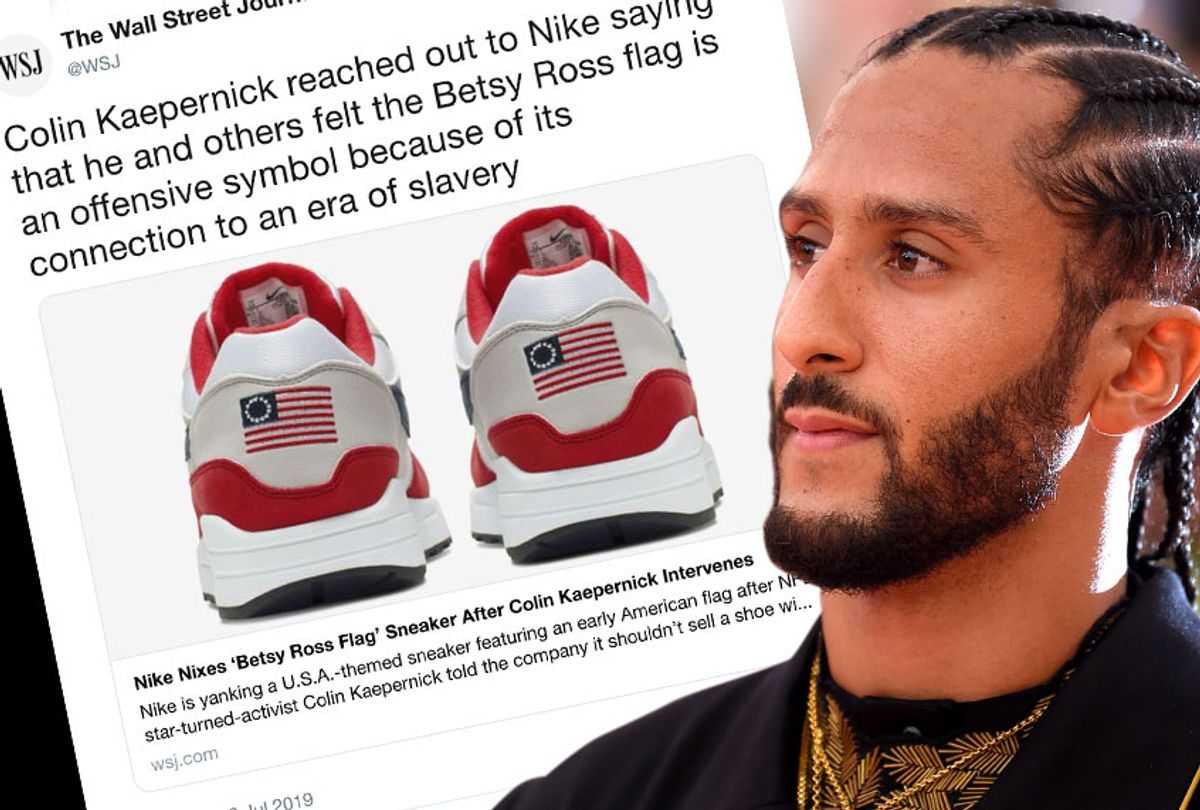 Many prominent conservative thinkers, writers, and politicians have expressed their outrage this week about Nike’s decision not to sell a shoe it had originally designed with an image of the so-called “Betsy Ross flag,” an older version of the American flag with 13 stars arranged in a circle, representing the original 13 colonies. What made this decision particularly explosive, it seems, is that Nike made this decision after hearing from NFL star and activist Colin Kaepernick. He partnered with the company after sparking controversy for refusing to kneel during the national anthem at football games in protest of racism, and the Wall Street Journal reported Monday that he told Nike “it shouldn’t sell a shoe with a symbol that he and others consider offensive.”

Cue the overwrought fulmination from the right wing.

Arizona Governor Doug Ducey started early by injecting his absurdly excessive reactions, saying, “Words cannot express my disappointment at this terrible decision. I am embarrassed for Nike.” And Rep. Liz Cheney (R-WY), chimed in as well,  saying the “decision to cancel Betsy Ross shoe is ridiculous.” Sen. Ted Cruz (R-TX) made a comment that I still haven’t entirely deciphered yet:

Naturally, a boycott was triggered by conservatives now calling on people not to buy Nike shoes because Nike decided not to sell a particular kind of shoe. No word yet on whether boycotts are coming for every other company not selling items with the Betsy Ross flag on them.

And it wasn’t just politicians looking to pander to right-wing outrage. Fox News, Breitbart, Twitchy, and other conservative outlets got in on the controversy. When presidential candidate Beto O’Rourke made a mild comment about having “respect” for Nike’s decision, Daily Wire Editor-in-Chief Ben Shapiro said, “I hope every Democrat candidate jumps on this idiotic bandwagon,” suggesting that this controversy might have an impact on the 2020 election. (It won’t.)

My intention isn’t to defend Nike’s decision. I don’t really have much to say about a shoemakers’ decision not to sell a shoe. While symbols are important and matter in society, the more interesting fact about the whole affair is that the right wing ate the story up.

Conservative writer Bret Stephens at the New York Times placed the incident in a list of other bizarre controversies that soaked up far more oxygen than they ever deserved, saying that it showed a capitulation to “Woke culture.” He argued that such incidents somehow show a troubling trend in American society. “The story has resonated widely not because it’s outrageous, but because it’s predictable,” he said.

In other words, it played into the pre-existing narrative that conservatives have cooked up to inflame the masses.

Meanwhile, if you look at the issue that has outraged Democratic leaders and voters in recent weeks, you’d find that they’re focused on the abuse and treatment of immigrants held in abusive conditions by the Trump administration. Of course, the right wing thinks these complaints are overblown or misplaced, but they are about actual human being suffering at the hands of the administration. The Department of Homeland Security’s inspector general has even found that Custom and Border Patrol’s treatment of migrants actually violates its own standards and policies.

But the right wing is concerned with shoes that were never even sold in the first place.

It’s not that every issue that grips the public and the commentariat’s attention has to be the most pressing issue of the day. But it should be at least about something. And yet the Betsy Ross flag isn’t being banned, and nobody is being punished for wearing it or displaying it. No one is even burning it(!). A company simply made a decision that, on reflection, it wanted to avoid sending a message that it worried might be misinterpreted. Cautious companies make these decisions all the time.

Seeing this as a threat to American patriotism, or perhaps more accurately, to conservative identity, is just absurd. It’s reminiscent of the entirely incomprehensible debates about Starbucks holiday cups, which some see as part of the imaginary “War on Christmas.”

But prominent figures on the right love to stir up these controversies over non-events because they know their base and viewers are so easily riled. They display the traits they say they most despise among liberals and Democrats: oversensitivity, excessive attention to trivia, overblown outrage. They were the “snowflakes” all along.

And yet while the controversy itself doesn’t matter, it’s grip over the conservative mind does. It reveals how the movement’s ideology distracts from issues that matter — inequality, poverty, racism, environmental degradation, corruption — and encourages its followers to waste their energies on irrelevancies. It convinces right-wing voters that their identity is under attack by liberals, the elite, the media (but not conservative media), so that they don’t care when these groups expose and draw attention to the actual dangers of unregulated industry or the abuses of immigrants at the border. The migrants, after all, aren’t the real victims; the real victims are the people who don’t get to wear Betsy Ross flag shoes.