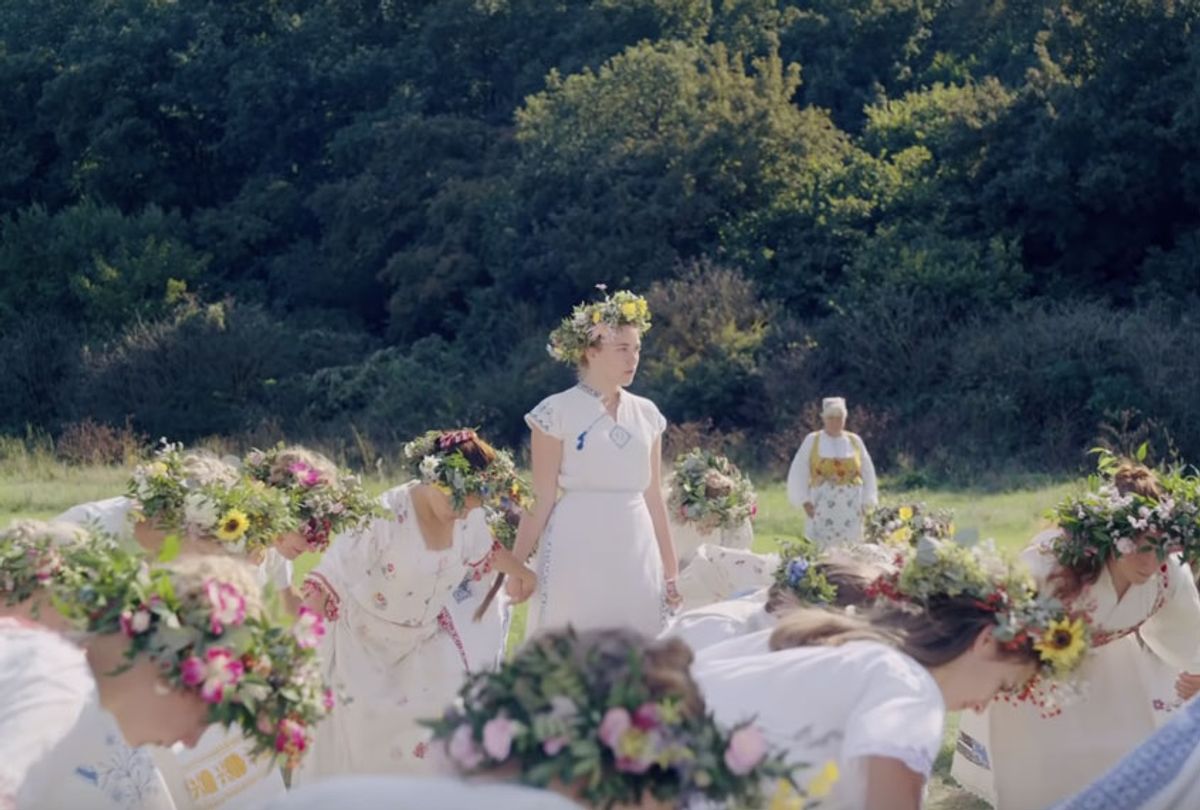 [Editor’s note: The following post contains spoilers for the ending of “Midsommar.”]

In an interview with USA Today, Pugh and director Aster get into a minor disagreement over the specifics of the film’s last twist. Pugh said she played the scene as if Dani had a full mental break following her discovery of Christian’s infidelity. As Christian is prepared for the sacrifice and then burned alive in the yellow temple, Pugh said Dani is so far gone that she doesn’t even realize the details of what’s happening.

“I thought it would be so interesting to have the love of her life in the building and she’s a kid looking at a firework,” Pugh said. “That’s how I imagined it, saying, ‘This is someone that’s completely gone now. She doesn’t realize what’s going on, and she’s just really happy the fire is going up.’ So when we shot it, that’s what I was trying to get at.”

“That’s what made the ending possible [for me],” the actress continued. “I don’t think I would’ve supported Dani as much if she knew that he was in there. I don’t think anybody is that sinister. You’re not going to watch your boyfriend cheat and be like, ‘Burn!’ I know Christian was a bit of a [expletive], but I didn’t want her to be evil at the end.”

Read more IndieWire: Jack Reynor Embraces 'Midsommar' Full Frontal Male Nudity: 'I Wanted As Much As We Could Go For'

Aster doesn’t quite agree with Pugh’s assessment. “I wouldn’t agree with there ever being an iteration of the movie where she didn’t know he was burning,” the filmmaker said. “But there were a lot of scenes that were cut, and probably a few that helped illustrate she was losing her grip on her sanity, which you hopefully still see.”

Read more IndieWire: 'Stranger Things 3' Spoilers Review: We Need to Talk About Hopper (and That Ending)

“It’s also her fusing with this community,” Aster added. “She’s found people who are willing to feel what she’s feeling, and she’s able to just purge.”

Reynor told USA Today the ambiguity of the film’s ending is what he loved most. The actor pointed out that Aster doesn’t actually show Dani saying it’s Christian she wants to sacrifice, which leaves the door open to the possibility that she didn’t even get to make her choice.

“She doesn’t say anything in regard to who should be the effigy – it’s kind of understood,” Reynor said. “The nature of that leaves the question hanging over the end of the film, whether she’s actually participated in this or whether she’s a victim. Tonally, when you’re watching it, it feels like a moment of empowerment for her: the liberation of total insanity.”