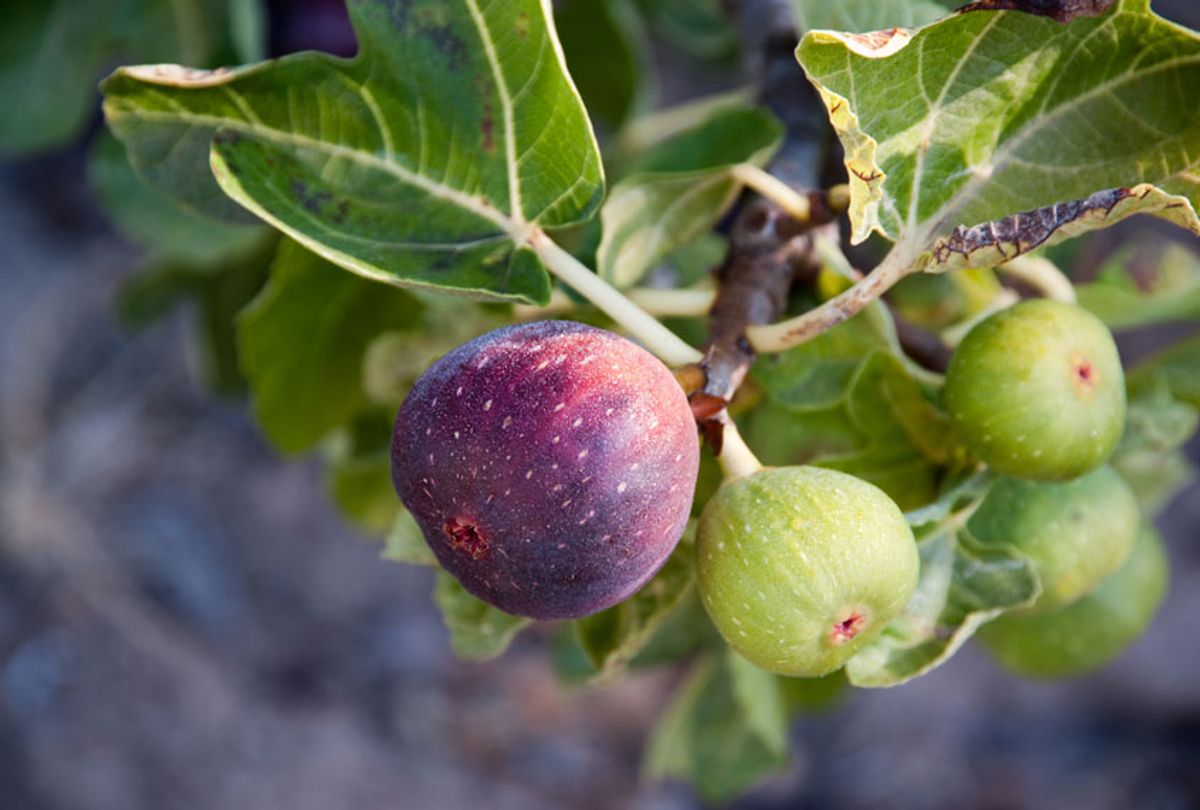 A mature fig tree grew in the sunny corner of the postage-stamp-sized back garden of the storefront apartment I rented for most of my twenties. More a bush, really, it had been planted by my landlord 25 years earlier and never pruned. This was one of the multiple reasons why, in its entire life, it had never once yielded a crop of fruit. Figs need plenty of sun and not all that much water. They're sensitive to nitrogen levels so don't respond well to fertilizer. There wasn't much danger of that, though. Before my arrival, this fig was one of the most benignly neglected still-living plants you'd ever wish to meet.

After the second season of wishful thinking failed to produce any result, I resolved to remedy the productivity fail with action. Late in the fall I cut the secondary limbs back considerably and covered the fig in eight yards of burlap and wrapped that with black plastic contractor bags. This winterizing technique is common in the boroughs of New York where Italian immigrants settled, bringing fig seeds with them. The theory is that the black plastic generated heat from the winter sun and imparts it to the burlap, insulating the tree from the coldest winter temperature dips.

I had high hopes.

All Spring I watched as the foliage came in beautifully with broad leaves and the buds appeared and then blossomed. But by August I had given up on it bearing any fruit. Staring out at that fig tree from the window in my spartan galley kitchen, I became obsessed with eating the fruit from that tree.

Figs were first domesticated in Sumarya and had spread as far as China by the 9th century BCE. Figs were part of the cuisine of Ancient Greece. Initially rough stuff largely meat-based with an over-reliance on vinegar sauces — Greek foodways were refined by the luxurious influences from their trading partner, Persia in the East and the Greek colonies of Sicily and Southern Italy to the west. By the Fourth Century BCE, the two cultures had fostered a complex and heavily perfumed, sauce-centered — but still meat-reliant — cuisine in Greece. These multi-course dinners always culminated with cakes for dessert (often followed by Symposia, some readers will recall).

Sicilian cooks produced the first known proto-cookbooks with roots in a letter-writing tradition where correspondents chronicled the fare on offer and the carrying-on at great feasts for absent friends. Just as French chefs had been revered in Europe and America during the 18th, 19th and the first three-quarters of the 20th centuries, Sicilian cooks were considered a cut above in the ancient world.

It was Archestratos, a Sicilian from the city-state Gela who put an end to the overindulgences at the Greek dinner table and is reasonably considered the founding ancestor of nouvelle cuisine. Archestratos authored the epic poem "Hedypathea" (Life of Luxury), a stinging critique of culinary excess at the hands of Sicilian professionals and the original guide for good living. Archestratos bade his exclusively well-to-do audience keep it simple in the kitchen and apparently they listened. Seek out the freshest ingredients Archestratos advised and cook them simply. Sound familiar?

Like the crankiest epicurean working today, Archestratos had strong opinions about everything. In one section of "Hedypathea" he advises his audience to traipse as far as Miletos on the western coast of Anatolia in Turkey to source the best gray mullet.

When you are in Miletos, try to buy the kephalos

for they are the best there, since that is the nature of

There are many other, fatter ones in famous Kalydon

but their belly-fat is not as fragrant

Or as pungent. But the Melesian sort, my friend,

are amazing quality. last them whole and unscaled,

but carefully, since they are tender, and serve them

Let no Syracusan or Italian

come near you as you are making this dish,

for they do not know how to prepare top quality fish

but utterly ruin them by covering them everything they cook

and sprinkling it with liquid vinegar and silphium-

For all his prognostication about the groceries, Archestratos doesn't pay much attention to recipes. One of the few methods of preparation he does offer, however, is for gray mullet (prized for its flakey, white flesh).

The western world's first published gastronomist advises wrapping fish in fig leaves and letting it roast in the embers of a waning fire and to serve it with salt alone.

I can't honestly say I knew any of that when I first started cooking with fig leaves. In a fit, I suppose, I decided if I can't eat the fruit, I'm going to eat the leaves. I start my experimentation with whole fish. Using whole fish I learned to interlock the finger-like fronds of the figleaf and create a sheet broad enough to wrap the fish. During my first few efforts I used snapper, but swapped that out for sea bream. The Bream works better because,  measured dorsal to pelvic fins, the snapper is a tall fish and requires a larger, often difficult-to-craft, web of interlocking leaves to encase the fish.

Another favored ingredient of Archestratos is silphium, an herb fabled for being even tastier than the most delicate fennel. He apparently shared a passion for Silphium with the rest of the moneyed folk in the ancient world. Silphium only grew wild in North Africa and resisted all efforts at domestication by Sicilian culinary professionals and so was ultimately imported to extinction.

I can't season the fish with silphium, so, instead, I stuff the fish cavity with grocery store fennel seasoned with salt and pepper and pan-roasted in olive oil. Me, keeping it simple in the kitchen just as Archestratos said.

If I'm not up to stuffing a whole fish I use thick fillets of any flakey white meat species. (I am confident Archestratos would not approve of this casual approach at the fishmonger.)

Prepare a grill with the coals collected on only one half. You're roasting the fish in indirect heat. That means placing it on the grill next to the embers not directly above them. Light the grill.

Weave the fig leaves atop three equal lengths of twine that are at least four inches longer than the broadest section of leaves. When the carpet is complete, place the fish in the center and season with salt and pepper and drizzle with olive oil.  Wrap the fish in the leaves being careful to patch any places where the fish is visible. Use the twine to tie the leaves tightly to the fish.

Wait until the grill is at apex heat and place the bundle of fish and fig on the cool side of the grill cover and let roast (a bream will take 15-20 minutes, a snapper a 20-25, fillets will take considerably less time than that). Before removing from the fire move the fish to the coal side of the grill just long enough to toast the fig leaves. Pay attention here. Don't walk away. The leaves are toasted when they smell toasted. Remove the fish from the grill to a serving plate, cut the twine and open the package. For maximum effect, serve on top of the leaves.

I'd been harvesting fig leaves for roasting fish and had almost forgotten about the fruit of the tree when the first bumper crop of figs came in.