Within white supremacy circles, women are expressing some of the loudest calls for white-baby making 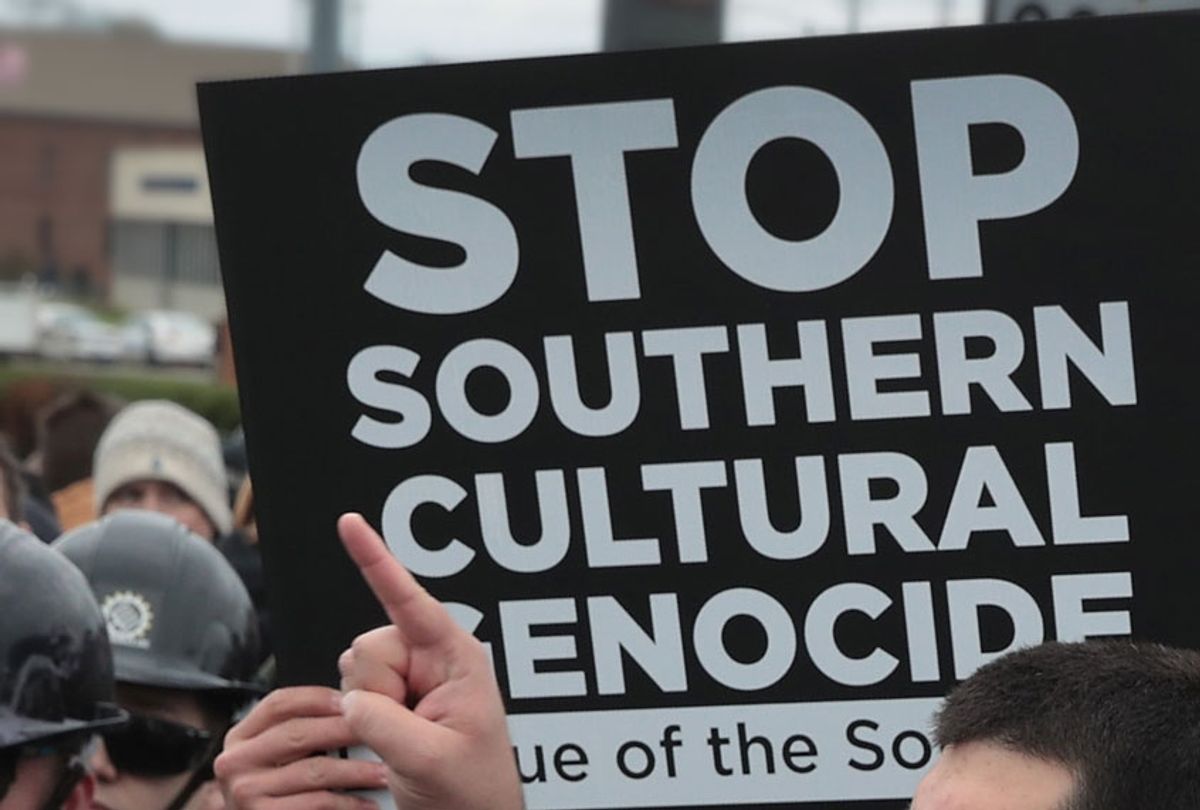 Excerpted from "Proud Boys and the White Ethnostate: How the Alt-Right is Warping the American Imagination" by Alexandra Minna Stern (Beacon Press, 2019). Reprinted with permission by Beacon Press.

If the alt-right is galvanized by one overarching narrative, it is that demographic change will reduce whites to a hated minority and eventually lead to white extinction. The alt-right frequently expounds on and alludes to the declining white birth rate and refers to concerning numbers of suicide among middle-aged white men, as well as the devastating opioid epidemic and its impact on white families. Recent surveys do show that American women of all backgrounds are having fewer babies, less than the replacement level of 2.1, mainly due to deep economic concerns like the high costs of child care.  Depending on how race and ethnicity data in the US Census is interpreted, non-Hispanic whites will constitute less than 50 percent of the population around 2050. Alt-righters weaponize census projections relying on the narrowest percentages to count whites (as non-Hispanic whites with no mixed-race identity), and thereby hype their claims of impending white genocide. These problematic projections serve the alt-right well in whipping up demographic fear, which is propagated by mainstream right-wing pundits like Laura Ingraham, Ann Coulter, and Tucker Carlson. The alt-right twists these fertility and mortality statistics away from questions of health disparities and income equality to prima facie evidence of a nearly conspiratorial campaign of white extinction.

One response to looming “white extinction anxiety” is to produce white babies—many more white babies—principally of Northern and Western European ancestry. Unlike immigration or refugee bans, forced deportations, or the reintroduction of racial segregation, which require heavy-handed policies, white nationalism can grow through procreative means, boosted by pronatalist programs. As one contributor to Counter-Currents proposes: “Having three—or five or eight—White children is probably the most ‘pro-White’ thing a person can do—and the most resistant to any charge of ‘racism.’ How about that?”

Propagating wildly does mean that alt-right men will need to convince themselves that procreation and coupling—and a likely future of vanilla sex with a wife—are enticing. This tamed path of husband and father is far afield from the erotic conquests and hook-ups prioritized in the manosphere. Greg Johnson of Counter-Currents broaches the difficulties of convincing horny and entitled 20- and 30-somethings to bite the bullet and breed. The smackdown he gives this audience focuses on the urgency of perpetuating ancestral white bloodlines: “If you are worried about having kids, or you’re not sure if it’s a good idea, or you’re not sure if you’re up to it, or you’re afraid that you’re bringing them into a terrible world, just think about all of the ancestors that you had going back to the very beginning of our race. Every one of these people probably had it harder than you.” He asks them the berating question: ”Are you going to be the whiny little maggot who brings all of their striving and struggles to oblivion because you just can’t get your act together and decide to go off the goddamn pill or stop using condoms or whatever and just take the plunge and carry the race forward one more generation?”

Appeals to ancestry abound in the alt-right, and nationalist women express some of the loudest calls for white-baby making. In 2017, Wife with a Purpose, the alt-right social media activist who chronicles her life as a proud nationalist and Mormon mother, was taken with a tweet posted by Iowa representative Steve King. Itself riffing off a tweet from the acerbic right-wing Dutch politician Geert Wilders about the threat of Muslims to the Netherlands and the foreseen demographic disappearance of whites, King aped, “We can’t restore our civilization with somebody else’s babies.” This resulted in swift condemnation and ridicule in many quarters of the mainstream media, and King himself received bemused and angry tweets from congressional colleagues, some posting photos of their smiling multiracial children. Wife with a Purpose, who asserts that “her primary duty is having children and supporting her husband,” issued a “white baby challenge,” throwing down the breeding gauntlet: “As a mother of 6, I challenge families to have as many white babies as I have contributed.” Once her challenge went viral on social media, Wife with a Purpose received much censure. Telling, however, were the thousands of comments praising and defending her on her YouTube channel: “I stand in solidarity with Ayla,” “Love This Woman!,” “She is 100% right,” and “Make White Babies Great Again!”

Red Ice’s Radio 3Fourteen, hosted by Lana Lokteff, is the most visible online arena for discussions of nationalism from a female alt-right perspective. Lokteff’s interviews and vlogs receive 10,000 to 200,00 views, depending on the topics, which range from the benefits of New Age herbs to the wonders of being a traditional wife, and from criticisms of the positive depictions of interracial couples on the mainstream media to the hazards of “migrant invasions.” Lokteff and Red Ice TV provide the online base camp for a networked public of alt-right women, who act as a chorus to demand preservation of the exalted Western civilization that their white men built. In her vlog They Want You Dead White Man! Lokteff delivers an impassioned commentary as a cascade of sensationalistic headlines flash across the screen and paint a frenzied picture of relentless attacks on white men in Europe and the United States. Lokteff reminds her viewers that straight white men are the world’s great inventors and creators and, moreover, that these tolerant and kind souls always are the ones to come to rescue the less fortunate. What would the world be like without these saviors? It would be “hell on earth,” she proclaims, behind a backdrop of film clips of brown and black people rioting and rickety boats of North African refugees. In a not-so-veiled threat, Lokteff warns that SJWs are taking political correctness and diversity campaigns “way too far, too fast,” and are “waking a sleeping giant.” Once roused, this mighty force of white saviors will take control, restore order, and reclaim Western civilization. The video weaves white male victimhood with racism through scaremongering and foregrounding the themes of imminent white genocide, the bias of the liberal media, and the fortification of the tribe. Lana praises alt-right men as “fighting for a future for women and children.” In her words, they are not “fags” but want to have sex and procreate with women.

As a home for the small but active alt-right sisterhood, Radio 3Fourteen brings together female alt-righters with their followers on social media. Regulars include Wife with a Purpose (Ayla Stewart), Bre Faucheux (before and after her online departure), Canadian white nationalists Lauren Southern and Faith Goldy, Lacey Lynn, and Blonde in the Belly of the Beast, who shares her experiences as a red-pilled anti-feminist living in the liberal bastion of Seattle. Also in the mix is TheBlondeButterMaker, who vlogs about organic recipes designed to nourish her family, including butter with pesto and bone broth, while endorsing a brand of white European paganism. The power of these alt-right women to push the Overton window and move alt-right discourse into the mainstream should not be underestimated. These are not just amicable Google chats with women with conservative leanings but virtual salons that make scorching and simplistic critiques of feminism, globalism, diversity, and multiculturalism sound urgent, sexy, and like plain old common sense to some ears. These women position themselves as the new counterculture, pitting themselves against a more backward Left. According to Lokteff, “A lot of these liberal women, they’re not risk-takers, even though they have piercings or blue hair. . . . What we do, the things we talk about, I don’t think it can get any more high-risk.” They fancy themselves alt-right handmaidens of a reinvigorated white culture and spokeswomen for their ostensibly beleaguered male defenders.

Alt-right women are traversing a tightrope, and they seem to believe it’s a sturdy one gripped firmly by their white male heroes. Yet the experiences of women like Faucheux, who unwittingly left social media under clouded circumstances and now, only with the protection of a wedding ring, can plot her return, reveals the precariousness of this balancing act. Nevertheless, any examination of the alt-right must explore the networked and affective domains of white nationalist women. As wobbly as their position may be, they inarguably are one of the movement’s greatest assets.