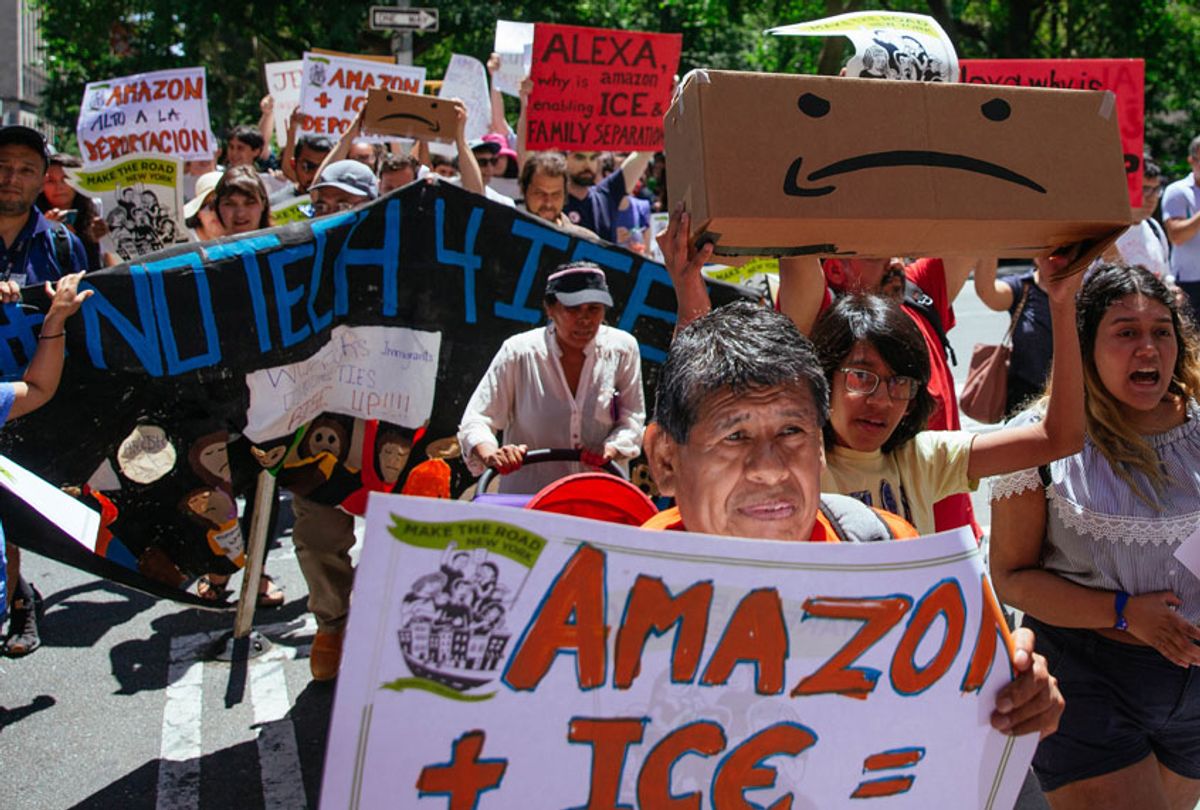 Amazon Prime Day is meant to be a two-day parade of "epic deals," according to the online retail giant. Yet some of the company's workers are celebrating the July 15 and 16 event by protesting work conditions, disrupting Amazon's celebratory PR narrative that accompanies the 2-day sale.

Activists, unions, warehouse workers, and tech workers across the country are speaking out against the company during Prime Day(s), in which Amazon is estimated to generate $6.1 billion in sales.

On Monday afternoon, a group of hundreds of protesters gathered at Madison Square Park and walked down to the street to Amazon CEO Jeff Bezos' Manhattan home. CNET reported that protesters' creative signage included "Stop Amazon-enabled surveillance of immigrant communities" and "Alexa, why is Amazon enabling ICE?!?"

"Amazon workers are sending a powerful message to Jeff Bezos this Prime Day: It's time to stop putting profits ahead of people," UFCW President Marc Perrone said in a statement. "With the recent move to one-day Prime shipping, Amazon workers are being forced to meet impossible demands at increasingly unsafe speeds."

Last week, CBS reported how some warehouse workers at a fulfillment center in Shakopee, Minnesota, were planning a work stoppage for the event.

"They try to get someone to work as hard as you can under the threat of being fired," said Tyler Hamilton, a 22-year-old who had worked at the warehouse for nearly two years. "As much as they can, they figure out ways to collect data and measure work."

An Amazon spokesperson pushed back on claims from warehouse employees, according to CNET.

"We encourage anyone to compare our pay, benefits, and workplace to other retailers and major employers in the Shakopee community and across the country — and we invite anyone to see for themselves by taking a tour of the facility," the company spokesperson said last week.

According to CNBC, the fulfillment center workers started walking out at 3 p.m. ET Monday and will strike for a six-hour period. Amazon Employees for Climate Justice said in a press release some tech employees were traveling to Minnesota to support the effort.

In this email, the group explained, according to the release: "Lending our support to our coworkers in [Minnesota] is a natural part of our climate justice priorities. We cannot create a sustainable, long-term approach to addressing the climate crisis without addressing the structural racial and economic inequities that are part of our system of extraction — of energy, material, and human labor — that has caused the crisis."