Porgy is the trash fish of the summer 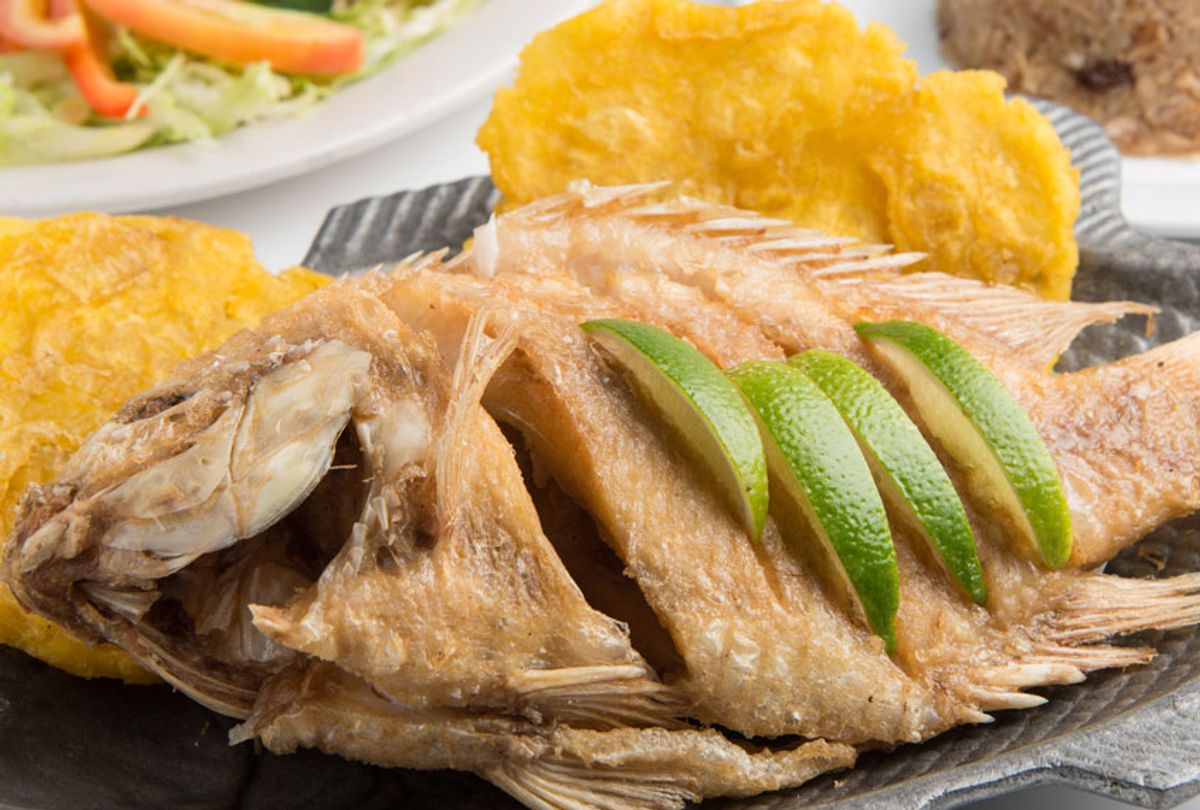 This summer, porgies are officially a thing — due in no small part to the enthusiasm of chefs like Ned Baldwin, chef-owner of Houseman in lower Manhattan, who has championed porgy among other overlooked local fish on his menu for the last few summers. I have been thinking about the ungainly panfish around dinner time for a month or so now.

I didn’t get around to preparing one until last weekend. Seasoned with salt and pepper and roasted, the meal was an unambiguous disaster. I know the rules of purchasing whole fresh fish: Look for crystal clear eyes and red gills and firm flesh with some spring in it. Choose a fishmonger whose floors you’d eat off of, and you pretty much can’t go wrong.

I did all that informed shopping at a market on the water out of which porgies spawn. I cooked the fish under a hot broiler — a broiler so hot that the cookie sheet that the porgies were on buckled and warped under the unnatural torment of the electric filament.

Still, as I carried the fish to the table, my meal fail sensors inflamed, I began my apologies. "What’s wrong?" I wondered, sitting across from my wife, who is endlessly patient with my realtime kitchen performance review. Lisa had only just reported being starving. I began the deboning project and my heart sank.

I couldn’t place it at first, but the flesh smelled like it had come from a dank dishwasher. It tasted fine, certainly not bad, but nothing was going to taste good that smelled like this. Lisa insisted that she enjoyed the meal, and once I had decided that it wasn’t dangerous to consume, I didn’t push the point. But I remained vexed through the weekend. My tastes are not narrow. I have yet to be presented with food I won’t try, and the only meal I swear I’ll never eat again is roast guinea pig. And, I suppose, even that is negotiable.

I began my recovery campaign, pestering friends and respected professionals. What’s up with porgy? What’s that smell? What am I doing wrong? All of the respondents disavowed any first-hand knowledge of an obnoxious smell. But Will Horowitz — chef/owner of Ducks Eatery and Harry & Ida’s in the East Village and something of a Bay Man out on Long Island’s North Fork where I sourced my porgy — did share that he always treated his porgies to an ice bath before cooking them. The New York Times' Food Editor, Sam Sifton, a noted porgy booster, has never had the unfortunate experience of presenting a swampy porgy at table, but he also offered that a quick brine is always a good idea.

Brining fish isn’t uncontroversial. Those shooting back may ask, why on earth would you want to add more water to fish flesh? Honestly, I don’t have an opinion. I’m just looking for answers.

So I turned, as I often do, to Bobby DeMasco, the occasionally mercurial owner of Pierless Fish Corp, one of the country’s truly great premium fish wholesalers. “Oh, is it that time again?” DeMasco asked wearily. “Every few years, some bright bulb discovers porgy.”

It’s one of the usual suspects on the trash fish appreciation circuit, he says. But porgy’s sudden popularity onset is not a bad thing, DeMasco reflects in a tone that only a man who has sold several million pounds of fish can affect.

“The first time I ever heard of porgy I was at the Fulton Fish Market. A seller cooked it for me on a George Foreman Grill,” said DeMasco, who, in the 1990s misspent his youth cooking on the line in serious restaurants like Allison on Dominick in Tribeca but wised-up and moved to Portland, Maine where he began an apprenticeship at Brown Trading Company, one of the first and best seafood wholesalers in America. “I was impressed. I said so. The seller snorted. He said, ‘white people are so dumb, we all want fish with names — it’s gotta be halibut or fluke or whatever. You see those ethnics [this was the 1980s, not as enlightened times as these DeMasco would, no doubt, allow], they’re the smart ones, they’ve been eating porgy forever. You know why? Because it’s good and it’s cheap and it’s local so it’s usually fresh.’ Pretty funny, right? All these years.”

“When I started selling them I called them 'Long Island White Sea Bream’ because nobody would buy them if they were called porgy,” recalled DeMasco. “They are in the bream family,” he added.

I shrugged and inquired after the health of the fishery. “Everybody offers porgy up as a great eating fish if you’re worried about the supply of other more mainstream species. Is that true?”

DeMasco nodded reassuringly from where he lounged behind his desk. “To tell you the truth, I don’t really know that they have a predator,” says DeMasco, turning to search on his desktop console.

“Isn’t every fish bigger than them a predator?” I ask.

“It doesn’t really work that way.”

From what we could tell from our search, humans are the only predator porgies have to worry about. That’s probably not all that comforting, considering what we're capable of when we decide we like to eat something. Still, National Marine Fisheries Service’s Northeast Fisheries Science Center rates porgy, or scup, as not overfished; as of 2016, they say, “overfishing was not occurring.” That’s as close to a clean bill of health as any fishery can get.

Most of the porgy on the market weighs about one pound, though DeMasco says he regularly sells fish as big as two pounds. They top out at four pounds. Porgy sales didn’t really spike until 2013, and then they doubled to 10.7 million pounds, where they’ve hovered ever since.

"What happened in 2013?" I ask. DeMasco shrugs and makes a gesture I take to mean everything else got really expensive.

Heat abuse is how DeMasco diagnosed my porgy. Maybe the local guy I bought it from didn’t have enough ice on his boat. “Fish doesn’t have to drop below 40 degrees for long, but once it does, not good,” he says. We were now standing in one of his refrigerated cutting rooms.

Unlikely, I reply. “I know how to buy fish. You taught me.”

DeMasco shrugs again and hands me four of the freshest porgies you could ever hope to cook. “Here. See what you can do with these.”

My next stop was the professional kitchen of Josh Eden, a veteran of the House of Vongerichten during the Alsacian’s rise to the top of the restaurant heap. Eden — who, because he is not a tall man, prefers to be called Shorty — opens or fixes restaurants for a living now. With a manic singularity of purpose, Eden builds and runs the cleanest most purpose-driven commercial kitchens I’ve seen. If, while snooping around under the various hoods and shields and behind the doors to cabinets and refrigerators in his workspaces, you comment on the startling order you find everywhere you turn, he will say flatly “I have an 'A' in the front window." The highest letter grade given by the city’s Board of Health is his starting place.

Endlessly curious and professorial in a shop class kind of way, Eden is a natural go-to if you want to figure out why the fish you cook smells bad. We immediately set to work, seasoning two fillets with cayenne pepper and salt and dredging them in flour, egg and panko and deep-frying them. “Clean,” I remarked on tasting the first.

It was. Ever so faint, and not unpleasant, but yes, if magnified, that was the beginning of it. The next two fillets we broiled, one skin side up, one skinless. The skinless fillet was odorless. The one with skin had the same sad hint of dirty dishwasher.

“I know what you did,” said Eden. Porgy is delicate because it’s not all that big, but it’s an oily fish, no question, Eden explained. You have to respect an oily fish and cook it fast under high heat or the oil takes over. You have got to be aware that the flavor gets more intense toward the bloodline, the red, almost-purple core of an oily fish. “Before I tell you what happened, we’re going to bake the whole fish with the head on. I’m going to season it with cayenne and salt and stuff it with shallots and fennel and lemon zest.”

The fish bakes quickly under the broiler and Eden breaks it open at the neck. “Just smell.”

That was it mild, not unpleasant, but the beginnings of something that could get pretty unpleasant. “You didn’t check if the gills had been removed, did you?”

Eden was right. The kid who cleaned the fish asked me how I wanted my fish cleaned, I asked him to remove the scales and gills, leave the head and fins on, but I never checked the cavity behind the jaw to confirm it had been removed.

So, yeah, I’d eat a porgy again. In fact, I’m grilling another one of DeMasco’s as soon as I file this story. But I’ll never fail to check the gill cavity on another fish as long as I live.