Whose country is this? America and the immigrant experience are intrinsically linked

As a nation shaped by immigration, our brightest hope for the future lies in the lessons from the past 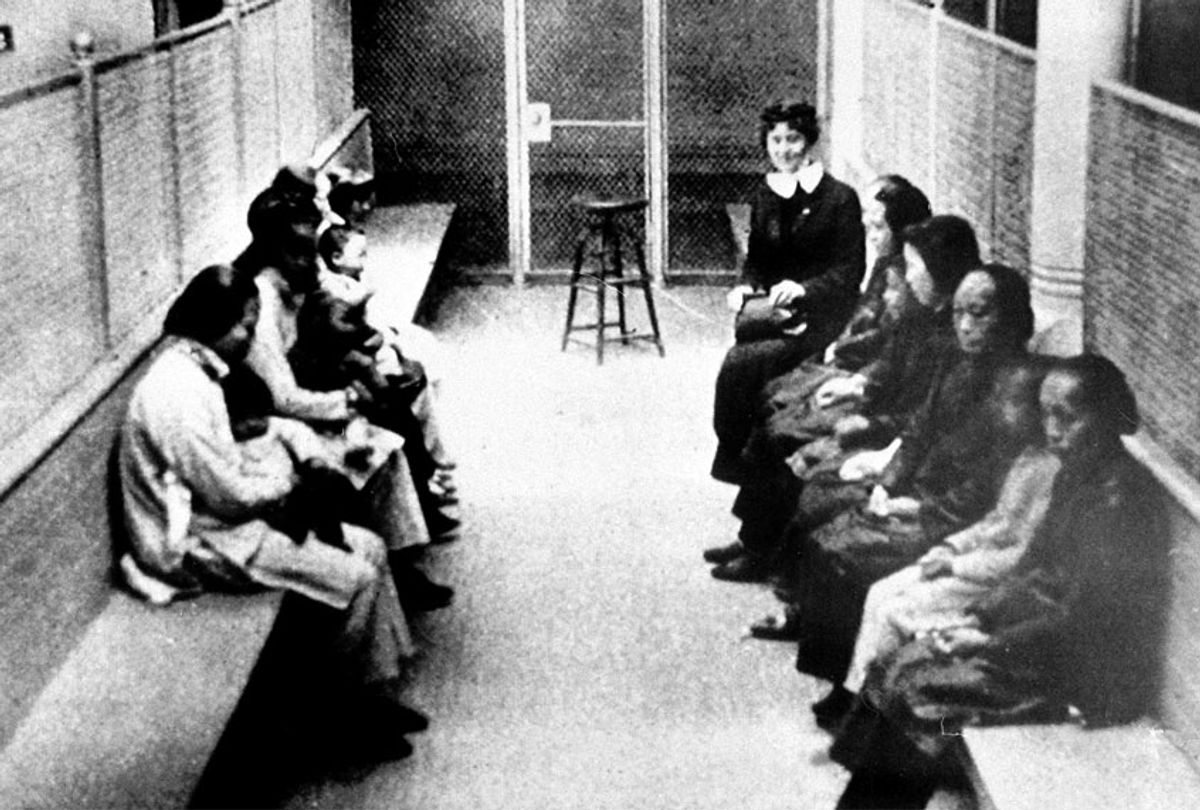 A group of Chinese and Japanese women and children wait to be processed as they are held in a wire mesh enclosure at the Angel Island Internment barracks in San Francisco Bay in the late 1920s. (AP Photo)
--

Earlier this month, Lee Iacocca, a 20th century American icon, died after a legendary life as celebrity CEO, generous philanthropist, and respected community leader.  Despite his business success, perhaps his most enduring legacy was his work as chair of the Statue of Liberty-Ellis Island Foundation, raising $500 Million and restoring the beauty and luster of the most prominent national symbol of American exceptionalism.

In many ways, Iacocca’s own life mirrored the idealism expressed in those national symbols.  Born the son of a hot-dog vendor in Allentown, Pennsylvania, he helped create the quintessentially American Ford Mustang muscle car and rose to become the President and CEO of Chrysler Corporation.  But growing up as Lido Iacocca in an immigrant family from San Marco, Italy, he heard bigoted slurs targeting Italian Americans like him.  Perhaps he even heard insults often shouted by schoolyard bullies, “go back to your own country.”  We know this is a possibility because we continue to hear such slurs today littering hate-filled web sites and divisive tweets .

As leaders of organizations entrusted to tell the story of new Americans, we share a belief that our national identity is best understood and appreciated through the stories of yesterday’s immigrants whose lives have shaped our history and whose journeys are revisited by immigrants today.  Our work provides a potent reminder that, as a nation shaped by immigration, our brightest hope for the future lies in the lessons from the past.

Today, few of the new immigrants have Italian-sounding names.  They are more likely to be a Chao, or a Singh, or a Sotomayor. Looking and sounding a little different, these immigrant Americans, as well as their American-born descendants, are often perceived and presumed as “perpetual foreigners,” forever excluded from becoming an unhyphenated American, assumed loyal to another homeland.

While Steve Jobs was acclaimed as the great American technology visionary, we never heard him labeled Syrian-American although his father was a Syrian immigrant. Irish-American poet Eavan Boland, professor of English at Stanford University, talked about hyphenated identity earlier this year.  An Irish immigrant, she splits her time between Palo Alto and Dublin, and when asked whether she was Irish or American, she responded, to the delight of the audience, that she wants people to see her as wholly Irish.

She could just as easily have chosen wholly American, because the stereotypical image of an American is someone who looks like Boland. The choice to be accepted as an unhyphenated American is something that she and second- or third-generation European-Americans have.

Sadly, this is not a choice given to a third-generation Japanese-American friend of ours, who despite feeling American in every sense, has an appearance that carries the story of a Japanese immigrant a century ago.

Our hope continues to be, in reminding how America moved past anti-immigrant fears in the 20th century, that we do not repeat the same mistakes in the 21st, and that his daughter should never fear the return of internment camps.

We look at those internment camps on the West Coast, the tenements of New York, and the detention barracks on Angel Island as poignant reminders of mistakes made when a young country was still learning to become a great nation. In the future, will we recognize the same mistakes when we revisit the new immigrant tenements and detention camps of today?

In our ongoing and imperfect quest for the more perfect union, we Americans continue to struggle with our differences that separate us.  We are a people of different religions and races, a people with different cultural, regional, or national backgrounds.  We can be different and be proud of those differences. Yet throughout this struggle, we all claim America as our own country.

That is what our history at the Tenement Museum, the Japanese American National Museum, and Angel Island tells us.  That idealism, more than our wealth, power or military might, is what makes us American.