Amazon's "The Boys": In this rowdy exploration of superhero backlash, anger is also a superpower

We may not be done with comic book heroes, but we may be ready for the regular guy to knock them around for once 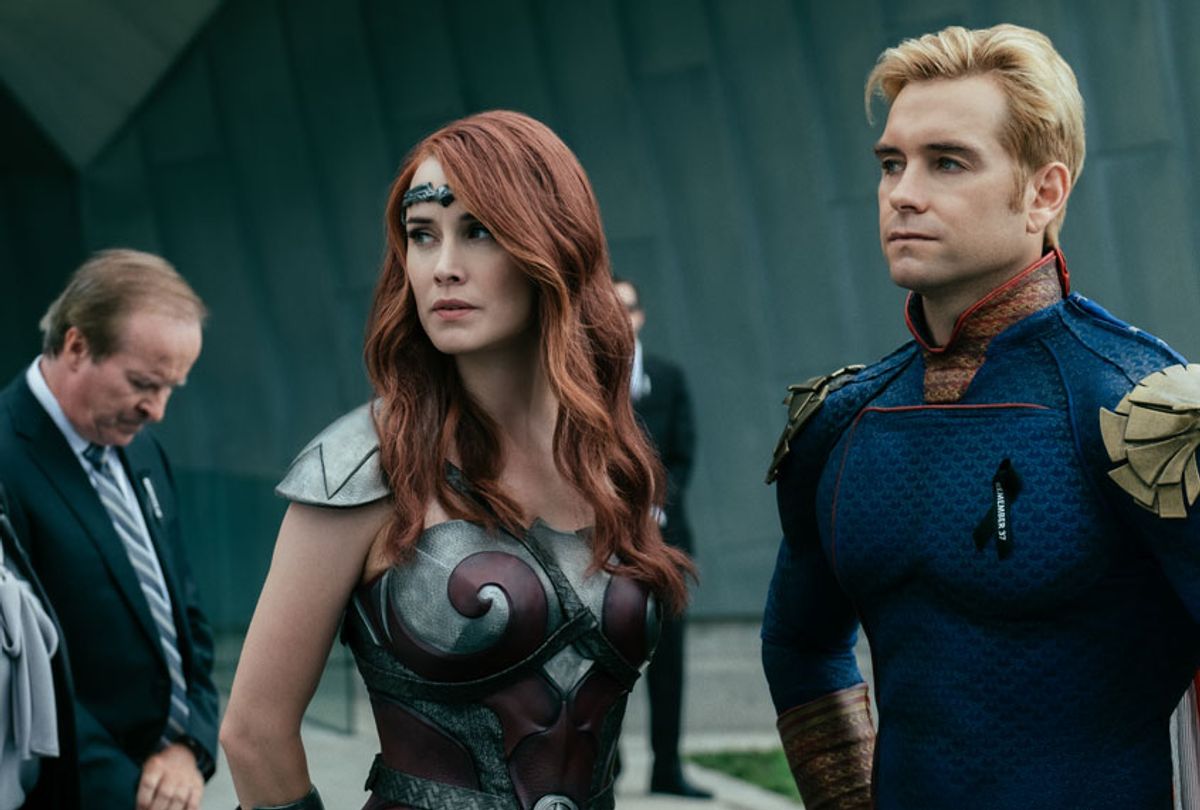 Asserting that we’ve reached that nebulous saturation point referred to as “peak superhero” has been a popular thinkpiece thesis for many years now. It’s also wishful thinking. Time and again the box office returns for superhero films prove that we’re not over them quite yet.

We may have reached the end of Marvel’s Infinity Saga, but various Comic-Con announcements in San Diego, and the enduring and expanding popularity of Comic-Con itself, underscore that we aren't going to see the last of Marvel’s or DC Comics’ mightiest for some time.

And yet the anticipation surrounding “The Boys,” the wildly fun eight-episode action series debuting Friday on Amazon Prime, shows how ripe we are for a rowdy, timely critique of our obsession with comic book heroes.  Based on best-selling comic by Darick Robertson and Garth Ennis, known for co-creating “Preacher," “The Boys” scrutinizes the binary, largely uncritical nature of hero worship in reality and in our fantasy fandom.  It posits that humankind’s tendency to buy the vision of might equals right, to assume most powerful, god-like beings would err on the side of being benevolent aides and protectors, is dangerous and naive.

So it follows that the true hero squad in this universe that so closely resembles our own is a team of humans pushed to the fringes, led by a grizzled mercenary called Billy Butcher (Karl Urban) who relies on tenuous partnerships with tweaky chemist and ballistics expert Frenchie (Tomer Capon) and a former military comrade who works with juvenile delinquents named Mother’s Milk (Laz Alonso).

The villains-as-heroes gimmick is nothing new (see: “Suicide Squad”) but the paradigm at work in “The Boys” isn’t that Butcher and his partners are evil or pure or even guided by the “correct” reasons. They’re not as interested in righting wrongs as they are in evening the score a little bit — which, statistically speaking, is impossible.

Ennis and Robertson published the first installment of “The Boys” in 2006, near the close of George W. Bush’s administration, pre-Great Recession. Concepts such as late capitalism weren’t being bandied about in mainstream conversations about politics and culture.

Few people would have guessed the corporate-influenced ride that is our democracy would fly so far off the rails as it has — few, that is, other than political and economic theorists or artists who speculate about the worst that could happen, then illustrate those fantasies for us.

Even if the comic’s parallels to the current condition of the world are somewhat unintentional, “The Boys” relevance is indisputable, and far more pointed than the political morality at the center of 2016’s “Captain America: Civil War” or the DC Extended Universe film “Batman v Superman: Dawn of Justice.”

Those two titles revolve around the tension surrounding and clashes resulting from governed authority versus the innate morality, of litigating what is right and just. “The Boys,” in the meantime, only examines righteousness via the perspective of a couple of characters, instead presuming that everyone is dirty and the only difference is that a select few are endowed with the might, wealth and power to bury anyone else they see fit.

That anger is not unfounded; in this world, superpowered beings aren’t noble or even genuinely heroic. The top superheroes in the world, The Seven, are managed by multi-billion dollar corporation called Vought and handled by unscrupulous, profiteering VP of Hero Management Madelyn Stillwell (Elisabeth Shue).

Madelyn is a working mother in every picture of the term, coddling the underdeveloped maturity of her male superheroes with the same efficiency with which she pumps at the office desk. She’s very good at pretending to care about people while only truly protecting her own interests.

Hughie (Jack Quaid), the story’s main protagonist, discovers this by way of a terrible accident when he loses his girlfriend suddenly and carelessly at the hands of a member of The Seven. Vought approaches him not with a true apology, but a half-hearted expression of regret and a $45,000 check to buy his silence. Butcher also makes Hughie an offer to join his crusade, and Hughie accepts somewhat reluctantly ... but only at first.

The series presents all of this — the horrifying accident, the dark aftermath, Vought’s amorality and Hughie’s escalating rage — with a heavy dose of cheek and black humor. That tone only amplifies once the viewer is allowed entry inside Vought headquarters, where The Seven holds court in a corporatized version of the Hall of Justice, led by Homelander (Antony Starr), Ennis’ dark twin to DC’s Superman.

Starr plays Homelander with tense veneer of practiced charisma. He flies, has X-Ray vision, shoots laser beams from his eyes, and does it all while smiling brightly and making all the right public statements, a favorite tactic being to call the people he’s saving "the real heroes."

At his right hand is the Amazon-like Queen Maeve (Dominique McElligott), and they're partnered with fastest-man-on-Earth A-Train (Jesse T. Usher), the hilariously monikered Black Noir (Nathan Mitchell) and The Deep (“Gossip Girl” star Chace Crawford), the Aquaman stand-in who, in this world, is actually as useless we once pictured an underwater hero to be.

Under Vought’s production direction, the Seven are unstoppable, noble, beyond reproach and the reach of the law. Their every public act is meticulously played, soft-scripted and filmed. Each is attached to their own series of endorsements and entertainment franchises. Showcases of their abilities are monetized as sporting events. With great power comes very lucrative financial opportunities: “Gods are pure and they’re perfect, and they’re above it all,” Stillwell coos to a minion. “And they need to stay that way.”

Predictably a few other adages not attributed to Stan Lee come into play, like “absolute power corrupts absolutely.” Homelander is the perfect politician cloaked in an American flag and parroting phrases about duty and goodness. He’s also utterly contemptuous of every being who isn’t super-powered, even babies.

And his disdain for normal people infects every other member of the Seven save for its newest member Annie, who goes by Starlight (Erin Moriarty). Annie is the stereotypical girl-just-off-the-bus from the Midwest, eager to save the world and protect the innocent.

Her illusions about heroism are almost immediately shattered upon meeting other members of the team who disappoint her in every way imaginable — including Maeve, the only other woman on the team.

The comic book industry in general has a troubled, flawed history with sexualizing female characters and its depiction of sexual violence, and a share of that is evident in Starlight’s arc, one that originated on the page a decade ago. Ennis intentionally pushes the envelope with regard to sex and violence in his work, so to some extent this isn’t surprising. But an early incident in particular still makes the stomach turn, even though that pivotal moment occurred in the comic book.

Arguably showrunner Eric Kripke (who created “Supernatural”) tempered the approach to her storyline as well as that of Maeve and Madelyn as far as he could, and Moriarty never portrays Starlight as unbearably naïve, weak or a victim; as Vought exploits her fresh meat status on the team, the actress is allowed to be in on the joke, pushing back at every turn.

Maeve and Madelyn also are humanized as the series moves on — more so than the male superheroes, who Kripke and the writers take steps to depict as moral weaklings underneath the trappings of power. Then again, there’s also a wild child figure identified as The Female (Karen Fukuhara) who is basically a feral mute and a viciously lethal addition to The Boys, but more of a ward than a partner.

Amazon already picked up “The Boys” for a second season, a nod to the sustained potency of the superhero genre and this title’s potential to build a small screen franchise. There’s certainly room for that; Marvel’s has ended its Netflix series and is concluding “Agents of S.H.I.E.L.D.” in the summer of 2020. On The CW, “Arrow” is ending its run this fall with a shortened 10-episode arc.

These are classic superhero titles, or extensions of them. But with  “The Boys,” Amazon must be counting on the appeal of anger as its own superpower, sustained and renewed by the times we live in. It’s not wrong on that count and in the moment, it feels exhilarating and fitting. You gotta wonder how long that buzz will last.