On their "Wheels of Soul" tour, the blues-rock band proves they're one of the best on the road 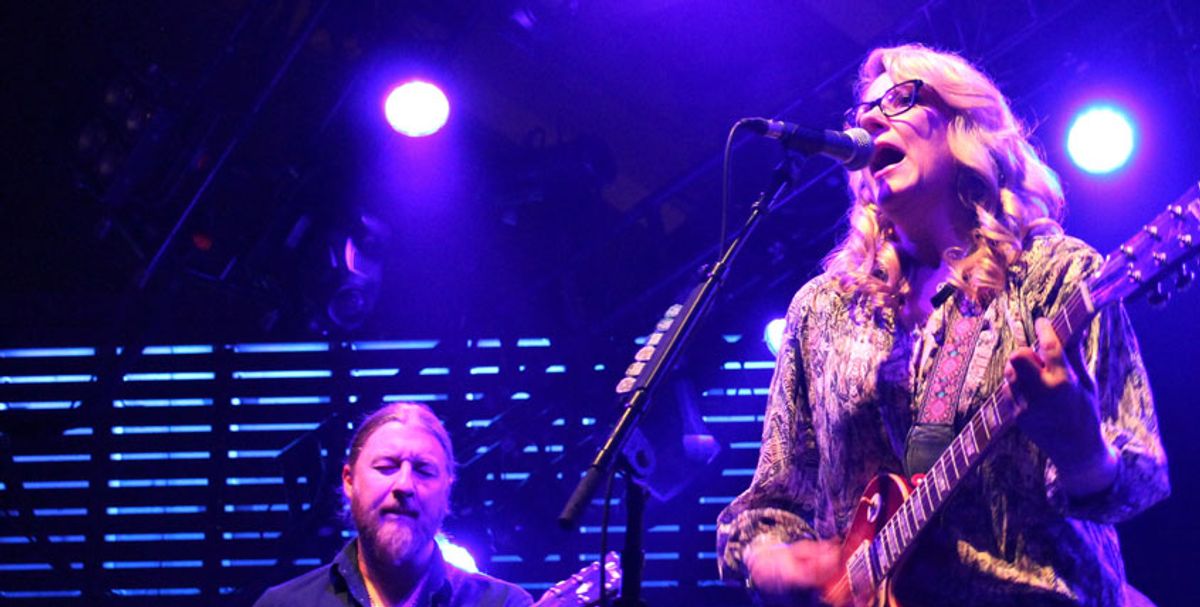 The music of Tedeschi Trucks Band is nutrition for the spirit. When digital enhancements and alterations have conquered the mass market of American music, Susan Tedeschi, one of the world’s best blues and soul singers, and her husband Derek Trucks, one of world’s best blues and rock guitarists, use their songwriting prowess and their performative passion to lead a 12-member band through a house of musical mirrors. From the vantage point of Tedeschi Trucks, blues morphs into soul, soul shapeshifts into rock, and rock deconstructs into a dynamic form of jazz improvisation. Their aptly named summer tour, “Wheels of Soul,” featuring opening bands Shovels and Rope and the current standard-bearers of Southern Rock, Blackberry Smoke, transgresses all boundaries, managing to move with a dynamism and creative daring possible only with the organic navigation of the human mind, hand, and voice.

Technology has allowed music, and other forms of art, to become more sophisticated in design sensibilities. The cleanliness of recorded songs and the guarding against anything unplanned in live performance has transformed a craft that once relied upon balancing compositional and momentary achievement into an algorithm of elite programming tools. The results might sound good on occasion, but some bands and artists continue to present indisputable evidence that there is no competition for human creativity. Jerry Garcia once cautioned The Grateful Dead, as they became more masterful of their music, that if they didn’t make at least one mistake over a three-hour performance, they “didn’t play a real show.”

It isn’t the bad note that makes the show great, but the band playing with sufficient sense of adventure to risk a bad note that has the potential to make the show great. Outside of magician school, it is impossible to make magic under the imposition of structure. Allen Ginsberg believed that formal education is useful to the poet to the extent that it allows him to internalize literary method so that he can artistically express his feelings without pausing to think about how to do it. The process becomes automatic.

Tedeschi Trucks Band makes music according to Ginsberg poetics. They transmit the frequencies of the heart, and the transmission happens without any cumbersome intermediaries.

“Today is the 20 year anniversary of the day Derek and I met,” Susan Tedeschi announced from the stage at the July 21 show in Aurora, Illinois. The crowd cheered as much for the romantic notion of love and marriage as for the artistic child that they have conceived. Derek Trucks, former guitarist of the Allman Brothers, who as a child prodigy was playing soaring solos on stage with professionals at the age of 12, and his wife, who in any other band would also serve as the lead guitarist, have released four studio and two live albums, playing with two drummers, a full horns section, a keyboard player, a bassist, and three backup vocalists.

The presentation of blues, rock, soul, and jazz is big, absorbing influences from BB King’s live records, the Allman Brothers Band, and Joe Cocker and Leon Russell’s “Mad Dog and Englishmen.” Despite its sheer size, it is never large enough to become small in the soft style of so many Las Vegas acts where each additional musician squeezes some substance out of the song.

A Tedeschi Trucks Band performance maximizes the emotive resonance of music by walking the tightrope between virtuosity — these are profoundly talented musicians — and authenticity. In Aurora, Trucks played many guitar solos that stretched the limits of the instrument, causing the capacity crowd to scream and stand in awe, but his playing never veered into the territory of self-aggrandizing exhibition. He, like his bandmates, finds his place in the song, summoning all his power and dexterity to spotlight the emotion of the music, rather than himself.

Susan Tedeschi’s own guitar solos are outstanding in their unpredictability, but it is her vocals that shine with the most intense illumination. She sings and shouts the blues according to what critic Albert Murray defined as “stomping the blues.” The genuine and effectual blues singer, as Murray explained, not only identifies the problem through her song, but with her delivery of the song, offers a means to overcome the problem.

Art does nothing of value — it isn’t even art — if it does not communicate the heights of human potential. To see twelve people cooperate on a shared stage, making music according to plan by staying within the structure of their songs, but also without a plan by breaking out of that structure to improvise and jam moment to moment, bequeaths to its audience not only entertainment and fun, but also the rarity of inspiration.

During their 1 hour and 45 minute show in Aurora, Tedeschi Trucks played four covers: Dr. John’s “Walk on Gilded Splinters,” A Sly and The Family Stone medley, BB King’s “How Blue Can You Get,” and a show stopping rendition of the blues standard, with special guest Charlie Starr of Blackberry Smoke, of “Key to the Highway.”

The apex of the evening was a mid-set stretch of mostly original songs, placed and performed together with immeasurable musical intensity that acted as a commentary on the context of the concert — the American context in which democracy appears in danger, the commonweal is under assault, and honesty is a political liability.

After a raucous quartet of rock and roll songs, Tedeschi Trucks slowed down to perform their beautiful and melancholic ballad from 2013, “It’s So Heavy.” Tedeschi and the backup vocalists gave soulful rendition, dripping with tears, as they sang of ecological destruction, and the prevalence of political cruelty. “Oh, it’s so heavy…” Tedeschi cried out in the chorus, giving artistic emphasis to the exhaustion that is inevitable when hearing the bad news of climate crisis and man made calamity. It was one of the more straightforward performances of the night. Without any extended jams or wild solos, it was a plaintive appeal for compassion, solidarity, and sensitivity to the suffering bad policies and political apathy creates.

The next original song from Tedeschi Trucks was “Don’t Know What It Means,” a funky and fast paced lament of life’s intractable mysteries. Truth is tough to grasp, and impossible to hold steady. A cacophony of confusion swirls around our atmosphere, and “Don’t Know What It Means,” for most of its musical life, expresses its frustration with whimsy. The horns provided a foundational line, Trucks played fiery solos as if to disrupt the foundation of rhythm section and horns, and Tedeschi shouted her trouble to a listener as unknowable as the sky:

The song brown down into vocals over drums and bass. Tedeschi’s singing became more ferocious, as if strength of will could melt down the obstructive barriers to clarity. The performance, especially on the heels of “It’s So Heavy,” almost became theatrical – an improvisational jam signifying the search for answers in a world full of challenges and questions. Tedeschi would have to surrender. “Don’t Know What It Means” deconstructed again into a spacey working of Miles Davis’ “Bitches Brew” and “On the Corner.” After a chaotic sax solo, all the horns began playing against each other — muffled and interrupted. Trucks played low notes on his guitar without any melody.

Similar to those Miles Davis’ records, the “Don’t Know What It Means” jam straddled the line between music and noise – disorienting the audience so that they don’t know what they are hearing or where the thing is going. It was the sonic representation of the “post truth” culture. When Davis revolted against the structures of his genres, he was attempting to delineate the aural architecture of freedom. In 2019, the Tedeschi Trucks reference to Davis’ brilliance signaled something more ominous. When all standards of evaluation give way to prejudice, conspiracy theory, and cults of personality, chaos is not an abstraction of artful exploration, but a demonic threat stepping on every shoulder.

The spikes and dips in Tedeschi Trucks’ performance is nothing short of exhilarating, and with a seamless transition, the band would take their inspection of cultural darkness even further into the cavern. The horns and Trucks transition, with barely a second of space, from “Don’t Know What It Means” into one of their new rock songs, “Shame.”

Trucks played with anger, and at lightning speed, in his solo, and Tedeschi sang, with all possible muscularity, that “they’re murdering the truth,” screaming out to God, more pissed off than prayerful: “Makes me wonder / Why we’re broken / Lord, you have to wonder / Where we’re going?”

The song ended with Tedeschi reaching for higher and higher notes as she bellowed the word, “shame.” Her simple, and yet profound commentary on the moral decay of American institutions and culture needed no further explication. With the band behind her, it was an earthquake of outrage.

“Key to the Highway” with Charlie Starr followed, and Trucks, Tedeschi, and Blackberry Smoke’s lead singer and guitarist traded solos with enough energy and rage to rival the Derek and the Dominoes’ version with Eric Clapton and Duane Allman. The injection of anger into a song about finding comfort in the open road provided a dark cartography of the American terrain, but not one without hope.

To follow “Key to the Highway,” Tedeschi Trucks Band reached into their early years to find an antidote for the murder of truth, and the societal shame it has wrought. A 12-minute performance of “Bound for Glory” featuring solos from all three backup vocalists — Mike Mattison, Mark Rivers, and Alecia Chakour — offered the promise of a better day around the bend of darkness. Susan Tedeschi sang with the certitude of a preacher behind her pulpit — “The sun comes struggling on / Yesterday’s dead and gone / Can you feel it? / Bound for glory.”

Craig Werner, author of “A Change is Gonna Come: Music, Race, and the Soul of America,” writes that the “gospel impulse” is the “belief that life’s burdens can be transformed into hope.” It is also what enables people “to experience themselves in relation to each other,” which makes the separateness of the blues bearable.

When Tedeschi Trucks moves from the blues into gospel, they showcased a combative spirituality. Their musical ability and avidity became weapons in the war against that which weighs down on the spirit. It was not only a thrilling performance, but sustenance from a human source in a cultural climate where the very notion of humanity is under attack.

Tedeschi Trucks gives its audience a largely improvisational, jam heavy dosage of funk meets soul, jazzy blues based rock and roll, but for anyone who believes that the human spirit is unbreakable, creativity can conquer commodification, and the freedom we imagine when we hear beautiful music is accessible they give something even more essential: Affirmation.