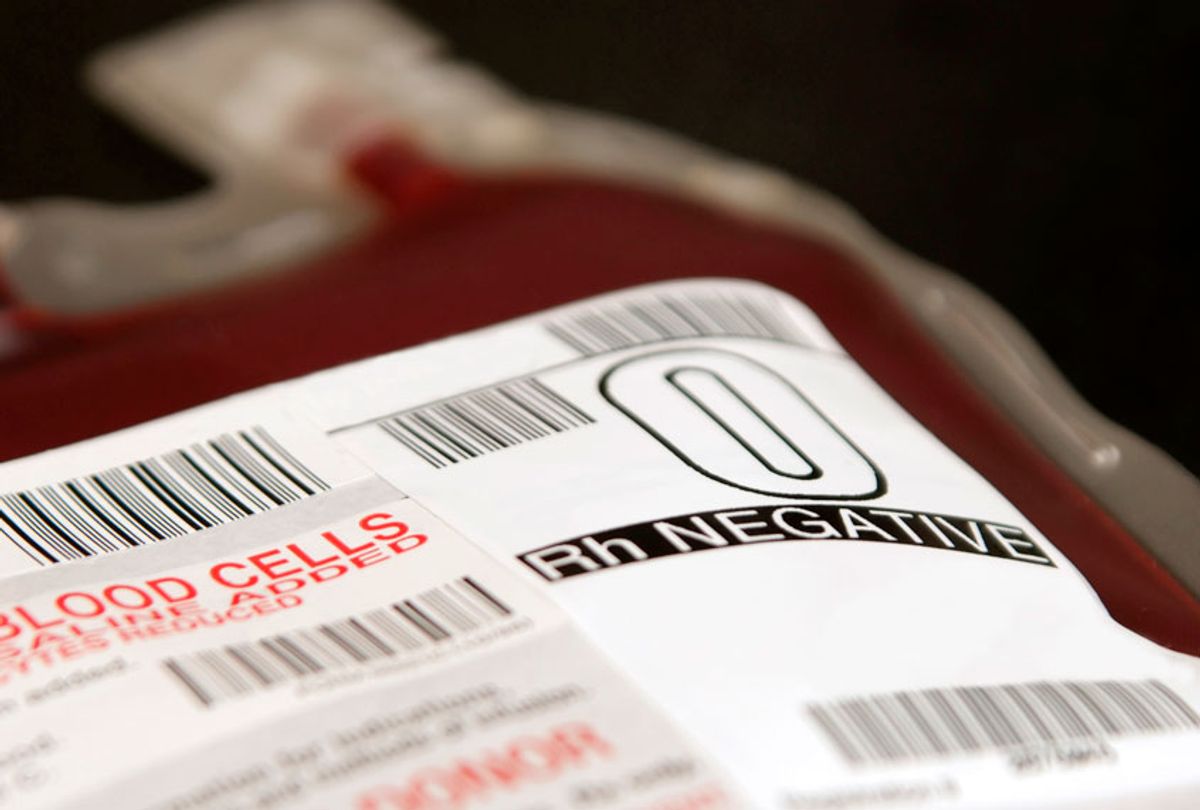 Hospitals always need blood. Transfusions save lives after emergencies, as well as during chemotherapy, and during the treatment of long-term illnesses. The American Red Cross estimates that someone in the US needs blood every two seconds. And while millions of people do donate regularly, patient access to blood supplies can be limited by blood type.

There are four distinct human blood types. Blood cells display complex sugars called glycans on their surfaces, and these vary in the individual sugars they contain and how they are linked together. The glycans you have on your blood cell surfaces determine your blood type. These glycans are recognized by your immune system, whose job it is to find and destroy intruders. This is why the glycans are often also referred to as “antigens,” molecules that can trigger an immune reaction in a person who does not naturally produce that substance. Put simply, type A blood cells carry the A antigen, type B cells carry the B antigen, type AB cells carry both, and type O cells carry neither.

When someone receives a transfusion, they can only receive blood cells their body is able to recognize. Because it lacks any cell-surface glycans, type O is considered a “universal donor” blood, because it does not trigger an immune response from A or B type patients. Type O blood is the most common in most countries, found in around 45 to 55 percent of people, but available supply is still not nearly enough to satisfy demand.

This is why blood drives are always looking for more type O donors — but what if there were a way to convert all blood types into type O, by removing those pesky glycans from the blood cell surfaces? Scientists working at the University of British Columbia (UBC) in Vancouver, Canada may have found a way. A group of biochemists led by Stephen Withers have found a simple enzymatic pathway that can be used to directly convert type A into type O blood. This study was led by post-doc Peter Rahfeld, who discovered the enzymes that work together to very efficiently remove the A antigen.

The idea of using enzymes called glycosidases with this kind of sugar-removing activity in order to create universal donor blood is actually quite old. In the 1980s, a team of researchers led by Jack Goldstein and Lilian Reich at Cornell University Medical College and the Memorial Sloan-Kettering Cancer Center found that a well-known α-galactosidase enzyme – isolated from coffee beans – could be used to remove the sugar that defines type B blood cells. They also showed that a type B patient’s blood cells could be enzymatically treated and returned to their veins. This process created blood that could then be transfused into type A and type O humans, with no harmful side effects. The cells were able to carry oxygen in the normal way, maintain their correct shape, and survive for the normal expected lifespan of a blood cell.

Their technique of using enzymes to make type O blood would increase the amount of universal donor blood available. This early research was a huge breakthrough, but the technology never reached the clinic. The activity levels of the enzyme were low, so huge amounts of enzyme had to be added to blood cells to convert them. As enzyme production is expensive, this made the cost of the treatment very high. Over the next few decades, other examples of new enzymes with similar activities were found. Many showed initial promise for blood conversion, but ultimately none proved suitable, often because of the large amount of enzyme required pushed up the price.

In response to these setbacks, some research groups, including the UBC researchers behind the new paper, have had some success in engineering blood group glycosidases to be more active, or more flexible in the types of glycan they can remove.

In 2009, a collaboration of Canadian scientists discovered that the human bacterium, and sometime pathogen, Streptococcus pneumoniae produced an EABase enzyme, so-called because of its ability to remove both the A and B type antigens. This enzyme was efficient, but could only work on antigens linked to the cell surface in very specific ways. In 2015, the Withers lab at UBC published a paper describing the engineering of the S. pneumoniae EABase to make it work in more contexts. They used a process called directed evolution, where successive small changes are introduced to an enzyme’s structure to alter its activity or stability. The researchers were able to increase the reaction rate of the EABase by almost 200 times on certain glycan linkages, but its ability to remove antigens never reached 100 percent, leaving a small but still potentially deadly amount of antigen on the blood cell surface.

So, despite some success, the resulting enzymes were still not useful in the real world. That’s why the Withers lab decided to forget about introducing incremental improvements into the old enzymes. Instead, they went back to nature to find new enzymes that just work better. By collaborating with colleagues in the UBC ecology department, the scientists began searching for brand new enzyme targets with potentially useful activities. Because they were looking for blood-degrading enzymes, their first instinct was to search in mosquitoes and leeches, creatures that feed on blood and therefore must be good at breaking down blood cells for nutrition. They also searched in the human gut microbiota, a complex microbial community that many scientists believe must contain vast numbers of useful new enzyme functions. To find what would work best, they used a metagenomic approach that let them examine the enzymes produced by millions of microbes, screening for useful activities using a rapid new assay they had developed.

After some initial frustration, they eventually identified a pair of enzymes that work brilliantly together. The enzymes are produced naturally by bacteria found in the human gut, and were identified from a fecal sample from a man with AB type blood. Gut bacteria normally help us digest the complex carbohydrates in our diet. But when they don’t have much else to eat, these bacteria can use the glycans on the surface of our intestinal cellsfor nutrition. These glycans are structurally very similar to the blood group sugars, and so the researchers decided to try using mucin-degrading enzymes to remove blood antigen sugars too.

These human gut enzymes are useful because, unlike previously described enzymes, they are highly active, and they work in moderate temperatures. They are effective on whole blood because they contain protein domains that bind to the carbohydrates on the surface of blood cells — this means they stay in contact with the cell for a long time, giving them the chance to cut off a lot of antigen. I think this might be one of the most impressive single discoveries to come from metagenomics so far: The enzyme pathway described in the new study is simple and elegant, and is immediately applicable for use in the real world. The enzymes may even be stable enough to be directly injected into blood bags, with no additional handling of the blood required!

Within biotechnology research, every few years a new method or approach becomes available that allows researchers to tackle old problems in new ways. In order for enzymatic blood conversion to actually be practical, scientists needed to wait for a tool like metagenomic sequencing, which requires advanced high-throughput screening equipment and computer resources that weren’t available until fairly recently. Thanks to the massive screening and sequencing technologies they could access, the UBC researchers were able to cast a much wider net when fishing for new enzymes than was ever possible before.

Now here we are, with an enzyme 30 times more effective than the one isolated from coffee beans nearly 30 years ago, on the precipice of transforming blood supply and perhaps healthcare as a whole. Of course, there is still work to be done before anyone can receive type O blood produced by enzymes. Clinical trials are needed to verify that the blood is safe for human transfusion. The high activity of the new enzymes makes them economically feasible to use, but the next key challenge will be to verify that 100 percent of the cell-surface glycans are removed, as even a tiny number of A type cells can provoke a deadly immune response in transfused patients. But the researchers are already in talks with the Canadian Blood Service to arrange these trials, and they are hoping to translate their idea into clinical practice quite soon.

In the meantime, if you are eligible to donate, then sign up today! There is almost certainly a blood bank in or near your community. One donation can save three lives, so every drop counts — no matter which glycans you’re carrying.