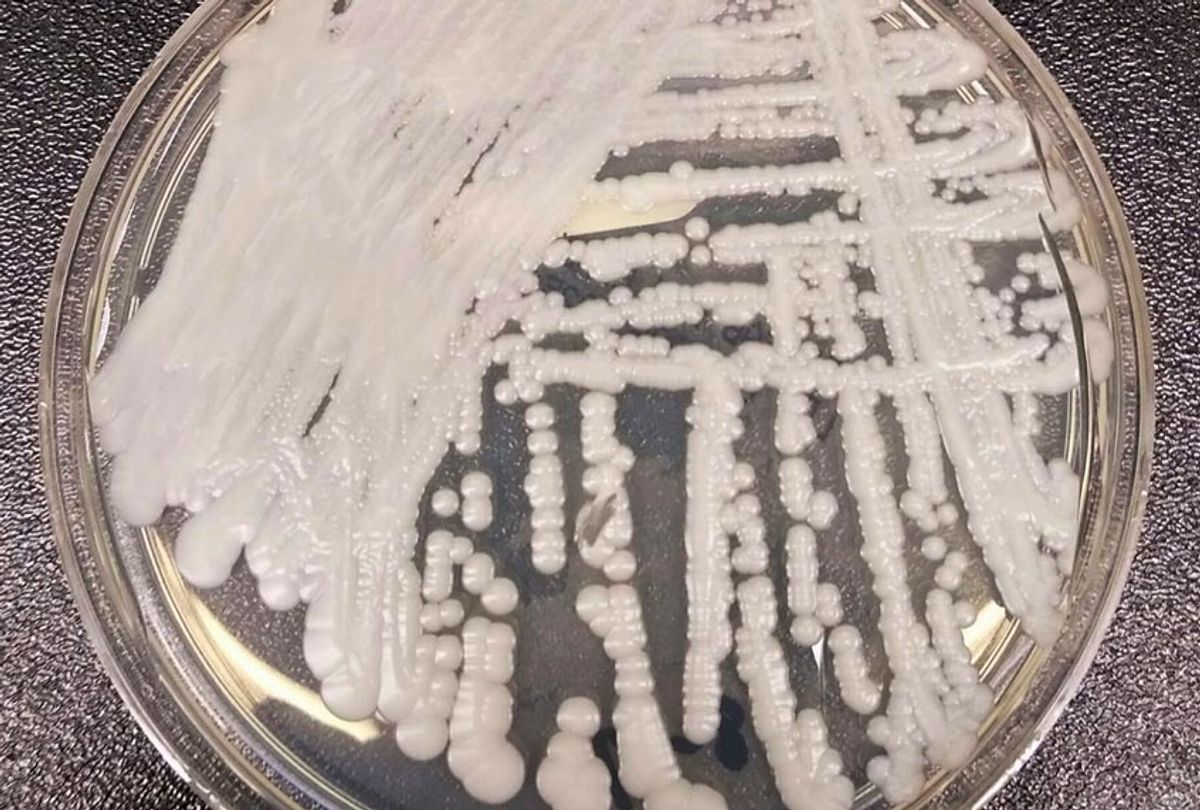 Candida auris in a petri dish at the CDC. (Wikimedia)
--

A new analysis warns that "global warming may have played a pivotal role" in the recent rise of a multidrug-resistant fungal superbug, sparking questions and concerns about the emerging public health threats of the human-caused climate crisis.

Reporting on the research Tuesday, CNN outlined the history of Candida auris:

Until recently, scientists considered it a mystery how C. auris popped up in more than 30 countries around the globe a decade after it was first discovered in 2009. It emerged simultaneously on three continents—in India, Venezuela, and South Africa—between 2012 and 2015, each strain being genetically distinct.

The study — published Tuesday in mBio, an open-access journal of the American Society for Microbiology — argues that Candida auris "may be the first example of a new fungal disease emerging from climate change."

"The argument that we are making based on comparison to other close relative fungi is that as the climate has gotten warmer, some of these organisms, including Candida auris, have adapted to the higher temperature, and as they adapt, they break through human's protective temperatures," lead author Arturo Casadevall, chair of molecular microbiology and immunology at Johns Hopkins Bloomberg School of Public Health, said in a statement.

Stat News published a piece Tuesday that mentions the new study but also addresses a series of pressing questions about the emerging superbug with help from experts who include Tom Chiller, chief of mycotic diseases at the Centers for Disease Control and Prevention, and Tejas Bouklas, an assistant professor in the department of biomedical sciences at Long Island University.

Among those questions is: "Could C. auris help other fungi adapt to be bigger threats to humans?"

That's a question Bouklas is wondering about. "The more ubiquitous it becomes, the more problematic. Because now it could potentially transmit DNA to other Candida species. And maybe even bacteria," she said.

That idea is not far-fetched. Fungi can mate sexually, Chiller pointed out, allowing them to swap large amounts of DNA.

In light of the potential impacts of the climate crisis on public health highlighted in the study, Casadevall charged in his statement that "we need to make investments in better surveillance of fungal diseases."

"We are pretty good at surveilling influenza and diseases that cause diarrhea or are contagious, but fungal diseases are not usually contagious and therefore nobody has really bothered to document them well," he said. "If more fungi were to cross over, you really wouldn't know until somebody started reporting them in the literature."

Chiller, in his interview with Stat News, agreed that more research on the superbug is vital to protecting the public.