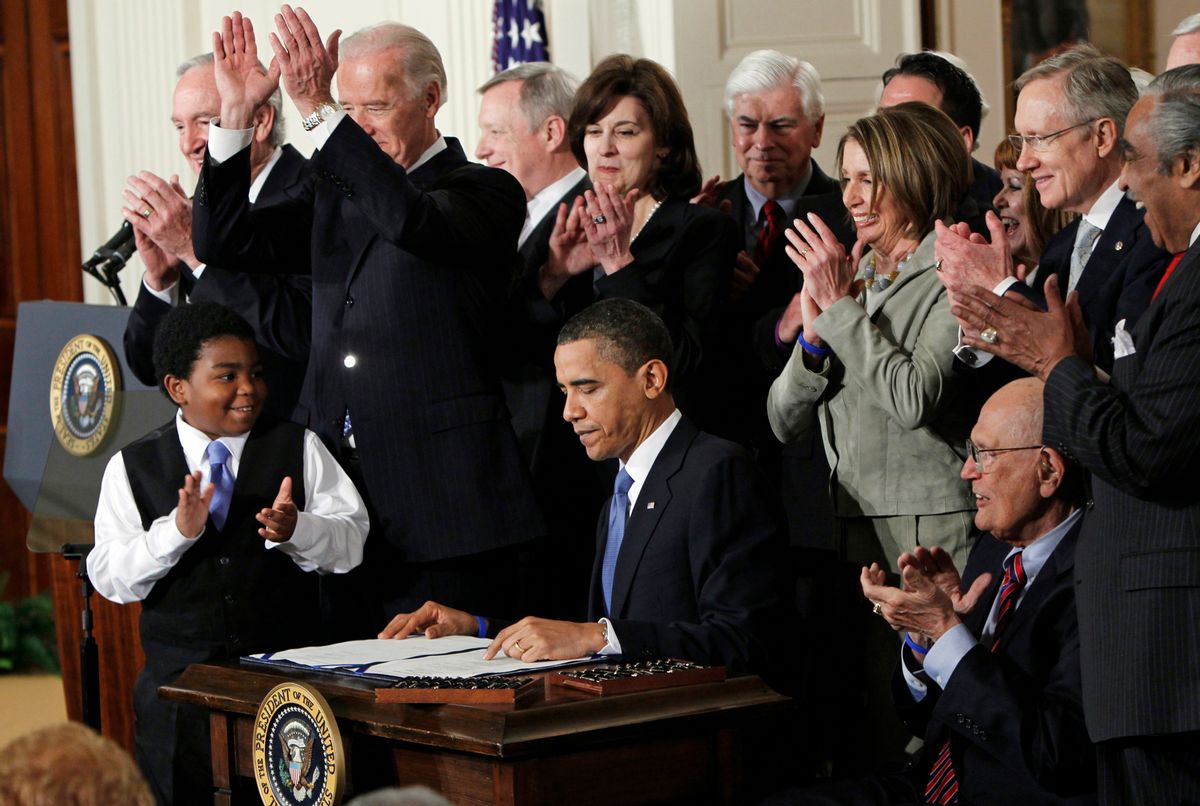 FILE - In this March 23, 2010, file photo President Barack Obama is applauded after signing the Affordable Care Act into law in the East Room of the White House in Washington. (AP Photo/Charles Dharapak, File) (AP)
--

The latest assault on the Affordable Care Act seemed to advance a bit this month when the US Court of Appeals for the Fifth Circuit heard oral arguments in a suit backed by 20 largely red states hoping the courts will do what Congress so far has not: annul the law.

The case, backed by the Trump administration, holds that since Congress has effectively eliminated a pillar of the law — the individual mandate requiring that people buy insurance or pay a penalty — the whole law is inoperable. This assertion relies on the obscure principle of “severability” — that is, whether a law can function if you remove a component of it. If not, the law has to go.

This is precisely the issue that the ACA’s opponents wanted to boil the case down to when they zeroed out the penalty in 2017 and effectively repealed the mandate: a narrow, technical question that might or might not have enough legal merit to get the ACA overturned. It was enough to convince US District Judge Reed O’Connor, who ruled in December from Fort Worth, TX, that the law must be struck down precisely because the mandate is not severable.

There’s a cynical tactic at work here that deserves attention: By getting everyone focused on legal filigree — who has standing, or whether a tax of zero is a tax at all — the plaintiffs distract attention from the big question: why they oppose the law — and in particular the individual mandate — in the first place.

The mandate concept was popularized 30 years ago by the right-wing Heritage Foundation, was once backed by people like former House Speaker Newt Gingrich (R-GA), and is part ofthe Massachusetts healthcare law passed under Republican Mitt Romney in 2006. It exemplifies the bedrock conservative principle that if people can pay their own way, they ought to.

But wait — isn’t it supposed to be those namby-pamby liberals who want to give everything away? Federal law requires Medicare-participating hospitals to provide emergency treatment to anyone who walks through the door, whether or not they’re insured. That allows the willfully uninsured to dump their healthcare costs on other people. To oppose the mandate, in other words, is to promote free-riding. Whatever happened to the party of personal responsibility, and who are the free-lunchers now? And what was all that talk about “takers”? 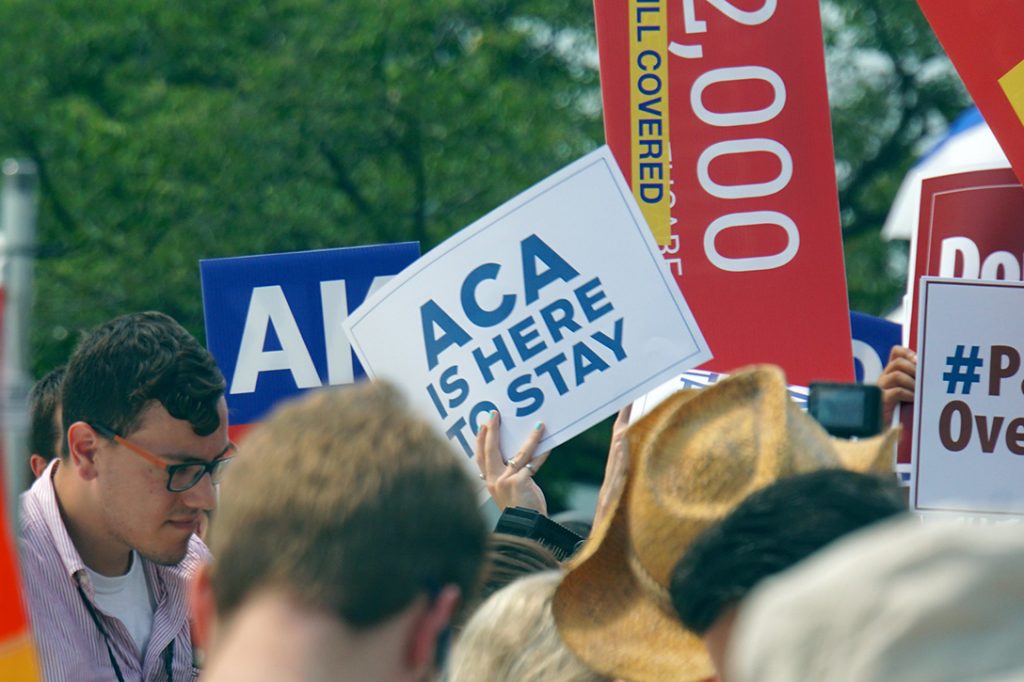 Affordable Care Act supporters in front of the US Supreme Court building on June 25, 2015, the day court upheld the constitutionality of premium tax credits, a pillar of the law. Photo credit: Ted Eytan / Flickr (CC BY-SA 2.0)

Equally baffling is the way ACA opponents blithely overlook the practical argument for the mandate, which was created to benefit insurers. There was a good reason for that: If you’re going to require insurers to cover everyone willing to buy a policy, as the ACA does (the technical term is “guaranteed issue”), it’s only fair to make everyone participate. Otherwise the problem of “adverse selection” saddles insurers with the sickest customers, whose costs are not offset by the premiums of healthier, cheaper customers. The whole point of health insurance is to pool risk so that the healthy subsidize the sick.

And one other little matter that seems to have escaped GOP notice: The law has worked. It isn’t perfect and it certainly isn’t comprehensive, but that’s largely because of compromises that were made at the outset to placate conservatives. It has, however, reduced the uninsured population from about 15 percent to around 10 percent, providing coverage for about 20 million people. That was its primary purpose. Repeal the law now and there is no reason not to expect that millions of people will lose coverage.

Republican opposition to the ACA has always been dubious and tribally partisan. It was largely GOP opposition (abetted by key Democrats, to be sure) that pre-empted the so-called public option and opened the mandate to legal challenge. One argument by the plaintiffs before the Supreme Court in 2012 was that the mandate forced people to buy a commercial product. But that would have been an untenable position had there been a public option. (The Supreme Court salvaged the mandate on that occasion by deeming the penalty a tax that was therefore constitutional.)

The skepticism expressed by the Fifth Circuit judges last week suggests that they’ll follow Texas’s Judge O’Connor and strike down the ACA. In that case, see you in the Supreme Court, which could well ratify those rulings.

If so, prepare for another irony-free ideological flip-flop by the GOP. As attorneys for the 21 defendant states argued in the Fifth Circuit last week, whether one provision of a law is severable from the rest depends largely on congressional intent, and Congress has made its intent clear by keeping the rest of the law in place. Senate Majority Leader Mitch McConnell’s (R-KY) promise to restore ACA provisions forbidding insurer discrimination against pre-existing conditions, should the courts strike down the law, is another sign of congressional intent.

If, therefore, the courts conclude that the mandate is not severable and strike down the whole law, they will arguably be legislating from the bench. Who, then, would be promoting judicial activism?

Outside of the court case, a rising tide of support for Medicare for All further confounds conservative opposition to Obamacare. Private insurers who once opposed the ACA now sayit’s not such a bad thing and that maybe we should work on the flaws instead of replacing it.

What’s more, the Trump team itself apparently doesn’t believe its own criticisms of the law, panning it one day and praising it the next. (This is what’s known in the social sciences as “situational ethics” and in healthcare economics as “lying.”) More broadly, many Republicans don’t really want to repeal the increasingly popular law, but they need to run against it in 2020.

Whether or not this assault on the ACA succeeds, GOP malice toward the individual mandate has already affirmed, if affirmation were needed, that when conservative principles conflict with conservative preferences, principle gets tossed out the window.

In the party of moral clarity, it seems, hypocrisy and opportunism are pre-existing conditions.