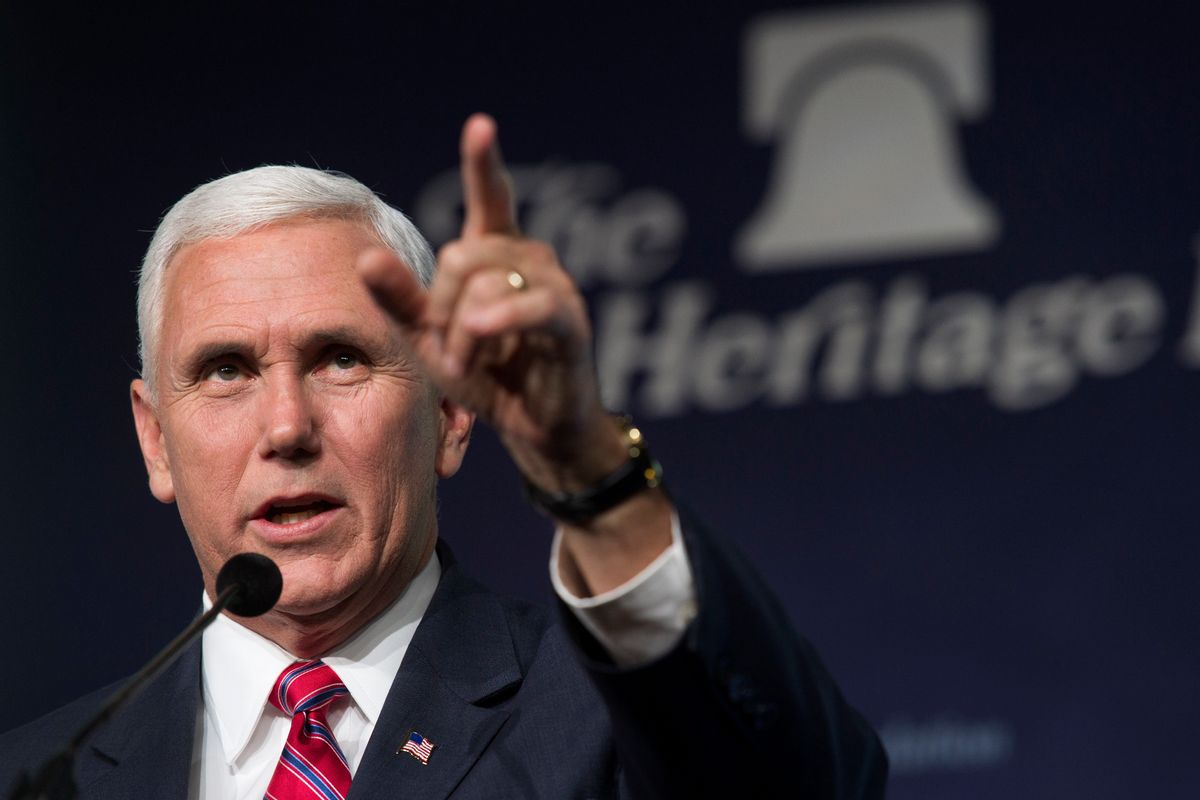 The Heritage Foundation, a very influential right-wing think tank that is “stocking” the Trump-Pence administration, is often treated as a mainstream conservative organization despite holding extreme views on LGBTQ people and promoting harmful conversion therapy, particularly for transgender youth. People associated with Heritage and writing for its media arm The Daily Signal have openly supported the discredited practice, often advocating for it as an alternative to affirming care and acceptance.

Conversion therapy, which is also sometimes called “reparative therapy,” is “a range of dangerous and discredited practices that falsely claim to change a person’s sexual orientation or gender identity or expression.” Leading medical experts and organizations agree that conversion therapy can lead to depression, anxiety, self-destructive behavior, and suicidal ideation. As The Trevor Project’s Sam Brinton has explained, “conversion therapy has never just been an ‘LGB’ issue” but also targets trans and gender nonconforming people."

Heritage has railed against LGBTQ equality for decades, including supporting discrimination against LGBTQ people under religious exemptions, opposing marriage equality, and opposing gay scoutmasters in the Boy Scouts of America. Just this year, Heritage has hosted at least five anti-trans panels pushing misinformation about trans people in an attempt to sway public discourse about trans-inclusive policies like the Equality Act.

Furthermore, Heritage President Kay Coles James recently made news for her anti-LGBTQ history. In April, Google decided to disband its Artificial Intelligence ethics board, which included James, after some protested in part because of her and Heritage’s positions against transgender rights.

In 2007, he authored a column that described a friend who “suffers same-sex attractions” but “doesn't want to” and “seeks to be made whole again." Anderson criticized his friend’s university and health insurance for not covering conversion therapy. In 2012, he touted a New York Times article about “ex-gay” men who believe that conversion therapy helped change their sexual orientation. In a 2018 interview, Anderson amplified the work of discredited anti-trans psychiatrist Paul McHugh and again advocated against protections for LGBTQ youth from conversion therapy.

In 2015, Anderson tweeted his opposition to “Leelah's Law,” a federal bill to protect LGBTQ youth from conversion therapy. The bill was named for trans teen Leelah Alcorn, who died by suicide in 2014. Anderson claimed the bill would "hurt children" despite the fact that major medical organizations denounce the practice as harmful. Promoting his anti-trans book in 2018, Anderson tweeted a video in which he advocated for conversion therapy for trans folks, claiming, “The most helpful therapies focus not on achieving the impossible — changing bodies to conform to thoughts and feelings — but on helping people accept and embrace the truth about their bodies and reality.” In 2017, Anderson tweeted that trans-affirming medical care such as “puberty blockers and cross-sex hormones” were the “actual ‘conversion’ therapy.” He reiterated that false comparison at least twice in 2018.

The Daily Signal, Heritage’s right-wing media outlet, has published several articles sympathetic to conversion therapy. In September, it posted a piece by Peter Sprigg, a fellow at the extreme anti-LGBTQ group Family Research Council, opposing a 2018 California bill that would have recognized conversion therapy as a fraudulent practice. Sprigg wrote that the bill was based on “the false assertion that the sexual orientation change efforts some clients choose to undertake (or ‘conversion therapy’ to its critics) are never effective and always harmful.” Sprigg and FRC have histories of supporting conversion therapy and encouraging legal challenges to such protections.

In November, The Daily Signal published a commentary piece on Boy Erased, a film depicting the true story of one survivor’s experience with conversion therapy. Heritage research assistant Monica Burke wrote that conversion therapy laws “fail to take into account important concerns about individual freedom—particularly the freedom of patients to have access to all available information that can help them.” Anti-LGBTQ advocates like Burke have increasingly framed the subject as a free speech and “freedom of choice” issue, arguing that people should be able to choose conversion therapy to get rid of their “unwanted same-sex attractions.” Burke has also opposed restricting conversion therapy on Heritage’s website, writing that such protections for LGBTQ youth “are not being used to promote equality. Instead, they are being used as a blunt-force weapon to ban disagreement on marriage and sexuality by punishing dissenters.”

On May 15, The Daily Signal published a commentary by Ken Williams, a pastor and founder of a pro-conversion therapy “ministry” who appears to offer religious conversion therapy as “consulting appointments” for “those who struggle with sexual brokenness.” In his The Daily Signal post, Williams wrote that he had sought conversion therapy for “same-sex desires” in his youth and likened measures to protect LGBTQ youth from conversion therapy to “government-mandated gay identity.” He also said, “If counseling bans had been law in 1989, blocking me from the therapy I was asking for, I probably would have killed myself.” Heritage's EmilieKao retweeted the article.

Kao has been a host and panelist on two of Heritage’s anti-trans panels this year and has appeared on Fox to advocate against the Equality Act. She has also compared being trans to having an eating disorder or body integrity identity disorder (the desire for loss of a limb or a sense) to argue in favor of conversion therapy for trans folks. Kao appeared on the June 19 episode of the Issues, Etc. podcast, during which she expressed repeated support for conversion therapy for trans youth instead of affirming care and claimed protections of LGBTQ youth from the practice are “really creating greater risk of harm.”

Participants in several of Heritage's anti-trans panels advocated for trans youth to undergo conversion therapy. A January 28 panel featured several so-called “trans-exclusionary radical feminists,” or TERFs, and other anti-trans figures allegedly “from the Left.” TERFs often refer to themselves as “gender-critical” or “radical feminists,” but they are anti-trans activists who have historically opposed trans-inclusive measures and rejected trans identities. During the panel, Jennifer Chavez, a board member of the TERF organization Women’s Liberation Front (WoLF), read an anonymous letter from the parent of a trans child endorsing the practice of conversion therapy for transgender youth:

Therapists are actively trained and socially pressured not to question these increasingly common identities. In Washington, D.C., and many states with so-called “conversion therapy bans,” just questioning a child’s belief that she is the opposite sex is against the law.

At a March 20 panel coinciding with a session of the U.N. Commission on the Status of Women, Dr. Monique Robles — who brought a veneer of credibility as a medical doctor who focuses on pediatric care — also seemed to endorse conversion therapy:

A better treatment option would be to address the underlying mental health issues and concerns that are likely leading to these children in adolescence to identify as transgender or gender-diverse. There are therapists who are taking on the role as compassionate companions and are actually spending time with their patients and parents working through history, experiences, and addressing the whole of the individual. In this form of therapy, the body, mind, and soul can be brought together in a unified manner in which they were created.

And during a March 28 Heritage panel hosted by Anderson, Dr. Michael K. Laidlaw — an endocrinologist and vocal anti-trans advocate featured in several right-wing outlets — claimed that trans kids can “grow out” of their trans identity with the help of therapists, saying: “Most of these kids, as Ryan said, will actually grow out of this condition, either through watching and waiting or help from a therapist or psychologist.”

A common thread among Heritage's anti-trans panelists is the denial of trans identities and the argument that they stem from mental illness — a core belief shared by proponents of conversion therapy, who claim that trans identities can be forcibly changed to cisgender. For example, several panelists deadnamed and misgendered trans folks, repeatedly calling trans women “biological males.” Deadnaming is referring to a transgender person using their “birth name” or “given name” rather than the name which they identify with. Like misgendering, which is when one labels someone “as a gender other than one that a person identifies with,” deadnaming is a disrespectful practice that invalidates a trans person’s identity.

Media often give Heritage’s staff and others associated with the group a platform that paints it as a mainstream conservative organization and ignores its anti-LGBTQ animus. Heritage in turn boasts of media appearances on individual staff bio pages and in email blasts to supporters.

Fox News is a particularly friendly platform for Heritage staff and associates to discuss LGBTQ issues. Just this year, Fox has hosted James and Kao, and the network has also boosted the profile of several guests who appeared as panelists at anti-trans Heritage events.

Heritage staff have also been featured on TV news outlets such as CNN, CBS, and MSNBC, among others, often to discuss policy issues like foreign affairs, trade, and the economy. A Media Matters analysis found that between August 2017 and the publication of this report, Heritage staff appeared on CNN at least 33 times, on MSNBC at least 10 times, and on Fox News at least 102 times.

Print outlets have similarly covered the group without contextualizing its extreme views, treating it as a mainstream organization because of its close ties to the Trump-Pence administration. For example, The New York Times uncritically quoted Heritage’s Anderson in an article about a Trump executive order on religious freedom in May 2017, describing him as “a senior research fellow at the Heritage Foundation who specializes in religious liberty.”

A 2017 report in The Washington Post highlighted Heritage’s influence on the Trump-Pence Office of Management and Budget, writing, “The Trump budget proposal released last week bears a striking resemblance to the Heritage Foundation’s ‘Blueprint for Balance: A Federal Budget for 2017." The report called Heritage “one of the nation’s most conservative think tanks” but focused on its more severe economic positions. This July, The New York Times reported that OMB Director Mick Mulvaney said at a Heritage event “that he often joked that the White House budget office was now under the conservative think tank’s management.” The outlet did not provide more detail on Heritage in that story.

As Heritage ramps up its anti-LGBTQ advocacy, media should contextualize its support for conversion therapy, which is just one example of the group’s extreme views on LGBTQ people. Heritage and those associated with it have denied overwhelming medical consensus on trans-affirming medical care and opposed inclusion for the LGBTQ community. Instead, the group has repeatedly promoted a discredited and harmful practice while purporting to know more about LGBTQ people’s identities than they do. Media should make sure their audiences are aware of this when profiling the group or inviting its staff and those associated with it to discuss LGBTQ issues.